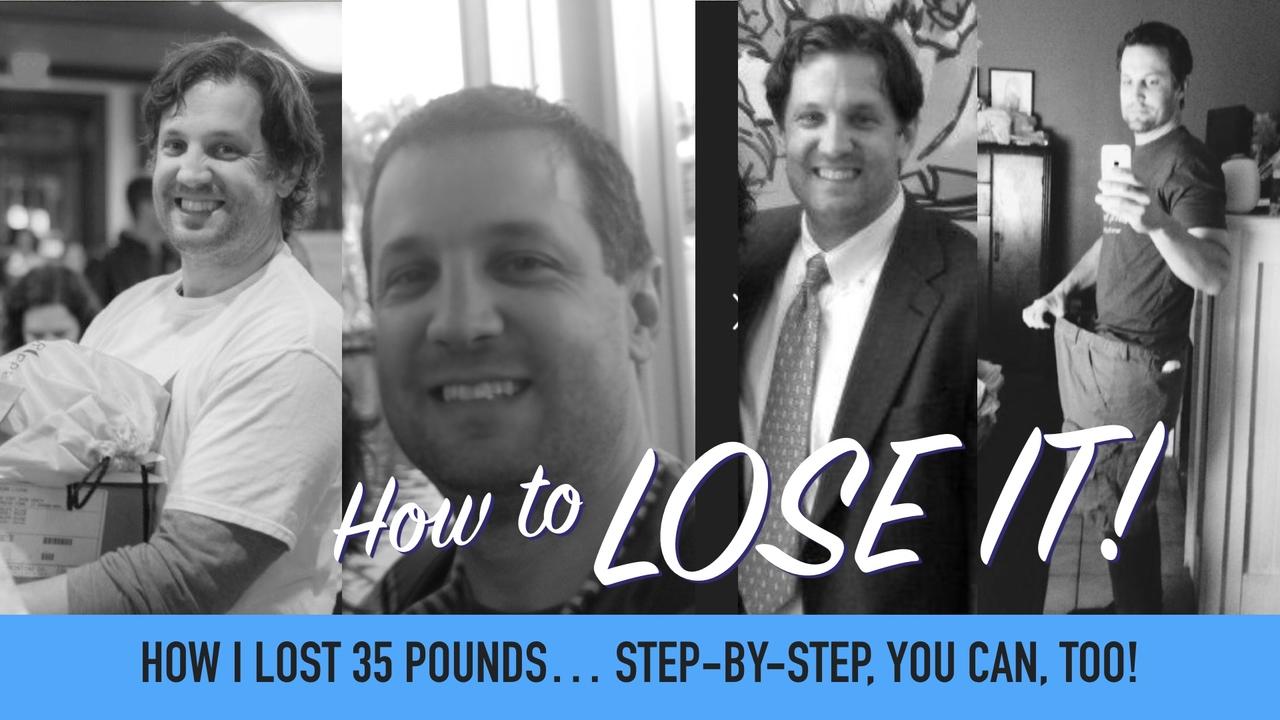 Disclosure: this is the most un-fancy weight-loss plan you've probably ever seen. It's common-sense and simple, though.

1. I looked in the mirror and didn't like what I saw. I havdn't jumped on a scale in a long time. Every now and then I would do it, but would be disappointed with what it said, so I pretty much avoided it.

Over the holidays I tried some pants that didn't fit (I needed larger ones), and I saw myself in a few full length mirrors. Then I saw myself again while I was in Hawaii on a free trip we took with Cristy's new essential oil business back in March 2014.

2. I defined the goal. I decided that I was going to lose at least 30 pounds (again, humorous version of Cristy and I discussing this is in my book- and even in video on the link above).

I figured I would weigh-in around 210 after dieting / exercising a few days. Though I planned to weigh-in each day (and have since I began this little journey), I wasn't going to have access to a scale until a few days after I began). So I was really guessing at my start weight (212), which is what I had been at / near consistently for a few years- though I occasionally peaked as high as 221.5! I decided I was going down to at least 182/183 (I'm now at 177/178, depending on what I ate the previous day).

I believe this: if you don't have a target... if you're just ambitious with something like "I want to get in shape" or "I want to lose weight," no matter how well-intended the idea is, you won't make it. You'll negotiate, talk yourself out of it, or let it go... I've done that before and didn't want to do it again. So, I laid it out. My specific mark was 182/183- 30 pounds from my initial weight.

3. I made a plan that would take incremental steps to get to the goal. In other words, I broke the goal down into small steps. This is where this process gets boring- and this is where I lose most people that I explain this to.

I actually made a spreadsheet. I charted three months (I began the weight loss journey on March 1, and wanted to "make weight" by Cristy's birthday on June 1- so I've made it a few weeks early and I'm underweight).

I actually made that spreadsheet, and I'll be glad to email it to you. I'm running a MacBook Air, so it works on Numbers, but it will confer to Excel easily. It has a horizontal column for every single day for that three month period. I made vertical columns for the following:

Oh, I formulated the sheet, too, to actually tell me my total weight loss each day. As soon as I plugged the new number in for the day, it would automatically give me the running total since my first weigh-in. That way, I could see progress in real time.

Here's how I looked at it: Losing 35 pounds is overwhelming. Losing 3 or so each week for the next 12 is much more do-able. Consequently, I only missed one weigh-in- the last one. I was underweight with two days to go... then Cristy and I ran some errands late one Saturday night. We decided to stop and get Mexican food. I knew that I would "hold water" from the sodium for a day or so, but decided it was worth it. I missed weigh-in that next morning, but was back down a few pounds lighter a day later. Not bad progress.

The first step- pick a plan

I knew I had to exercise, so I picked an exercise routine I could do every day. Yep. Every. Single. Day. No off days. I know the arguments about rest time... The workout I chose has a stretch day built-in, so I did that on my "off days."

I chose Focus 25 / T25 as the workout. It takes 25 minutes a day and is the "short, more intense version" of Insanity. I recommend this one- you should simply choose something that works for you. In my opinion, this one was great because:

I have used P90X before- and actually gained weight in doing so, because of what I was eating. p90X is an incredible program, but it takes an hour a day. I knew that if it took an hour, there would be a lot of days that I couldn't get it done. So, I opted for something I knew that I could do every day of the week, something I knew in which the "time factor" would work.

Turns out, I was able to double the workouts after about the third week. I didn't do that every day- just 2 or 3 times a week when I was feeling really good and had extra time. I think this might have made some things go faster.

By the way, Cristy was recently doing a great workout called "Slim in 6" (as in 6 weeks). It takes an hour a day. She swapped to my workout because of the time factor.

The second step- deciding what to eat & what not to eat

This was perhaps the biggest factors in my success: I decided beforehand what I was going to eat. No last minute, spur-of-the-moment decisions.

I learned pretty quickly that the eating is the biggest factor in the weight-loss equation. In fact, an article I read online (I'll find link and post later) suggested that 75% of the diet / exercise equation depended on your diet- only 25% depended on the exercise. I found this to be true.

I had a few eye-opening "moments" regarding this-

I learned that it's easier to monitor what goes in my mouth than it is to run it off. It takes about an hour of T25 or running to burn up 700 calories. That means I can "give up" any progress I make that day on the workout just by ingesting those treats. In the end, it's not worth it.

This doesn't mean that I had a "meal plan" or anything like that. I didn't pack lunches, prep meals the night before, or do anything of the sort... I just had an idea of how things were going to go and stuck with it.

Here's the short version- I'll give you more in a separate post.

I wrote everything down throughout the process. I still do. Well, I didn't "write it," but I put it in that spreadsheet. I typed it.

This forced me to think about some things. And it caused me to make some "intelligent" decisions about my health. And it provided me with options.

For instance, some days I knew I was going to go out on a date with Cristy. We were going someone to eat that I really liked and I knew I would want the steak. Or that we would order desert and I would want to take a bite of it. No problem.

Other days I was surprised at how much I had already eaten- or the fact that I hadn't eaten much at all yet. Writing things down caused me to actually evaluate and think through what I was doing. This, to me, was as important as the diet and exercise.

Stick to it, regardless...

I decided, too, that I would do my plan- no matter what.

A few times throughout the journey I actually plateaued for 5 or 6 days. Oddly enough, I saw that when I continued working my plan, the weight would eventually fall off. Most often, after a few days of the same weight, I saw a 2 or 3 pound "instant" drop. It made me glad I simply chose to keep with the plan. If I hadn't, I would have quit way too soon.

In addition to losing weight, I actually got my health back

Other things happened during this process, some of which I just assumed would never happen again.

1. I hit the same weight / size I was when I first married Cristy almost 16 years ago. I thought this would be impossible- b/c I had been told, and I believed, that you "fall apart" when you get older. I turned 40 the December before I started the weight loss journey. I feel better now than I did when I was younger. That's surprising.

2. I sleep better- and I sleep less. I used to wake up 2-3 times in the middle of the night to use the restroom. For some reason- I have no explanation why, but that stopped the first week I started my new lifestyle choice. This has meant that I sleep straight through the night and only need 2/3 of the sleep I used to get.

I also use to wake up sore and tired. I had to "stretch my bones out." My muscles ached and I was stumble around for 5 minutes or so. That's over, too. Again, I have no explanation for either thing, but I'm grateful for both.

3. I wear better clothes. I hated trying on clothes before. Now, I actually like getting new stuff. I can wear skinny jeans- and just bought a skinny suit (the old ones had to go- they didn't fit, so I passed them to some of the guys I work with).

4. I saw instant healing- and ongoing healing.  My body had been riddled with digestive issues- and other things- that I thought I would just deal with for the rest of my life. As I began losing weight, though, all of these issues disappeared. All of them!

In fact, this became such a major issue that I began creating a class to teach about how both kinds of healing work together. You can learn more about that workshop here:

Here are some of the products I used:

2. Ningxia Red. I mixed the Power Meal with 2 oz of Ningxia Red- a wolf berry drink. (Search "Wellness" > "Energy and Stamina" on her site.

3. The oils. Some people have asked me (some, tongue in cheek / others, very seriously) if I used Cristy's essential oils to lose weight. The answer is "yes" and "no."

By the way, after two months of this, I stepped up to the next phase of the workout, called Gamma. Focus 25 takes you through month of Alpha (cardio), a month of Beta (cardio, with some strength), followed by Gamma (strength, with some cardio). It's served me well.

That's a wrap- take your next best step

OK. That's it. I told you. It's not glamorous. It's not flashy. But it works.

Can you do it another way? Absolutely. This is simply what I did. I think any of the plans out there will work if you're consistent.

And, if you're wondering which oils I used- and how- check the next post.