September 2018 I did something I never imagined I would do: I took a psychological evaluation. A full one. The kind with hundreds of questions followed by a sit-down interview with a licensed psychologist.

To say it another way, I voluntarily took one of those tests that cost several hundred dollars and can label you for the rest of your life.

Again, I asked to take it.

Here’s why: smack-dab in my mid-40s I effectively averted the typical mid-life crisis by living a few tough years. Most people knew nothing of the trauma and trials I  endured, but the pain was there. Every few months I spoke about pieces of my story from the stage at an event where I spoke, or I offered a glimpse inside my world via my podcast or some other venue where I taught. Looking back in the rearview mirror of my life, I realized I’d endured enough to knock someone off their feet and into the grave.

I mean it. The grave.

At one point several years ago I actually contemplated taking my own life. Knowing life insurance policies like mine carry exclusion clauses which automatically negate the payout in cases of suicide, I planned the ordeal in my mind down to enough detail to make it emphatically not look like suicide at all.

Then I “got better.”

And then— as often happens once you taste a bit of victory— the bottom of life fell out like the proverbial plank dangling over the edge of the pirate ship. Turns out, I’d learned to manage “fruits” without addressing the roots. (No worries if that sounds like I’m speaking Klingon— I’ll come back to the root-fruit issue in chapter 12).

I was regularly visiting a counselor when I took the eval. In fact, the eval was such a serious deal I needed a referral to take it. So, the PhD I was seeing did the honors.

That counselor happened to be the second professional with whom I scheduled regular meetings in an 18 month period. I abandoned the first “pro" after learning that although he presented himself as a therapist he had no credentials at all. That’s right, zero.

The first guy, though tender and kind, regularly over-stepped professional and ethical guidelines by providing legal advice and offering false wisdom which clearly landed far beyond his skill set. Ironically, I was referred to him by a friend of his who was— who is— a licensed counselor and, to my knowledge, also assumed he was credentialed. Kind-hearted and well-intentioned, he proved disastrous. So, I found the second guy, Michael, someone whom I verified possessed the credentials and had enough history to help me move forward.

After a few sessions, he assured me, “There’s nothing wrong with you psychologically. You’ve just made a series of poor decisions. Some of those are understandable— not excusable, but understandable— in light of the circumstances you faced.”

I mentally retraced the past few years, cataloguing each significant event in just a few micro-seconds. The past doesn’t excuse us, but it does explain some of our decisions.

“But I need to know if something is wrong with me,” I told him. “I need to see for myself.” Then— “If there isn’t, OK. If there is, I’m going to address it and get help. I’m not looking for a diagnosis, but I’m not trying to avoid one, either. I just want to intentionally walk in wholeness.”

With my insistence Michael referred me to Jeff, a licensed doc with a long list of credentials, numerous referrals, and his own history of helping people navigate the tough terrain of mental and emotional health.

I returned from speaking at Advance 10.0 in Minnesota on a Monday afternoon. I rushed my boys to Scouts to earn a Citizenship in the Community merit badge that evening, and then arrived at Jeff’s clinic south of Birmingham the following morning at 7am for the eval.  It was a whirlwind.

A few weeks later I received a phone call.

“Can you come in later this week?” It was Jeff. The doctor. I assumed he was calling to discuss the details of my evaluation with me, but he wasn’t…

I contemplated not going for a moment. The first time I visited him for the eval, I went to the office where I was working with a nonprofit to create some tools on— get this— emotional and mental health. That morning, in the office, a runner served me with legal papers. I was being sued by someone— my ex-wife— who promised me just a few weeks earlier than she “weren’t my enemy” and "could aways be trusted.” What a poo-storm of a few days…

After a few moments, I came back to the present moment. I asked Jeff point-blank, “Do you have a diagnosis for me?”

“No, I don’t,” he said. “I don’t have anything yet. I need more info from you. Your case is a bit complex, so I would like to interview you a second time.”

Most people simply take the test and then meet with the PhD or PsyD afterwards. Not me. My story was so technical it necessitated a second discussion.

Was I that messed up?

I decided it didn’t matter if I was or wasn’t. If the goal is to walk in total health, you turn and face whatever stands in your way and you move through it.

Not Out of range

“Yes, sir. I’ll be glad to come back,” I replied. Then— “If something is wrong with me I want to know what it is so that I can address it and make it right. I’ll meet with you as many times as you need.”

In that moment I told myself, “Yes, great. I’m moving forward in the right direction. I’m going to get this figured out. Finally.”

And, simultaneously, I thought, “Geez… I require more time and attention than most people. He’s found something.”

Turns out, he hadn’t.

Well, that’s technically not true. He didn’t ever offer a formal diagnosis, but he did find something.

After another 90 minutes in his office, Jeff told me, “You’re not out of range, so I’m not comfortable diagnosing you. That said, you do have some things that caught my attention…”

“What do you mean by out of range?” I asked.

“People see it all as black and white, as opposites? That’s kinda how I do…”

“Yes, but it’s not like that at all.” He began drawing an imaginary scale— sideways— in the air with his hands. “Think of it like this…” 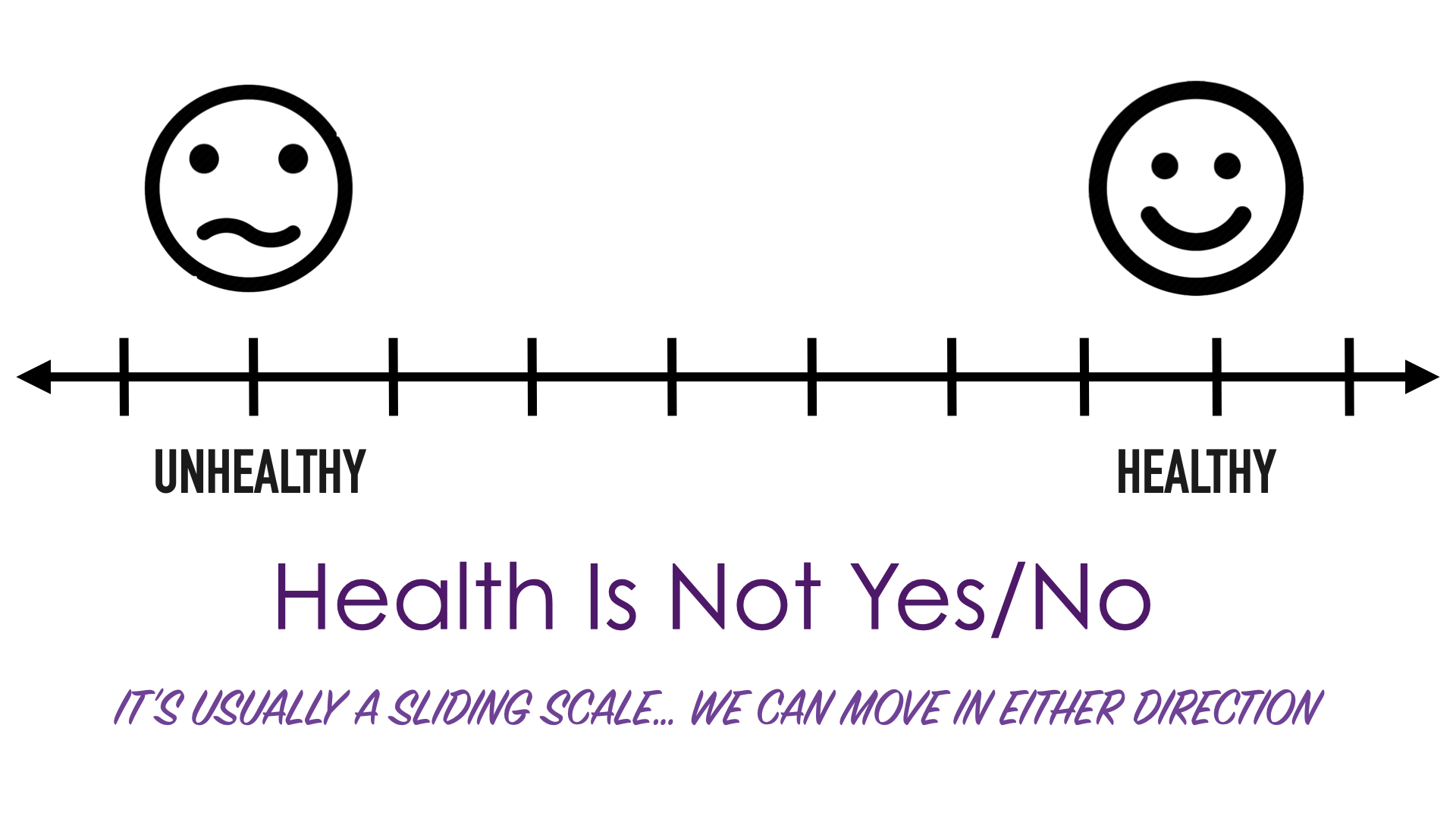 He explained that on one end of the line you have a totally healthy person and on the other end you have a completely unhealthy person— as far as that one issue goes. The MMPI, the standard test I took, measures for numerous psychological disorders, meaning you might be healthy in one area but unhealthy in another. That is, the evaluation-instrument isolates different issues. And, the test is clever enough to tell whether or not you’re lying or even “self-protecting” from the administrator of the test when you take it.

Jeff continued, “Most people don’t fall on either extreme. I mean, they don’t fall off the one side where they’re completely unaffected by something. In fact, that would be unhealthy. For instance, the extreme opposite of narcissism wouldn’t be healthy, either— it would mean the person probably lacks self-worth and a healthy sense of their identity.”

As I nodded in agreement, beginning to understand what he was saying, he continued, “But most people don’t fall in the range where I— or any other professional— would diagnose them. There are a lot of people on social media using terms like narcissism and gaslighting and abuse who really have no idea what those words mean. In fact, many of the people who use those words the most are the biggest culprits…”

“I don’t like it when people use those terms,” I confessed. “They use them like grenades, and generally launch them at someone they had a disagreement with.”

“That’s only part of the problem,” he said. “Another part of it is that most of the people who use those words completely misdefine them. They use them as ‘hot words’ without any true definition. Or, even worse, they supply their own definition. No one gets to re-write the dictionary…”

He continued, “Another issue is that because they mis-define the words, and because they most often— you might even say always— use them in a negative sense, it keeps people who truly struggle with the issues from seeking help.”

“That all makes sense,” I told him. “People get understandably nervous when they think they might have a physical issue to deal with, but we don’t attack them or  assume inherent character flaws exist. With mental and emotional things, we automatically do.”

“That’s the other part of it. Mis-definition of it all makes people afraid of exploring an area in which most of us could truly benefit from a little help.”

“How does this relate to me personally?” I asked.

“That’s a good question. Your test came back and revealed a few things…”

“Well, first of all, you were a bit defensive.”

“How so? I just answered a few questions with a pencil and paper before we had the interview.”

“I know. The test showed that, though. There are questions built-in to screen that. You’ve been through a lot in the past few years, so this makes sense. It shows me that you’re carrying some tension, some nervousness in general.”

I thought for a moment, once again replaying various scenarios like the highlight reel of a horror flick for a few moments. I’d been a stress ball for quite some time, always bracing for when I was going to get emotionally punched again.

“You’re not diagnosable for anything, but I can tell you the things you probably struggle with…”

For the next 15-20 minutes I listened to Jeff graciously outline some of the deepest struggles I had— some of the same issues the people closest to me would understand once explained. Yet, I’d never heard someone detail them with such accuracy, with such honor, and with such tenderness.

“At some point, you had to crash,” he said. “There’s no way you could keep carrying this weight. “Now that you’re here, though, at the bottom, we can rebuild. And we can rebuild in the right way.”

Jeff told me that many people never seek help precisely because their cases aren’t extreme enough to warrant a formal diagnosis. Yet, at the same time, they’ve been affected and wounded. 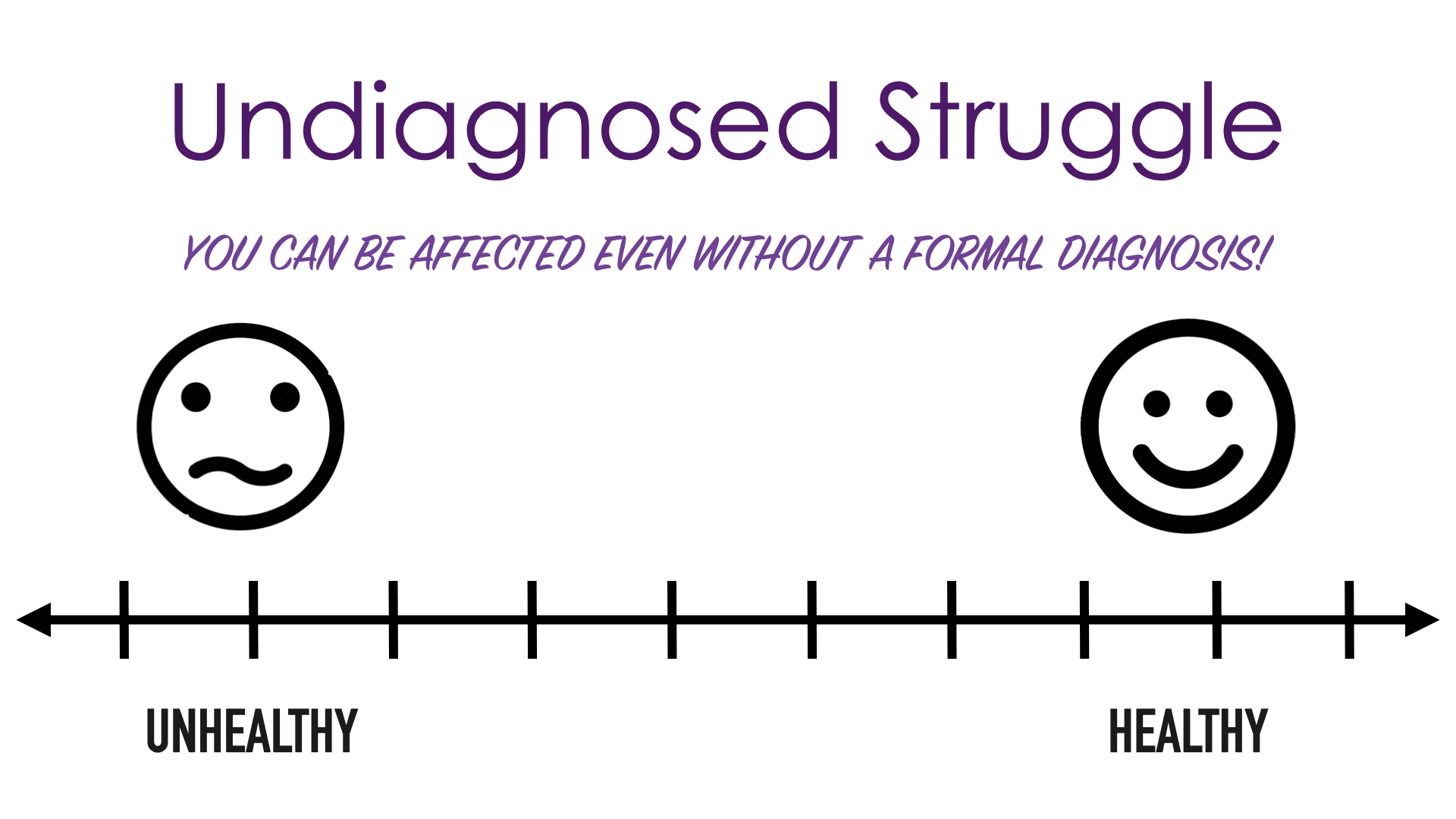 I thought about it. I’m not a psychologist, a counselor, or anything of the sort. In my mind, it all made sense, though.

A halfway broken bone is considered a fracture. A halfway “knocked out” boxer often has a concussion. A halfway working lung, kidney, or physical heart is… well… you might or might not even survive those halves…

So why don’t we apply the same criteria to emotional or mental hurts as we do physical ones?

It means you go undiagnosed. And you, if you don’t pay attention, you live with an undiagnosable struggle.

Links for this video--

👉 Take a deeper dive through the entire Soul Wholeness workshop + book and more at www.Jenkins.tv/SW 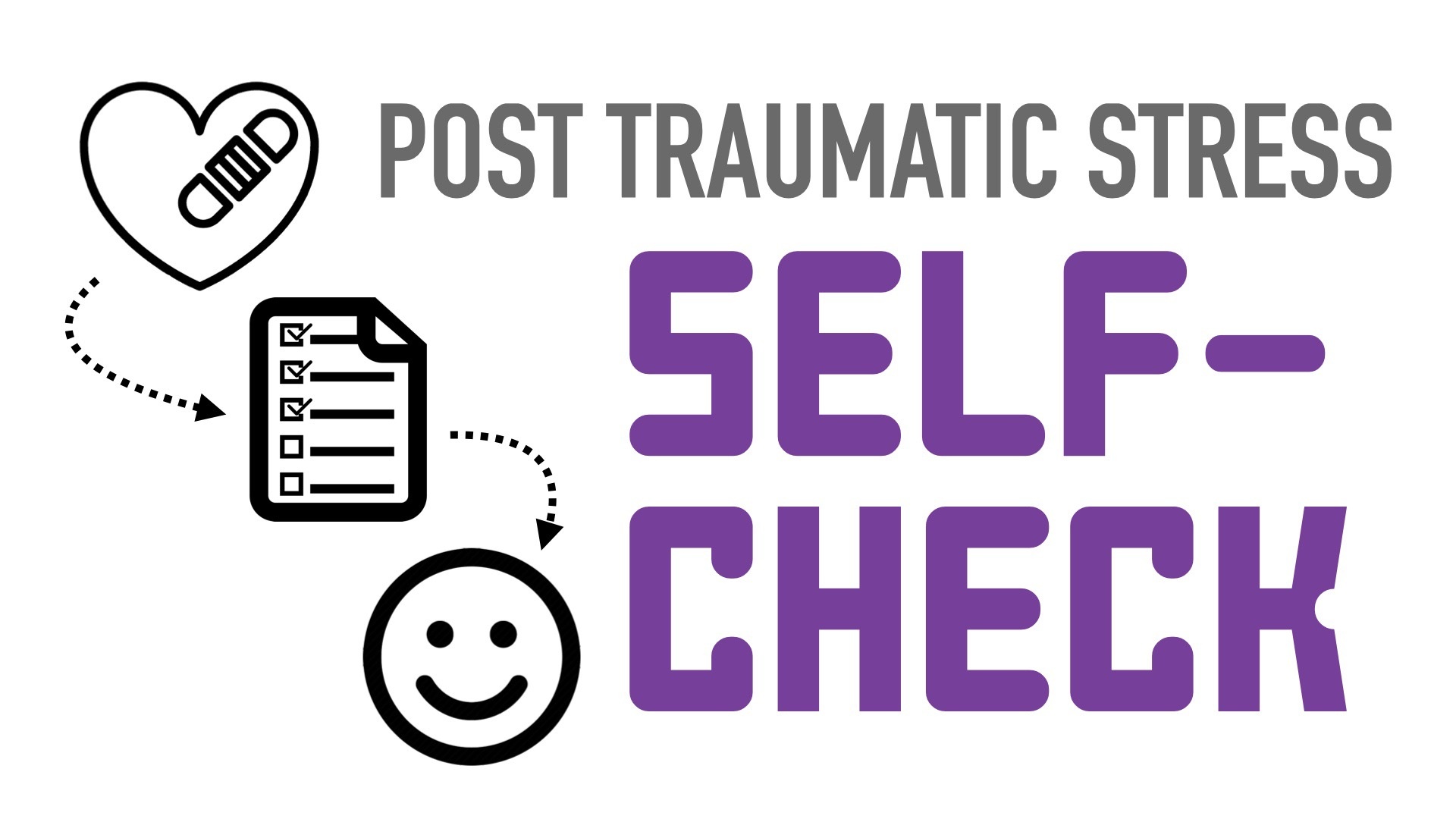