Video: What you need + What they teach = Result

I see people falling into two extreme camps when it comes to using essential oils:

One group thinks you’ve got to have the precise oil that matches the body system you’re to support or the symptom you’re wanting to address. So, this group spends copious amounts of time dog-earing pages in large desk references book, they create color-coordinated codes for their highlighter usage (which often requires a decoder ring to decipher), and they have logs of notes about what they used at which time.

I’m not knocking them. I actually admire this group. I wish I could be more like them.

After attending a healing workshop, a health convention, or speaking at some venue and rubbing shoulders with some of these folks I’ll often think, “Hmmm… I should really be more disciplined. If I could only tackle one new oil a week and learn about it, I’d be SO MUCH MORE knowledgeable in just a few months.” Then I envision myself in a year… then in 2 or 3… and then I get overwhelmed and just revert.

On the other hand, you have that other group… the group that declares, “Just use what you’ve got!” Any essential oil = as good as the next, right?

I love simplicity of this second group. I admire their spunk. People in this camp are the ones that would, as the saying goes, charge hell with a water pistol. And they’d probably be successful 😃

Here’s the deal: I go back and forth between groups.

On one hand, yes, it’s great to know what different plants do. When we have a little knowledge, we feel more empowered. And confident. And that confidence is contagious. Confidence alone will help you look better + feel stronger.

On the other hand, we can over analyze it. Sometimes, we just think too hard about it. Simplicity works.

So let me steer a middle ground here, a third option, and outline some of the basics of the Twelve Oils of Ancient Scripture (some people refer to them as the “healing oils of the Bible”). Let me land on a method that walks right down the middle of “getting ultra-specific” (first extreme) and “anything goes” (other extreme). In this path- the one of simplicity AND LEARNING- we actually see some amazing truths come to life.

And, yes, we’ll keep it simple.

That said, once you understand the basics of the oils, you’ll probably begin recognizing them throughout the Bible. You see, essential oils- particularly the oils in the Twelve Oils of Ancient Scripture kit- appear HUNDREDS of times in the Bible. In fact, as I’ve taught in other places, we don’t see MORE detail about them because they were so common place that the authors of the Bible just assumed that we would know what they were talking about.

In fact, the authors of the books of the Bible assume a lot-

* They assume we’ll understand The Cross, so they don’t give us much detail about how a crucifixion actually happened- even though this is the centerpiece of the Book

* They assume we’ll understand how to baptize someone, so they don’t give us any information other than the fact that Jesus said to do it… As a result, we’ve spent countless centuries and lots of spilled ink (and blood) and endless theological debates arguing the minutia of it

* They assume we’ll understand what happens at communion, the Lord’s Supper, or the Eucharist… all names they don’t actually use…. yet, again…

You get my point.

Each of these concepts- The Cross, baptism, and communion (the Lord’s Supper / the Eucharist) are loaded with meaning. They’re rich. They enliven our faith. They’re important.

Which leads me to this. So are essential oils. In fact, I'd say their a necessary ingredient to walking in healing + health. No, they're not a magic bullet or "catch all," any more than 7-8 hours sleep a night is a THE thing that will make or break your health (even though sleepologists swear that you need that much sleep AND it's proven that you do, right?).

* James says the elders of the church should anoint and pray for healing for people with them (James 5:14)

* The wise men even brought them to Jesus at His birth

That said, let me show you a few places we see the Oils of Ancient Scripture together. And, since simplicity is the goal, let’s create a basic math equation that works something like this >>> What you need + What they teach = Result! 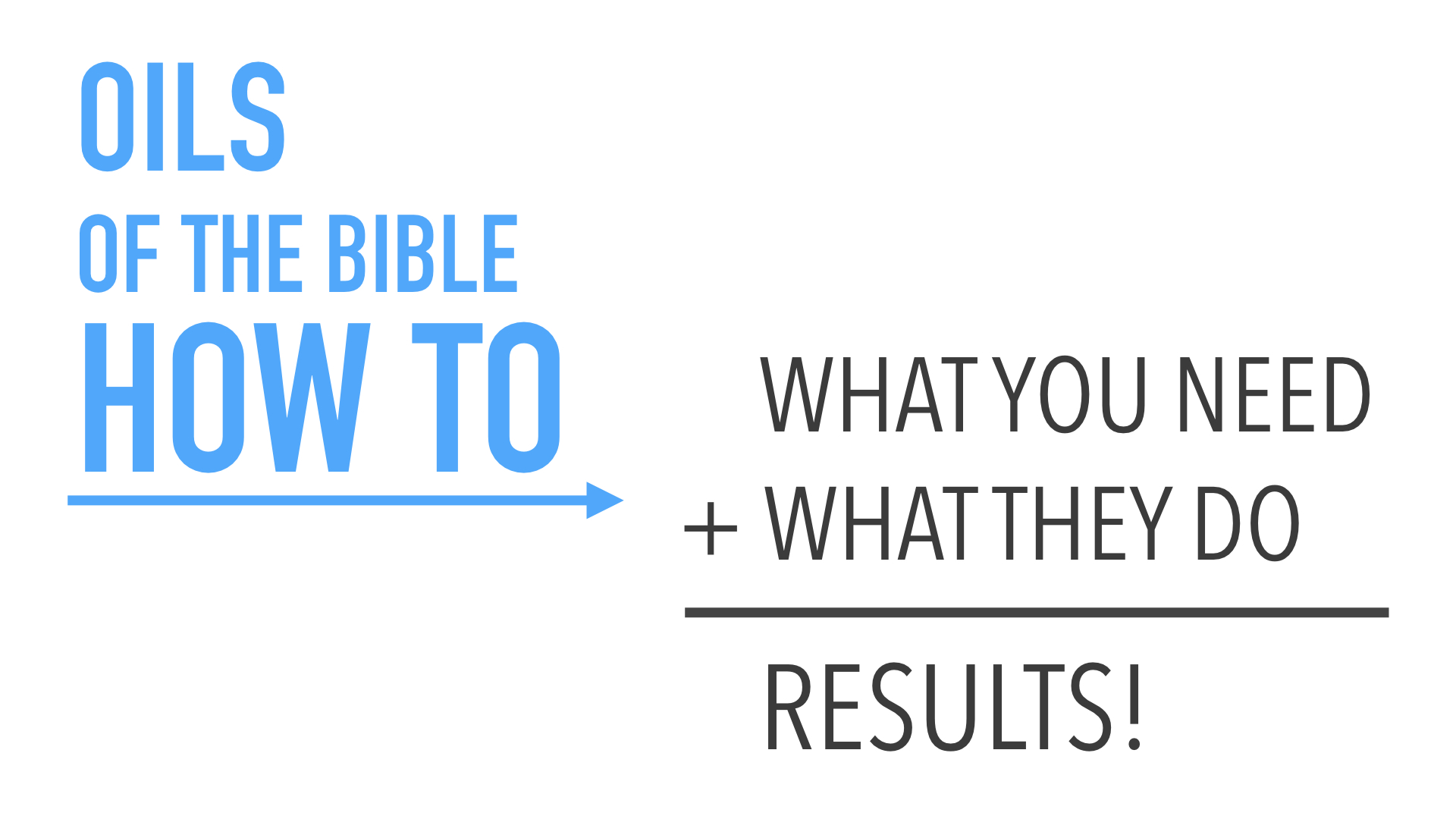 For our purposes here, we’ll look at three examples: the Holy Incense (Exodus 30:34-36), the protocol for cleaning the lepers (Leviticus 14), and Jesus’ birth. 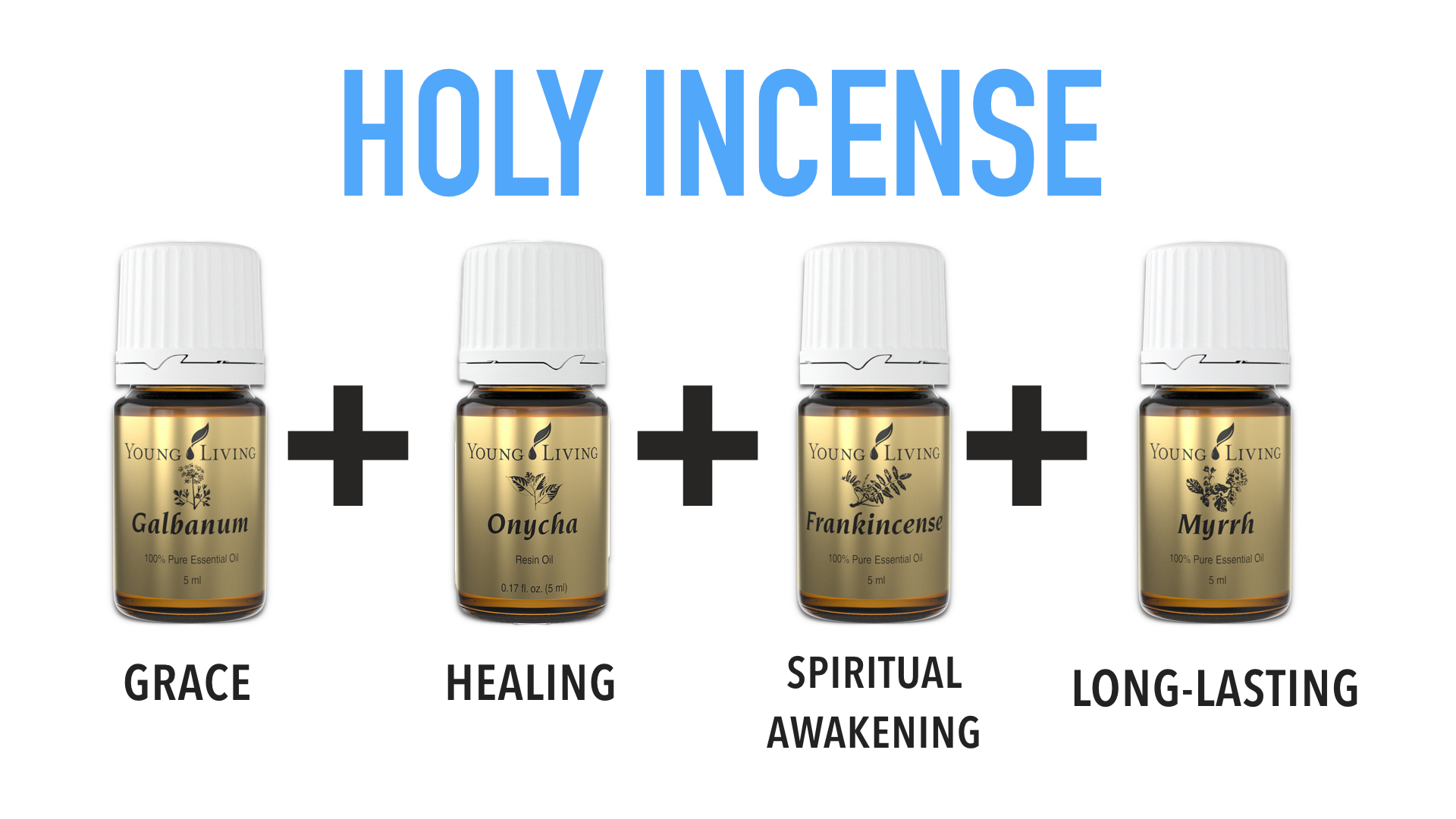 Example 1 of 3: the Holy Incense in the Temple

Notice how each of these oils “fit” together to make a perfect blend for the Temple (Exodus 30:34-36). First, we see grace in action (Galbanum). And, we see the presence of healing (Onycha), along with spiritual awakening (Frankincense).

This sounds a lot like sozo, the third word for healing we see in the New Testament.

* Iaomai refers to “miracles” (examples: the blind man can see, the lame man can walk).

* Therapeuo refers to “healing over time” or “taught how to live well (getting enough exercise, eating right, sleeping well, and lowering stress… are all examples of therapeuo). Oddly enough we see therapeuo appears more times in the New Testament that iaomai, though we typically think that iaomai is the only way Jesus healed (He used both methods in the Gospels, as do the disciples… then Paul in Acts).

* Sozo refers to healing of the body, soul, spirit… physical protection, the resurrection of the dead, and the forgiveness of sins. It’s truly a word that means “everything we ever see Jesus do,” showing His reign over all of life.

When we see Galbanum, an oil thought to exude feelings of grace and ease… Coupled with Onycha, which was commonly used in the ancient world as a healing salve, as a medicine… Partnered with Frankincense, an oil believed to increase spiritual alertness and receptivity… We are seeing the third type of healing- the total reign of Jesus over all of life.

As well, Myrrh elevates and magnifies the qualities of all other oils, and is noted for its ability to bring peace and calm- to the body, soul, and spirit.

Remember, today, you are the temple (1 Corinthians 6:19). This is the same power-combo that resides in you- Grace, Healing, Spiritual Awakening, and Long-lasting Peace.

When people walked into the Temple they would experience-

This is what you're invited to experinece every single day- and it's what people encounter when they come in contact with you. 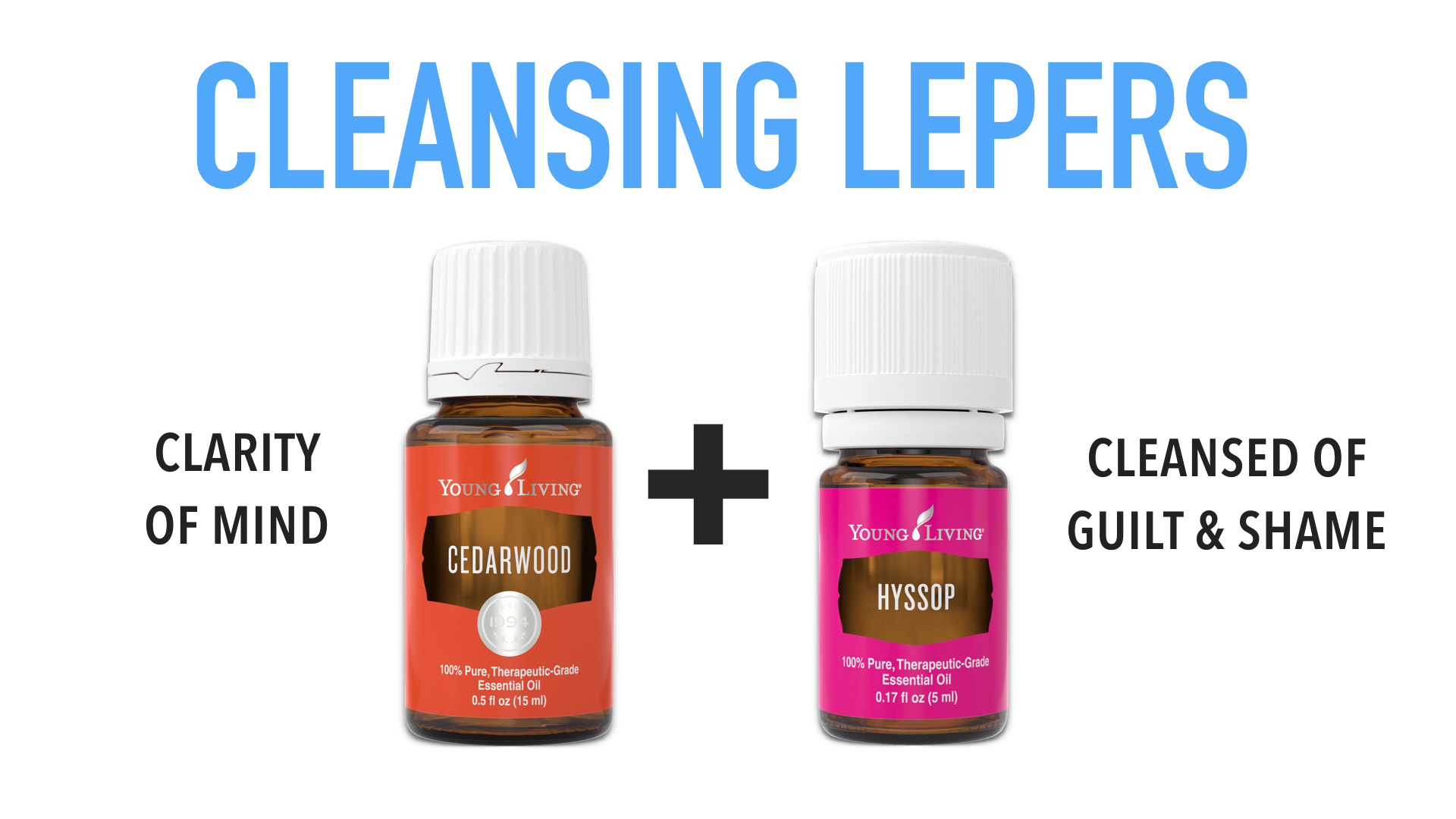 Example 2 of 3: Cleansing the Lepers

Notice two of the oils used to anoint lepers, as outlined in Leviticus (14). Again, we’ll break it down and use basic, simple math. We’ll see what we learn about the oils to see the result God was looking for… and discover how He was shepherding His people.

We see the lepers were given a renewed mind (Cedarwood), which would empower them to see reality differently. That’s their starting point.

Let’s be real: sometimes the biggest obstacles we face aren’t the giants in front of us; they’re the giants we allow to clumber around our heads, right?

And, they were cleansed of the old guilt and shame associated with their disease (Hyssop).

Why? Because lepers were excluded from the community. They were shunned. No one would touch them because people believed that if a leper touched you THEN YOU would become unclean.

Jesus actually flipped the script and TOUCHED lepers- even though He had the power to do “long distance” miracles and simply heal people with the power of His words alone (Mark 1:40-45).

He overcame the distance they felt and, in effect, said, “When I touch you, you won’t make me unclean… rather, I’ll MAKE YOU whole and clean!”

He showed the clean always trumps the unclean. But no one knew that at the time. People were certain things went the other way (geez, don’t WE STILL think that today, sometimes?).

As a result, the lepers lived in isolation- and with a great stigma.

Furthermore, they couldn’t hide their issues like other people could (or like we can today). Their skin disease was out there for everyone to see. At some point, yes, they needed mental clarity (Cedarwood) and something to break through the feelings of guilt + shame that accompanied them for so long, literally become a “second skin” for them (Hyssop).

By the way, many New Testament scholars believe leprosy is a “type” (read: foreshadowing) of sin- as sin separates us from others, it brings its unique stigma and condemnation, and it becomes our identity. 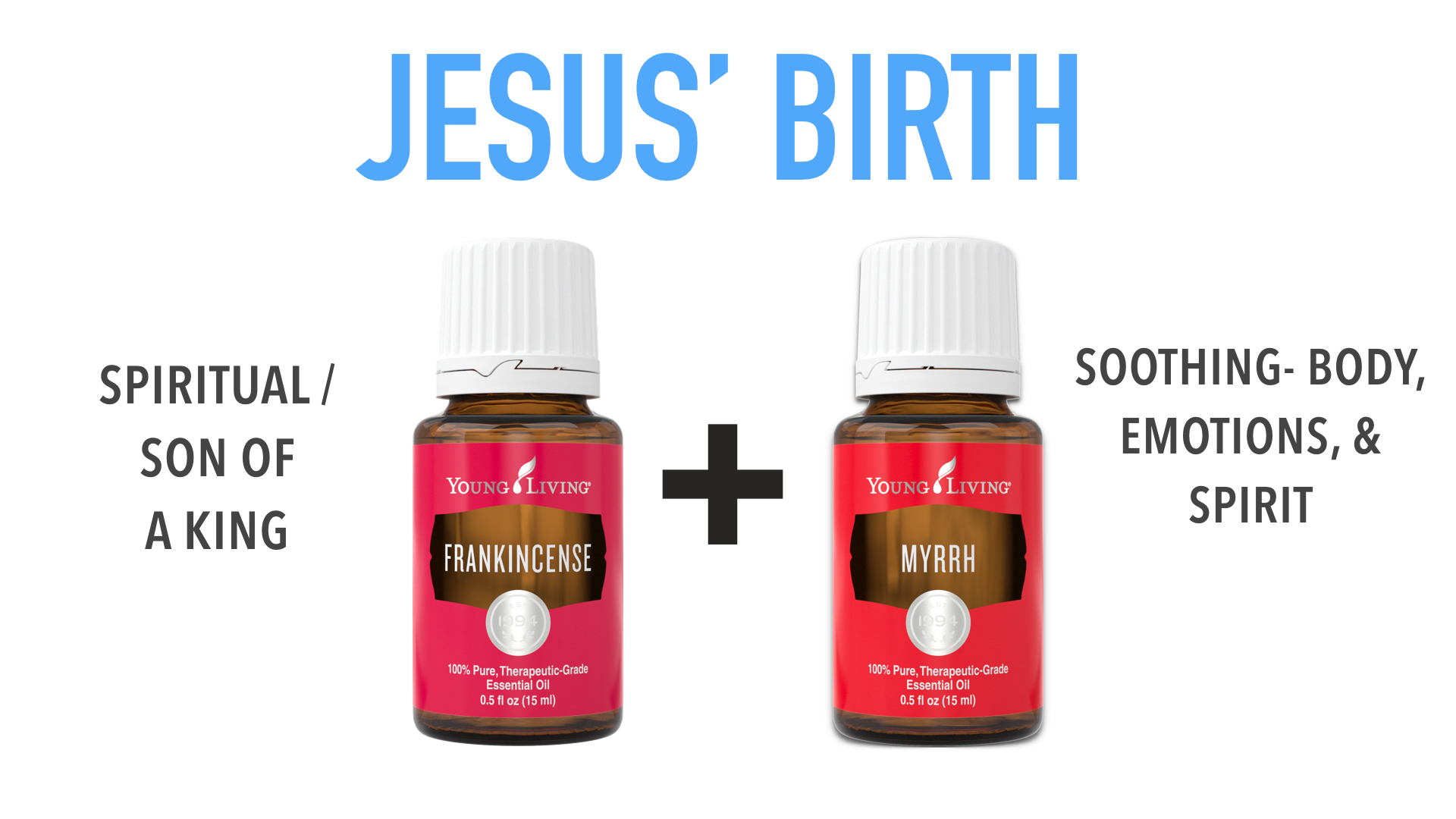 The birth of Jesus is highlighted by the unique gifts the magi brought to Him. One was the same oil used to anoint all newborn sons of kings in the ancient world- and was the “go to” the all traveling healers in Jesus’ day carried with them (Frankincense).

The other brings peace and comfort to the body, soul, and spirit (Myrrh).

Is this not what Jesus came to do?

You might also like the entire 20-minute video where the Twelve Oils of Ancient Scripture was taught. 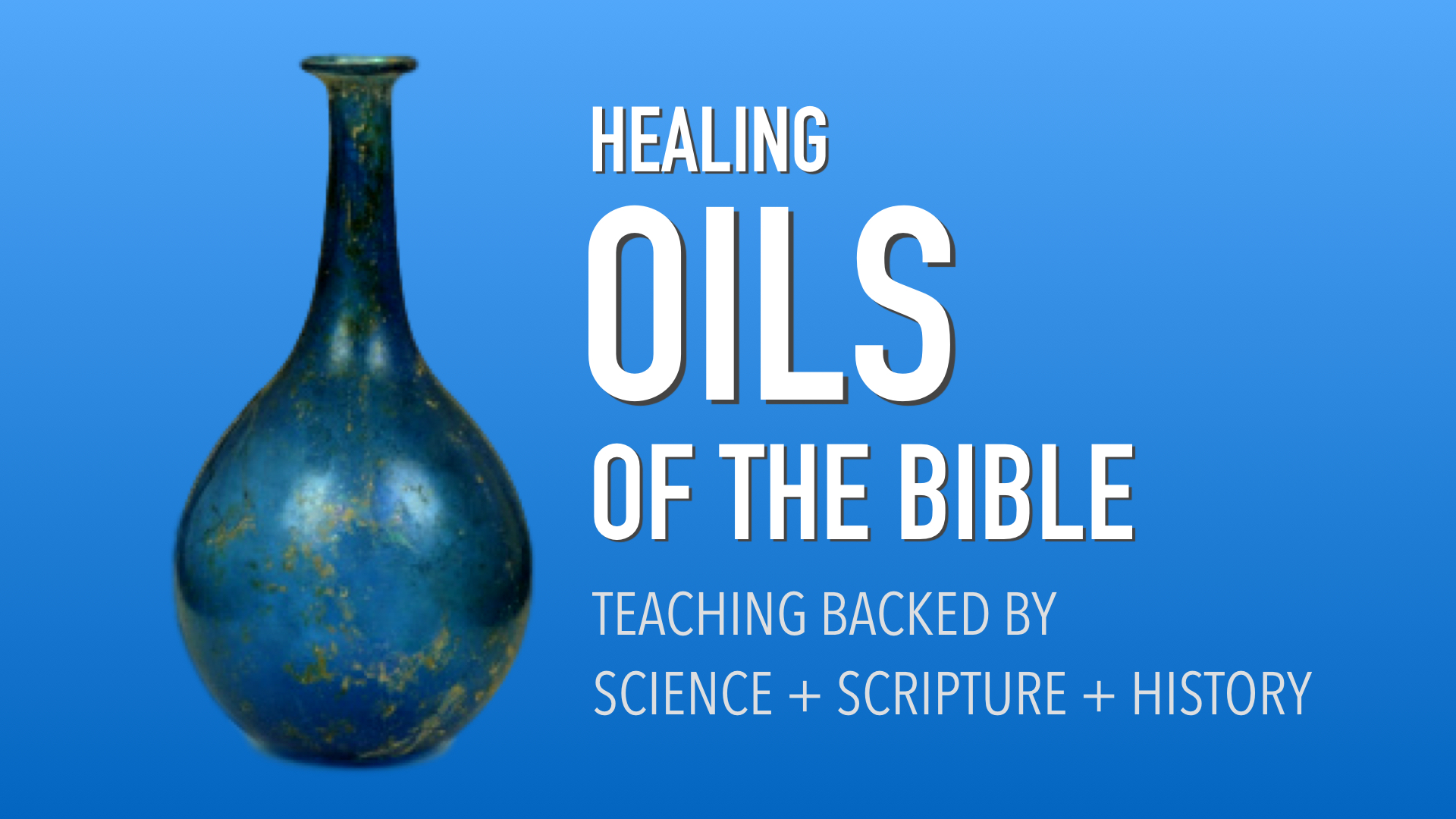