Video: The influence of the evil one or toil?

We tend to compartmentalize our lives. We think that some things are “holy” and some things aren’t. Some tasks are important… and others… well… they don’t matter as much.

Notice, He grew relationally, He grew physically, and He grew in terms of practical knowledge. Each of these areas was part of God’s plan for His life…

Again, we tend to separate the spiritual from the "real." But these aren't disconnected ideas. This means that-

I grew up in the church. I’ve worked on staff at several churches. I’ve consulted for others.

There’s a tendency in the church to equate “full time ministry” with “more spiritual” work and “full time something else” with less spiritual. Thankfully, the church is swinging the pendulum back to the middle, upholding the truth that people can be called to do all sorts of things. That is, a teacher can be just as called as a pastor who can be no more called than a fireman who can be just as called as an evangelist…

About a year ago I taught about healing at a church. On a Sunday morning. At the end of the service, we invited people to come receive prayer if they had a physical issue they wanted to see remedied.

After praying for a few dozen people, I noticed a young woman wanting prayer…

“I feel like God wants me to heal people, too,” she said.

But she said it reluctantly, like she was holding back some of the info…

“I’m about to finish school,” she replied. “I’m in college. I’ve got a family and I’ve been working on my degree for a few years… we’ve all made sacrifices so that I can finish, but I feel like I’m supposed to be healing people with God’s power, with His touch…”

She explained that she was ready to work, and that her family needed the income. At the same time, she felt this tension between doing what God called her to do and having just taken a (costly) run at school for a few years and now needing to help with the family finances.

“What’s your degree?” I asked.

She told me she did. But, somehow she felt she was supposed to be healing people.

“Does it feel like toil when you do it?” I asked. “Or does it feel energizing and life-giving.”

She smiled and told me- shyly- that she loved it. At the same time, though, a church leader had (wrongly) insinuated that if she was really following the call of God for her life she would pursue ministry full time.

I explained to her that she had chosen the perfect profession for a healer. “Where else are you going to have access to people at their most vulnerable moments? Where else do people need a touch? I mean… you’re going to be with people and their families when they are sick and desperate… when things seem hopeless… and you’re going to be able to carry your light there…”

I told her that she could pray for them. Even if sometimes it had to just be silent, it would still work…

“And the medicine and technology you’ll have access to,” I added, “It’s all God’s, anyway. And He has it there for you…”

After about 60 seconds of coaching her through this, she got it. She looked lighter. She began smiling again. She left feeling empowered… and called…

That’s what vocation means, right? The root of the word of vocation, vocal, means to hear the voice… the calling… over what you do.

This works in every area of life-

What's more like Jesus than a fireman who would leave the 99 at safety to rush into burning building and hunt for the one?

What's more like Jesus than a CNA at a nursing home, one would will stay up late at night, shepherding an ill elderly woman who has outlived her family and friends?

What's more like Jesus than a police officer, one who will run towards the line of fire while others flee to safety?

What's more like Jesus than a teacher... someone who will walk elementary kids through basic math and long division, patiently and tenderly showing them how life works...?

What's more like Jesus than the stay-at-home mom... the one who lays aside her dreams of greatness in favor of doing the amazing work of caring for "the least" in society? 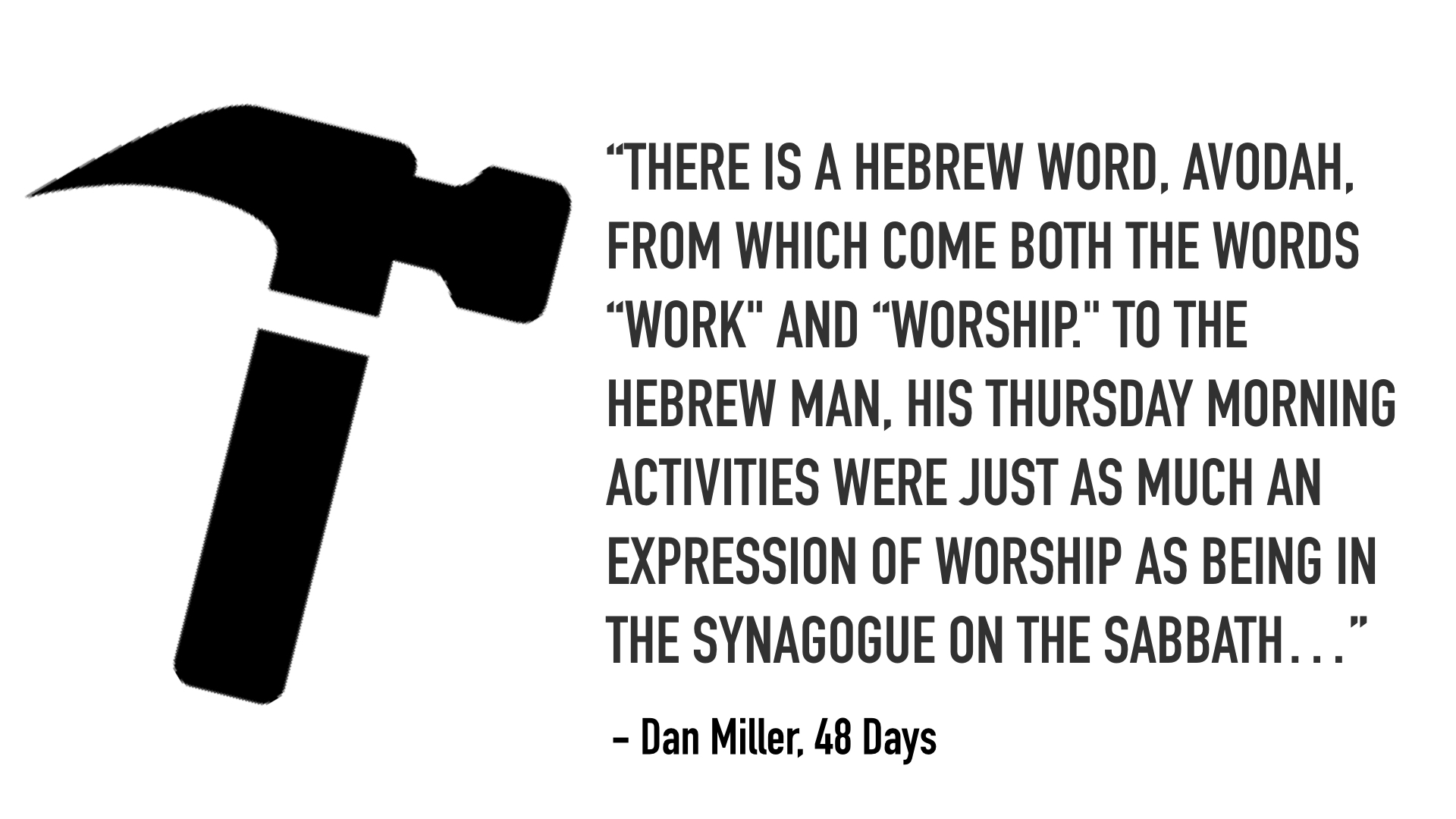 Anyone can hear that voice

Dan Miller wrote a book, 48 Days to the Work You Love, in which he pushes people to pursue that voice- that calling. He reminds us that in the Biblical mindset from which Jesus lived, there was no distinction as to who was called and who wasn’t…

“There is a Hebrew word, avodah, from which come both the words “work" and “worship." To the Hebrew man, his Thursday morning activities were just as much an expression of worship as being in the synagogue on the Sabbath. Nothing in Scripture depicts the Christian life as divided into sacred and secular parts. Rather, it shows a unified life, one of wholeness, in which everything we do is service to God, including our daily work, whatever that may be.” 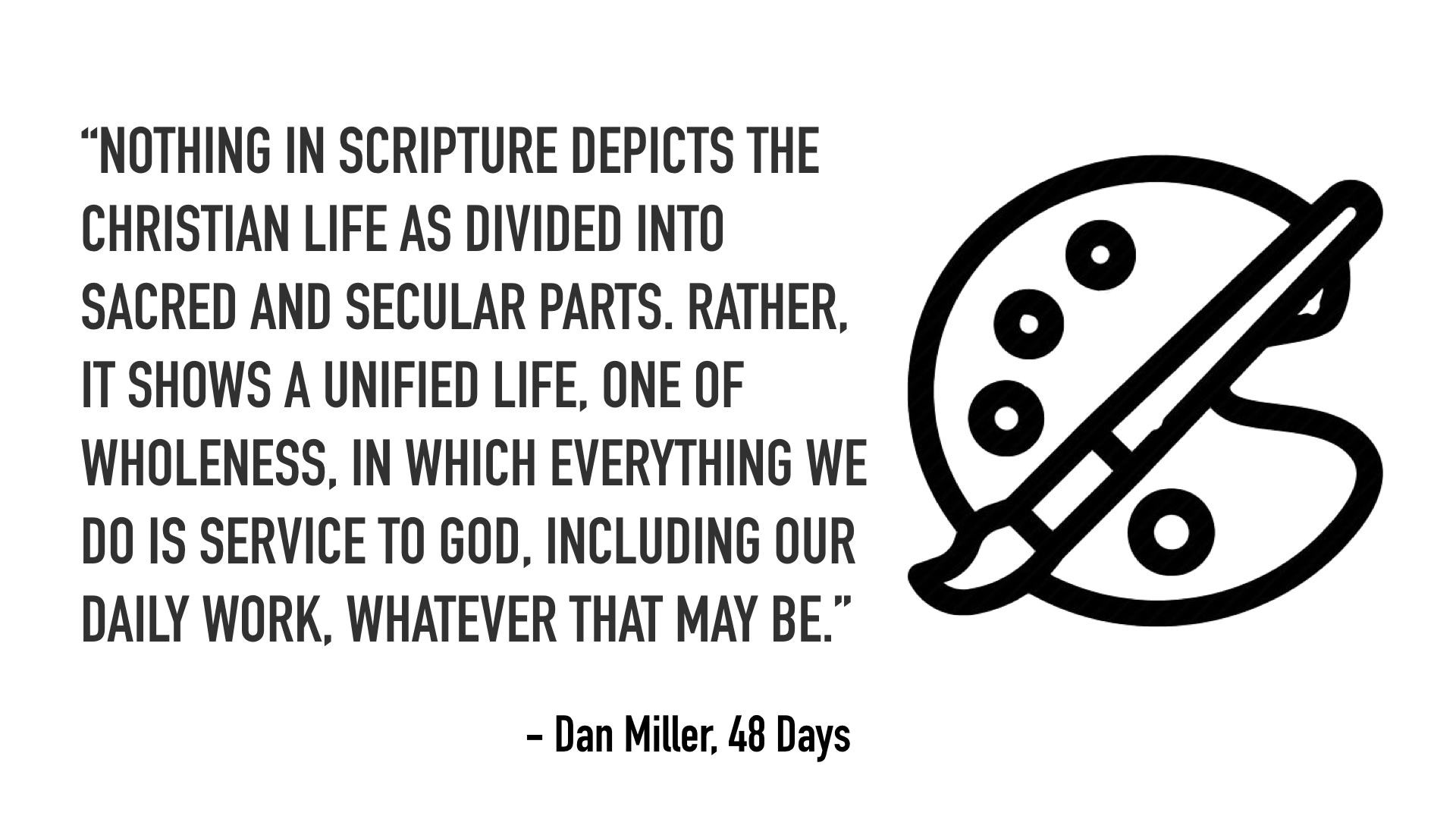 This isn’t just a “spiritual concept"- this idea about work being connected to a deeper purpose. Webster’s dictionary (full disclosure: I looked this up online and not from an actual Webster’s book!) defines work as "bodily or mental efforts exerted to do or make something; purposeful activity.”

Work is purposeful. Meaningful. Intentional. It adds value, because work places the touch of the Creator somewhere in our world, even as it uses human instruments to do so.

The opposite of “work” isn’t laziness, it’s toil. And toil is that sense of striving and laboring that lacks purpose, lacks meaning, and lacks eternal intention.

Work is not simply punching in and punching out, passing through hours on a time clock, exchanging time spent doing something you don’t want for the money that you need.

* If you hate your work, you're not really working. You’re toiling. True work flows from something you love, no matter how grand or small it seems to others.

* If your work is disconnected from the life of the Spirit, you're not really working. True work is totally connected to worship, however it is that you define that term.

* If your work lacks purpose, you're doing a “job,” instead of living a calling.

True work was not a result of the Fall, toil was. Work was given to Adam before sin entered the equation- to serve as a process for Him to stewards Creation and add value to the world around Him- a world that was already very, very good. 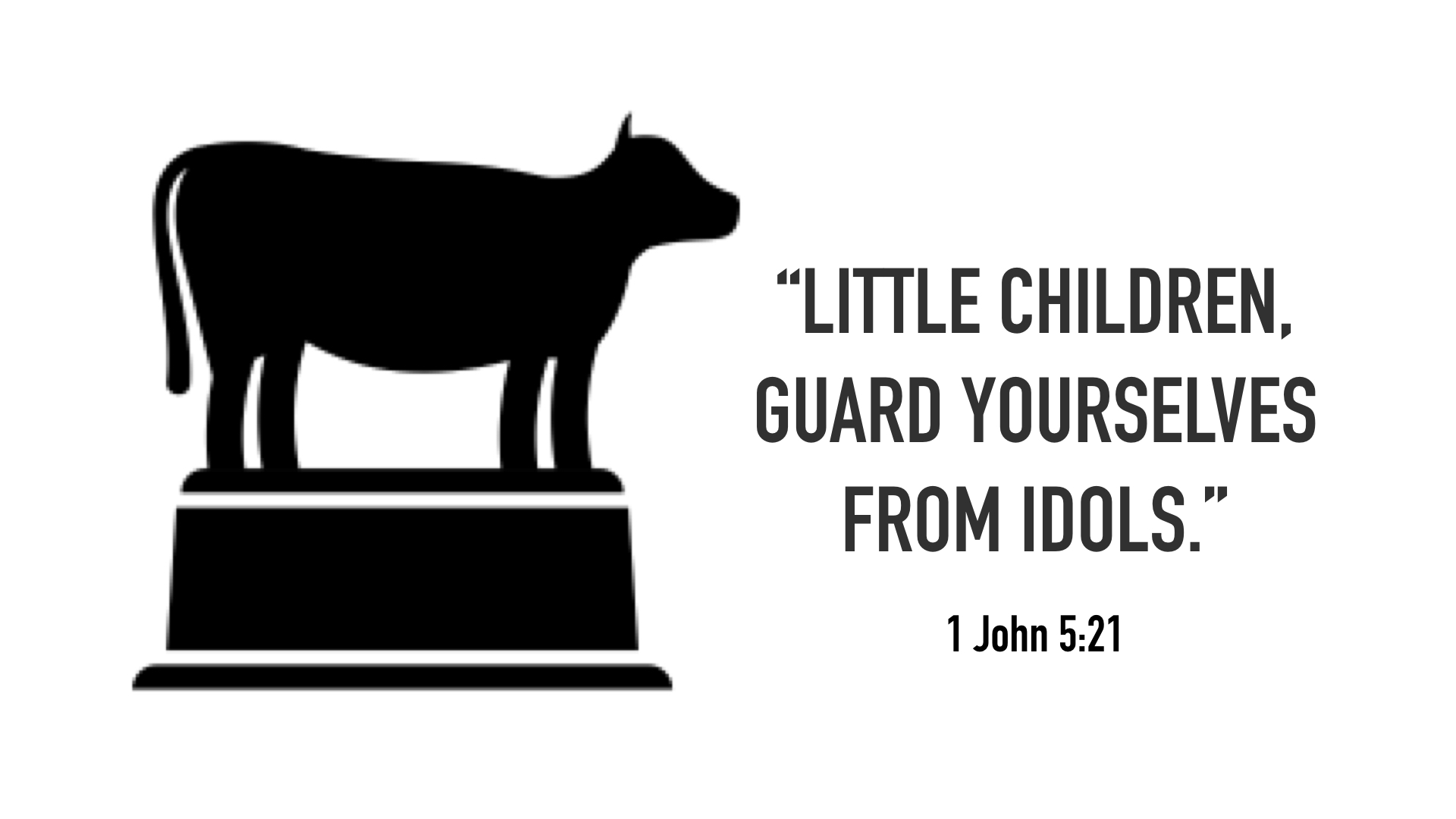 The Apostle John wrote the Gospel of John, the Book of Revelation, and 3 letters to his church (1 John, 2 John, 3 John). The verse above is the way he  “signs off” his first letter, warning us to stay away from idols.

Read the entire letter (it will take you less than 15 minutes), and you’ll notice that this seems like a strange ending to the entire message. You see, I always thought John was about the counterpoints of things like-

However, John ends the things- seemingly- abruptly… with a conclusion that we should stay away from idols?!

In 1 John 5:19, just two sentences earlier, John says, “We are of God, but the world lies under the power of the evil one.” 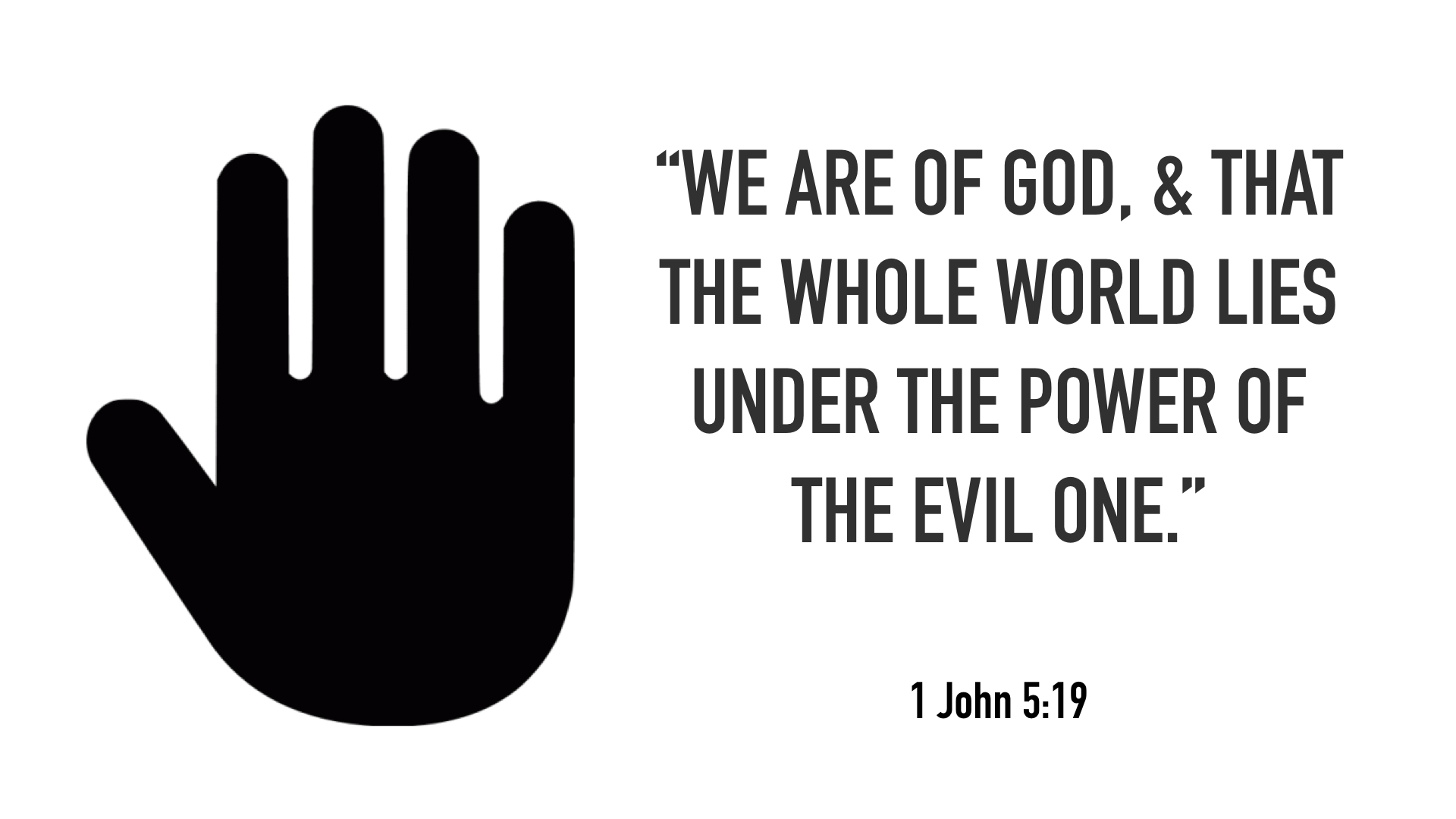 On the surface, that sounds like a logical statement. And, we could even put them together- “There are evil influences in the world, so don’t make any idols out of any of them.”

Strong’s Concordance sheds some light on this passage. In this verse “evil one” is better translated as “the toil.” That’s right, our translators went to the obvious- “the world is evil.”

John, however, is giving us a more subtle message. He’s telling us that the world is under the influence of- get this- toil. That’s right, “The whole world lies under the power of toil” (1 John 5:19). Whereas God created us- and empowered us- to work; we tend to toil.

It's not just what we seek, it's also how

John isn’t just showing us a juxtaposition between us and “the world” (when did Christian become some anti-“the world,” anyway?). He’s highlighting something else we all know that we want to steer clear of… toil.

(Note: we discussed this in a previous post, that Jesus doesn't just redefine the object of our seeking, He actually reframes HOW we seek in the first place- www.WeOverflow.com/Seek.)

Who likes toil? None of us, right?

What exactly is toil? Well, to toil is…

In his book Money & the Prosperous Soul, Steven DeSilva says that toil is “an oppressive force that separates work from its intended purpose.”

He then does an interesting exercise. He basically observes, “Notice what happens if we exchange the words in other common verses.” 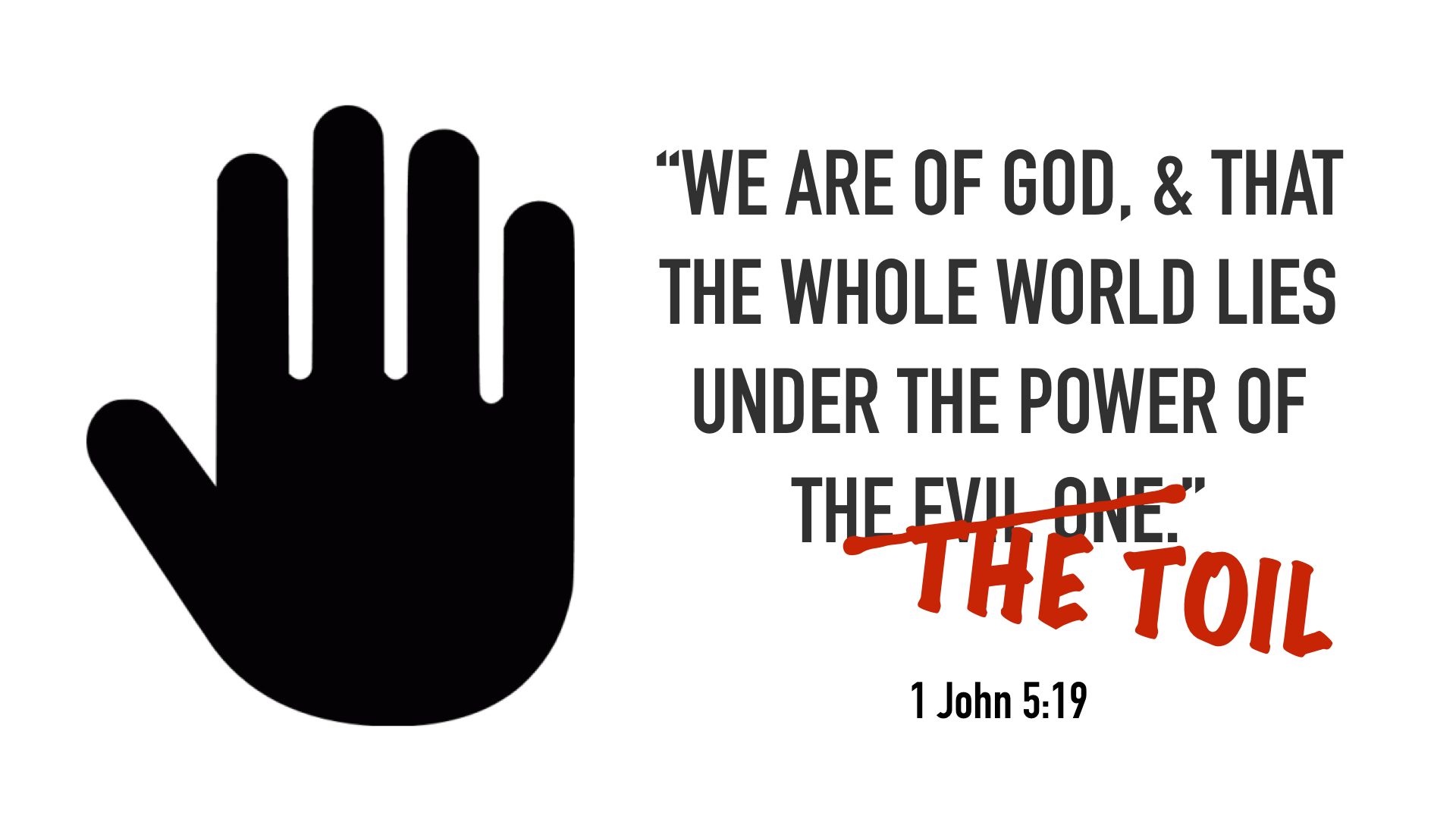 What are the most important takeaways?

Well, notice Ephesians 6:16: faith and trust actually shield us from toiling- from rushing to the tyranny of doing everything, and of being able to (instead) focus on the things that matter most. When we lean into the heart of our Heavenly Father we get a sense of, “He’s got this… we don’t have to strive for it… No more toiling…”

It's interesting, then, that the final phrase of 1 John is "keep yourselves from idols…”

It’s easy for us to fill our schedules- toiling, chasing things, seeking after stuff that was never part of God’s design for us- things that were never part of our life plan to begin with. We chase things because someone else has them- as in, we weren't even thinking about it until we saw someone else with it (just like toddlers, right?!). Or we struggle for things we never wanted because a commercial, an advertisement, or an online newsfeed says it's a "must have."

It's odd.  “We live in a day of irony, in which our society has more labor saving options available than ever, yet embraces a culture of jet-setting, multi-tasking, hyper-speed business”( DeSilva, Money & The Prosperous Soul, p99). In other words… toil. 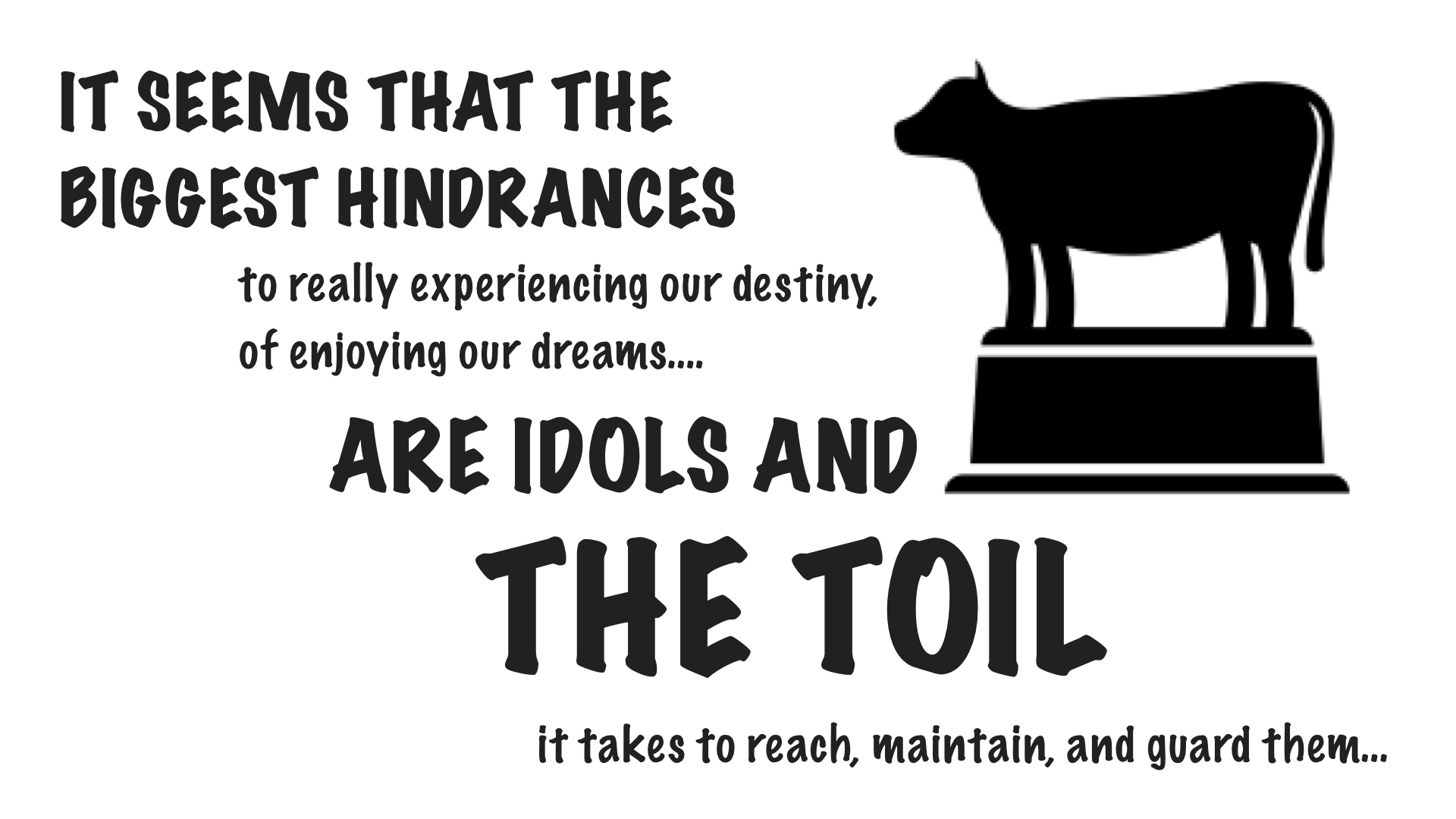 When we see that something is holy, that it's accomplishing a greater purpose, that work is redeemed. It's meaningful. It elicits passion. Purpose.

When we sense that it's not meaningful... that it's simply a chasing of the wind... it feels, well, more like toil.

You might also like The Ladder, the online workshop where all of this info is taught- go to www.TheLadder.info for more details. 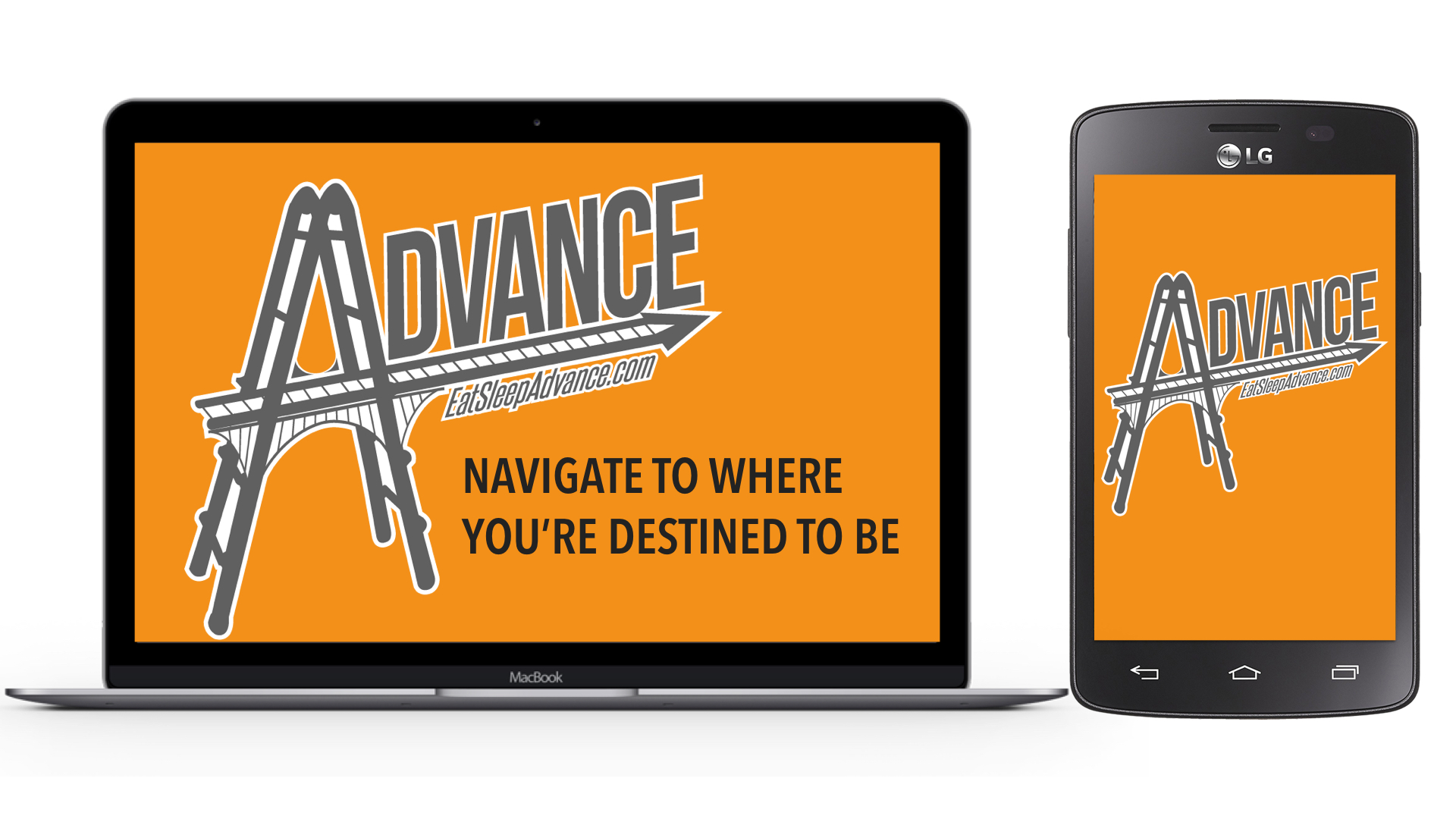