Video: Being realistic about the change you want to see

Several posts ago I talked about the importance of defining where you are AND where you want to be. Both are important. (This assumes you’re looking for change in some area of life, of course. If you’re not, scroll to the next post.)

If you don’t know where you want to be, then there’s no way to make a plan to head in any particularly direction. You’ll just find yourself, well… wandering aimlessly.

The other side of the equation is important, too. If you don’t know where you are now, then there’s no way to define your next step…

After defining these two “locations,” you can start moving towards your destiny…

Your mission = what you do

I always tell guys at the Advance events that they should view the dreams they listed in the first chapters of our workbook as “mission statements.” The fitness goal, the financial hurdle, the faith focus… all of it should be viewed with that kind of intensity.

If those goals DON’T seem important enough to be a mission, go back to the drawing board. Life is too short. Choose a giant that’s actually worth slaying.

If they DO seem big enough, then guard them, prioritize them, and move towards them! 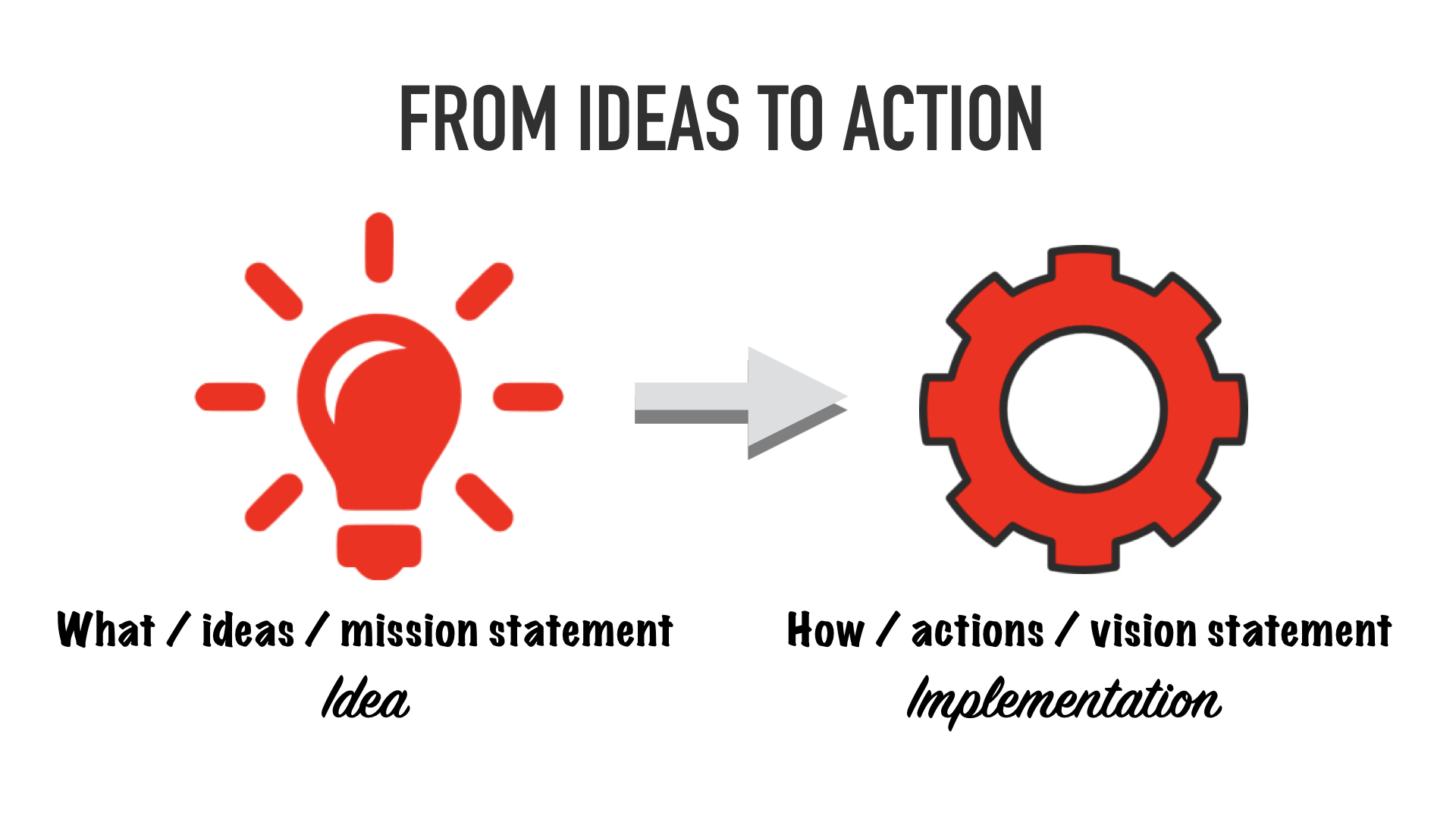 Your vision = how you do it

Mission statements were HUGE with businesses about a decade ago. Everyone took employee retreats and created slick-sounding sayings that made their way to websites, business cards, and newsletters. Even churches moved from using slogans and catch-phrases to using full-bore mission statements.

A few years after that, a new trend emerged. Rather than describing WHAT they do (the idea), businesses caught on to the notion that the implementation may actually be more important than the idea itself. They began articulating vision statements.

Notice, there is a difference between the “what” and the “how.” Both are important. Whereas the mission statement touches the “head” and communicates in the world of ideas, a vision statement is where the “rubber hits the road.” Vision speaks to application- to “how” things really happen. Vision moves the mission from ideas to implementation.

Because of that, vision is where you begin to uniquely express yourself…

That is, we can implement the SAME goal in DIFFERENT ways. The same vision can take many expressions...

For example, Nordstrom and Amazon both desire to deliver an excellent customer shopping experience. That’s their “what.” One does this via big box retailers, though, with a meager online presence; the other does this primarily through it’s online superstore.

(The same idea = customer service; a different execution = online vs. in person)

Another example… most churches agree on similar things (the “what”). But they do things very differently- different music, different types of buildings, different dress codes, etc. (the “how”).

This is true of every dream you have- you’ll have your unique expression.

In other words, you can do the same WHAT with a different HOW. 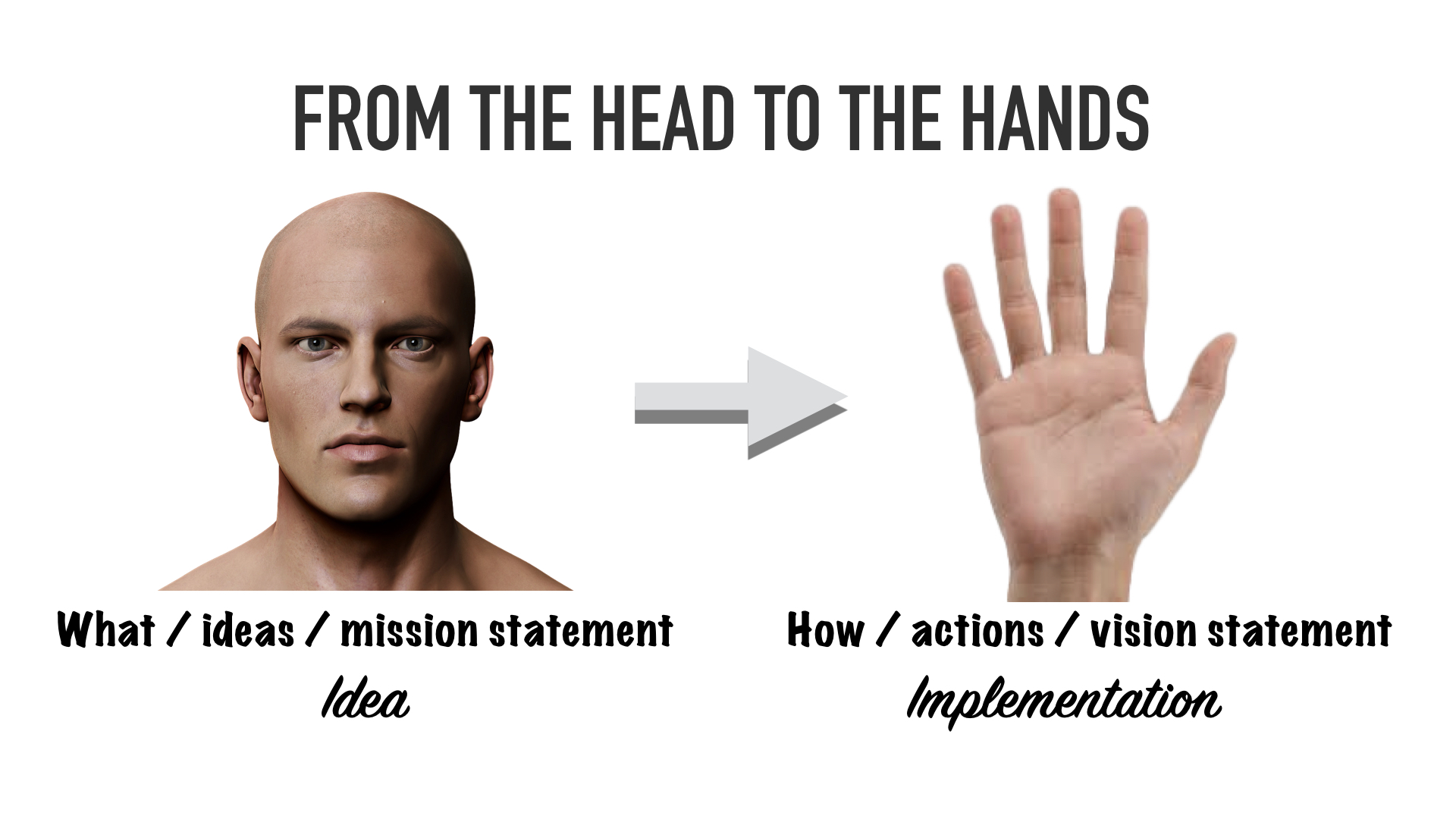 That said, realize that success is more like following a recipe than finding the right lottery ticket. Like any recipe, there are certain ingredients that must be present or the "cake" won't turn out right.

(So, this doesn’t give you permission to do things that are NOT part of the success recipe. This gives you freedom to explore the varieties of things that actually are as well as do things to the "cake" like decorate it, add icing, etc.)

Here are two things that means-

#1- Most of the things that create success are part of a proven process. You can look at what others do and you can follow along, getting similar results.

In other words, a lot of the guess work is taken out of it…

Want to lose weight, you know how to succeed…

You get the idea.

#2- there’s no shortage of success to go around. Often, we look at success as if it’s a lottery ticket. If someone else wins, that means you didn’t. It means you CAN’T, in fact… that it’s IMPOSSIBLE.

There's enough to go around. We can all win. We can all help each other. We’re not in competition. 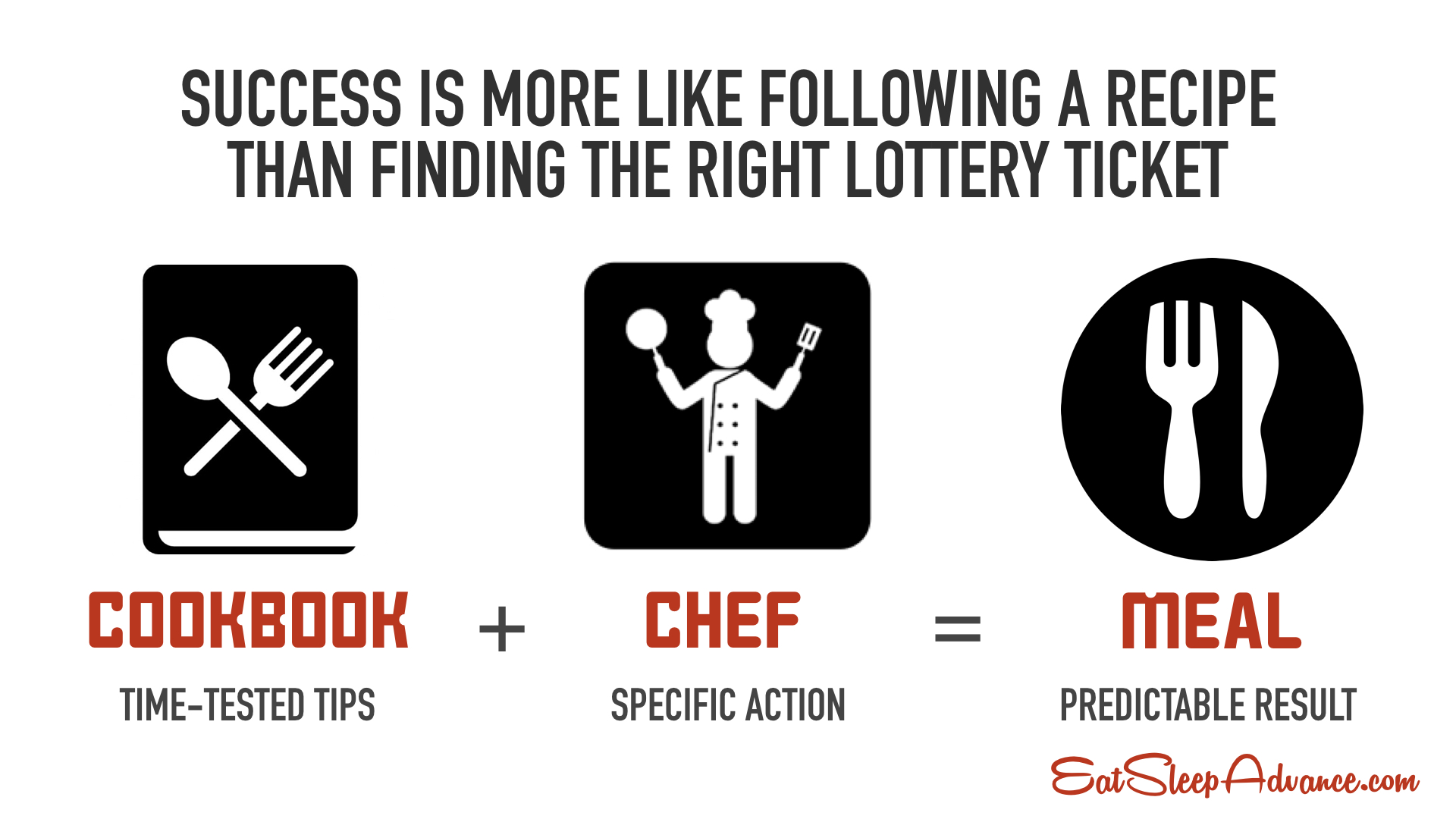 That said, let's hit the biggest point about success- about implementing your vision...

Most success takes more time than people are willing to invest. Sure, it’s easy to look at people who “succeed quickly” and think that something’s wrong with us when things take longer. They may have won the lottery, or they may have a LOT of work “in the kitchen” before we ever seen them…

The reality is that most chocolate cakes have the same ingredients and cook for about 20 minutes at 350 degrees. Very few people- unless they have some amazing tools or other factors that come into play- get a legit cake in 5 minutes. The recipe includes BOTH the ingredients and the actual time required.

Which leads us to this point:  Most success is created by doing small things consistently well, over time- not by doing a big thing once.

The issues with these “small things” are two-fold:

In other words, doing the wrong things won't help. You’ll just be “busy.” And, not doing the right things long enough… well, you won't reap the result.

After living four decades, I’ve noticed that most people DON’T fail because they lack talent or skill. Or because they have a bad idea. Even in the things I’ve failed at, I notice this trend is true.  Most failure is due to a lack of investing the time + consistency required... 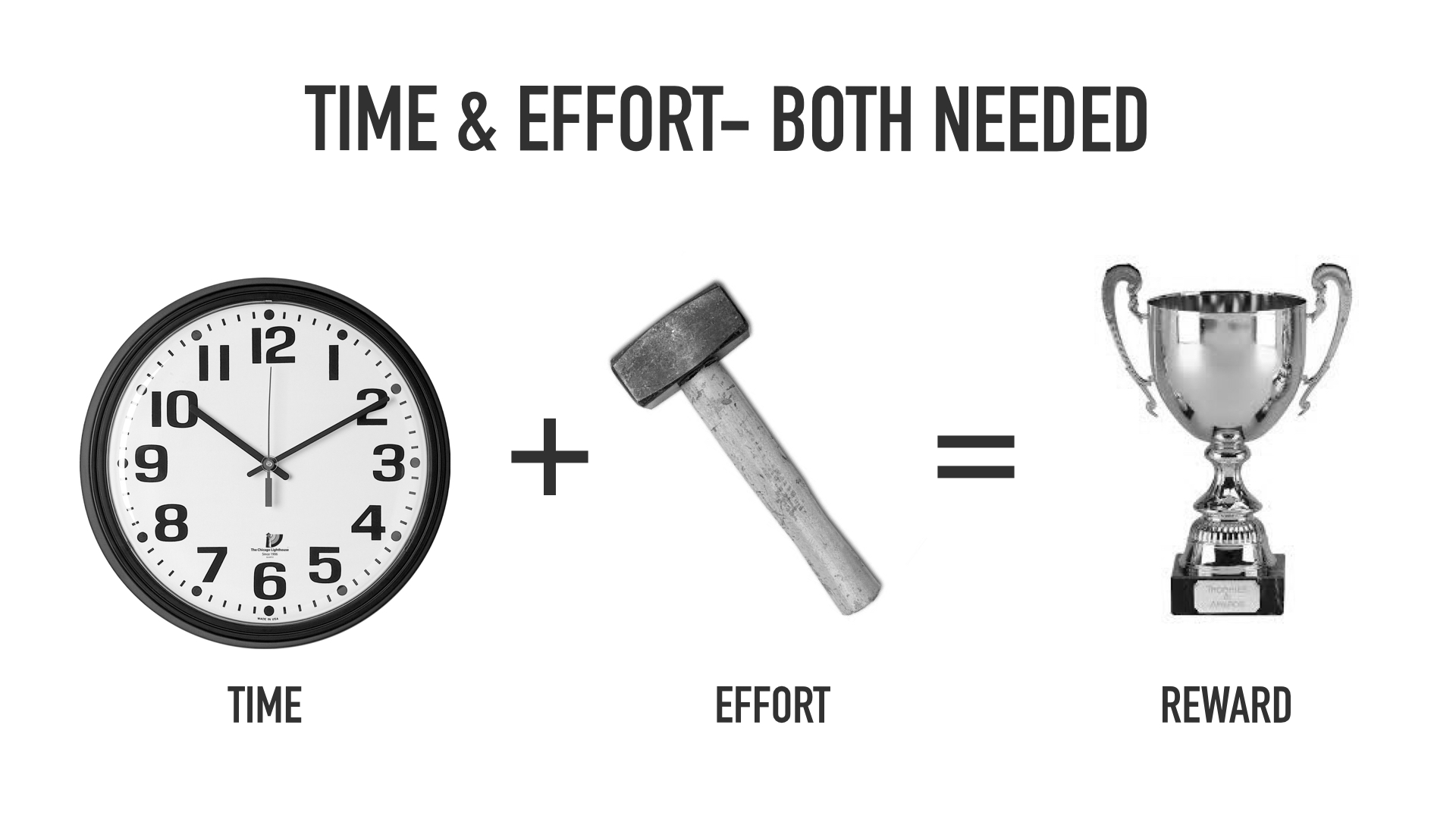 Most people who don’t succeed fail because of one of the above factors: 1) not enough time, 2) not enough consistent effort on the right activities.

The people who don’t succeed… well, it usually boils down to the two factors we’ve already mentioned. Success requires time and it requires effort.  If you do the “right things” for only a short period of time, your chance of success diminishes drastically. If, on other hand, you take  long period of time but don’t do anything… well, success requires both.

Thankfully, success leaves clues- in every single area of life. Notice the graphics above. Success is like following a recipe. If we look at people who’ve succeeded in the areas we want to achieve something, we can take clues from them. In other words, we can see WHAT THEY DID and we can see HOW MUCH TIME it took them.

Review what you’re implementing- and ask the tough questions

That is, we want them to make sure the efforts they're about to do are worth it- that they'll actually get a good result from their energy output. (Again, success leaves clues. It isn't random. So we can see what others have done and adjust our sails accordingly.)

In addition, we always encourage them to take stock of the “time” issue-

Do you see what happens when we ask these questions? Yeah, it reveals where things really are…

We have business builders on our Young Living team that consistently miss training opportunities and big events- even those are two of the factors that successful builders actually attribute to their success. In other words, these efforts are part of the success recipe. Implement these and your closer to your "cake."

Missing one opportunity isn't the end of the world. Life is full of trade-offs. But, if you're missing every single opportunity, you need to step back and be honest with yourself.

In this instance, they need to admit the truth. This business isn’t their dream. Or, if it is, they haven't come to terms with the actual cost. It’s something that’s a good idea, but if they’re not willing to invest the time and energy… if there not willing to move this from a MISSION to a VISION… from a WHAT to a HOW… then, really, it’s not theirs…

They don’t own it.

Or they want to own it yet work so little at it, that they CAN’T SUCCEED because they’re not willing to invest the time + energy that successful people invest in it. Remember, success is a recipe. That means you need the same ingredients and the same time (20 minutes for a chocolate cake) to create success.

Anything less and you’re fooling yourself.

Let’s apply it to other dreams-

Both are important. A little time dong the right things is as ineffective as a lot of time doing the wrong things!

Finally… prepare to do the invisible things that make success visible

Another word about success. Everyone swims under water- even AFTER they’re successful and can walk on it. That is,  most of the actions that create visible success are unseen.

Here’s the tricky thing about success: Most of your visible success will come from the things you do that no one else sees. Just like the iceberg. Don’t compare your daily grind to someone else’s moment on the stage- or their highlight reel. Everyone who walks on water first swims under water! And, there's nothing on the list they get to stop doing even after they're successful…