Every person that gets anywhere learns to swim underwater. In fact, they learn to hold their breath for a very long time. And they often do so in isolation, wondering if they surface will come.

Here's what I mean.

A few years ago someone told me about icbergs. No doubt you've heard this before. "You only see 10% of the iceberg," the saying goes. "90% of the iceberg exists beneath the surface."

Of course, in this analogy, the guy was using the metaphor of the icerberg to describe character flaws beneath the surface of our lives. Unseen things we hide. Things that left unchecked can bring things as big as the Titanic down in a night.

I know. You could add more things to the list. We've both seen it. Multiple times.

The myth of overnight success

Last year, a friend of mine who's been wildly successful in business spoke to a group at Advace 6.0. Half lumberjack-looking-Harley-rider, half professional-brainiac, totally gracious and whole-hearted, Scott Schuler told the guys that their overnight success was anything but instant...

Yeah, it was chisseling at  dream, bit-by-bit, simply pushing through the journey, swimming underwater.

So what is swimming underwater?

As I listened to Scott speaking- from a place of tenderness and transparency- it hit me. We look at everyone's moment on the stage and assume it just happened. In fact, as I was writing this I thought about Dorothy in the Wizard of Oz. We assume some magician or fairy simply waved a wand, the person clicked their heels a few times, and- boom!- they were home free.

Then I'm reminded at the journey for Dorothy was hardly a few clicks of the heels. It was a long, yellow road that wound through treacherous places and was filled with lots of obstacles. That is, her road was full of trials... tribulations... tests....

Maybe success is like that. We see everyone else's highlight reel, so we tend to compare our daily struggle to that.

Success doesn't exist without the journey. There's nothing overnight about it. Or, for the few for whom it is, it's more like winning the lottery instead pulling a rabbit out of hat (a learned skill, by the way, that takes magicians years to master). 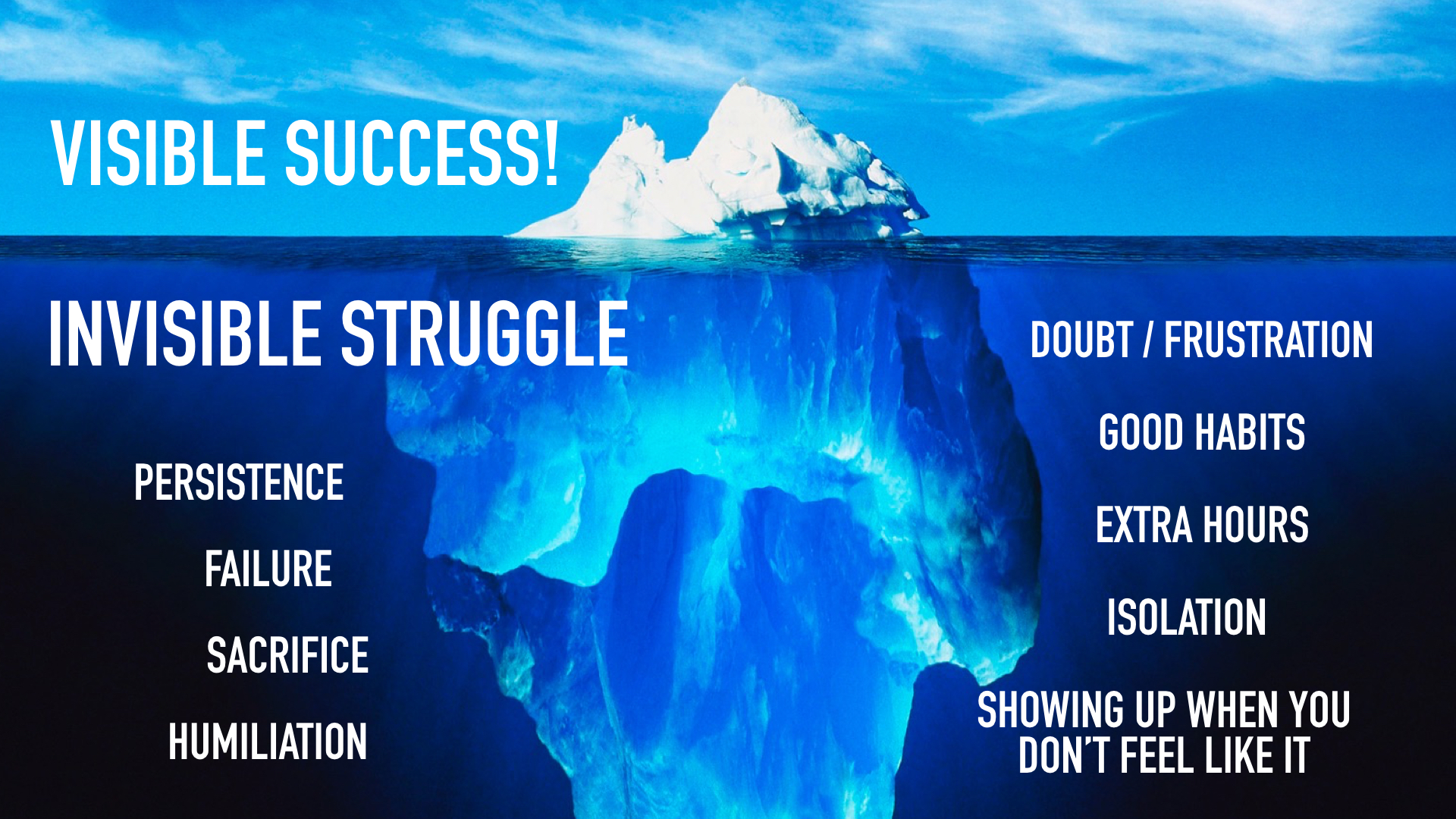 It also means some people are drowning

It also means this- some people, quite frankly- aren't swimming. They're drowning. Or treading water at best.

I'm more open to seeing it now, because I spent my own long season treading...

This past Fall I subbed for Cristy at a local BNI (Business Networking International) meeting. The organization has chapters throughout the U.S.- evne the world- where like-minded professionals meet once a week to learn about each other, their businesses, and help each other succeed through strategic connections. They probably have a chapter meeting in your neighborhood, in fact.

You're only allowed a few absences a year, so you're encouraged to find a sub when you must miss a meeting. That way, your sub can learn what others' needs are, they can present your own, and they can continue the dynamic conversation of everyone moving forward together. Then, they can report back to you.

We live a few blocks from the meeting location of Cristy's chapter. I visited a few times with her, got to know the group, and regularly get phoned-in when someone needs to miss the meeting for.

I'm the group's "professional sub," I tell them. "I enjoy to ride with Cristy to the meetings, and I'm cheap- I'll work for the free coffee they serve each Thursday morning."

One day I was subbing for Cristy...

That was rare. Usually, I subbed for others. In fact, I've only stood in for her that one time.

I arrived early to help greet people as they arrived- a job she typically has each week.

There were just two or three people there setting up when one of the members approached me and asked, "Hey, who are you subbing for today...?"

He asked if she was sick.

In that moment, I made a decision. I could say, "Yes"- and lie. Or, I could tell him the truth. Normally one to hide, I opted to reveal what was happening. You see, we were swimming under water.

"No. She's tired. Emotionally, we're threadbare. It's been a long year. I told her she should sleep in and rest... that I would cover for her."

I could see, sense, and feel that my friend was listening. Somehow, the words I was speaking were serving life and breath to him...

I continued, "In these meetings, everyone hi-fives and fist-bumps. We talk about how great things are. How business is growing. How excited we are. Things like that. The truth, though, is that most people are hurting... they're tired. Drained. They need a hug- not a handshake."

Or- to use our analogy here- we stand on top of the iceberg. We don't reveal that hard work it's taking us to get there. Or that there are painful, trying things under the surface of life, too...

Turns out, it's not just them. It's us. And everyone else in the room. All of us. Couldn't we just own that, have a big group hug, and start stepping forward together? Encouraging each other...? Calling out the greatness within each other- and pointing to the destiny that was just ahead...?

Would it really be OK if someone walked into church this Sunday, mascara running down their face...? Would we think someone was crazy if they said they were really, really struggling... and didn't have words for how, why, or what for... but that they were just overwhelmed...?

On the surface- the 10%- this guy from BNI looks incredible. Well dressed. Nice looking. Amazing family. Two kids + a wife + a house.

And, I'd say that under the surface, the character is solid. He's incredible there, too. That 90% is NOT going to implode like I talked about in the beginning of this post. In other words, he's swimming underwater not because of character flaws that he's hiding but because, let's just be real, life is hard work.

Yes, he's swimming underwater most of the time. At least 90% of it.

And so are you.

What would it be like if realized that, yes, despite how bad things are right now, they will get better? And, that all success is proceeded by effort and time- swimming underwater?

And what would it mean to the people with whom we come in contact every day if we treated them as if they've been holding their breath for a long time...? If we took the moments not just to chit-chat or fist-bump, but to infuse life and hope into them... to acknowledge their diligence... to honor, even, their struggle... to assume that they might be barely holding themselves above water, treading the wake through their tiredness...?

What if instead of starting on top of the iceberg we all approached each other there...?