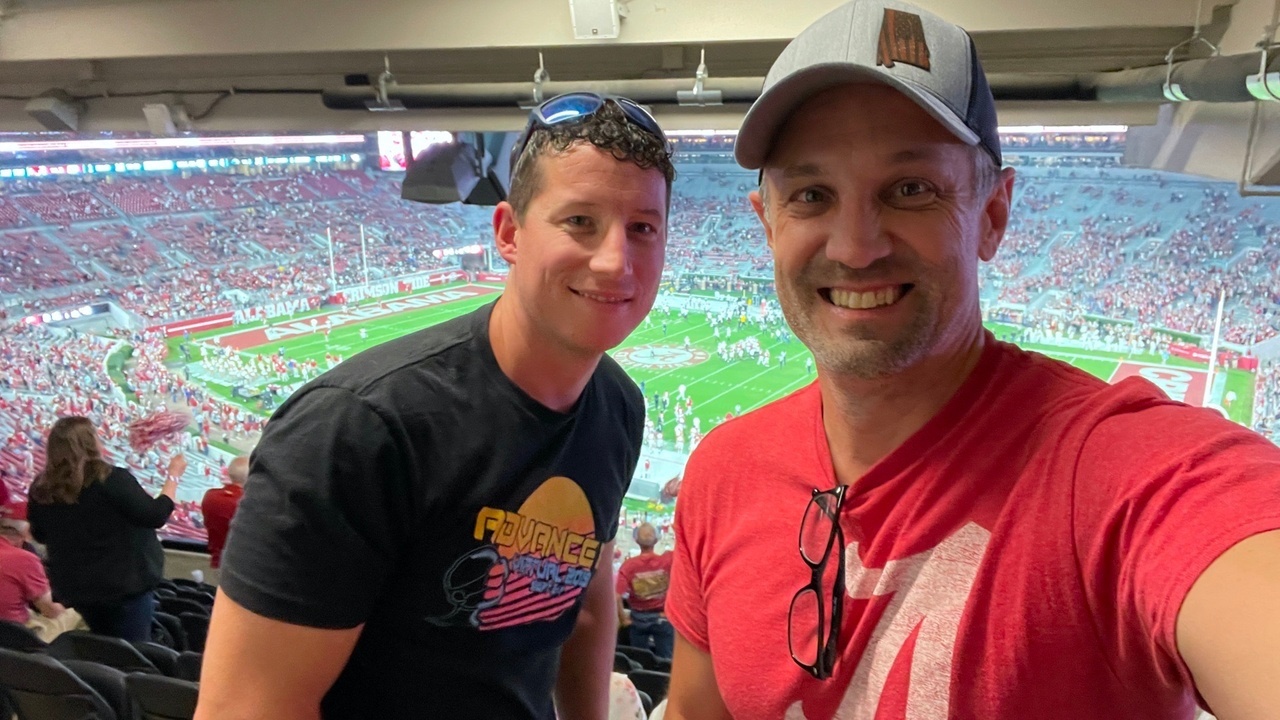 Each week I look at my calendar, on Sunday afternoons— I review the previous week and look at the week ahead.

For every day of the week, the planner includes FOUR days— a two page spread for planning, as well as a two-page spread to review your day, along with journaling prompts. I always record the top 3 things I'm grateful for that day, as well as a few lessons learned, things I could have done better, etc…

You can download the PDF of the hardback version of the planner I use totally free at www.Jenkins.tv/FreePlannerPDF.

Fitness = highlight in this area was this mid-afternoon run this Thursday.

That was a “smashed-up day.” I found myself penning some notes for the upcoming Soul Wholeness / Freedom March group intensive (see if it’s a good fit for you, here: https://www.jenkins.tv/FM-app) AND a new project I’m working on with my friend Shawn Lovejoy from Courage to Lead…

The Freedom March group intensive is a 5-week program that helps you put INTO practice the concepts I wrote about in Soul Wholeness. One of the (sometimes surprising) tools for emotional health is to exercise— because it causes our brains to work more logically than emotively, it fires the parasympathetic nervous system (the opposite of fight vs. flight), and more…

Now, I wasn’t overwhelmed or stressed-out that afternoon. But, I knew I needed to shift gears from finishing the Freedom March workbook to working on Shawn’s Courage to Lead project…

... it was an important meeting we had scheduled.

It was the perfect break.

And, even though I wasn’t “running to work,” my thoughts flowed and I honestly feel I got more achieved mentally on that run— for the next project— than I would have sitting at my desk.

I place the “Soul Wholeness” videos here: https://www.jenkins.tv/blog?tag=soul+wholeness  — one of the upcoming entries I’ve scheduled talks about the importance of movement as it relates to mental stamina and emotional health.

Late spring / early summer, Beth and I were able to build the foundation for a residual income stream in the personal development space.

(Always open to telling you more about it, BTW.)

A few weeks ago— I’ve mentioned this before— we took a trip to Vegas, where I spoke at the first summit for Oola Global, as part of that project. As I reviewed my notes— and slides— I began dropping them into a Pages file (Apple’s word-processing program).

The result was a book— super-practical, for anyone in the Oola Global movement (register for notifications + updates at www.Oola.biz ).

For the past few weeks, we’ve had a small crew of people editing the book and watching the companion videos (they’ll be available in the new LifeLift app, BTW, which has already been submitting to the app stores and should release soon, as we have 50+ people test-driving that, too!).

I hope to hear back from the graphic artist this week— and post links to the book by mid-October! 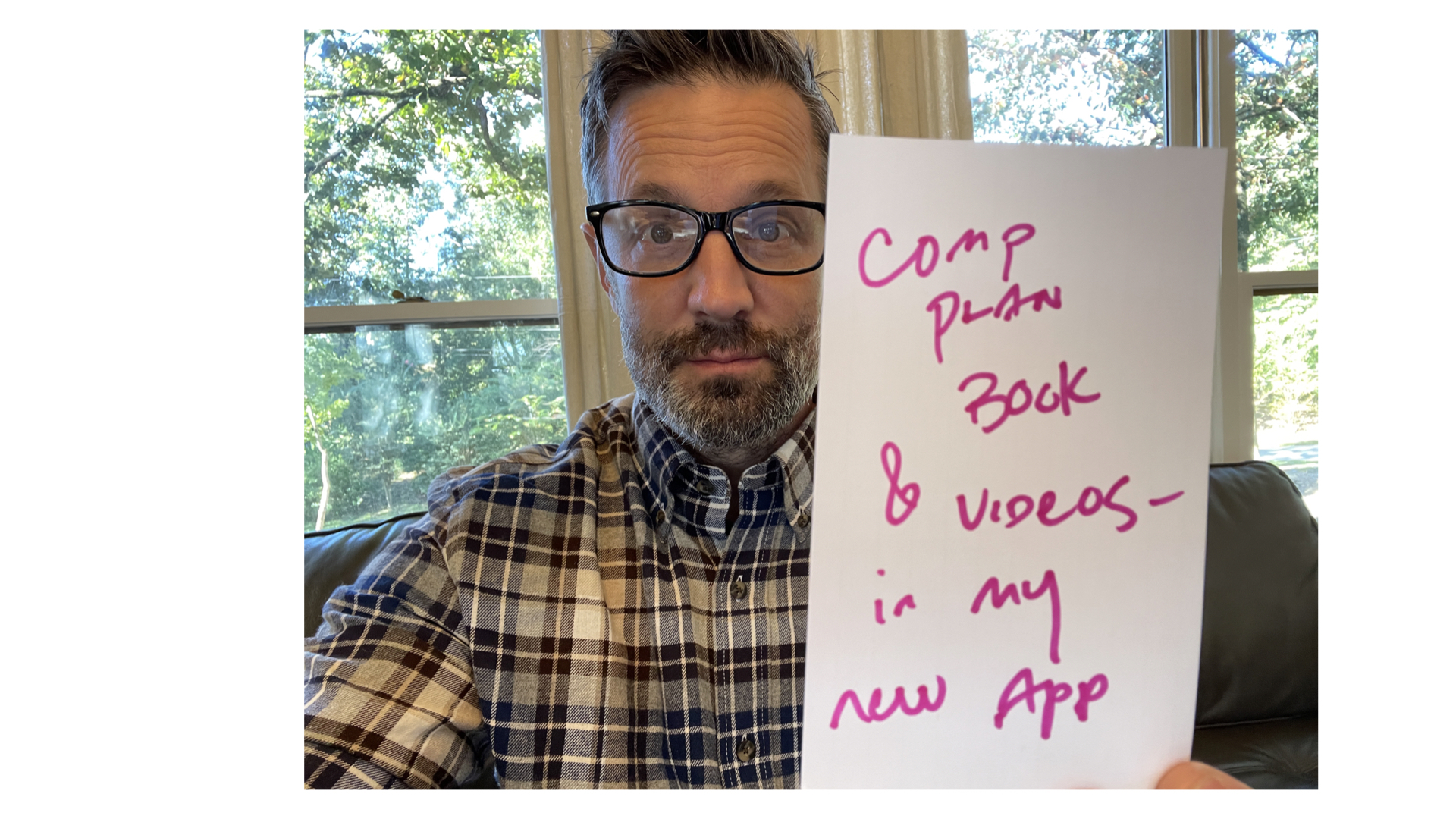 Family = A few weeks ago, Beth and I decided that Wednesday was the official “date night,” regardless of how many projects we had rolling, how many people were in town or at our house, etc…

North Italia (which is close to the house, and good, and has become the go-to when we can’t think of anything else.) 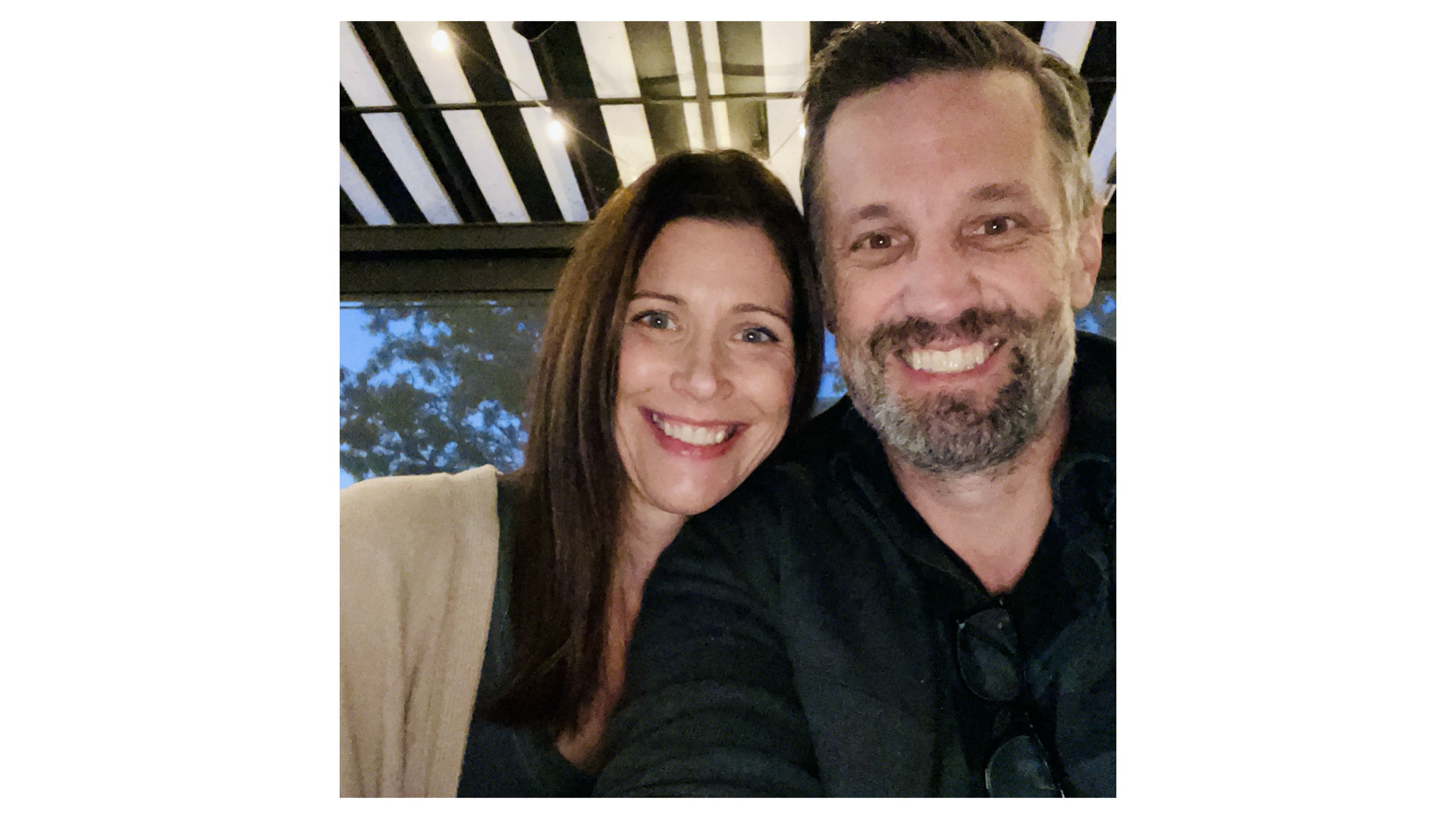 Field = Last week I asked for 50 testers for the new LifeLift app (there’s a longer story I’ll share about the name in another time— or on a podcast episode). I’ve got MORE than 50 (which is even better).

The app will have—

⭐️ the podcast (which will also be available on Apple Podcasts, Google Play, Spotify, etc.)

⭐️ other free resources… designed to move you from where you are to where you’re designed to be, so you can live at the next level…

As well, the app will feature some paid content (which will unlock the same courses on the website):

Faith = Last week I was reminded, again, the God really writes the end from the beginning, and that He knows all things (see Isaiah 46:10).

A month ago, a (great!) company reached out to me about doing some content development for them. To be clear, I didn’t approach them, they approached me. And they did so-- the guy who would have been responsible for hiring me-- after seeing what I was posting online.

That means they knew what I write, the topics I cover, and the overt slant towards faith. No surprises, then.

But then they told me I was too faith-driven, that I had too much background in churches, etc...

It actually shook me a bit— and I would still love to do some work for them.

Part of the rattle was likely do to carrying some past shame, and I had been clear with them about my story…

Had they rejected me for that?

I knew it wasn't my ability. The reality is that I would have saved them money WHILE ALSO making them money at the same time-- I radically more efficient than most people, especially when operating in my zone.

Was it really just the faith-spin on things, and perhaps a lack of confidence that I wouldn’t— or didn’t know how to— keep faith removed from the “front and center” when required to do so?

… I remembered the verse on the shirts we gave to our friends and family at our wedding (Romans 8:28), and the statement on it: All Things, All Times, All for Good.

Two weeks later, I boarded the plan to Vegas (for a totally secular business event), dropped my notes into a book, and knocked it out of the park for my talk (I’m critical enough to own when I bunt or strike out, as well as confident enough to acknowledge when I “nail it”).

And, let's be real, if I was working on a project for this other company, I wouldn't have had the mental bandwidth to wrap those notes and graphics into a book. So that project would have never happened...

Plus, I crushed it in Vegas-- at a totally non-faith / business event (I'm self-aware enough, I think, to own it when I strike out, as well as acknowledge it when I smash it out of the park-- and still work to make it better then next time up to the plate).

Two incredible companies-- don't miss that. Both of these places are awesome.

Both are full of amazing leaders, robust vision, and will do extremely well. I would— and still hope to— do something for both.

But, I’m reminded to continue living with gratitude for what we DO have and trusting, placing faith ahead, for what we need… and for where the journey goes.

Friends = this past Tuesday was the 3rd Tuesday of the month, which means a monthly cookout at the #Hilltop.

(I failed to grab a picture!)

The next one is scheduled for October 19, and will likely be connected to an app launch party. More details to come. If you’re local, though, mark the 19th!

Saturday I got up, worked out, took a shower… then settled on the couch.

A few minutes later (literally) I received a text from my friend Greg (pictured below).

Somebody gave Greg two tickets to the Alabama football game— one was mine if I wanted it.

“They’re in the Crimson Club.”

Here’s what that means—

✅ You can go indoors if you’d like, sit on a couch, and watch the game on the big screen(s)

The “live” games in the stadium are great. The Crimson Club… totally different experience. 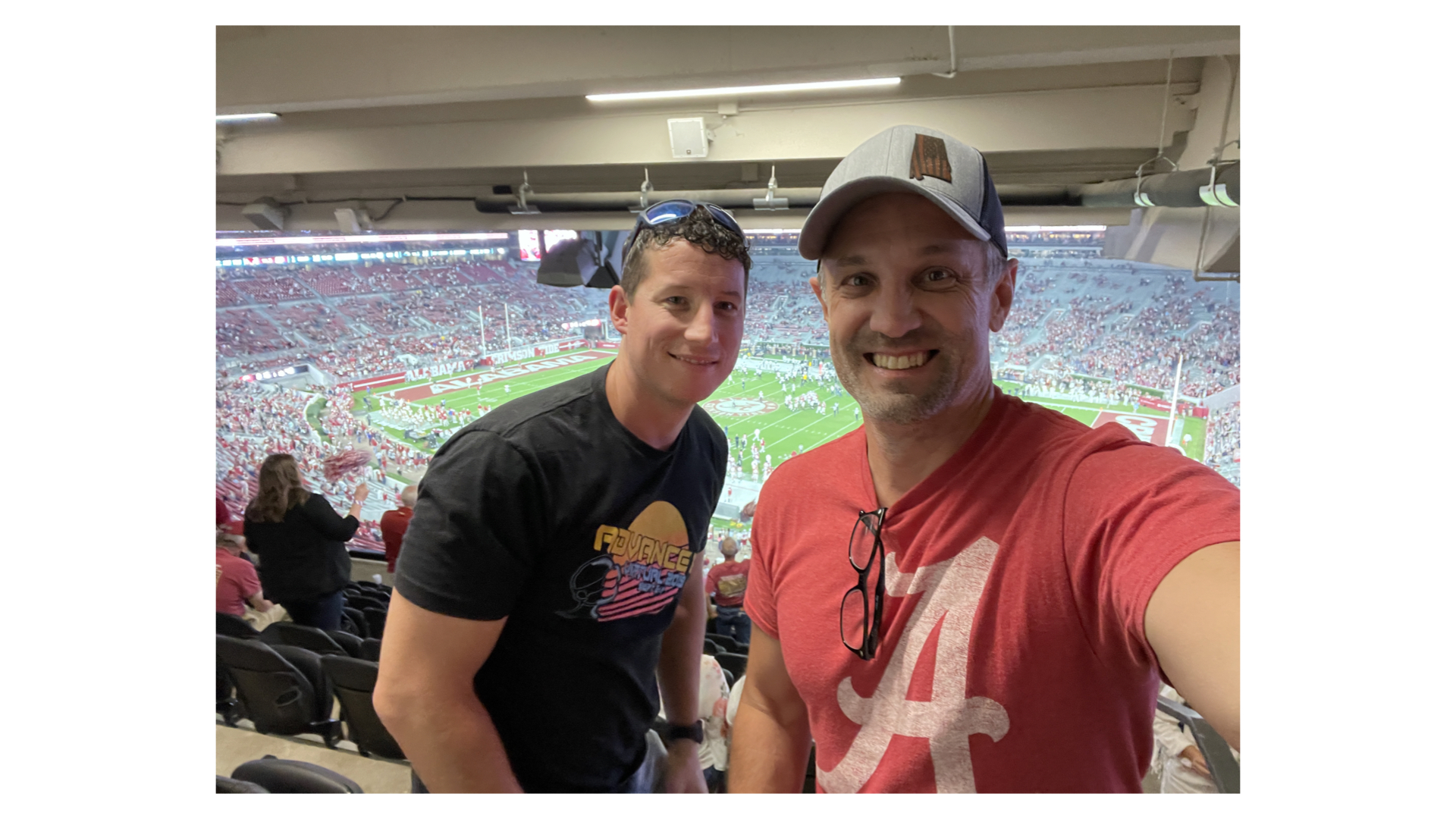 Emma was in town for the weekend, so we grabbed lunch— Beth, Emma, me— at a nearby Mexican restaurant. And then I headed to T-town.

Before I did, though, I snapped this pic as inspiration for the courtyard outside the #TinyHouse… perhaps a Spring project. 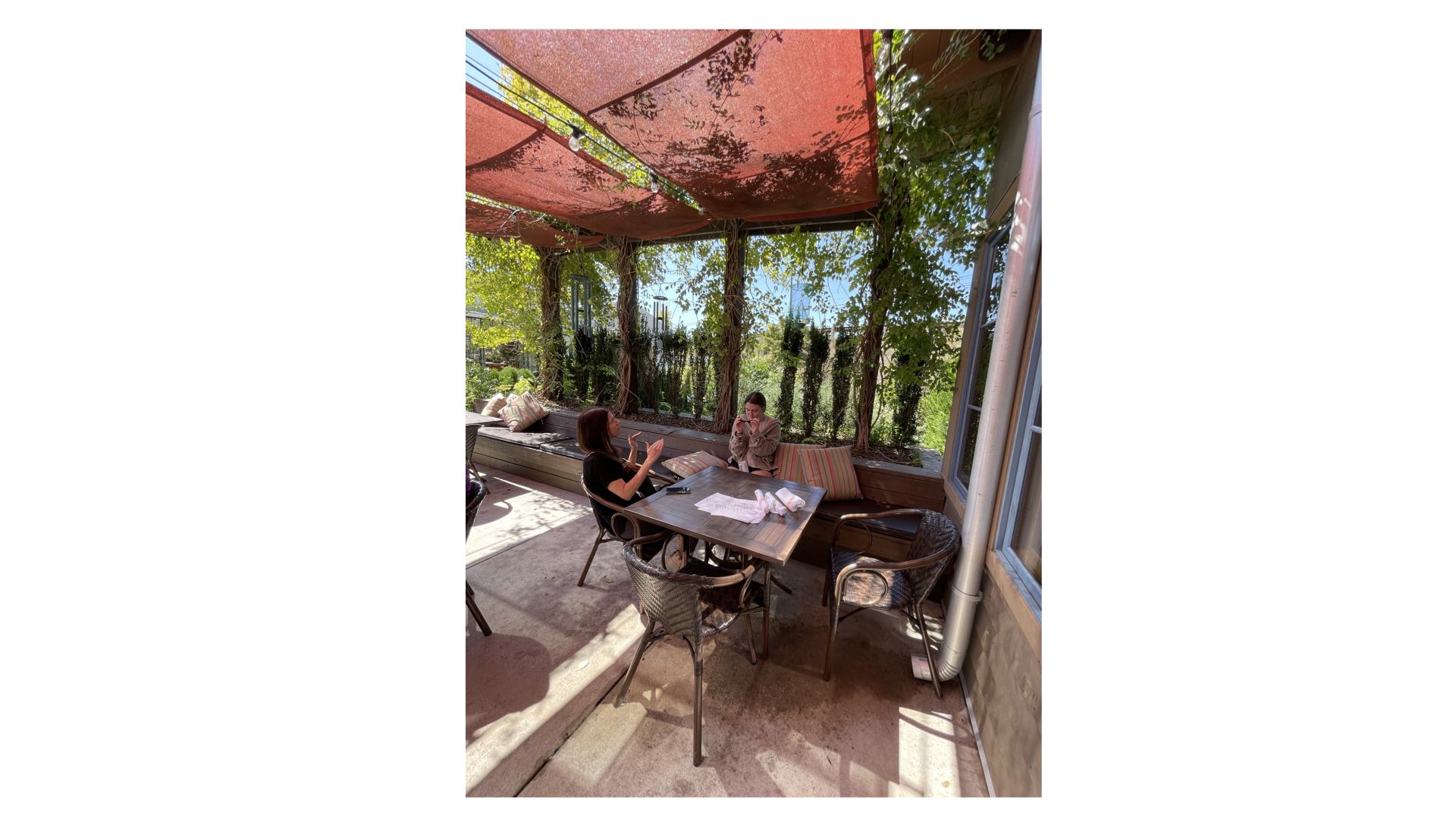 That’s the highlight reel for the week. As always, there are highs and lows— and everything in between. Grab your free planner at www.Jenkins.tv/FreePlannerPDF.