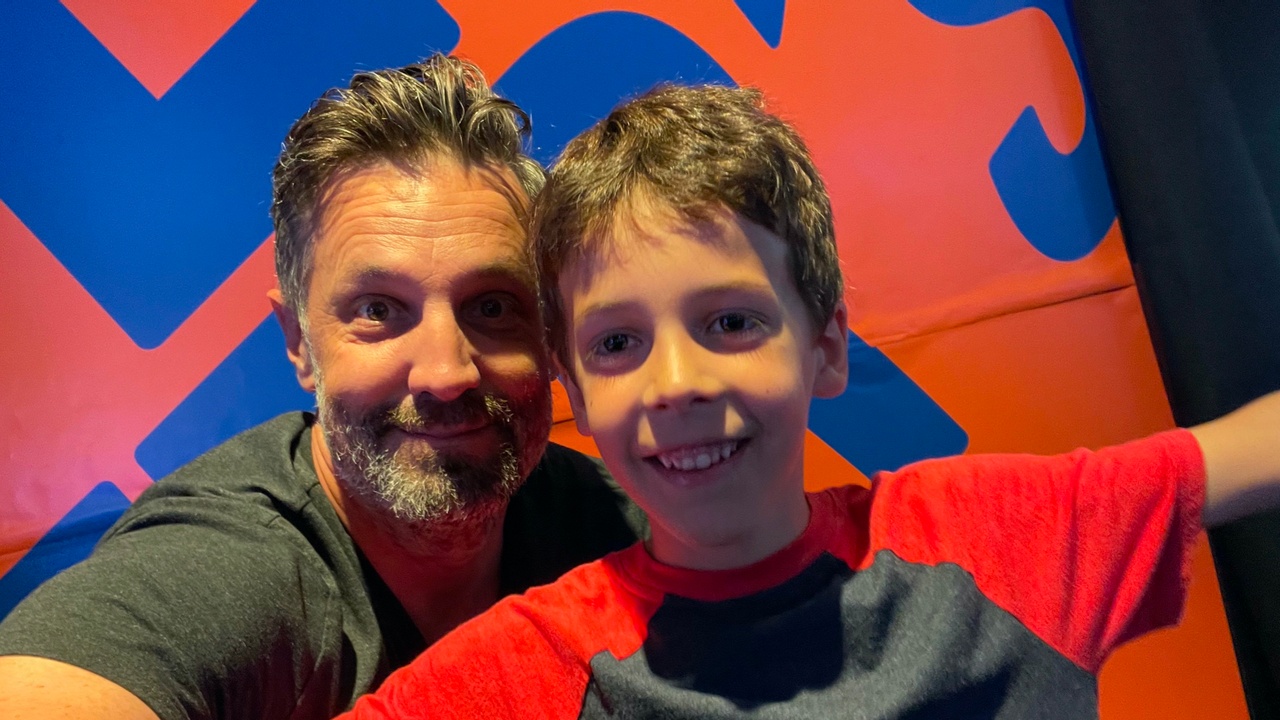 This week I was able to finally put words to a few important lessons… ideas about family, work, and misaligned loyalties...

🚌 Fitness = the run in Franklin

This week I traveled to Franklin. My friend, George Grant, oversees a church, classical school, seminaries for pastors in the Middle East, and more…

I’ve done some work with him to a launch a website, get some of his books back in print, and more. This week, we had a morning of meetings and recorded two podcasts. So, it was a great opportunity to make my loop in Franklin.

This week, the kids finished the school year. Beth & I told them that we would take any of them who wanted to go to Dave & Buster’s (was Salter’s request-- above is a pic of us at the entrance).

Here’s why it relates to finances….

Two hacks for you.

✅ Whenever we take the entire family out to eat, we always let the kids eat snacks before we go— if they want. We don’t let them “spoil their dinner” at the house, when we cook-in. But, if we’re going out, it means they order less…

✅  We told the kids that they didn’t ALL have to go play games at Dave & Buster’s. Only the ones who WANTED to go.

Face it. D & B isn’t quality time. It’s fun. But you generally hang out— and watch— the littles, not all of them…

And, the littles are the ones who wanted to go.

So, we went with Sauce + Mini.

The others stayed at the house and played games, had friends over, etc… and we were able to connect with them that evening.

We spent LESS and they were able to play MORE.

It was a sweet deal, in my opinion.

Levi suggested we order the cheese curds for an appetizer…. And then he jumped straight to desert. That is, he literally ordered chocolate cake with ice cream for his main dish— which he enjoyed while I ate a Buffalo Chicken Salad.

(And this reminds me that I've got to do a better job of grabbing pics of this stuff.)

Everyone always worries about their job— or the work they do. And, oddly enough, we often choose those people and the project we’re doing there over the people who matter the most.

This past season proved... well... interesting.

I was given the opportunity, with Beth, to jump in on the ground floor of an opportunity to join forces with some friends to impact one BILLION people in a positive way over the next seven years.

(Of course, there are no guarantees as to income in the project or what it might mean…)

I naively thought people at projects where I had been working for the past seasons would be excited about the new endeavor— and cheer it on. Therefore, I was extremely transparent about the opportunity and the possibilities of moving forward, thinking I could maintain loyalty to both.

Turns out, I thought wrong.

I had two parallel experiences...

Bob, the founder, has been a "go-to" person of mine for years. With decades of practical leadership experiences, he oozes wisdom.

When I found myself trudging through a divorce a few years ago, he believed in me, offered me projects to do in alignment with what his team had already been doing for years, and we broke some new ground. The result was the Warrior Hope manual, the video course, and more-- all built on the foundation of his two films.

With the new change, my roll with Crosswinds changed, but we figured out a way-- quickly-- to forge ahead.

In fact, Bob actually told me, "You need to take this opportunity. Especially if you and your wife have a chance to do this together. If it works, great. If it doesn't, you can always come back and do this again."

So, I'm doing some behind-the-scenes work with his team during this season.

Second, another team proved, well... not so easy.

Some of the leaders from another organization (I feel) would rather burn the old things to the ground rather than figure out creative ways to forge ahead.

Books and courses which were created for one organization will be "pulled from print" (for a season, at least), because my name is on them (and my stories in them), for fear people might think the previous company is aligned with the next...

... and I was removed from social media feeds, posts pulled, videos erased...

... some videos even re-shot, slides removed from my versions and replaced on "new" ones, literally done late in the evening.

If it sounds vague to you, no worries... it actually feels that vague to me.

(Yet, in all of this, there was no conflict, be-setting sin, or relational strife... as far as I'm aware. I tell you, people do strange things when they're afraid of something they can't control.)

No discussion. Just a decision.

"We should shoot a video on the Facebook page and explain to everyone what you're doing now," a team member suggested.

"Sounds great," I replied. "Let's do it. That will build confidence in the brand going forward... and remove any questions as to what's happening with the transition."

But, four meetings later-- each set up to shoot a video-- nothing has been done...

After the third meeting, I reminded the team, "I've got to respond to questions as to what's happening, so let's do this at this fourth meeting. If we don't, I'll need to make just share it on my one social feeds, website, etc." And, I added-- "The only places that scrub people and erase them are churches, when pastors have affairs. I don't want any more questions like that... and this is starting to look eerily like cancel culture, erasure, whatever... because of something done wrong when in actuality everything has been done right."

I spent two-plus years pulling a project-- and some of the people attached to it as they endured personal challenges and other issues (after all, I've had my share of them and was helped during those seasons)-- only to be "dismissed" because my new opportunity might be a conflict.

During that season, I learned a lot about publishing, even more about audiobooks and podcasting, and a ton about social media. I'm grateful for the time I spent on the project, and thankful for the opportunities it presented...

The end was handled poorly, however. As great as the run was, endings matter.

In that end, people were afraid I would push people from essential oils to personal development...

... from products that help people live healthier lives to a platform that empowers people to find their purpose and live with less stress while achieving more balance and growth.

It's like saying I was going to transition people from eating carrots to reading books. Or from riding bikes to sleeping on a better mattress. There's no correlation, yet people need each of them.

There’s no bitter blood. This is just a reflection— and admission— of what we all know to be true.

Well, because we were going to discuss it together... and didn't. And enough of you have asked questions such that I needed a place to just say what happened... and say it one time.

And, there are lessons to be learned...

(Yes, this-- as a work through it in my mind-- will one day be a great #StoryForTheStage.)

Here's the main lesson for me...

Choose the people who matter the most. Your family. Every time. Many times we get this one wrong-- even in subtle ways. We misalign our loyalty in ways we don't need to.

In every other area of life, your presence is largely interchangeable and expendable. But not with your family. Be sure you’re fully present for the ones for whom you’re not replaceable.

This week we connected with a couple from Bend, Oregon— Tom and Julia Jenkins.

Years ago, the Lord gave her specific words in prayer as to the path they would take, where it would lead them, and the ministry they would have.

Beth & I met with them via Zoom, as they were contemplating joining  our #1B7 team.

Their story was similar to ours— in so many ways. And, even though there’s no relation (other than the name), it shows how connected we really are…

… and how God always makes good on His promises, even those He delivered to us years ago.

Sometimes you see it in your own life. It confirms it all the more hone you see it coming from someone else.

🚌 Friends = another lesson learned, in reflection

Make friends OUTSIDE of your “field.” If not, when your field changes, the friend-orientation shifts.

In hindsight, this is a lesson that’s good for all of us. Ideally, we’re friends with people whom we work with— because ewe spend so much time with them.

But, you need friends, and a support system, in other places too.

This week, I’ve placed it as one of my ongoing goals to make constant connection with people the Lord has brought into my life, so that those relationships are more tied to the PERSON than they are the ROLE, the JOB, the PROJECT, or any other things…

🚌 Fun = Beth + the lazy Saturday when you just meander and wonder…

This is actually one of the things that initially connected me to her, making me sense that she could be “the one.” Quite simply, it’s easy to spend time with her, to just be… alone and doing nothing.

Saturday, we woke up. I worked out, she did a few things she wanted to accomplish around the house. Then, we watched TV a few hours (Hule binge!). We drank coffee, talked, and then drove around to run a few errands…

Stopped and ate on the way— with no destination in sight.

With her, nothing really is something.

And it shows that—

👉 Fun doesn’t always have to have a financial cost (I’m grateful for trips to Dave & Buster’s— like this week— and visits to the waterpark like last week, but fun can be free).

👉 Fun is often connected to people moreso than a place or a “thing” you do.

👉 Fun often requires just stepping out of the urgency of work and production… and just enjoying where you are.

That’s my highlight reel for last week. As always, there’s always more that happened that I can digest in a few words. But, the act of sitting down on Sundays and reflecting BACK as a plan FORWARD reminds me of the grandeur of grace…

… and consistently demonstrates how God works all things together for our good.

Be sure to download the Advance Planner free here: www.Jenkins.tv/FreePlannerPDF. It’s the tool I use to map my week— and then look back at my progress.

And, if you’re interested in our newest endeavor, look at the videos at www.Jenkins.tv/7