Video: The most powerful force in the universe is literally in your hands

One of the first miracles Mark records is Jesus healing a leper (see Mark 1:40f.). There’s an interesting nuance about the entire story that I’ve read over and over and always missed…

Jesus touched the leper rather than simply healing Him with a word. Even though He heals many others with His words only. Even though He actually performs “long distance” miracles, healing events in which someone visits Him one village and asks for healing for a person in another village.

Why touch the leper?

It seems odd, particularly when you realize that the leper was healed as soon as Jesus spoke: “As soon as He had spoken, immediately the leprosy left him, and he was cleansed” (1:42).

Furthermore, lepers weren’t supposed to be touched. People believed that if you touched a leper that you, too, became unclean.

Perhaps that IS the issue here. Jesus touched him because the leper needed to be touched more than he needed anything else, including the healing itself.  To a person who has experienced isolation, human touch is powerful.

And, in this moment, it’s almost like Jesus says, “Hey… you’re uncleanness isn’t going to taint Me… No, My cleanness is going to empower you and make you whole!” 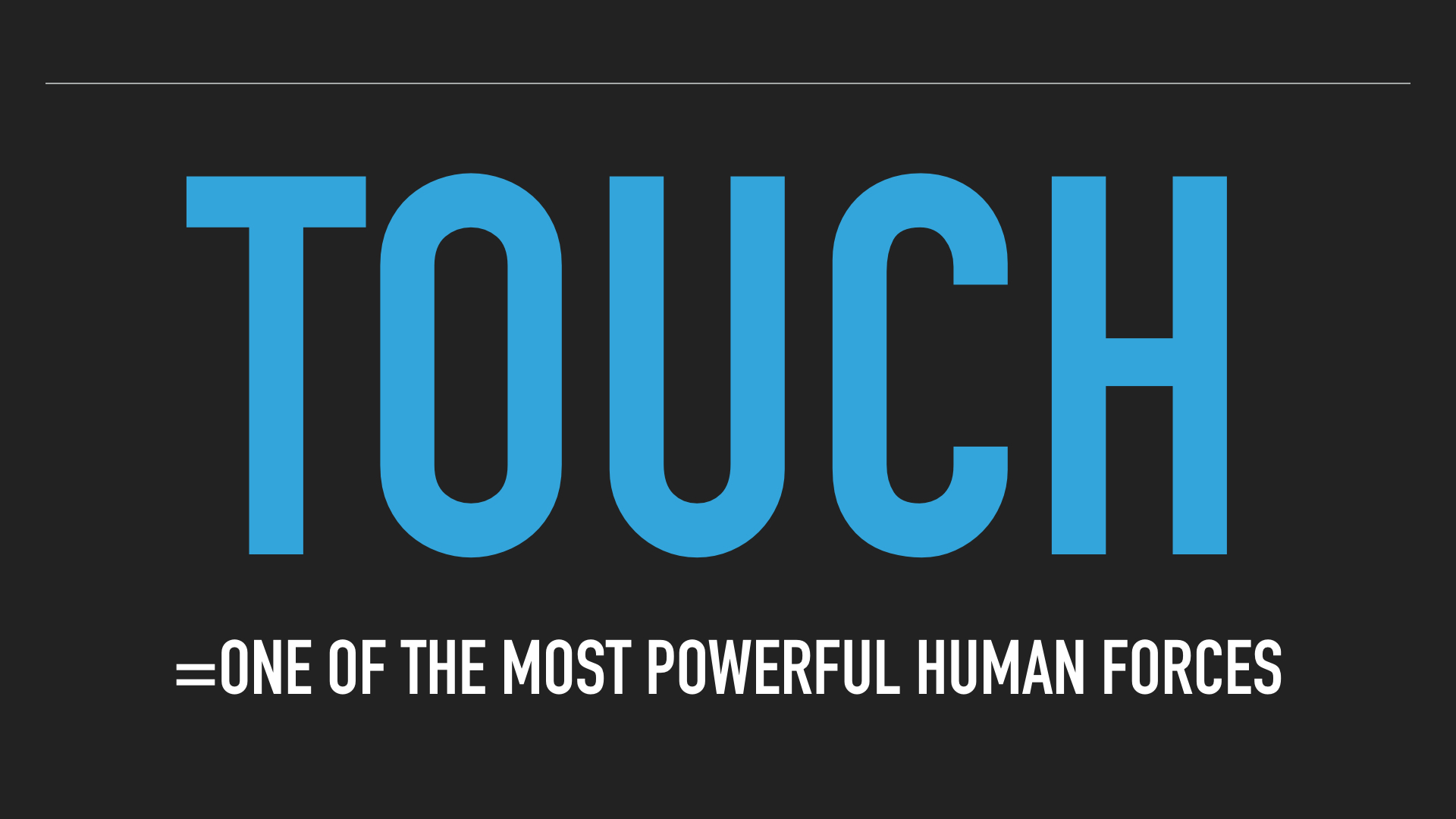 Here’s what’s interesting. Modern science suggests human touch is one of the most powerful forces in the universe. No kidding. Science ranks it that high.

As I was studying in order to create The Healing Workshop, I pulled together a few “outside resources,” things I could expose myself to gain a wider perspective. (If it’s true, it all belongs to Jesus, anyway, right?)

First, we can communicate purely based on touch-

“We come equipped with an ability to send and receive emotional signals solely [by touch]. In one experiment participants communicated eight distinct emotions- anger, fear, disgust, love, gratitude, sympathy, happiness, and sadness- with accuracy as high as 78 percent.” (“The Power of Touch,” by Rick Chillot, Psychology Today, published March 11, 2015). 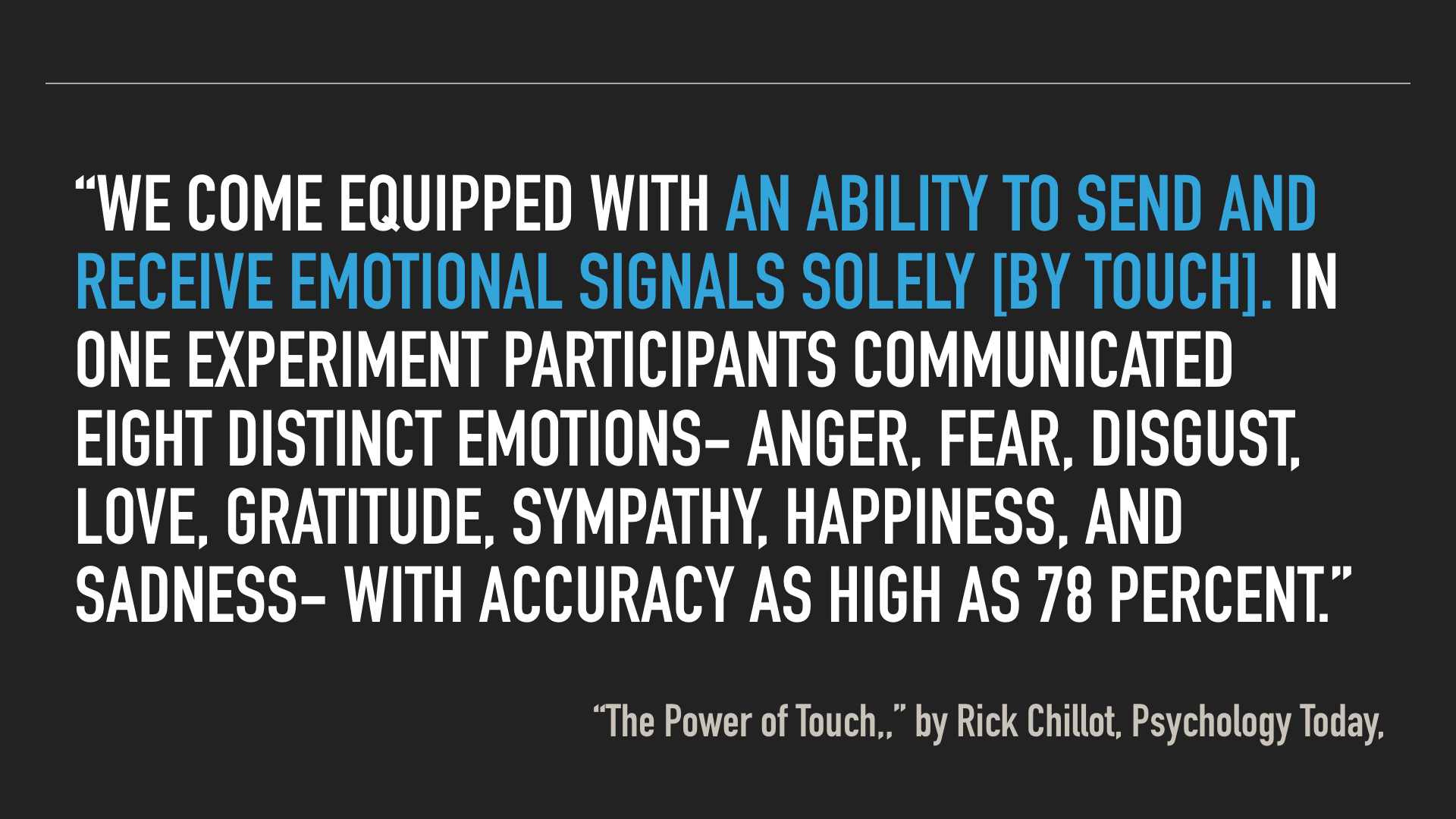 Did you catch it? 78 percent accuracy. Just by touch!

I know- you were probably looking for 100% as you read it. But, think back through the last week or so and recount all the times you’ve miscommunicated with your spouse, best friend, coworkers, and others even though you were using words. You probably got it right about 78% of the time, too!

In other words, touch does what words do with the added benefit of allowing people to physically feel the emotions and tone with which we’re communicating.

Second, I also read that touch alone can do things that therapies and self-help and other (great) forms of personal enhancement can’t-

“I have witnessed the power of healthy touch to heal, deliver, redeem, and restore people in mind, body, and spirit. Loving touch has the power to draw out the introverted autistic child, make an outcast teenager feel loved and accepted, or communicate safety to a battered woman. Healthy, loving touch reminds us of our God-given worth and identity” (“Have We Forgotten The Power of Touch?” by Nicole Watt, in Christianity Today, June 6, 2014). 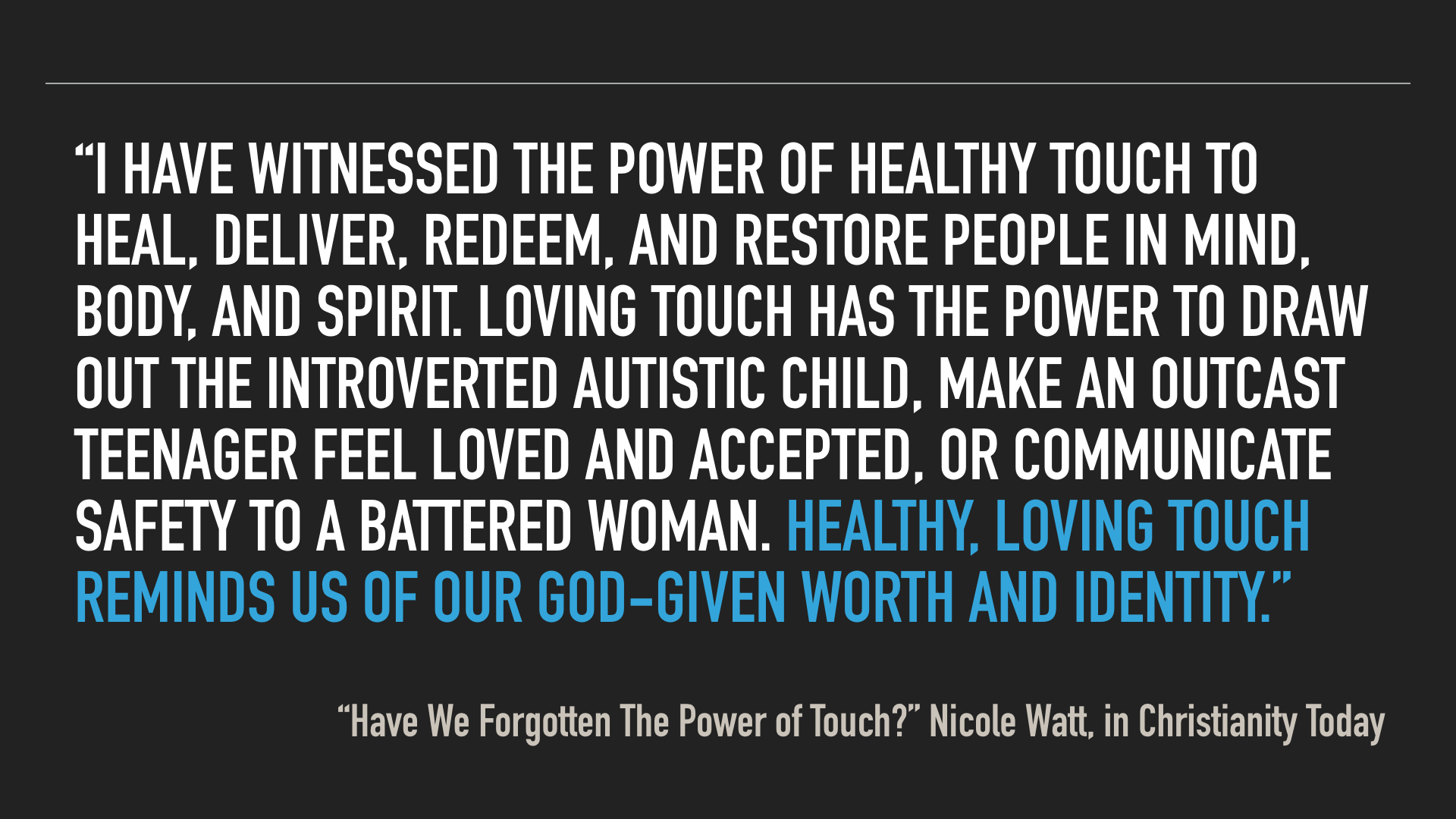 Think about it this way: when your spouse has had a rough week, when they’re disappointed or hurt, what do they want- more words or more touch? Do they want you to explain the week away, wash it with words to make it better, or just hold them?

Third, I learned that this is foundational to who we are- this “touch” thing. We’re relational beings. And that relationship ins’t just emotional, it’s also physical.

“According to neuroscientists, our brains are programmed for touch” (“Power of Touch a Transformative, Healing Force.” See CBN News, CBN.com, September 8, 2014). 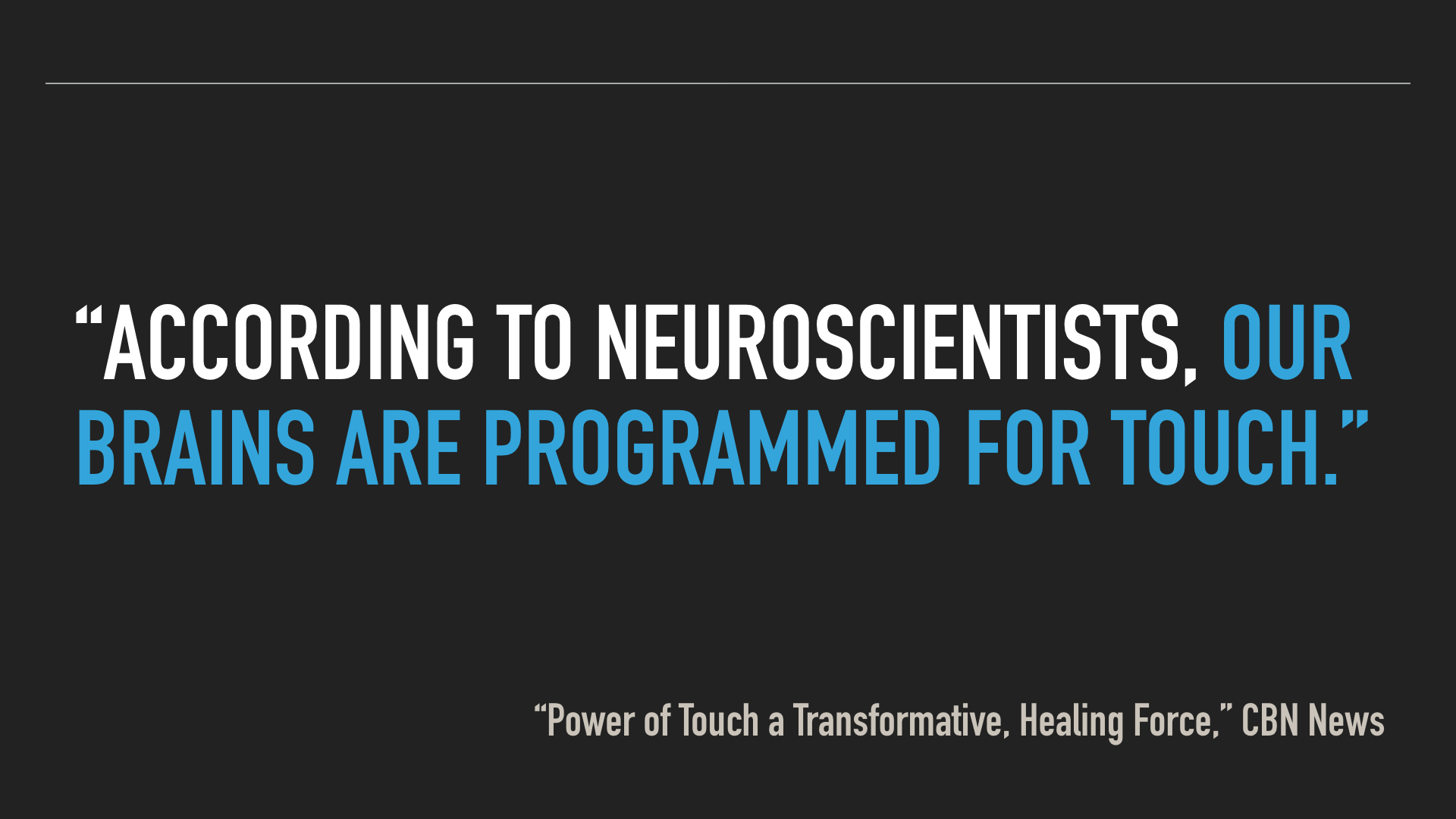 The study cited in this final article actually shows that “touchier teams” (i.e, basketball, football) performed better than less touchier teams. Apparently, something is communicated in the high-fives, the shoulder taps, and the fist bumps that is actually quantifiable.

It sounds strange, sure. It seems like it would be a non-issue, an insignificant factor. Yet, the power of touch effects even what happens in the sports arena. If touch helps there, what can touch do with the things that matter the most? 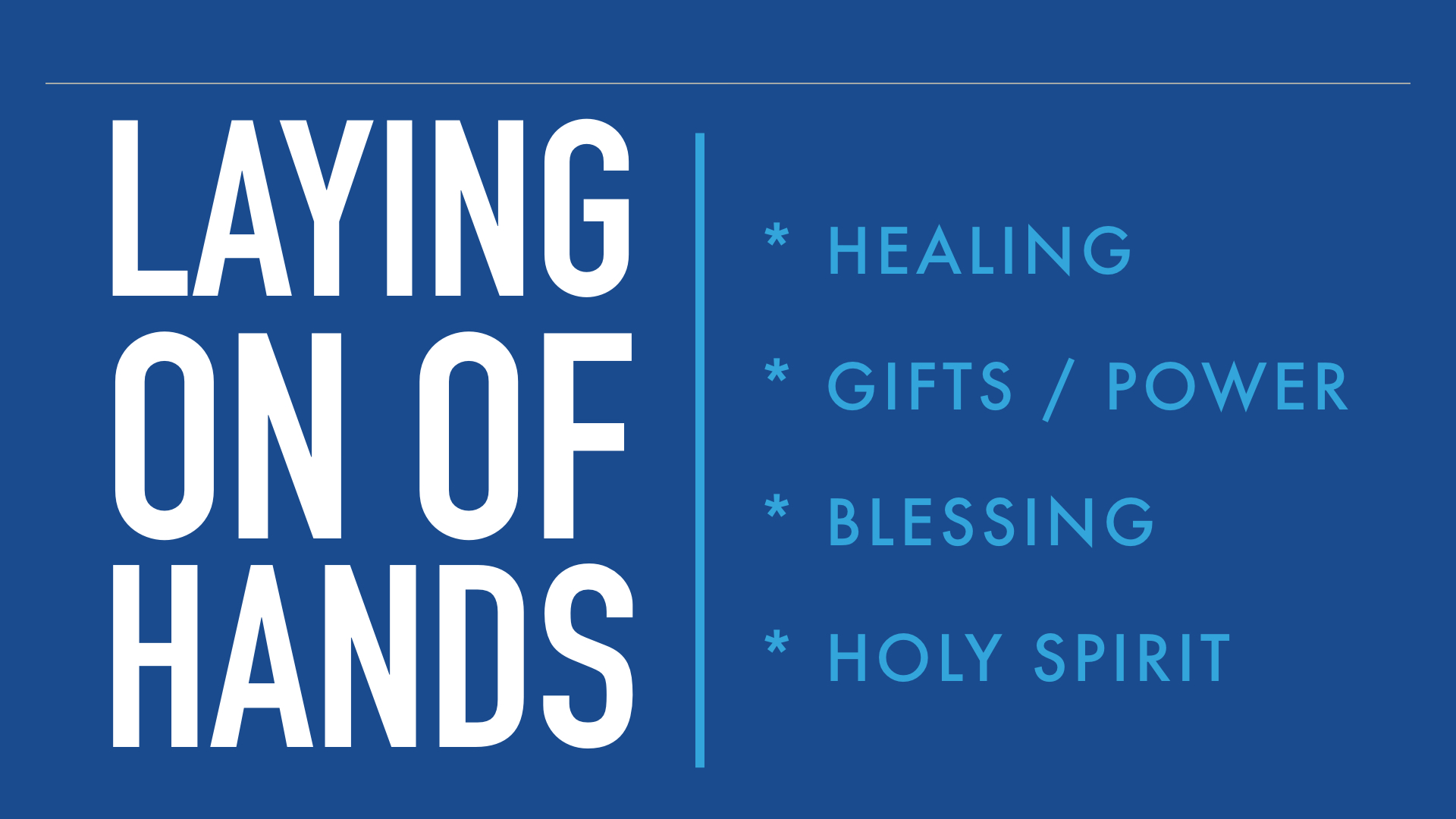 TOUCH IN THE BIBLE

If these concepts are true- and I think they are- it sheds new light on what Jesus sent His disciples with the power to heal AND the power to lay hands on people (Mark 16:15-20).

If you’re new to this “laying hands” on people thing, it simply means this: we pray for them and touch them at the same time, transferring to that person whatever it is that we have. Something is “exchanged” through touch.

The Bible demonstrates that when we do, amazing things happen. In fact, let me show you four things we see happen in the Bible, all centered around relationship and touch. After seeing this, you’ll agree: touch is one of the most powerful forces in the universe. (And I think that's why we see touch happening so many times in Scripture.)

First, we see touch heals. We learn that Jesus can heal people with a word- He just “says it” and it happens. At the same time, we see that He often goes out of His way to intentionally touch people- particularly those who have been isolated (like lepers). 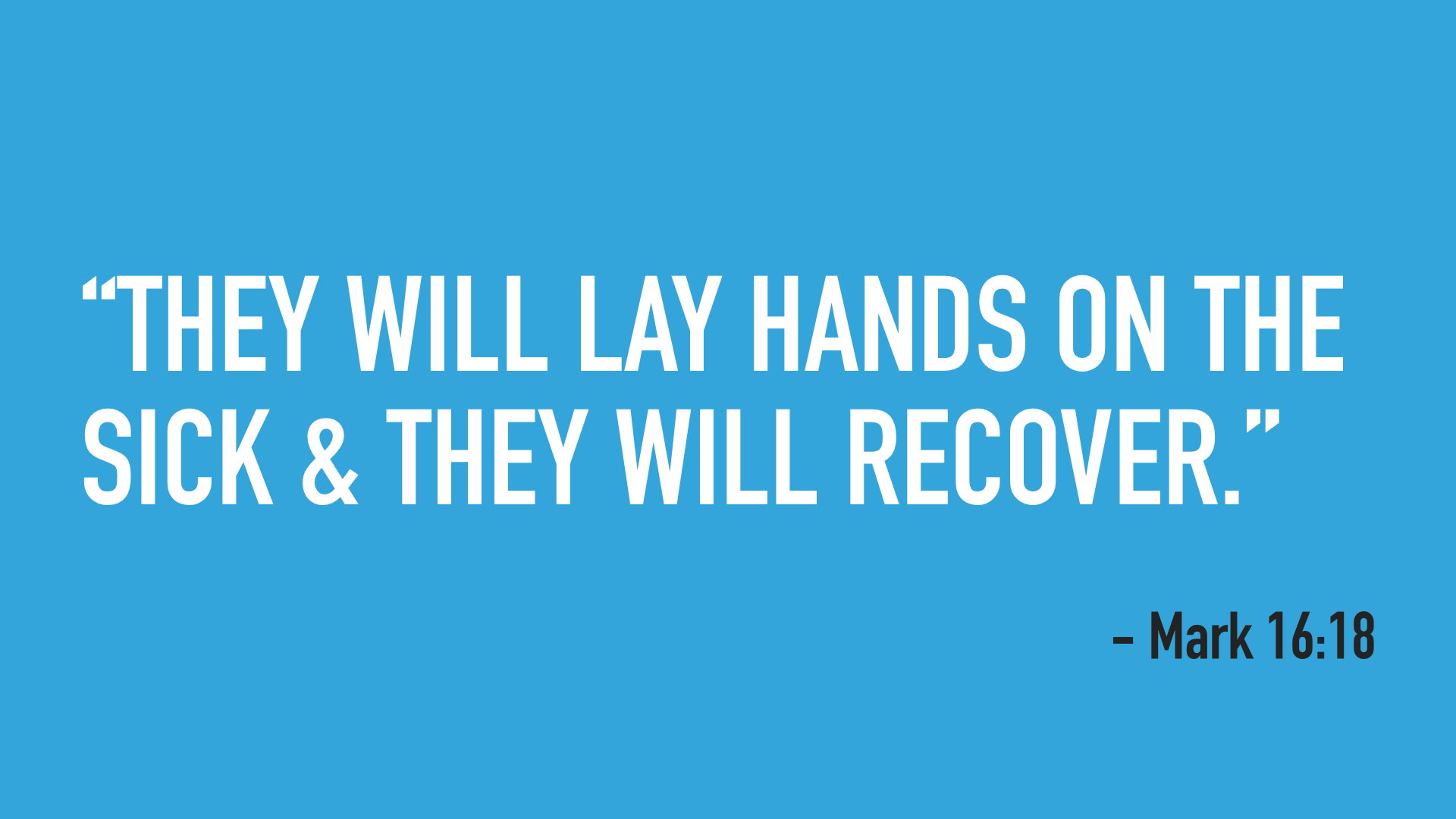 Second, we see the power of touch imparts power to people. Sounds odd, I know. But, the Bible tells us clearly that this is how Timothy received his empowerment to pastor- and it's why Joshua was a stout and strong leader. 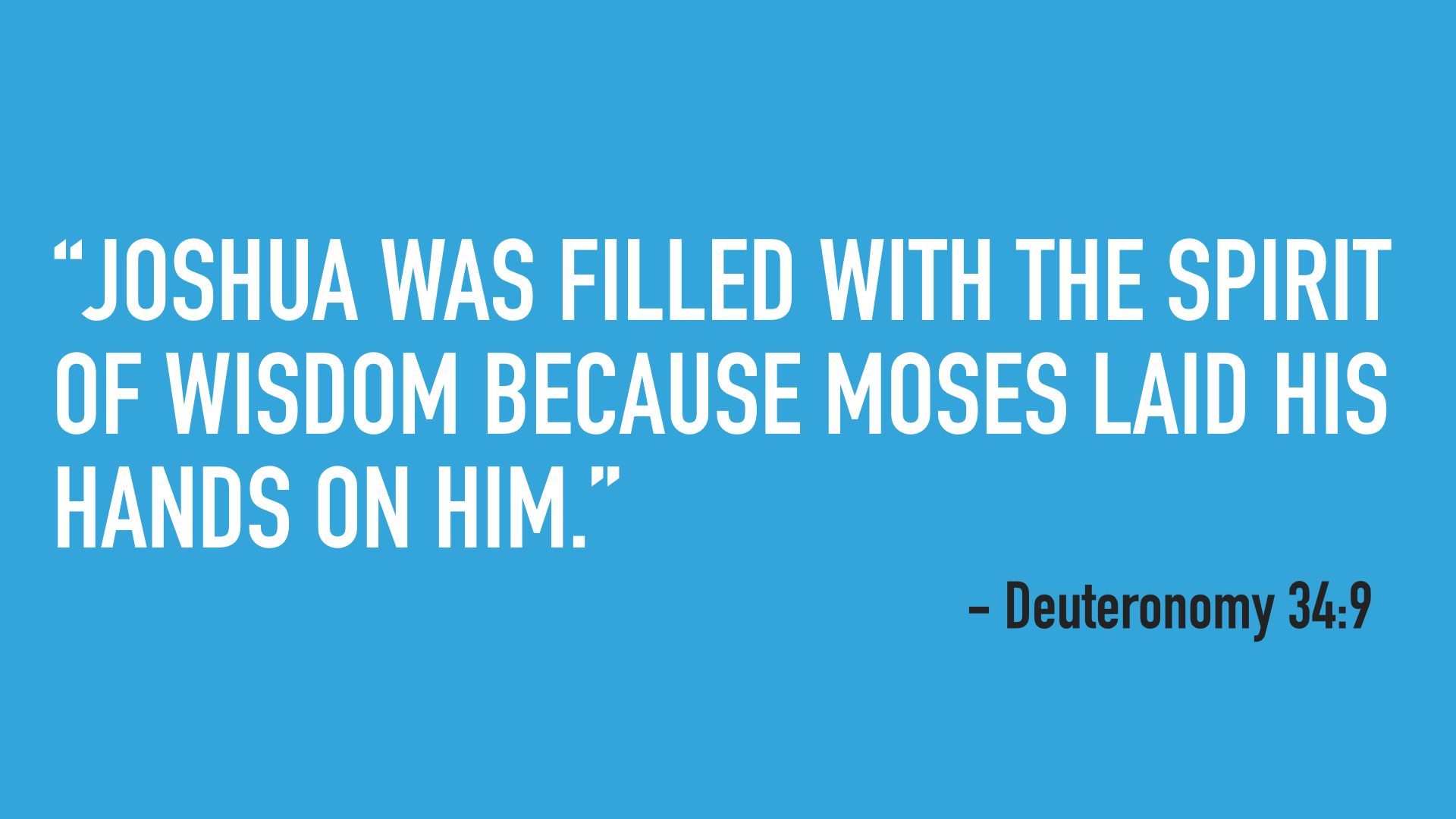 Third, touch brings blessing and sets up destiny. So, we see Jesus touch the kids when He blesses them... literally setting them on course for their lives.

Fourth, finally, touch imparts a unique relationship with the Holy Spirit. Again, I know... it sounds strange, too. But, we actually see it happen. 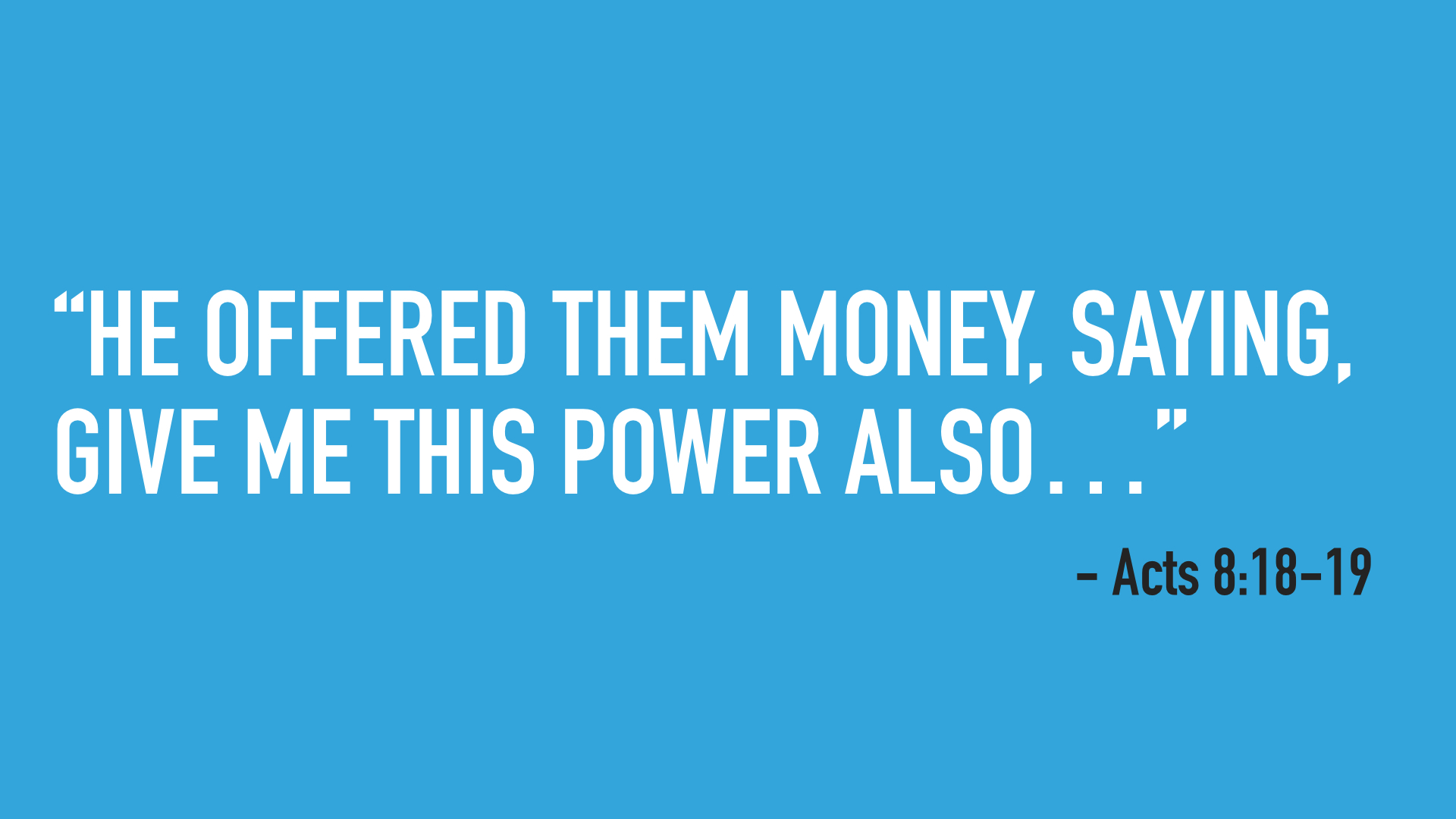 (Read the story above in your Bible ^^^  and you'll see that this one was so obvious that the local magician actually wanted to purchase this power of laying on of hands from the apostles!)

Here’s what I see through all of this: most of what God does, He does through His people. And He uses His people to express Him through them.

Your hands can be used for greatness.

So what should you do?

Touch. Keep your hands on your wife. Your kids. Your friends. Give away life + hope + encouragement + the presence of anything you from the Kingdom. 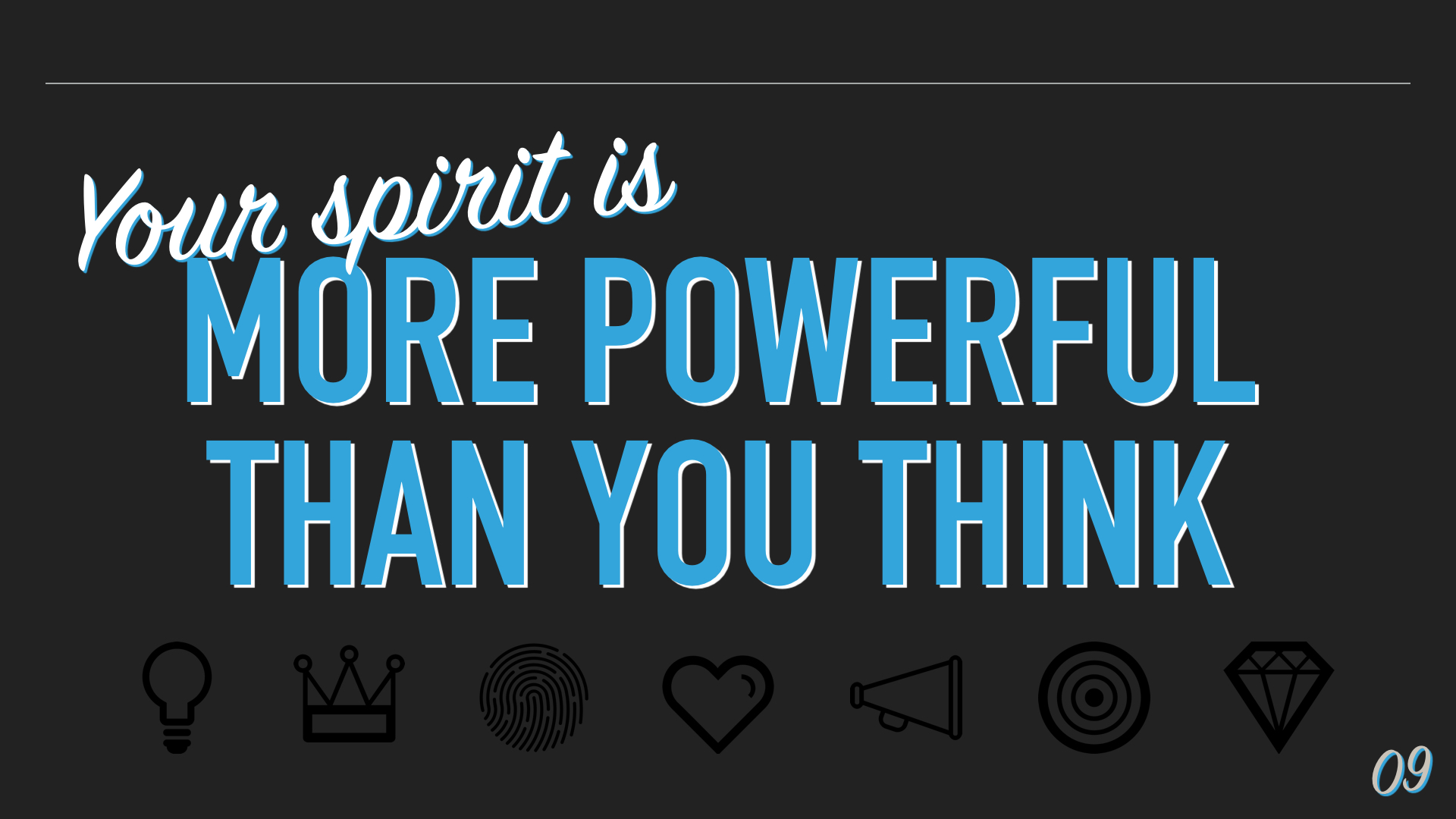