One of my favorite pictures of my wife is one she never knew I took. Until after the fact, of course.

We were at a vendor booth last year, selling some of our books and training materials. We’ve chosen not to separate our faith from our business- or our business from our faith. I understand it can be tricky for some people to walk that line, but it’s served us well.

On one hand, people of faith regularly seek our help. They know we’ll support them, breathe life into them when their tank feels empty (the Lord knows ours has been tanked-out plenty of times and we’ve had amazing people pour into us!) and send them on their way feeling better than when they came.

On the other hand, I’m learning this: people who ARE NOT “of faith” (or have faith, but of a different kind than ours- I've learned that most people are open & actively seeking truth) actually appreciate us “owning” where we’re coming from- as long as we’re gracious in our approach. They expect us to be true to who we are… and, in fact, it would be weird if we weren’t.

Put on the spot

Last year, for instance, I was walking with a friend of mine through the halls of Young Living’s annual convention (we run a home-based biz through them). My friend and I "randomly" bumped into a gal who’s father was extremely ill. She was emotionally exhausted, her mom was at home dangling by a thread… she and her mother both needed encouragement. Desperately.

My friend- an incredible guy who has taught me much about generosity, kindness, living in the moment and being present to others- looked at her and said, “Andy will pray for him! Right here, he’ll do it.”

Here’s what struck me about it the most: my friends “prays” differently than I do. He and his wife meditate. He grew up rigidly Catholic and has become graciously free. By his own admission, he and I see some things differently- yet we've grown in respect and honor for each other.

When it came time for share with someone else- and impart what I have- he EXPECTED me to do what I do, not do what he does. So, we grabbed the gals’ mobile phone, said “hello” on video, and I prayed… on video… so they could watch it over & over & over again…

(By the way, Cristy and I attended a workshop his wife was leading a few hours later. She taught us about mental clarity, positive thoughts, and “seeing” what you want to see. I EXPECTED that from her and was glad to receive it. It would have been as odd for her to bait and switch and start talking about laying hands on people and praying for them!) 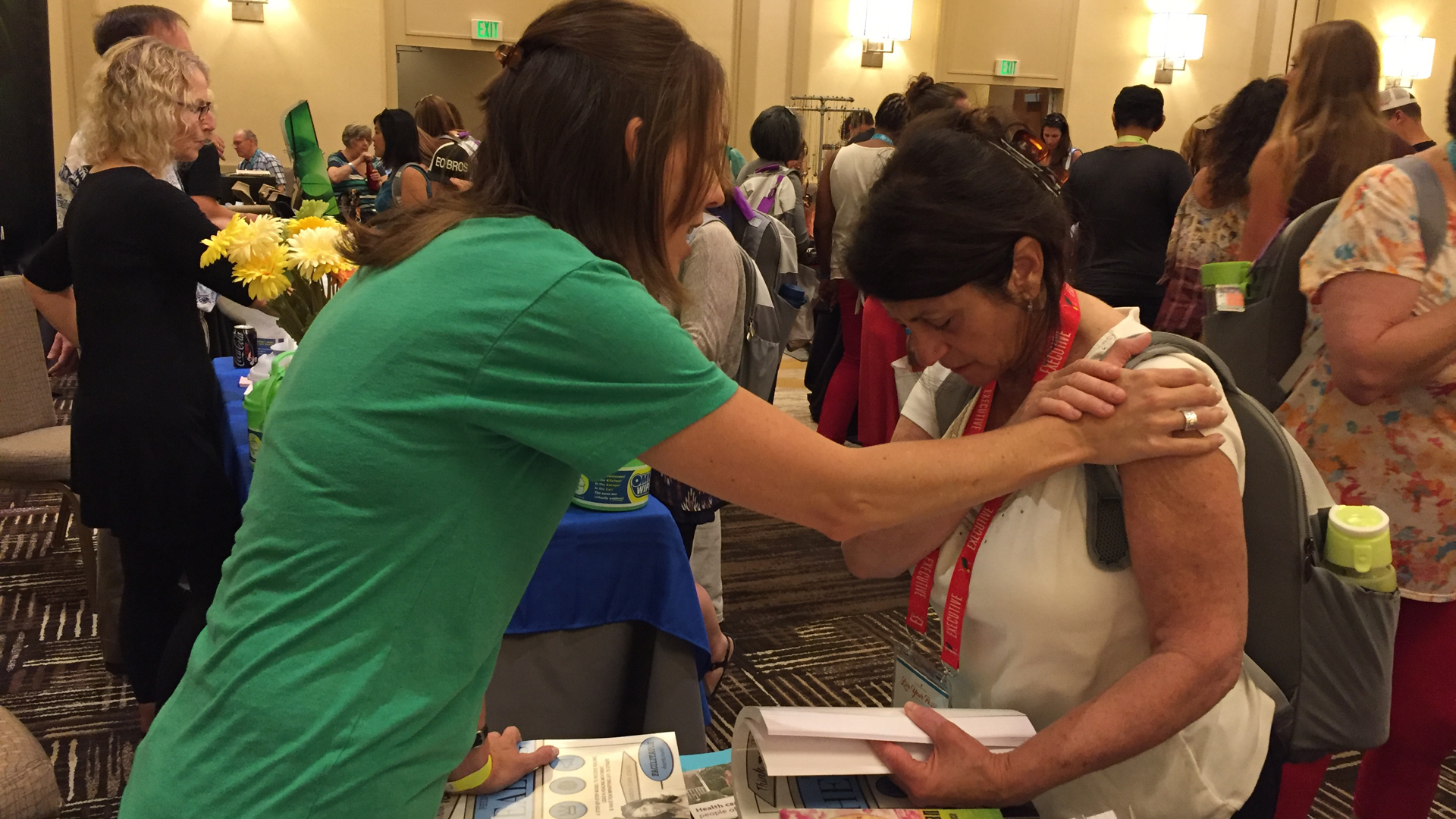 One of my favorite pics

Leads me back to one of my favorite pics. In it, Cristy leans across the books and prays for a woman who came to our table- not to purchase books or videos- for prayer. That prayer happened as "randomly" as the other prayer, just by being present in the moment.

And I remember watching Cristy reach over to her, pulling her close, across the table...

She spoke words of life, encouragement, and freedom… and then began praying.

It’s marked on my mind not just because of what she did but also because we were walking through an incredibly tough season at the time. And that season would only get tougher within the next 30 days or so. Yet there she was giving…

Giving… and someone knew, get this, that they could come take. Because the giving would happen freely. Even amidst struggle and pain.

Turns out, another lady came for prayer at the same time. Cristy was occupied, so I asked her if I could help her. She explained that her husband was ill. That he’d been struggling for a long, long time.

They, too, sensed hope was gone. They were emotionally and spiritually famished. Like the young gal at the convention. Like woman in the pic above. All three of them at the SAME event, by the way...

She asked, “Will you pray for my husband?"

I asked her for her cell phone. She was somewhat flustered at first, then understood what I was about to do...

I told her I would pray whatever the Lord brought to my heart, and that I would record it for her. That way she wouldn’t just have to go home and say, “Somebody prayed…” and then have to try and remember what was said.

Rather, she would be able to say, “I have this prayer for you.” Then, they could watch it over and over, allowing faith and life to rise each and every time they replayed it.

By the way, I learned this trick from a friend of mine, Matt. He’s the missions pastor at Word Alive (where I taught the Healing Workshop in Oxford last Fall). Often, when people visit the church, he’ll shoot a little message for them, then send it their way.

So, the credit for praying over the phone for the gal’s dad in the first story above…

… and for praying for this dear lady’s husband… whom I prayed for because Cristy was already praying for someone else...

... I learned the cell phone thing from Matt.

Does it work? Do "long distance" miracles happen?

Anyway, a few weeks after the prayer, I received an email back from the woman who met me at the table. Turns out… well… I’ll let you see it straight from her >>>>

Here's a screen shot of the email... 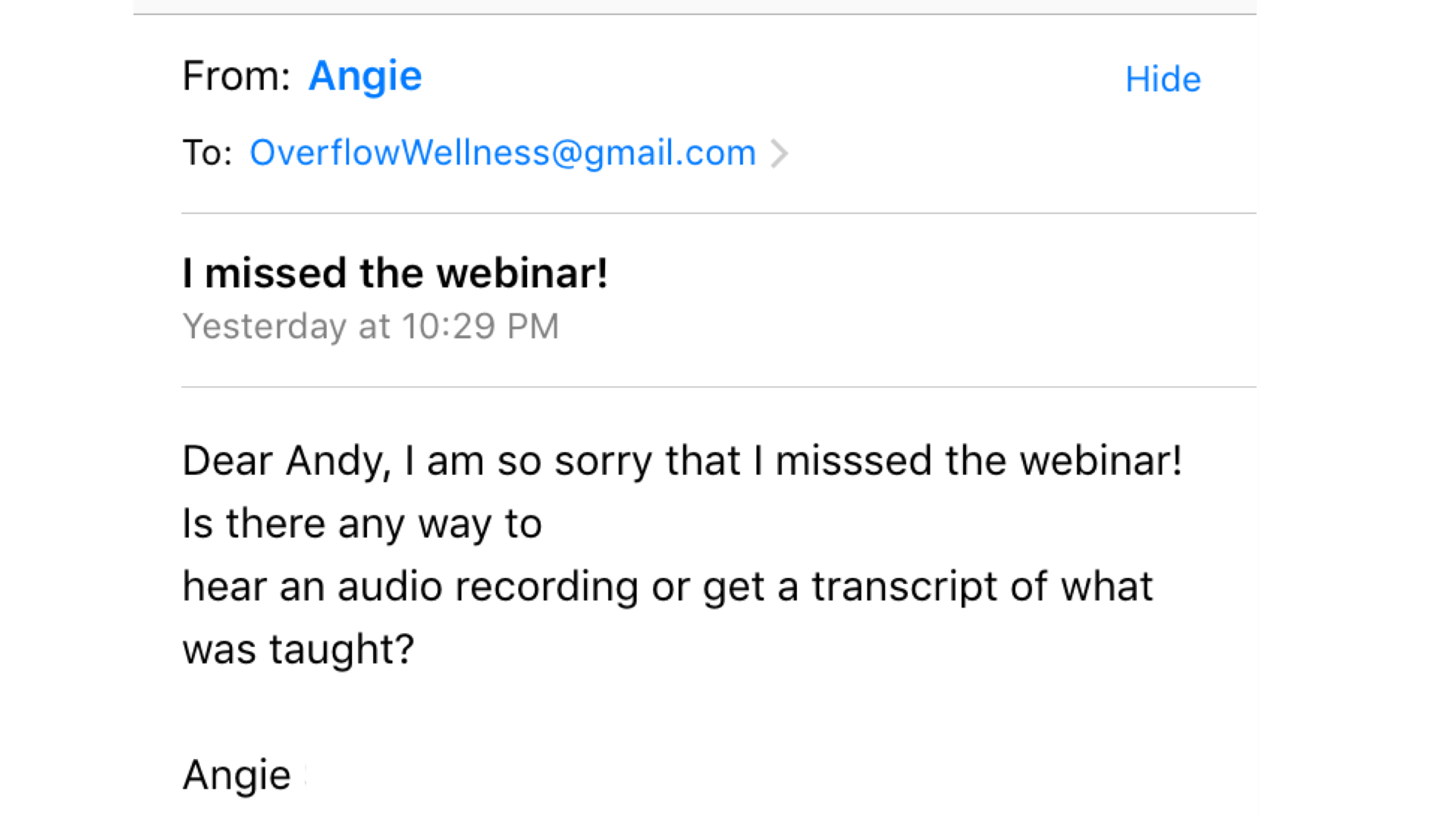 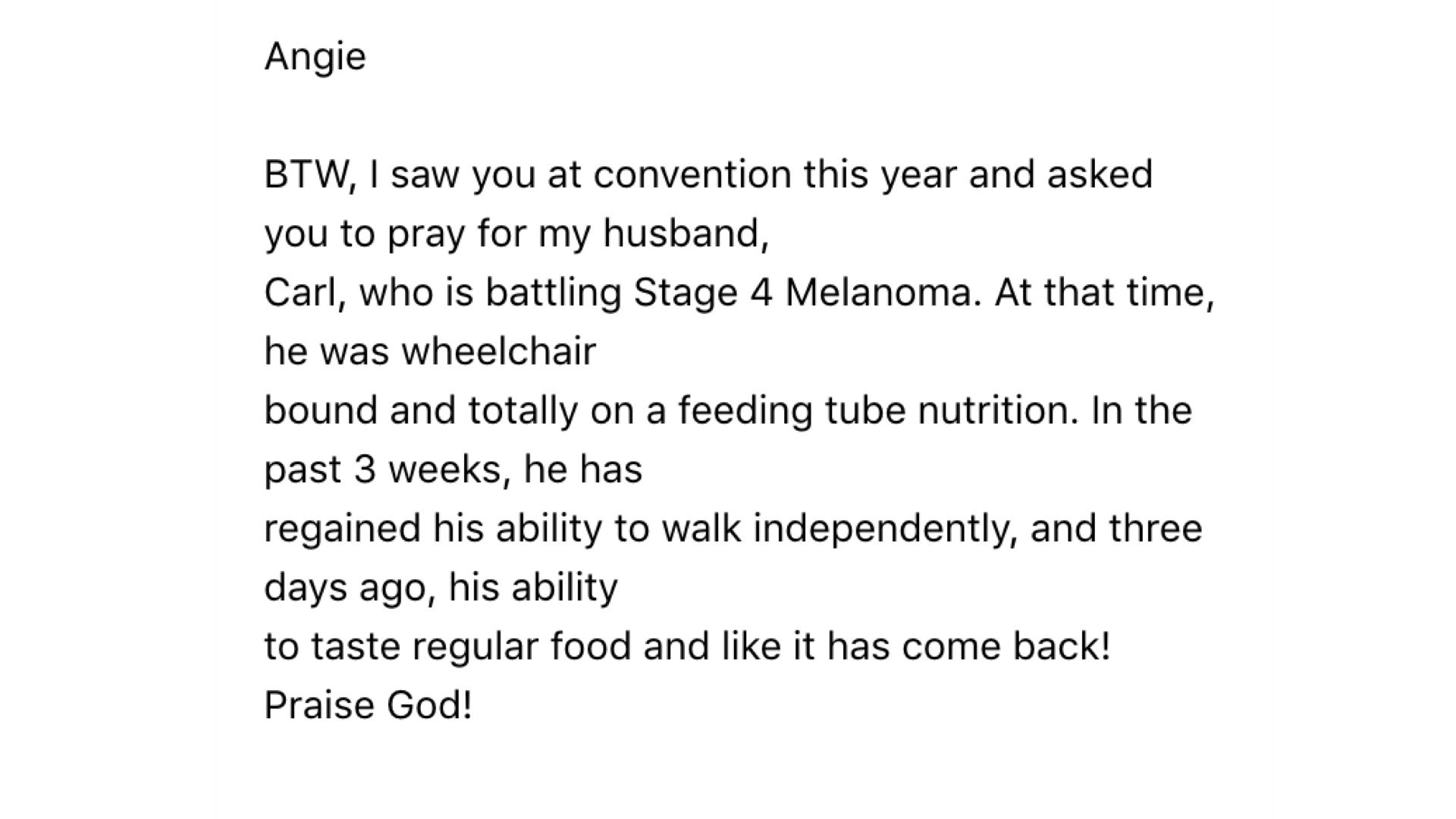 You might also like the free healing eBook + bonus videos teaching you how healing happens today- Go to https://www.overflowfaith.com/p/healing-free-ebook-offer 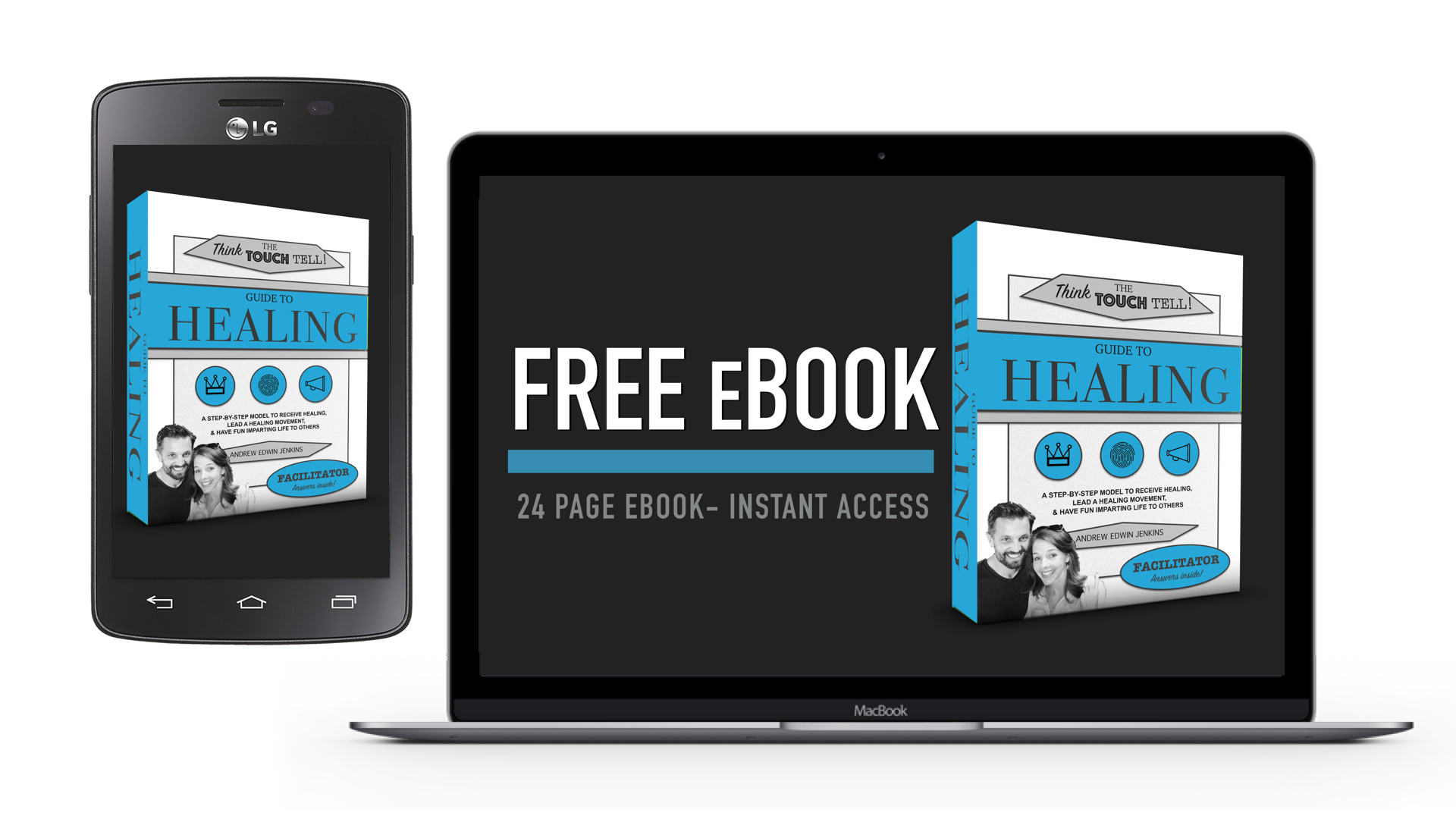