We built a zip line in our backyard from some scrap wood we had after sodding the yard and re-arranging the stairs on our deck. For about a year, the kids never had an issues with it.

No falling. No bleeding. No screaming...

Those were the basic rules governing my agreement to our boys’ requests for the contraption in the first place. As long as no one falls off, gets hurt, or fights about the whole thing… we’re good.

That plan worked flawlessly for about 720 days or so- almost two years. Then, one afternoon, Mini (that’s what we call Miriam, our youngest girl) hit a snag in the line when she was about 10 feet in the air. She fell, landing on our wrist.

I heard the little "thud" in the backyard, as I was sitting on the deck just 20-30 feet away.

To her credit, she followed two of the three rules. No bleeding. No screaming… 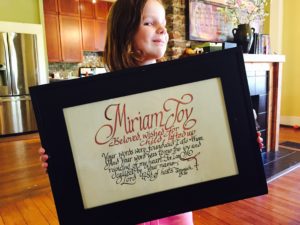 At first, it seemed like everything was fine. She was shaken up a bit, but was easily consoled. We took her inside, let her take a leisurely bath, and then gave her something to eat. It had already been a long day, and we figured she probably just needed a bit of TLC and some rest.

Soon her wrist began swelling, though.  After calming down from the shock of it all, she decided she was in pain.

Cristy gave her an OTC pain reliever, and I drove her to the ER to get a quick X-ray and have things evaluated. It was an easy, quick decision.

Well, it seems obvious, doesn’t it? It seems trivial to even spell it out…

We knew that the pain she felt and the swelling we saw were alerting us to a deeper issue, something we couldn’t see- a possible broken bone. In other words, the pain and the swelling were just symptoms, signal flares, to “shout” at us and get our attention. The symptom of pain was telling us that something might be wrong with one of her body's systems. In this case, we thought it might be an issue with the skeletal system.

Cristy gave her the OTC to some quick relief; I drove her to the ER to check on the underlying issue.

We would have never dreamed of simply giving Mini an Advil, Tylenol, or other pill every few hours of every day for the rest of her life, all while ignoring the deeper issue. That is, we never would have thought about treating the symptom and ignoring the body system.

You wouldn’t have, either.

However… get this… people actually do this exact same thing every single day! In fact, we've create a multi-billion dollar industry based on treating symptoms and ignoring systems. 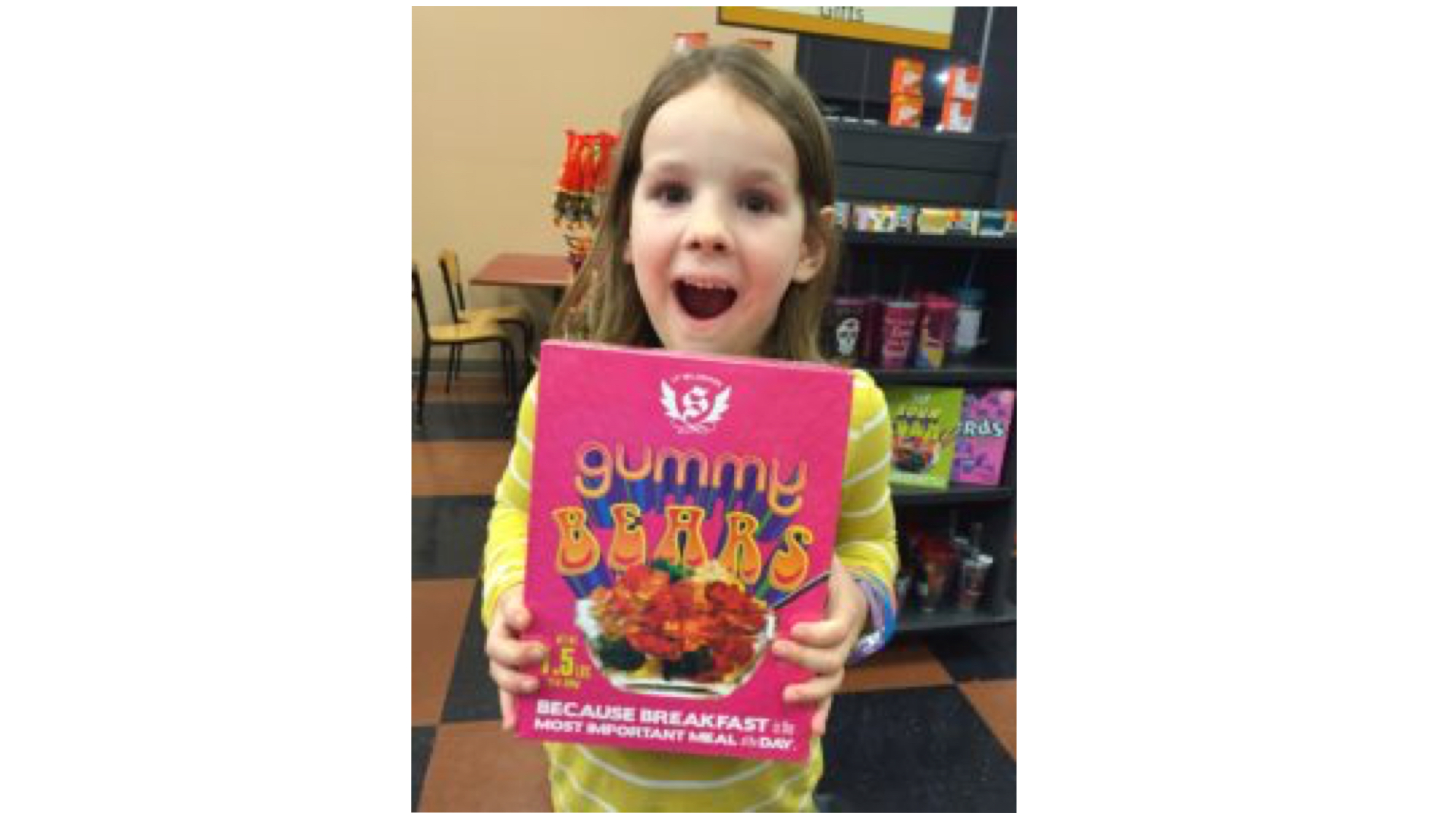 A pill a day, every day?

Now, don’t get me wrong. I’m super-glad we’ve got access to the best medicines and the best medical care. It’s an amazing gift.  However, drugs were originally designed to give temporary relief (like the pain reliever we gave Mini), so that the deeper issues could be addressed (the broken bone).

Why? Because pharmaceuticals target symptoms- not body systems.

Pharmaceuticals lie to your body. They tell it your OK, when, really, you’re not. Sometimes, that's OK. (Really, it is... I'll get back to that in a moment.)

Notice the root of the word- from your Bible. See if this helps put it in perspective- The word pharmakon (in Greek) is the word used to denote sorcery, witchcraft, and poison. When you take a drug in any form, your putting an unnatural substance in your body.

(And have you noticed how many well-known drugs are known to cause HUGE problems for the people who take them!? Yet, we still take them...  Hmmmm...) 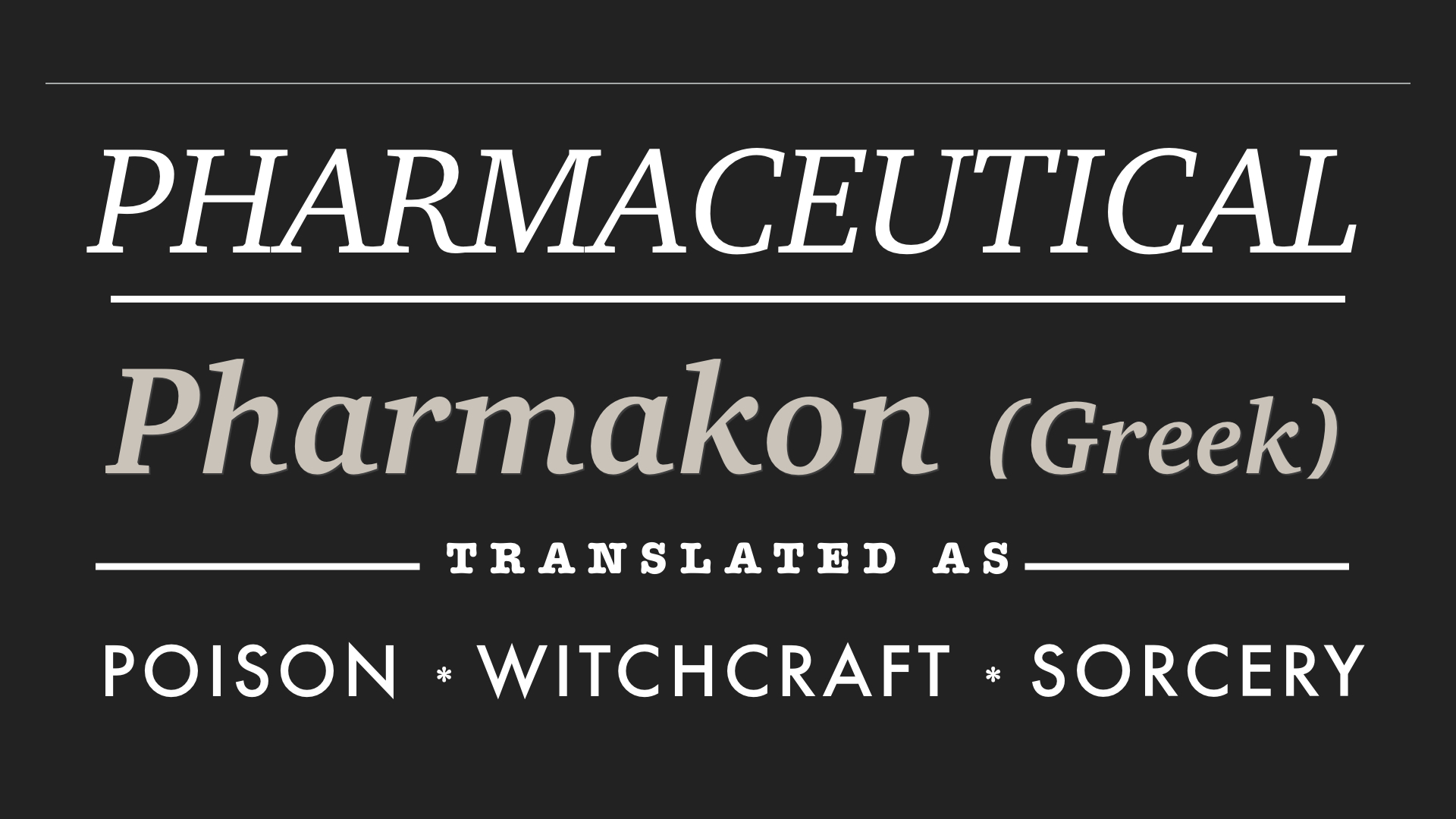 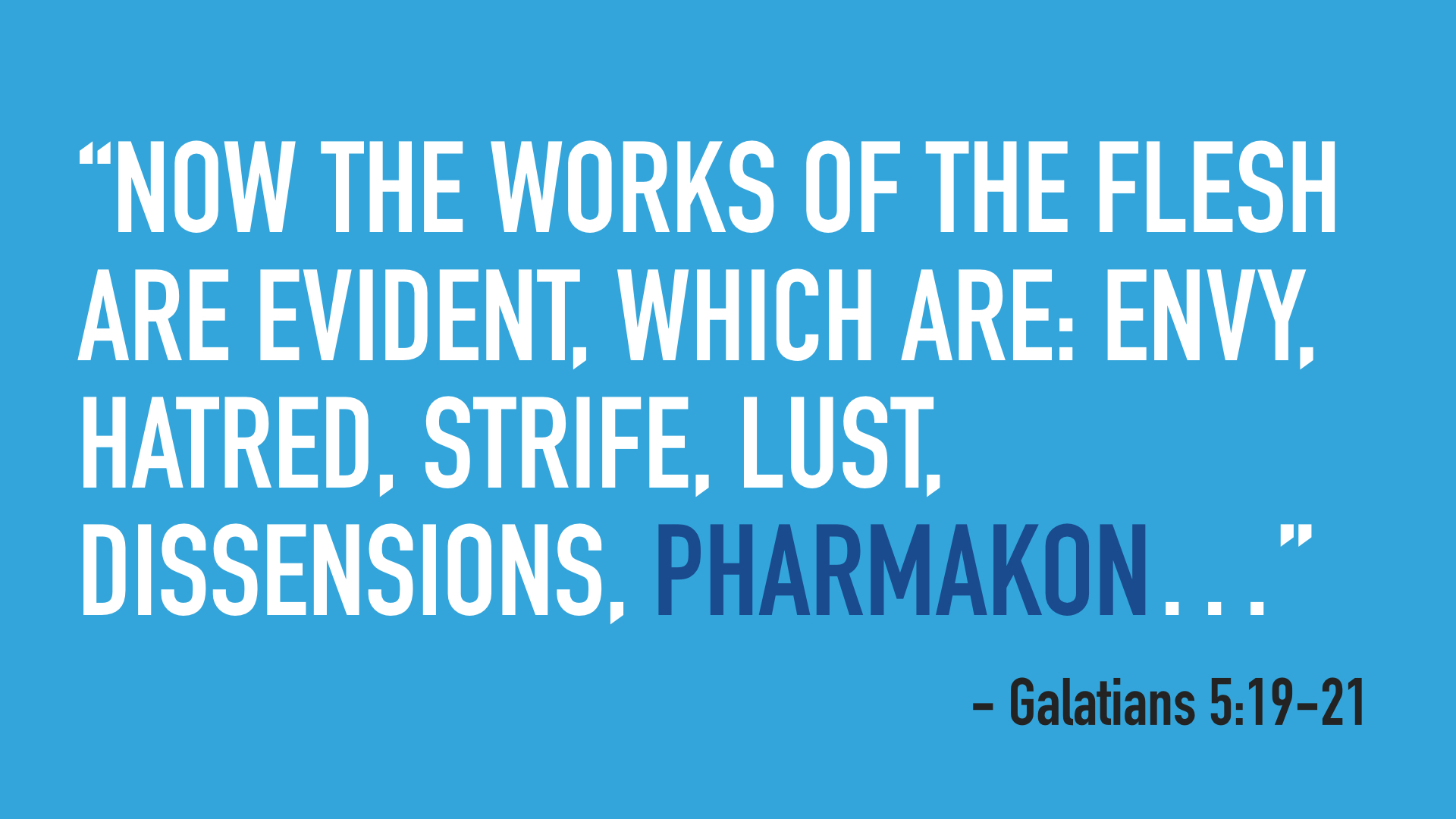 Now, I'm not arguing AGAINST the use of drugs and OTC meds. Nor am I saying you shouldn't go to the doctor. That's why I opened this post with the story about Miriam and her arm. I'm grateful we have access to the technology that we have...

And, I've taught on this website that there are two kinds of healing- the kind God does (iaomai, miracle healing) and the kind we do (therapeuo, walking in health by making health decisions). Iv'e discussed how I believe that BOTH of these kinds of healing work together.

Let's be honest. Sometimes, a big part of therapeuo IS using meds. However, notice that therapeuo always leads to health. It doesn't "maintain" or "band-aid" a position of un-wellness.  If a medication has become a permanent solution for you, you may have chosen  un-health OVER health.

Notice the graphic from the workshop- 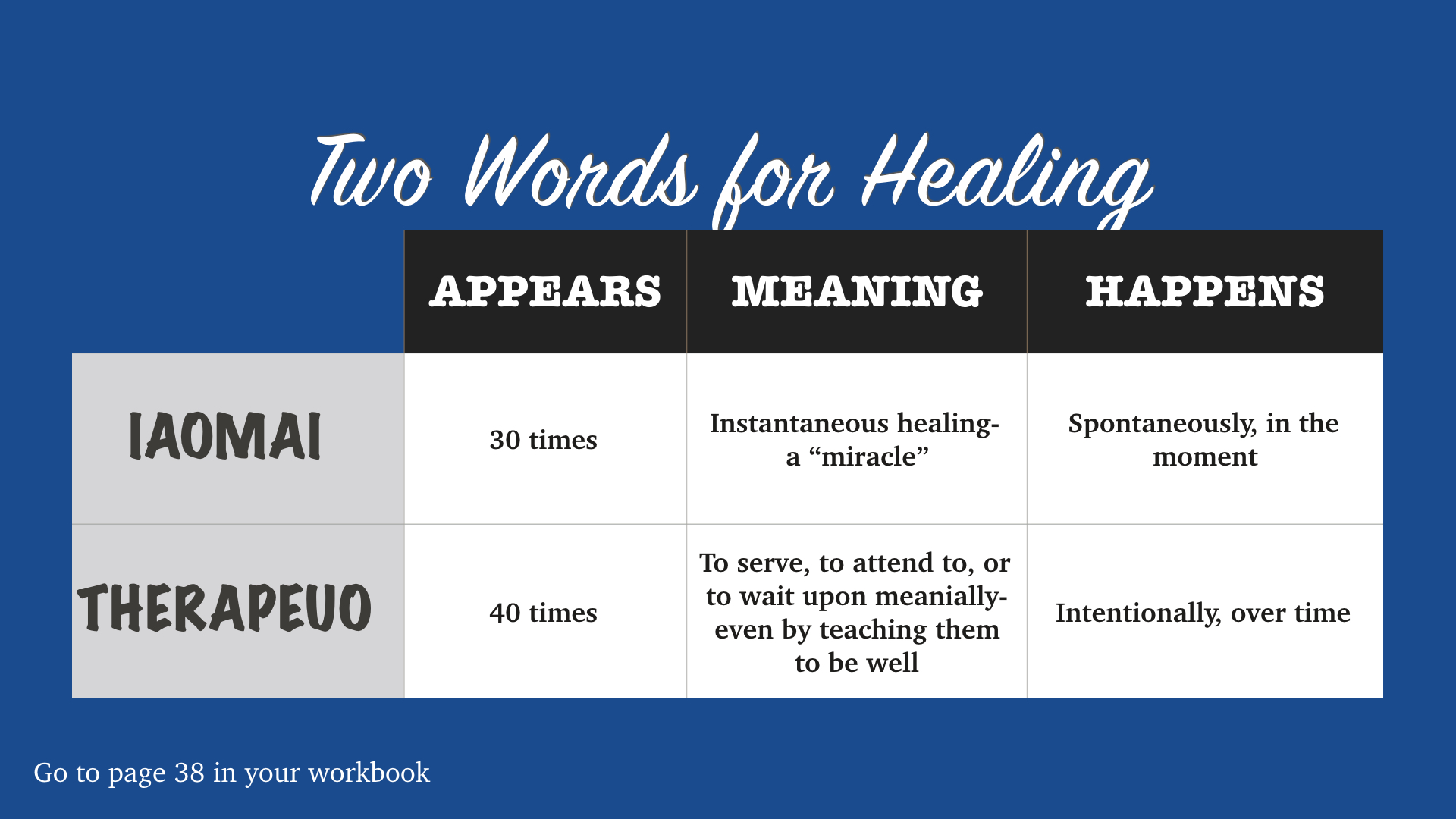 The gift of pain

Lying to your body isn’t always a bad thing, is it?

I know. We don’t want to lie to people, but- as in Mini’s case- a little “white lie” in the body may actually help. In her case, the OTC med lied to her body and told her she wasn’t hurt. By removing pain from the circumstance, we were able to focus more readily on her wrist.

You and I both understand that the pain was actually a gift, something hardwired in her body system by the Creator, something God put there to let us know when something is “off.”

You see, pain can be a gift that helps us know to take a look under the hood and see what’s happening. In other words, pain is to your body what the lights on the dashboard are to your car.

Ok, a little humor there. But you’ve got the point. We don’t ignore the signals…

Unless they're signals in our body, that is. Then, in the form of drugs, meds, and scripts, we often “tape over” the check engine lights :-)

What if your car could over-ride you if you ignored the signals?

What would happen if your car could get your attention in ANOTHER way if you ignored it’s communication? What if, for instance, the car could just blast the radio a few decibels too loudly if you refused to change the oil? What if the windshield wipers just started swishing back and forth until you changed the transmission fluid? What if the car REFUSED to shift out of neutral until fastened your seat belt…?

Turns out, YOUR BODY actually does these things. And it does them quite well.

You know the drill. You take a drug to take care of one issue but the biasted “side effect” of the drug kicks in- you know, the fine print on the label, the quick recording they rush through at the end of the commercials. You find that you’ve gotten rid of one issue, only to create a handful of others…

This is your body creating ANOTHER SYMPTOM, another "check engine light" to tell you to stop and examine your physical health.

I think that many of the "side effects" of drugs aren't side effects at all.  What if they’re simply your body doing what the car WISHES it could do, communicating with you in some other way when you ignore it’s signals? You see, if the pharmaceutical lies to your mind and tells you that you’re fine, well… what if your body is actually SMARTER than the drug?

What if your body, which is FIGHTING to be well, actually OUT-WITS the drug to let you know, "Hey, take another look! That thing you fixed wasn't the thing needing to be fixed. That was just a symptom of a bigger body system issue!"

How about this example…

You see what happened?

We’re caught in a loop.

By the way, there are TWO main types of drugs, pharmaceuticals and antibiotics.

I just told you how pharmaceuticals work- they target symptoms (instead of body systems) and lie to your body. They calm the symptom (which is, in effect, the "check engine light") and eliminate it (i.e., tape over it). You should not take a pharmaceutical unless you intend on addressing the deeper issue, that is, the body system.

Antibiotics work "against biotics," that is, against living organisms in your body. We call these bacteria. In the same way an anti-theft device guards against intruders and anti-aircraft weapons defend against outside threats to a nation, antibiotics kill biotics.

Herein lies the problem. Antibiotics make no distinction as to whether the living organism inside your body is a good organism or a bad one. Turns out, though, your body has both.

What would happen if your burglar device alerted the police every time ANY visitor came to your home? That arrangement wouldn't work too long, would it? You want to welcome good visitors and repel bad visitors.

Antibiotics make no such distinction between good bacteria and bad bacteria. Whereas we don't want bad bacteria living in our bodies, our gut is literally lined with thousands and thousands of helpful micro-organisms which aid in everything from digestion to mental clarity to how energetic or lethargic you feel. Whereas you can manage this with prebiotics, probiotics, and your diet, antibiotics completely kill everything good and bad.

(Like chemotherapy... chemo doesn't distinguish between "good" cells and "bad" cancer cells. Chemo attacks all cells, effectively halting the growth of most cancers because it inhibits the reproduction of most good and bad cells.)

Whereas you shouldn't take a pharmaceutical unless you're ready to chase down the real issue and address the body system needing health support, you shouldn't take an antibiotic unless you're ready to wipe the entire system clean. Sometimes that's what's needed; most of the time we reach for antibiotics, though, because taking a drug is far easier than managing our health over the long-haul. 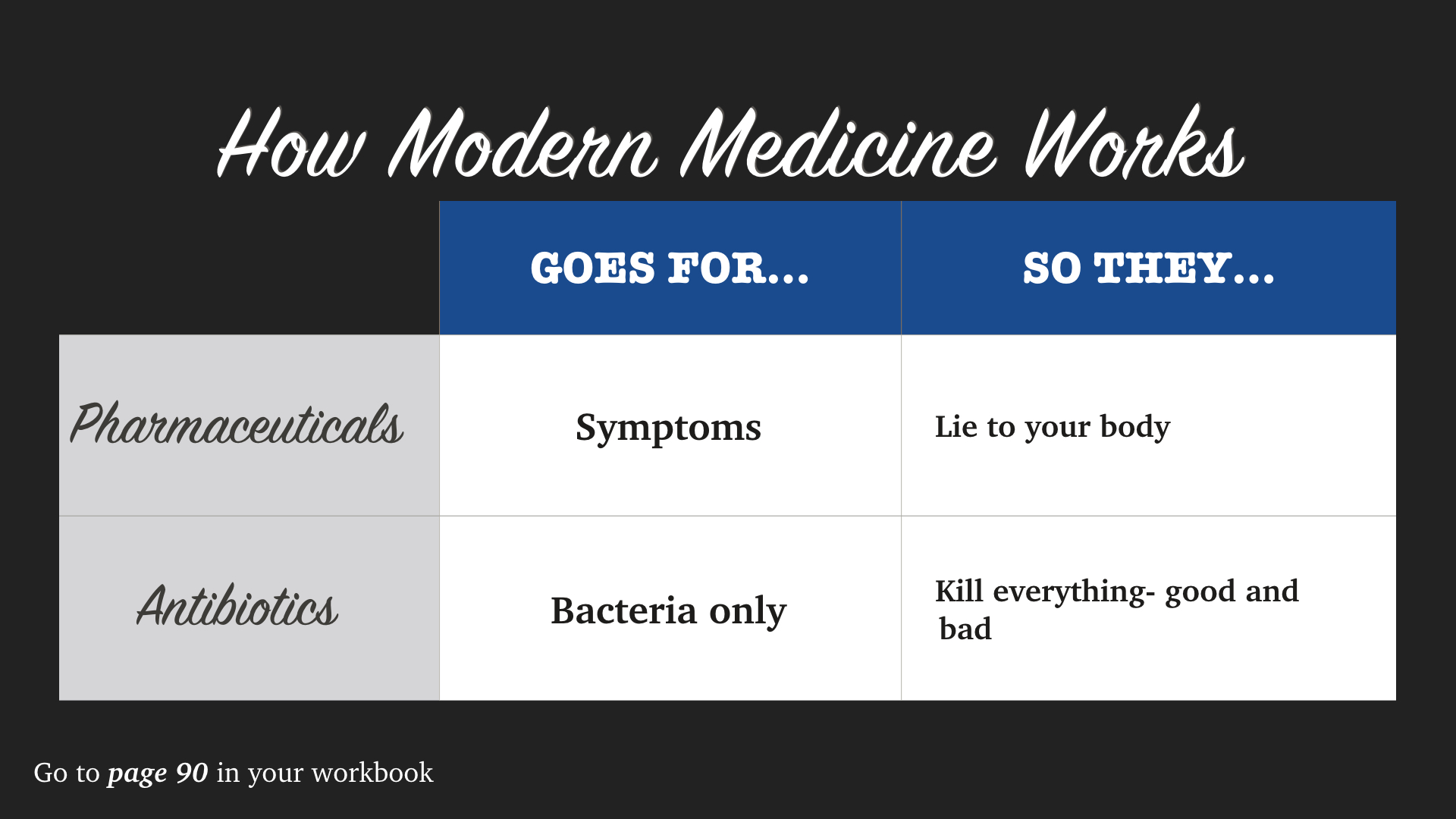 What's the point? Embrace the technology we have, but do so wisely.

And don't manage what SHOULD BE temporary health problems by giving them PERMANENT SOLUTIONS that we're merely designed to be temporary band-aids to help you address the deeper issue.

Don't shadow-box with the side-effects, never really dealing with the deeper issues, those all-important underlying CAUSES of the entire ordeal.

We’ve created a situation in our culture where we’ve seemed to forget that the intent of the drugs was to give temporary relief while we seek permanent healing, right?

The video above  comes from The Healing Workshop. Go to www.TheHealingWorkshop.info for more.