Video: Jesus has been far more successful than we think

The Bible tells us we're redeemed by the blood of the Lamb (i.e., 1 Peter 1:18-19). If this is true, it means that Jesus offers a facet of redemption (read: freedom) at each place He bled.. 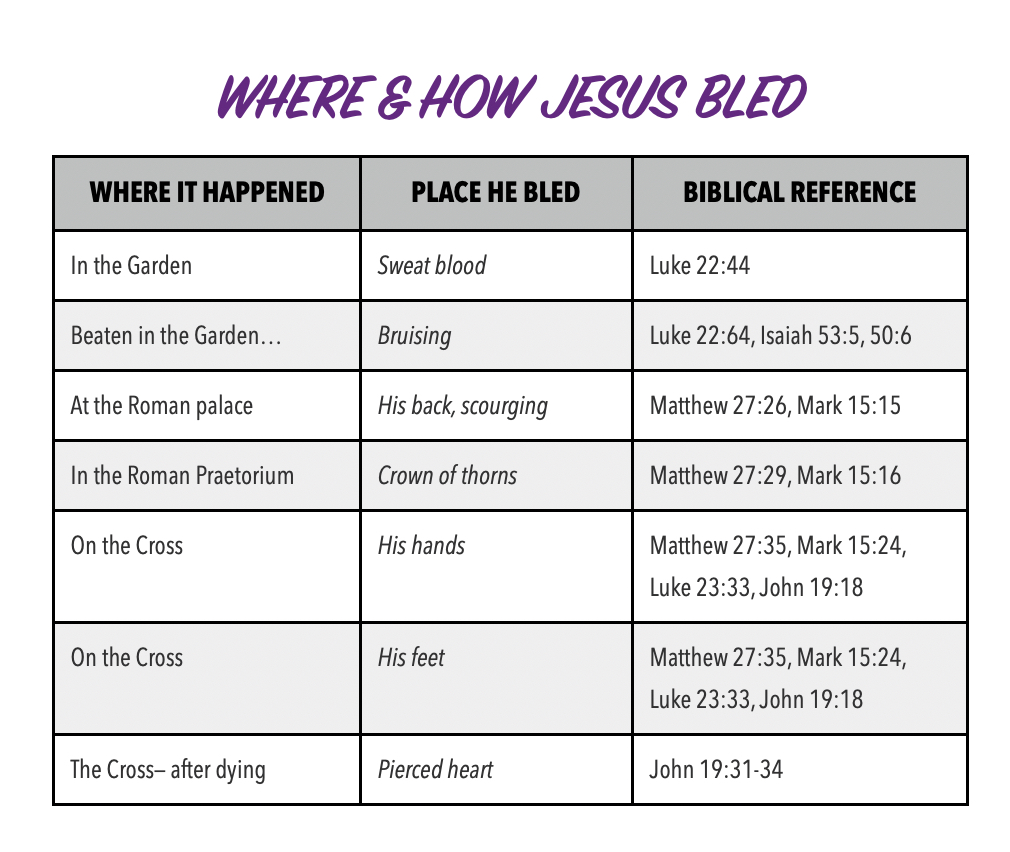 For the purposes of mental and emotional healing, which is our topic here, let’s look at two of the specific places Jesus bled.

First, Jesus was bruised. Isaiah declared, “He was wounded for our transgressions; He was bruised for our iniquities” (53:5, emphasis added).

Most translators agree that wounds and bruises are two different facets of healing:

That is, Jesus heals our bodies (physical healing) and he heals… bruises?

A bruise develops when blood vessels burst beneath the skin, creating internal bleeding.

Though visible from the outside, a bruise is an inside injury. 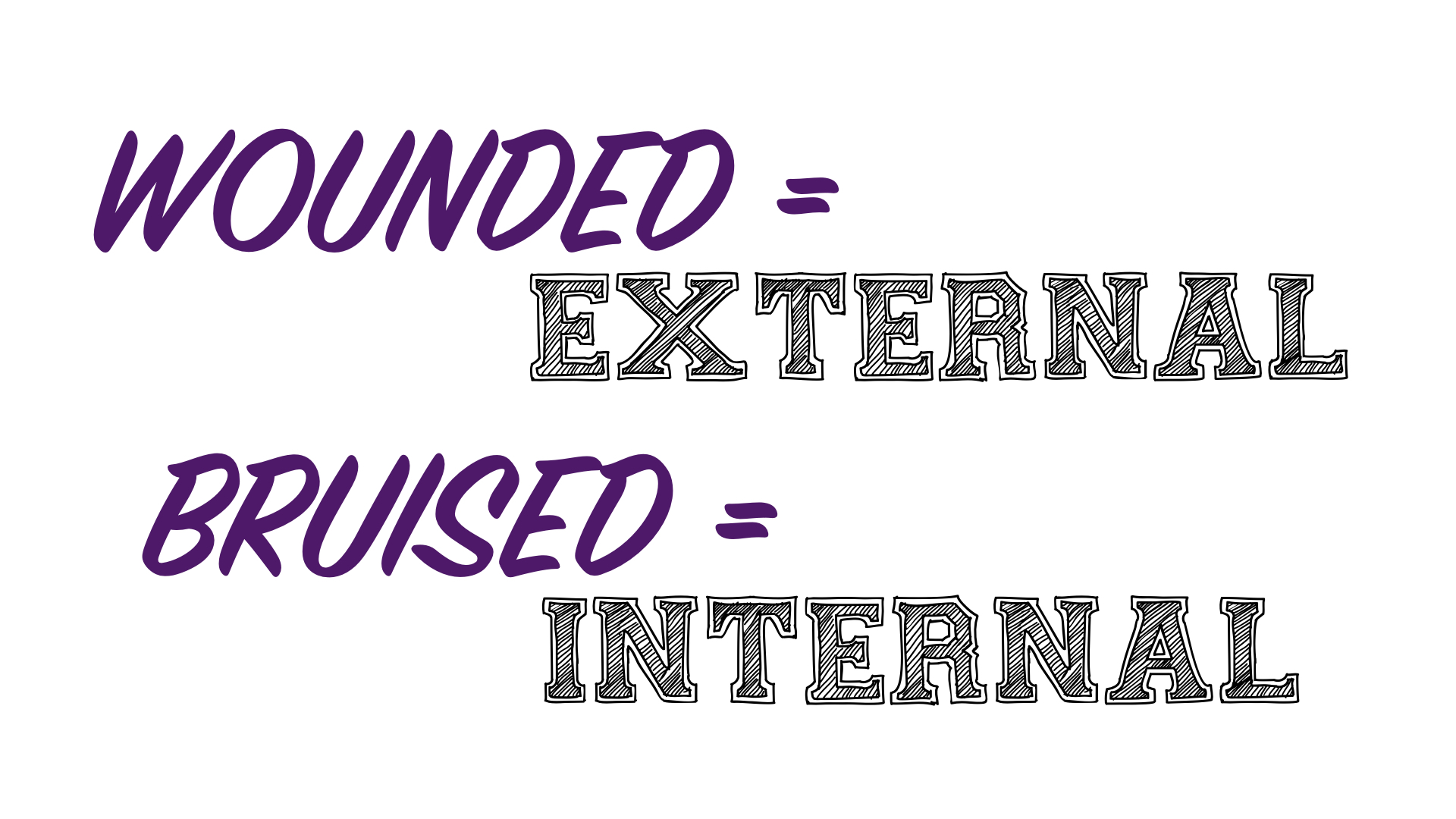 What does it mean that Jesus bled inside Himself?

Perhaps Jesus bled to heal the junk inside of us. That is, He didn’t only die to forgive our sins and take our guilt, He also died to heal the mental and emotional clutter that accompanies sin— the sins we commit and the sins committed against us.

Sin isn’t just an action that’s “done” and then gone. Sin often leads a wound, a mark, and an uncleanness that attaches itself to the soul. It’s internal.

Physical bruises can become so much a part of our outside appearance that you may not have even made the correlation that bruises are actually blood vessels which have burst beneath the skin. Our “internal” wounds and emotional hurts are the same. If we don’t deal with them in a healthy way, even though we try desperately to hide them, our emotional wounds become visible to everyone around us in an unhealthy way.

In fact, these internal wounds can become the filter whereby we begin interpreting the world around us. You see it in my story—

We become so accustomed to our bruises that we hardly notice them. Though obvious to those around us, we’re often blind to some of the very hurts which cause many of our ongoing struggles. They become our perceptions, our default mode of interpreting the world around us (remember, as we discussed in chapter 8, perception isn’t always reality— sometimes, we get it wrong).

Furthermore, you’ve been hurt enough— or seen people who’ve hurt enough— to see that if you don’t resolve the emotional wound, the bruise becomes larger and larger, causing more and more issues…

Let’s get personal about this. If you identify yourself based on the past, the wound has marked you. The bruise, though “beneath the surface,” is probably visible to everyone around you. It’s become part of your identity, and may even be your most predominant feature— just like my emotional dysfunction had become.

Walking with a bruise is very different than living with a scar. A bruise remains tender. A scar, by its very nature, verifies that healing has happened or is, at least, significantly underway.

When Jesus bled beneath His skin, He redeemed / freed everything inside us.

Still working for you-- even after He died

Second, there’s another place Jesus bled I want to highlight to you, though, another places that has to deal with emotional healing…

Grasp this: Jesus’ work on the Cross is so thorough that even after Jesus died He continued bleeding. This is important to note, because “the wages of sin is death” (Romans 3:23). All that was really required for our forgiveness was that a sacrifice be made for sins.

Then, He committed His Spirit to the Father and died (Luke 23:46). At this point, sin had been atoned for.
Even after all things are complete, though, Jesus did more. Additional redemption was

John is the only writer to pen the following detail (see John 19:31-34). He writes that after Jesus died “one of the soldiers pierced His side with a spear, and immediately blood and water came out” (19:34).

What was He doing?

Why continue bleeding after He was dead?

I mean, He said it was finished, didn’t He?

From the outset of His ministry, Jesus proclaimed that He came to bind the broken-hearted (Luke 4:18). Since we know we can trust His word, we can assume He heals those who have emotional hurts. When John reports that Jesus bled from His heart, He shows us the actual time and place where Jesus purchased this freedom for us.

The more I dive into the depth of what Jesus achieved for us— and what He continues to do in us— the more I see that:

The graphic below illustrates all seven areas Jesus redeemed. The two on the left highlight areas related specifically to soul wholeness. 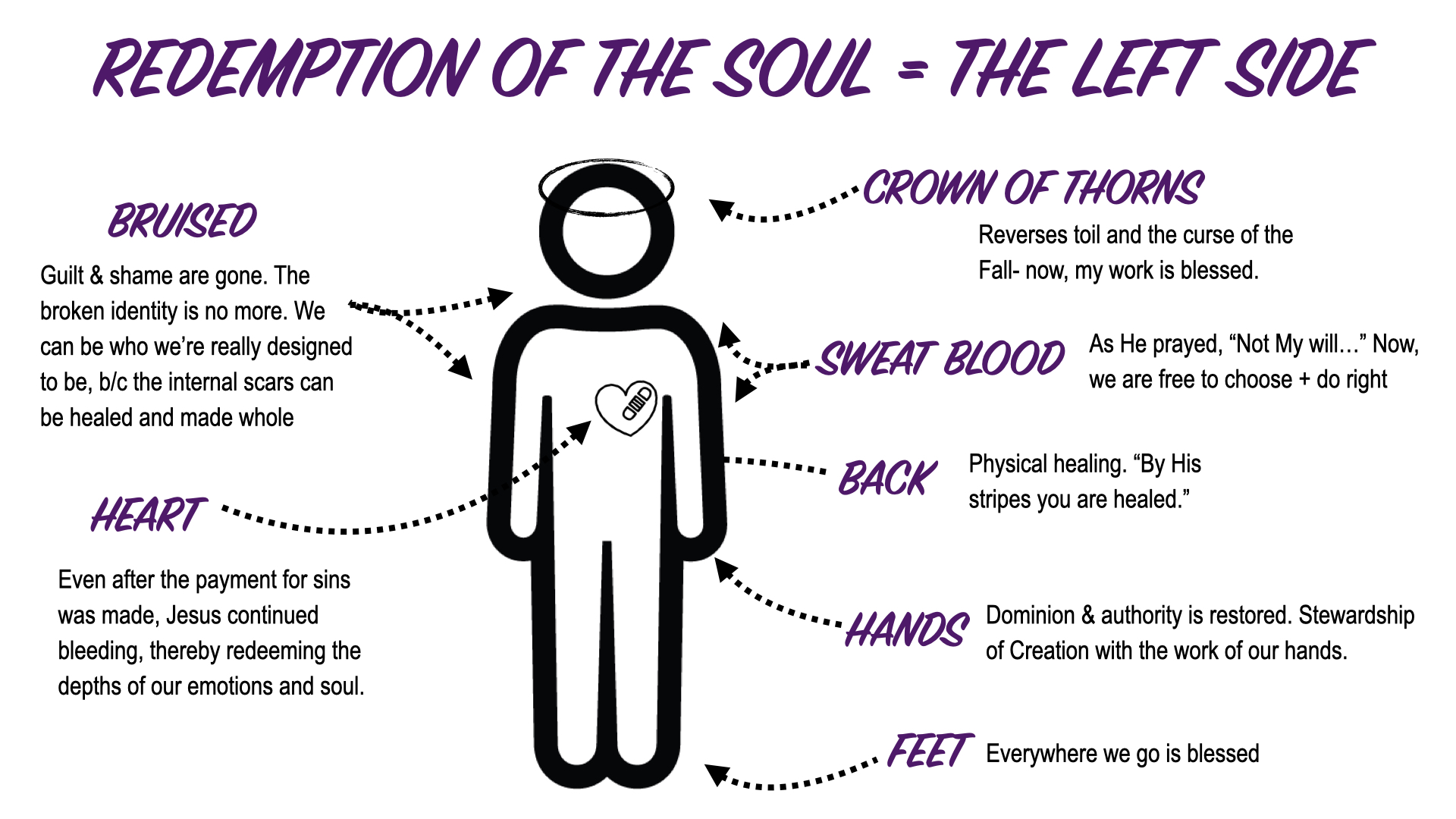 The promise of total redemption has no expiration date, no exclusion clauses, and no ineligible recipients.

Your freedom has been paid for.