I grew up in church— my Dad was the pastor. It's a longer story for another time and place (which I’m totally willing to share), but the blinders didn’t come off for me until I was in college.

I walked the aisle at the end the church service one Sunday morning. That’s how you let people know you decided to follow Jesus back in the 90s.

❌ There weren’t any “raise your hands while everyone keeps their eyes closed for your privacy” conversions.

❌ There weren’t any “check the box on the visitor card and drop it in the offering plate” salvation experiences.

✅ Everyone walked the aisle— just like a Billy Graham crusade.

Our church always sent you backstage with a counselor— someone to take your personal information and talk with you about your decision (a practice I believe is great, by the way).

A man named Jack, forty years my senior, led me to a classroom down the hall— a room in which I’d sat through numerous Bible studies— and spoke with me about my decision…

“Thanks. I’m not sure why it took so long for everything to click, but it finally just all came together.”

Then Jack told me something totally relevant to our conversation here…

“Well, when I look in the Bible, I seem to find all of this stuff that says we were saved, that we are being saved, and that we will be saved. It sounds at first glance like it’s a bit confusing, but I think it really describes what’s going on with you…”

Jack was a glass guy. He fixed windows and doors. He sounded more like a carpenter than a preacher— an assessment the Pharisees likely made of Jesus Himself, the famous carpenter’s son from Nazareth.

Jack explained, “The Bible says that God chose us in the past. He fore-ordained from the foundation of the world that we would be His children.”

“What does that mean to you?” I asked. “Do you think that means we were saved— past tense— that God knew it was going to happen, even if we didn’t walk into the reality of it for thousands of years after He made that decision?”

“I believe it does,” Jack replied. “I think theologians and Bible scholars make some of these concepts way more confusing than they should. But, yes, I think God chose us as His children. Your spirit was already connected to His. You’ve just now realized it— and awakened to what was already true.”

“What about the will be saved, future tense part?” I asked.

“Well, I’m an old man,” he said. “At some point in the next ten years or so, I’ll be gone. They’ll bury me at the cemetery. But the Bible tells us Jesus returns in the future, and the dead in Christ rise. We read about having a new body.” Jack patted his belly. Shaped like Santa Clause, he sat back and laughed. Then, he continued, “I could use a new one.”

“That’s past and future. What’s the present part?” I asked.

“Well, I think that’s what we’re doing right now. We’re figuring it out. We’re sorting it all in our minds and in our hearts.”

“Yeah,” I added. “In Philippians 2:12 Paul says to work out your salvation. He doesn’t say to work for it. He says to work it out…”

“I think,” Jack interjected, “that Paul is telling us to figure it out. The end of that verse says that God is working something in you… in the present. So even though we already are saved and even though we will be saved, I think there’s something we’re doing right now, too. We’re all in process. No one has arrived.”

“Maybe,” I said, “maybe this all means that our spirit has been saved, our bodies will be saved, and our souls are being saved right now… I mean, it’s all a done deal, but we get the experience of the journey right now…”

Those were the three parts of us we discussed—

👉 Spirit = was saved in the past

👉 Soul = is being saved in the present

👉 Body = will be saved in the future

Jack and I talked a few more minutes. He jotted my name, address, and other info they needed for the records. Then we went back to the worship service about to end.

Putting the pieces together

That day, I began building a mental framework as to how all of this works. And, no, none of the ideas are originally mine. Rather, I was pulling together pieces of what other people told me, even things I read.

It seems to me that all three “parts” of us will be remade into the image of Christ— at some point. Again—

👉 Your spirit is already one with His. It has been completed in the past.

👉 Your soul is in process. It is being renewed.

👉 Your body will be redeemed in the future. At some point this one wears down. Then you are given another.

(I talk about the soul-spirit differences here.)

We often take our cues from what our soul tells us. This is what most people do. However, this creates a problem. Namely, the soul takes its cues from the external world. It’s designed to. It’s how we filter reality to our minds and our feelings.

How many people do you know who eat emotionally— and can’t seem to lose weight, regardless of how hard they try, because their soul is out of line?

How many people do you know who self-sabotage their progress, effectively making themselves the greatest barrier to achieving their dreams?

Paul encourages us, “Since we live by the Spirit, let us keep in step with the Spirit” (Galatians 5:25). 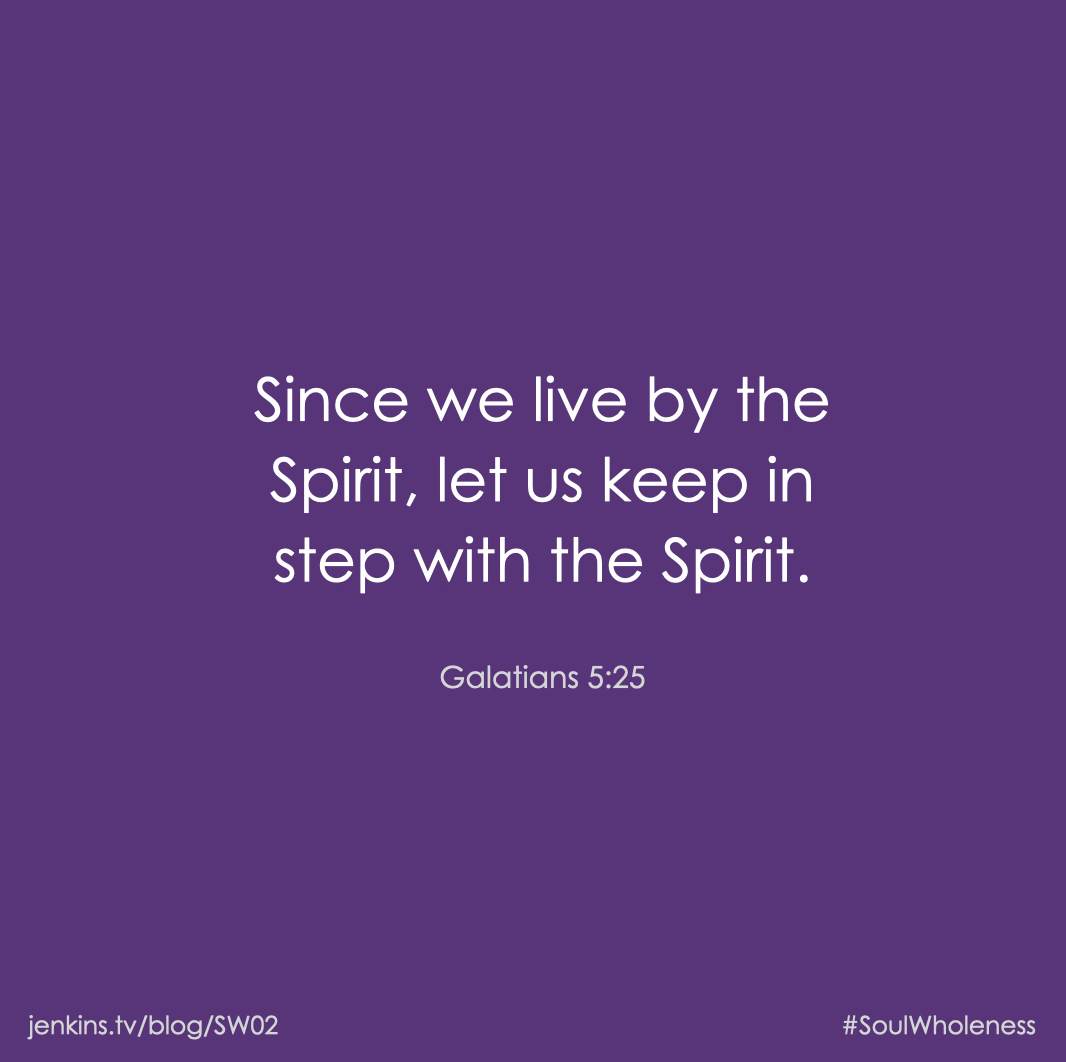 The term “keep in step” is actually a military marching term. Just as soldiers match step-for-step with the warrior ahead of them, so also should we align ourselves with the Spirit. This demands we (sometimes) tune-out the environment around us, and listen to His rhythm.

Or, to say it another way, “Sometimes we need to change the soundtrack.”

The chart here helps you identify the three parts of you, as well as see how the Lord works in each one to move you towards your optimal self. 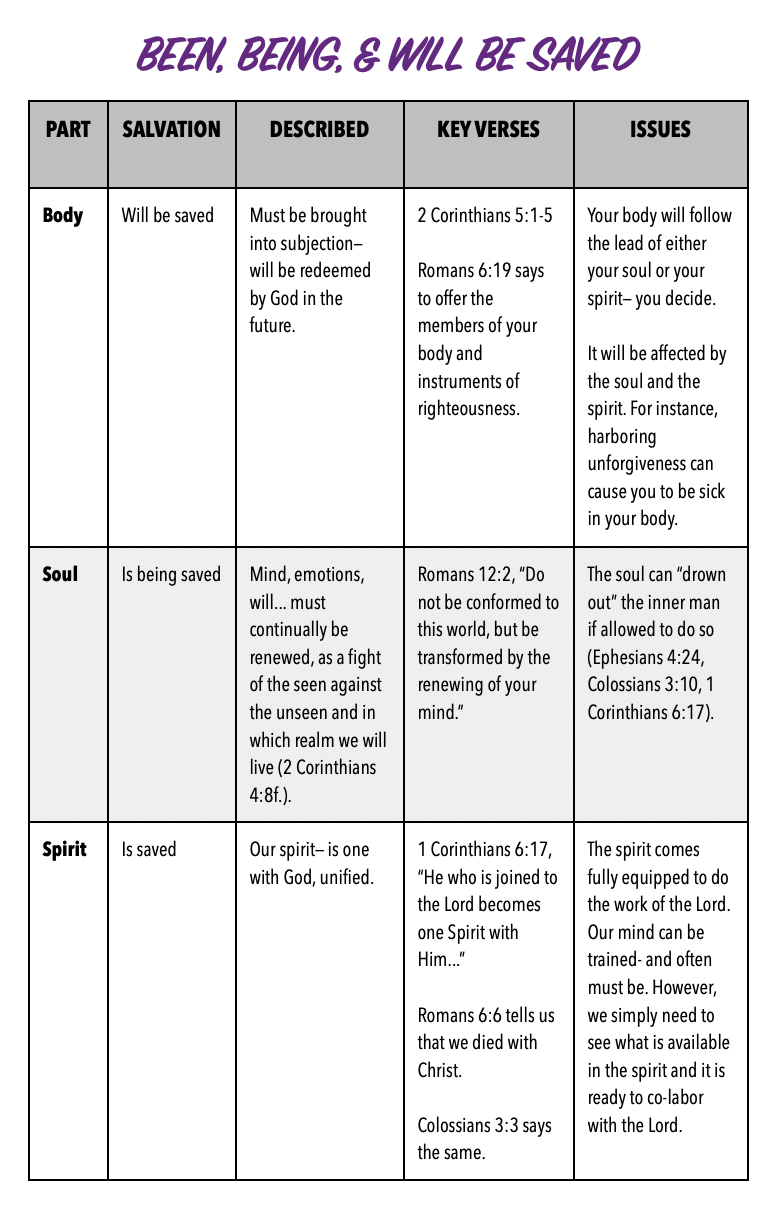 Again, God stands outside of space  + time. In the past, Jesus completed a work so radical that it pulled our spirits from the present and fused them with His. In the future, our bodies will arise-- and be renewed. In the present, we walk out-- in real time-- the reality of what He has already achieved.

That's salvation past, present, and future...

By the way, this info is available in—

Or, you can take the free, 2-minute PTSD self-check and examine your soul position here: www.Jenkins.tv/PTSD

Learn more about the difference between the soul and the spirit at www.Jenkins.tv/blog/SW01