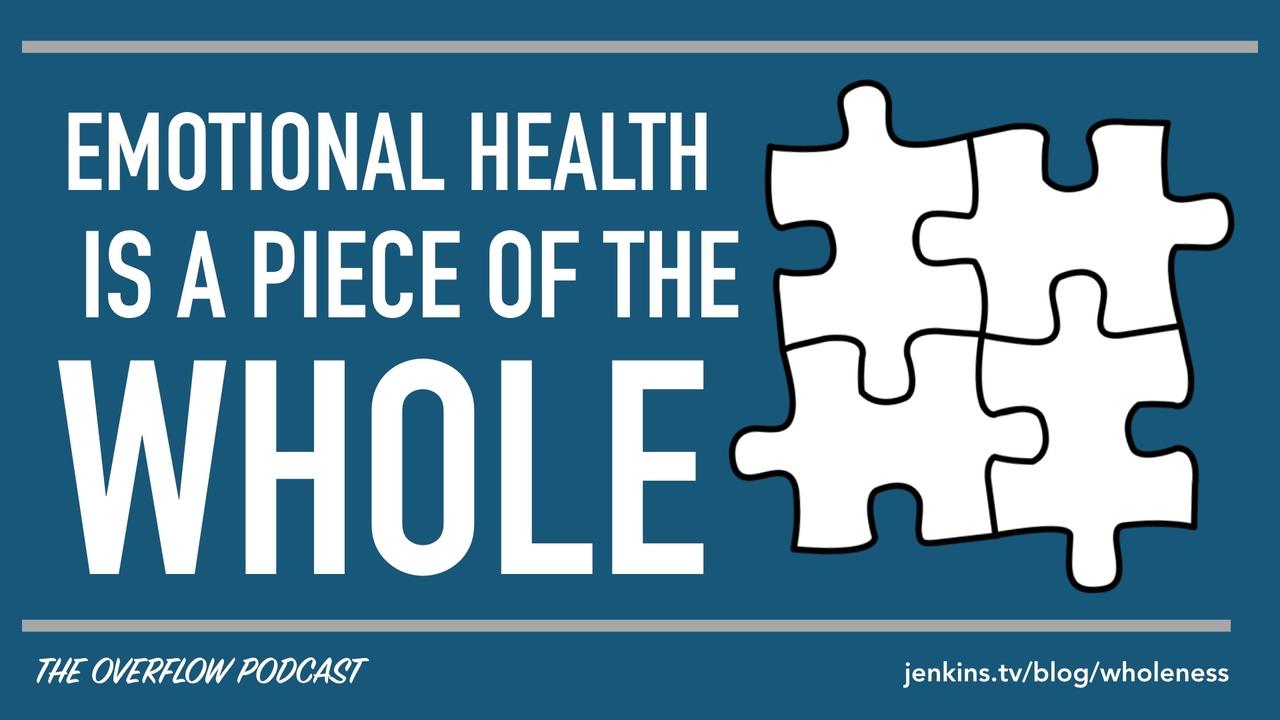 Podcast: Emotional Health is a piece of the whole

In this talk we take last week’s release a step further (review here: https://www.Jenkins.tv/blog/baggage). I pulled the content from this talk from some info I planned to teach to a live audience re: emotional wholeness…

We’re all multi-faceted people, having various parts to us.

We readily identify with the first four- but maybe not the fifth.

And, we generally OWN and notice the OBVIOUS issue in any area with the exception of emotional issues.

(I spoke more about this in this talk, https://www.jenkins.tv/blog/checklist, where I actually begin with the same point.)

Turns out, though, that you’re only as strong as the weakest link.

Look at it this way: a 20-link chain with 19 links can carry 1,500 pounds and one link that can hold only 15 pounds will never lift more than 15 pounds. Regardless of how powerful the other 19 are, they’re held back by the weak link. That’s easy to understand, right?

Well, in the same way a chain will never prove stronger than its weakest link, well…. neither will we. Think about it with me… 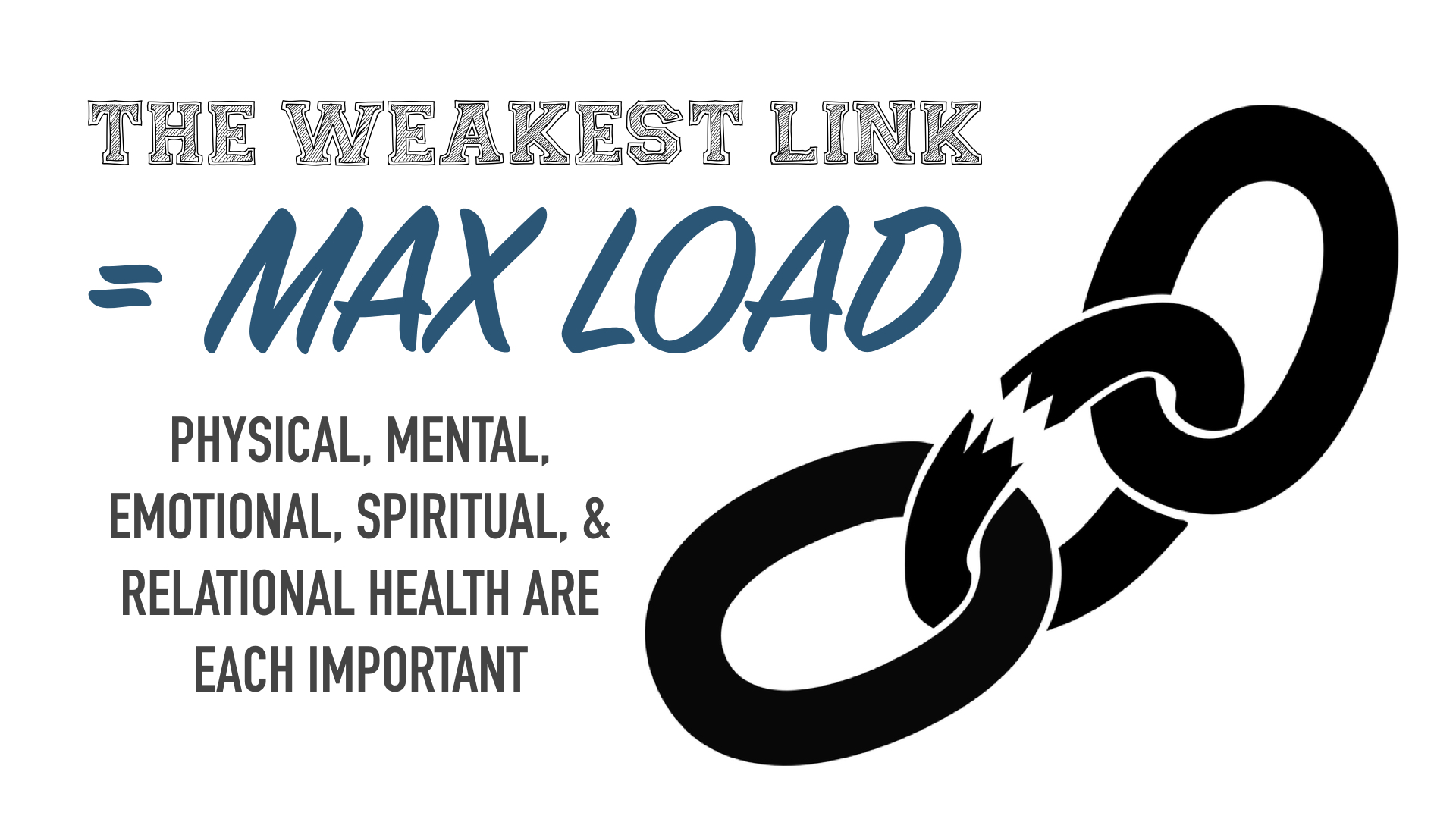 That leads us to the next point…

The book Emotional Intelligence 2.0 reminds us, “Emotions always serve a purpose.” Even the “bad” ones.

Rather than running from tough feelings, true Emotional Wholeness involves recognizing your emotions, reading what they say before you react, and then responding to the world around you in a healthy + intentional way.

Recognizing them is vital to understanding their purpose. And recognizing requires that we spend some time learning what some of those emotions actually are, so that we can read them properly when we encounter them.

Second, realize what your emotions are telling you- without reacting to them.

Remember some of the analogies we’ve made in other places:

If you can learn to recognize the emotion and then read what it’s saying without first reacting, you’ll find you’re light years ahead of 99% of the people in the world around you.

Third, finally, respond in a healthy way. After taking in what you sense, and after getting clarity on how you should respond (with intentionality, whatever that response happens to be), then move forward with clarity and humility. 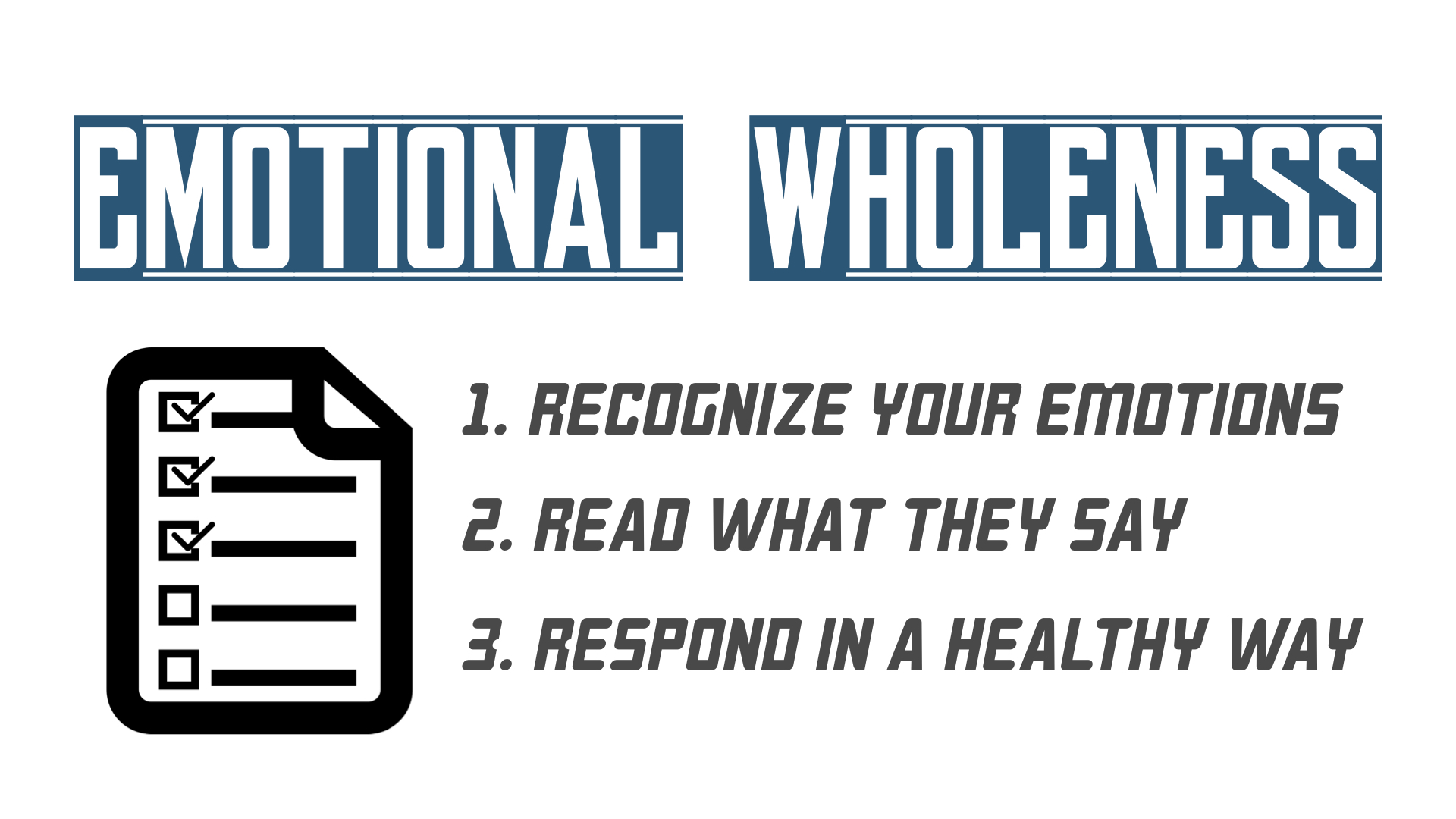 Here’s what our “checklist” looks like in the real world.

Take a look at it and then we’ll discuss the graphic briefly, as it will help you in real life situations. 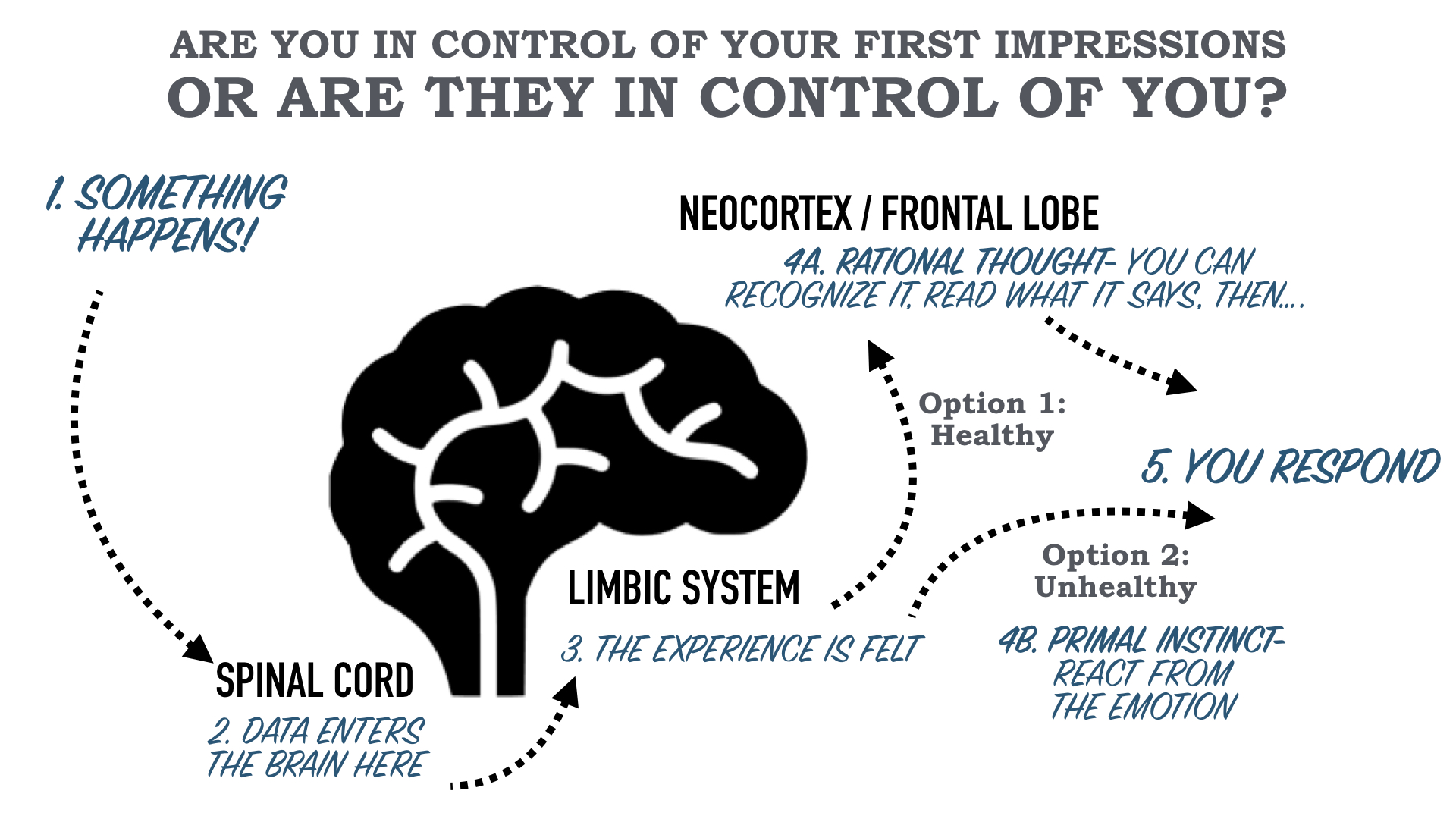 Here’s what occurs every single day…

First, something happens (far left of picture). It might be new information that we gather, a phone call or text that is received, or something someone else does.

Then, after we feel the experience (yes, this happens before we logically think about how to respond!), we have two choices…

Remember, our emotions are one of the “parts” of our whole being. And, like that chain, we’ll only be as strong as our weakest link. A more emotionally whole you is a far healthier you- in every area.

(Again, I discuss these steps in more detail in https://www.jenkins.tv/blog/checklist and in my book, Emotional Wholeness Checklist.)

This leads us to our third point. Since we we “read” all of the emotions, it makes sense that we can read the emotions related to Post Traumatic Stress…

We can read the signs of Post Traumatic Stress

Again, It makes sense that we can read the signs of Post Traumatic Stress because, in fact, we can read other emotions.

That said, experts generally agree there are four broad categories of symptoms that help them to recognize and diagnose PTSD properly. Note: you can experience multiple symptoms concurrently.

You might read those four points and think, “Those responses seem fairly common.”

Turns out, they are. Depending on this situation, you may have experienced each of these symptoms before. I have.

This is one of the reasons I advocate walking in health far more than I encourage seeking a diagnosis. Besides, a diagnosis means nothing if you don’t follow through with the intention to live healthy and whole.

That said, the result of feeling these symptoms generally takes two opposite approaches, depending on the makeup of the person:

Some people fight. Some people choose to turn and face a direct threat. They may become aggressive and launch a retaliatory assault- even against perceived (yet unreal) threat.

You may have done this or you have experienced this being done to you before when someone “pops off” verbally in a way that’s disproportional to the actual threat they’re experiencing. “The best defense is a great offense” is the mantra of survivors who choose to fight. 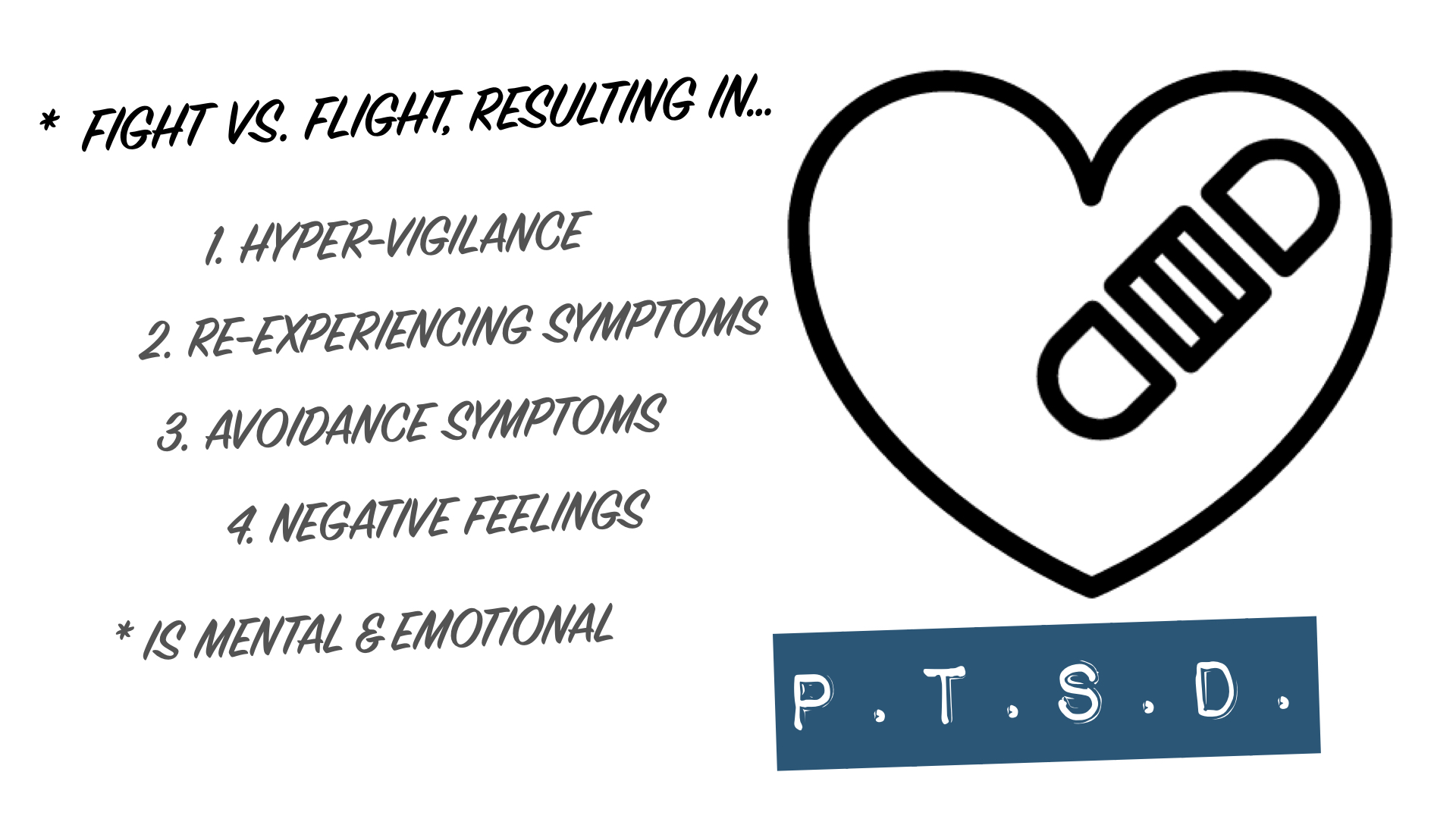 Notably, some people might choose to fight in some situations while electing to take flight in others. Often, it depends on the type of perceived threat, as well as whether or not they feel responsible for others who are present (example: I might respond to a true threat of a car-jacker differently if I was alone as opposed to if I had my daughters in the car with me).

Now, what’s uncommon is the formal diagnosis. In order to be diagnosed, people must meet specific criteria.

In the Warrior Hope book we included a self-evaluation / Post Traumatic Stress test. When I was writing the book Warrior Hope (for veterans), my coauthor and I located the test on a VA website. 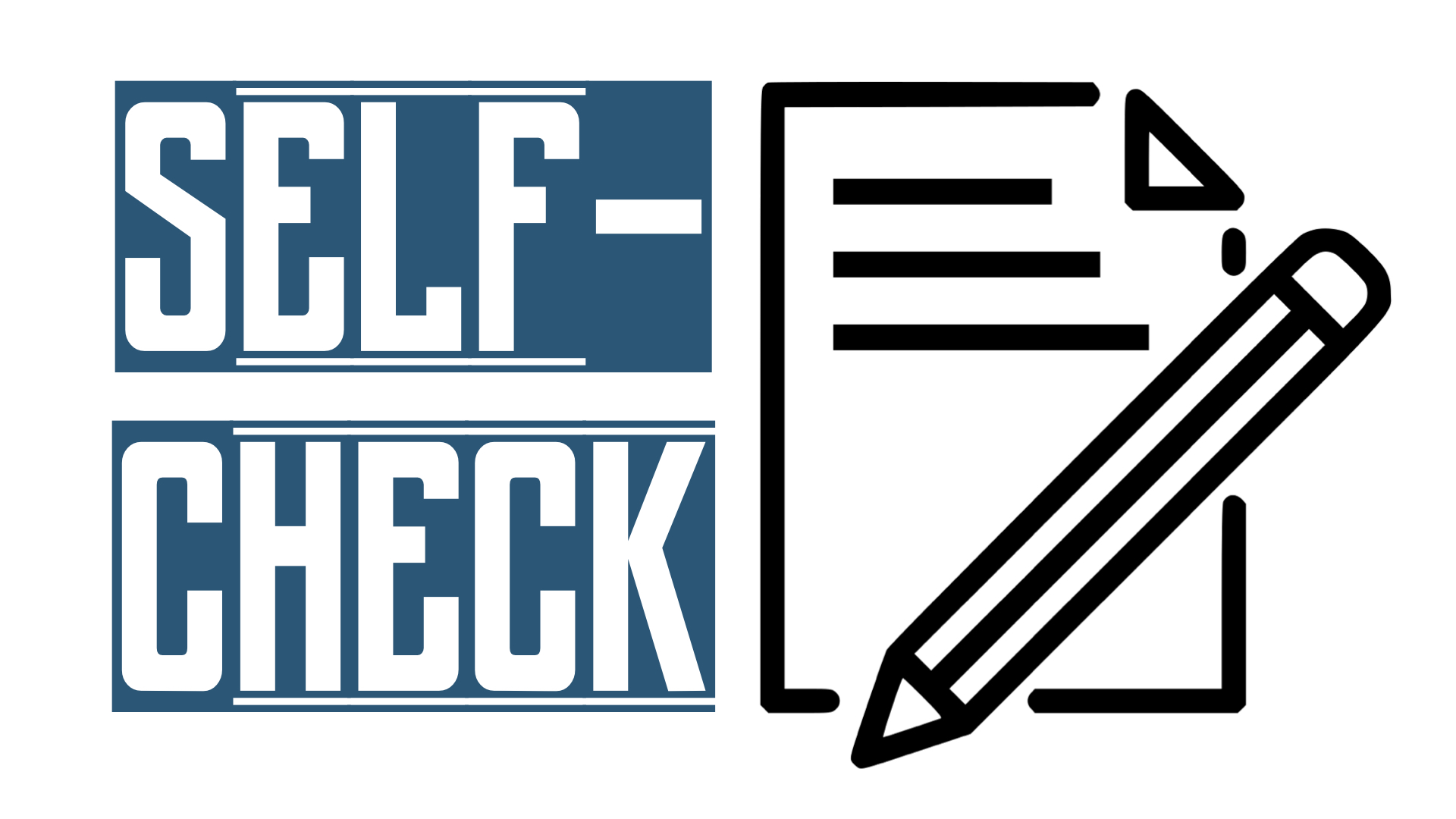 The version of the test in our book lists 8 criteria related to PTSD.  At the time I began researching it, veterans were required to meet all 8 in order to receive a formal diagnosis. In addition, three more factors came into play-

In my mind, there are a couple of red flags with all of this.

First, many times it’s difficult to hitch soul wounds to a specific event. That is, traumatic feelings are often the result of a series of events. For instance,

Because of the nature of life and the changing dynamics of human relationships, in most situations it’s hard- if not impossible- to determine which precise instance of trauma is the straw that broke the camel’s back.

Second, humans have an uncanny way of white-washing the past, of looking through the rear-view mirror with rose-colored classes. We tend to minimize the emotional hurts we feel, because of two facts: 1) time does heal a lot of wounds (or, at least, it heals them to some degree), as well as 2) someone always has it “worse” than us (we’ll circle back to this notion in a future chapter). As a result, depersonalization and de-realization are real issues that occur even when people are healthy.

Third, finally, waiting 6 months from the onset of traumatic injury until a diagnosis is received is, on one hand, a positive step, but it’s short-sighted. It’s rarely a good idea for someone to receive a diagnosis after just a few days. The wounds are too raw to completely assess.

At the same time, we clearly  don’t wait for 6 months to label physical wounds. When something is amiss, we address it. In large part this is because, particularly when it comes to physical hurts, the gaol is often to “get well” rather than living in the diagnosis.

And maybe they should be case. After all, we’re looking at a label someone will carry with them for quite some time- a moniker that often lands on job applications, school forms, and every health questionnaire you’ll ever complete in the future.

But let’s say you emphatically do want to walk in health + wholeness. That's probably most of us, too…

Are you less affected because you score a 7? Does that mean you shouldn’t address the emotional hurts that caused you that much (but just short of diagnosable) internal pain?

I’ve read and re-read that test dozens of times. I’ve looked at it as I've listed to veterans and business partners and friends share their stories. I believe that most of the people who read this book probably score 5-6 on the test. They’re not diagnosable for PTSD any more than the average person on the street is diagnosable with cancer.

But not having cancer doesn’t mean we don’t walk in perfect physical health any more than not receiving a PTSD diagnosis assures we’re emotionally whole. There’s always room for greater levels of health- especially when we’re not afraid of labels and we’ve embraced the notion of total wholeness as the goal.

Again, the goal isn’t to receive a diagnosis (nor is it to necessarily avoid one). The goal is complete wholeness. And the reality is that, in some sense, precisely because life is both good and simultaneously hard, most of us have soul wounds. 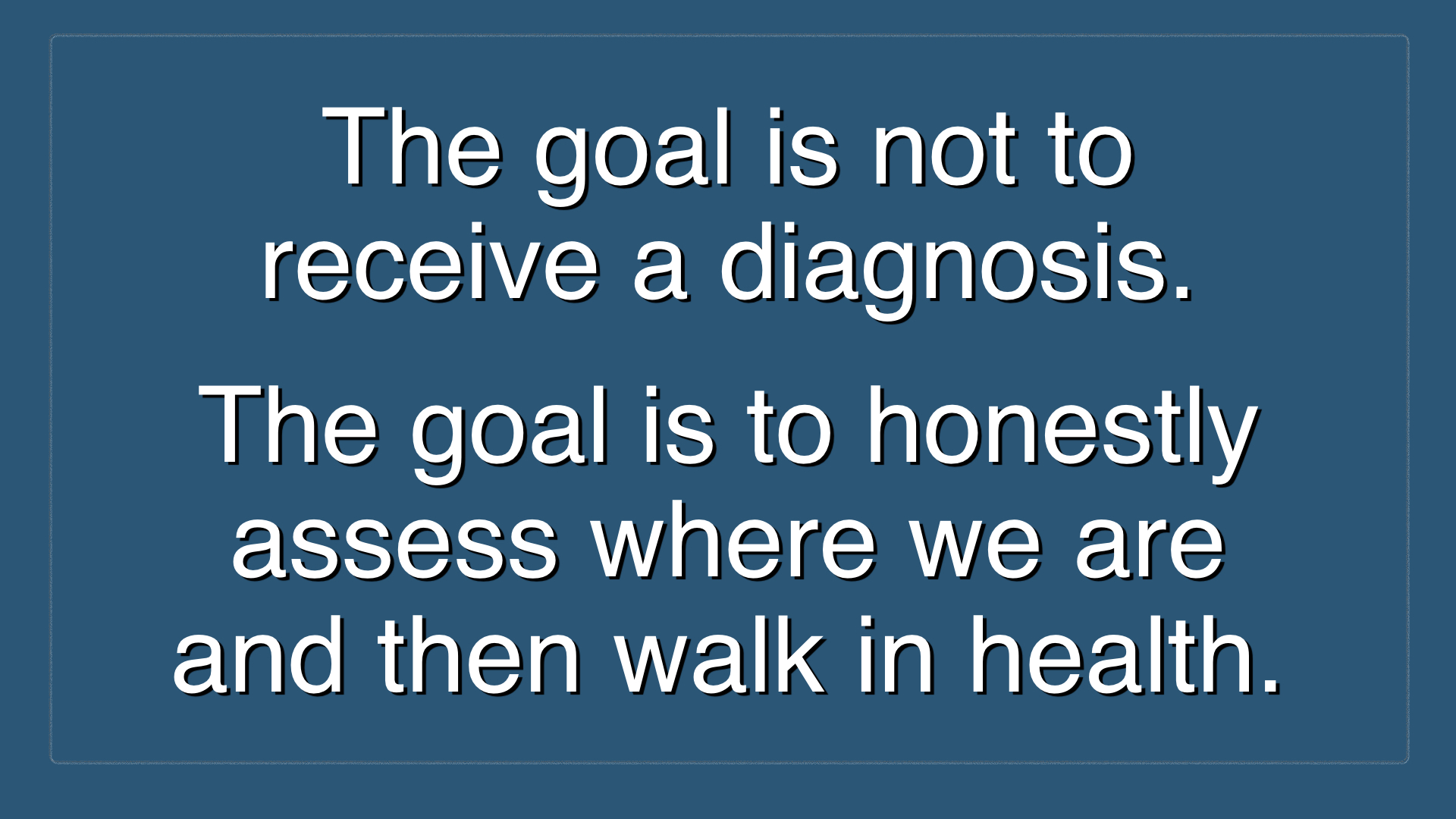 By the way, we can grow in this area

I was reading Emotional Intelligence 2.0 and came across some interesting stats…

How? By learning to recognize your emotions when they happen… then STOPPING to read what they’re saying before you respond.

Not only does this help us succeed in business, this empowers us to walk “more well” in all of life. 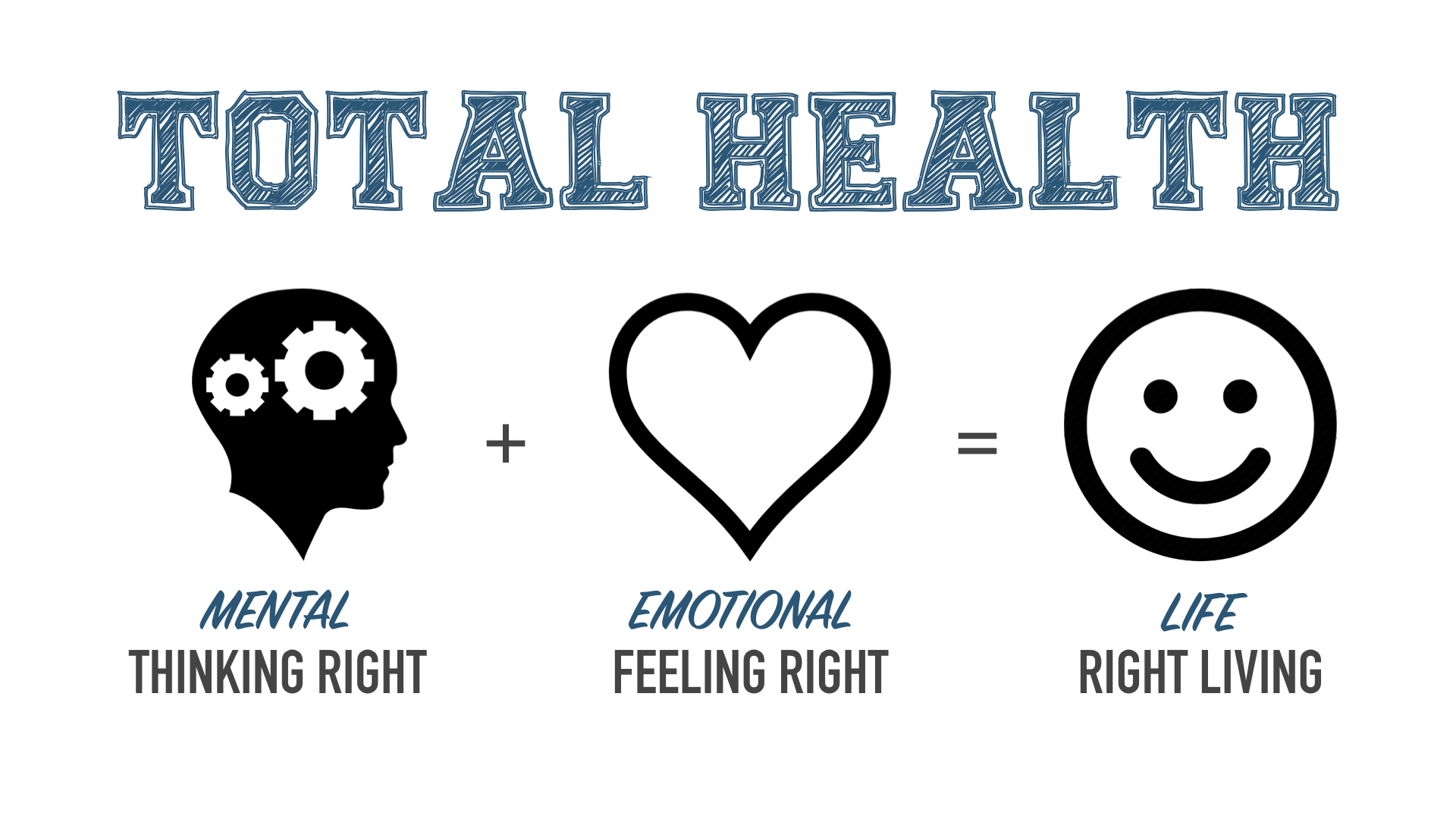 Links for this talk-