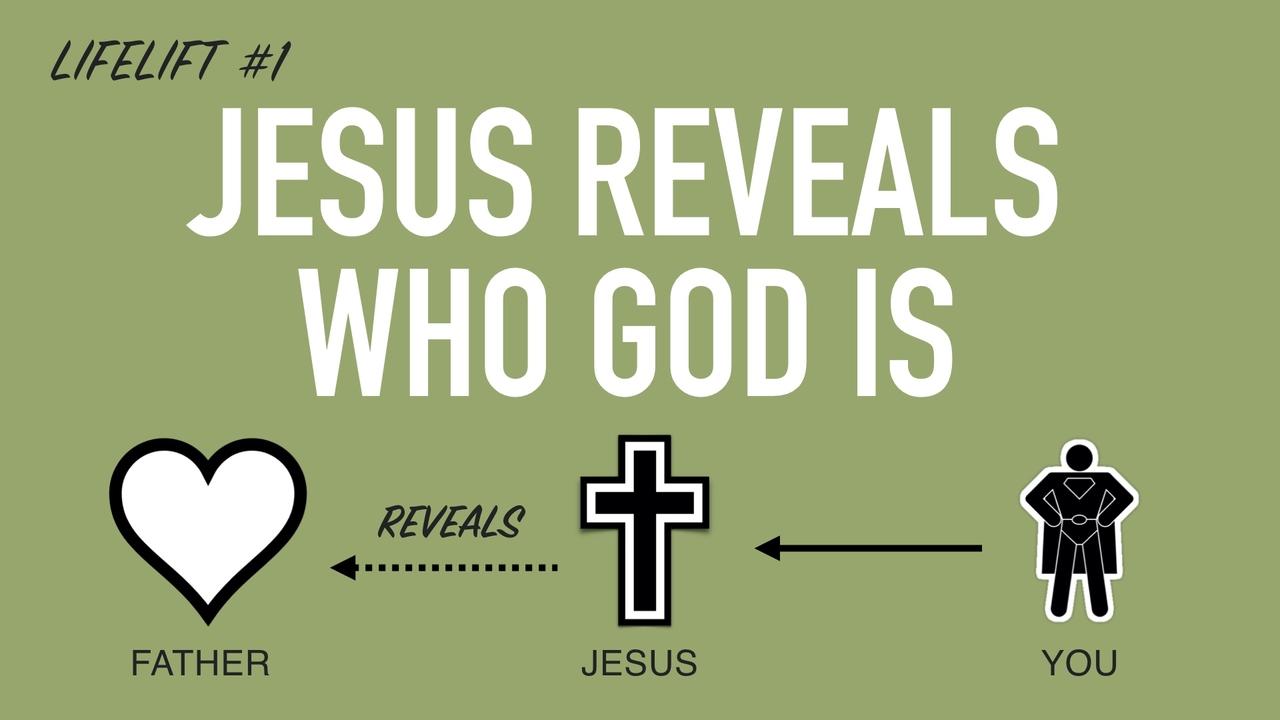 John opens His Gospel with a revolutionary idea: “No one has ever seen God,” he writes, “but the one and only Son, who is Himself God… has made Him known” (John 1:18 NIV). Even though people weren’t certain what the Father was like, Jesus revealed exactly who God is. He is God and He expresses God’s complete essence.

That doesn’t sound like a huge theological jump to you or me. But, put yourself in the place of a person reading John’s Gospel 2,000 years ago. To them, John’s statement was an astounding leap— this assertion that Jesus “put flesh” on their theological constructs about the nature of God.

Some of the heroes of their faith encountered God throughout history in radical ways. Everyone knew those stories well. They shared the true tales with their kids regularly (see Deuteronomy 6:7, 11:19). But no one had actually seen Him.

The notion that God would just “appear” and begin walking among His people was far-fetched. It was impossible. As such, it never even crossed people’s minds.

In Jesus, rather than remaining “unseen” or being seen “in disguise” or through a mediator, God was present as a human. He was one of us.

Jesus’ disciples spent about 3 years with Him. Even after all the time they spent with Him, they still had difficulty comprehending this. As He spoke to them in the upper room the evening before He was betrayed, He explained to them that He was “going away.”

As they discussed what this meant, Phillip said to Jesus, “Just show us the Father and that will be enough.”

Then, Jesus elaborated with words which prove to be one of the most revealing passages in Scripture about this subject. Let’s read it and then continue our conversation (John 14:6-11 NKJV, emphasis added):

Jesus said to him, “I am the way, the truth, and the life. No one comes to the Father except through Me. If you had known Me, you would have known My Father also; and from now on you know Him and have seen Him.

Phillip said to Him, “Lord, show us the Father, and it is sufficient for us.”

Most often, if we ask people in the Church, “What is Jesus the way to? Where is Jesus taking us?” they will answer that He is “the way to  Heaven- He is taking us to Heaven.”

But that’s not what Jesus emphasizes in this passage.

Yes, it’s true that Jesus takes us to Heaven. In fact, in John 14:3— just a few verses before the passage I showed you— Jesus promises to go “prepare a place” for us. That verse is read at most funerals as an incredibly valid reminder. But, that’s not the emphasis of the disciples or Jesus (this “place” idea is so ingrained in us, by the way, that you may have answered “Heaven” is where Jesus is taking us— even after just reading the Scripture above!).

Notice, Jesus came to take us to a Person (the Father)— not just a Place (Heaven). Again, it’s true that we get to go to a place— but the place only matters because of the Person.

This is similar to what Jesus revealed to the repentant thief on the Cross, by the way. He said, “Today, you will be with Me (a Person) in Paradise (a Place)” (see Luke 23:43). Again, the personal aspect, the connection, is the bigger issue.

Jesus tells us in the passage from John that:

Again, Jesus came to reveal a Person- not just a Place. And, according to Him, He does so with the words He says (14:11) and the works He does (14:11). The words and the works are both important.

Notice the graphic. We’ll continue adding words, arrows, and ideas to it. Here, we see our first  concept: Jesus reveals the Father. 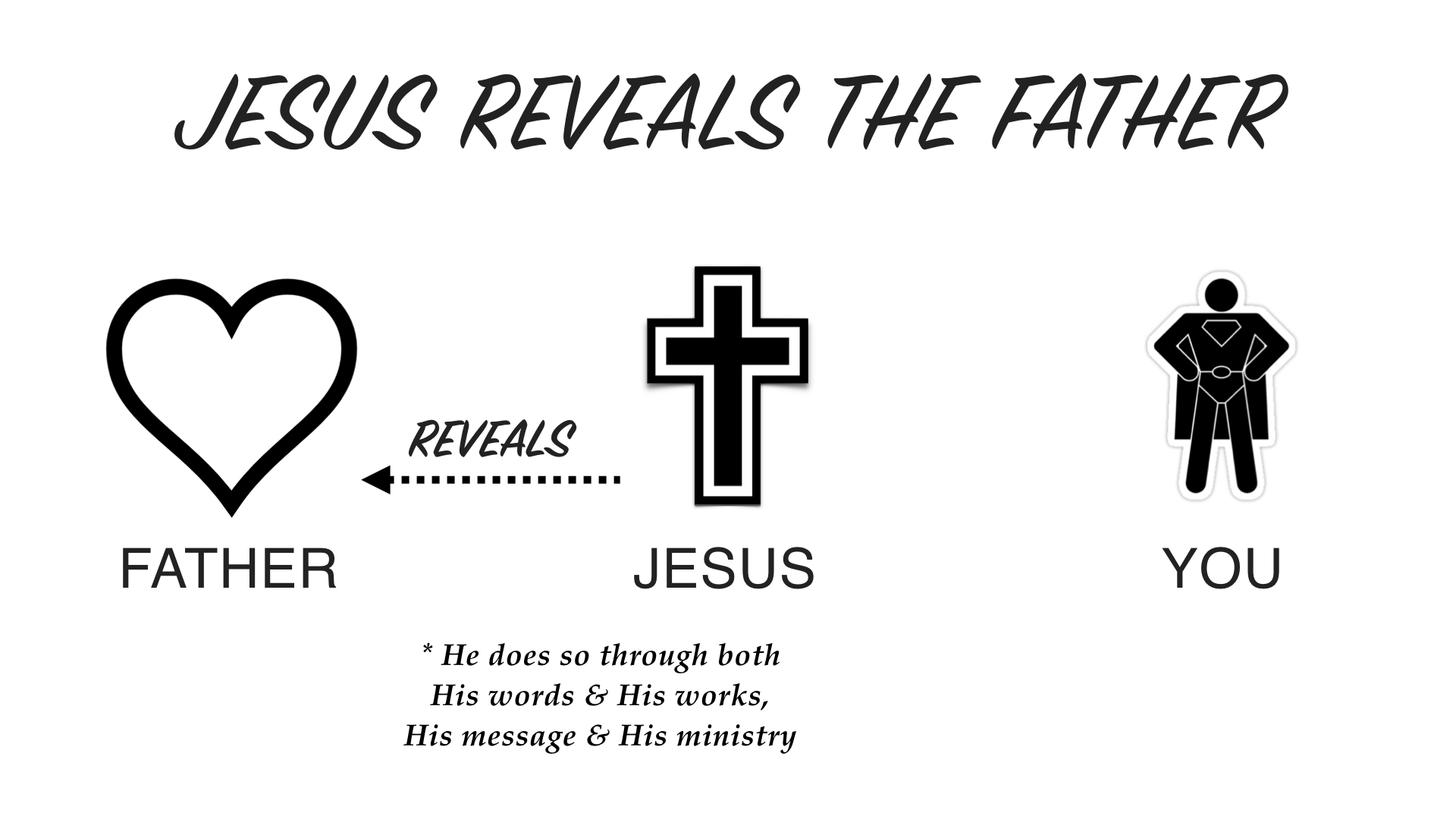 Our behavior always broadcasts our beliefs. Our actions always reveal what we truly think. In other words, our actions are simply the fruit of thoughts and belief structures. If we believe God is “for us,” then, we’ll  feel and act differently towards Him than if we feel and think He’s “against" us.

Our beliefs about Him will determine how we treat others, too— even filtering the ministry or service we attempt to do. If we believe our Heavenly Father is pro-healing, for instance, we’ll minister and live differently than we will if we feel He stopped healing thousands of years ago, deliberately withholding healing now to teach people lessons, or even cause illness as a form of punishment.

Furthermore, our beliefs won’t just affect the things we do, they’ll also affect the tone in which we do them. The way we approach others we seek to serve will manifest differently, based on what we believe about God. We’ll express to them what we believe to be the essence of Him.  For instance, if we believe God uses prophecy to build up and encourage others, we’ll communicate differently to someone who is ensnared in sin (1 Corinthians 14:3). Our beliefs about God will color the entire tone of our ministry.

The starting point for anything in life is, really, understanding who God is. Since we’re created in God’s image, by understanding His nature, we get a better grasp of who we are and our ultimate destiny. Everything overflows from here. That’s why it’s important to recognize that Jesus is showing us exactly who the Father is.

Not the first time

A few paragraphs ago we learned that, in the Upper Room, Jesus told His disciples that He came to reveal the Father (14:9f.). This wasn’t the first time they heard this, though.

In John 5 Jesus healed a lame man who sat near the Pool of Bethesda, waiting for the waters to be stirred by an angel (5:4). Whoever jumped into the water first was always healed. Trouble is, that man was lame.  For 38 years, someone always beat him to the healing (5:5). Jesus asked him if he wanted to be well, and the man explained his dilemma.

In turn, Jesus spoke the now famous words we hear repeated throughout the Scripture, “Take up your mat and walk” (5:8).

The problem with this was… well, it was, as you might imagine, the Sabbath.

The Pharisees launched an all-out assault on the action, questioning why Jesus would, first of all, heal someone on their holy day. This, secondly, forced a man to carry his mat (manual labor), thereby transgressing commandment number 4, to honor the Sabbath (see Exodus 20:8).

Jesus replied that He did this because this is what the Father was doing. “For whatever the Father does, that the Son does likewise” (John 5:19 ESV).

He explained that He only does what He sees the Father doing. This, according to Jesus, is why He does everything He does. Jesus elaborated to the Pharisees— like He did with His disciples— that this was true of both the words He says (5:36) and the works He does (5:38). That is, He revealed the Father through both His message and His ministry.

In other words, every time we see Jesus doing anything, we see the heart of the Father in each instance of Jesus ministering throughout the Gospels.

Practically speaking, this means that whenever we see Jesus doing something we actually see the Father doing that very same thing. For instance—

We can apply this logic to the things Jesus didn’t do, as well— the implication being that He refused to do certain things because those aren’t the things He saw the Father doing. 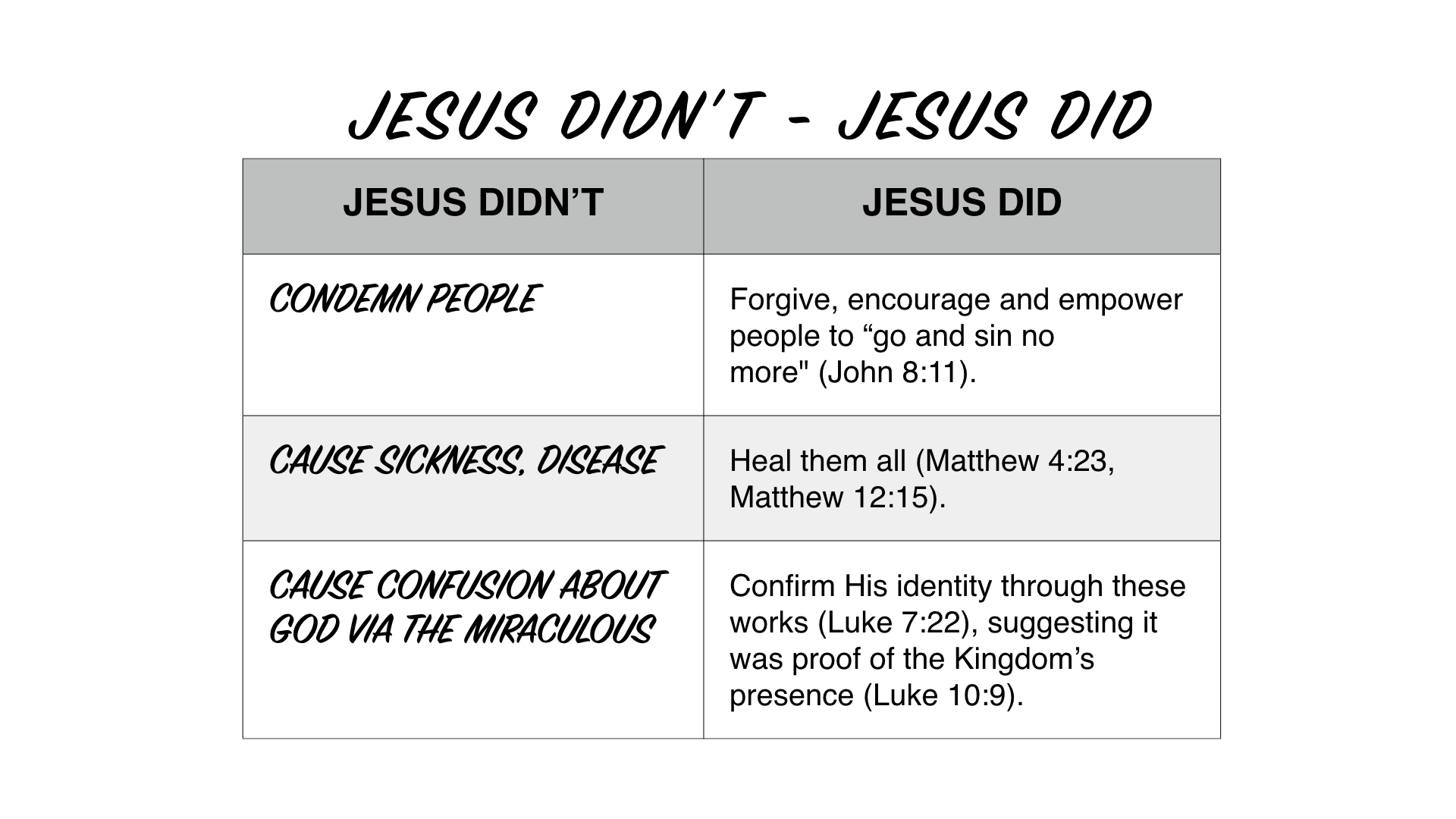 The passages from John 5 and John 14 in which Jesus affirms to us that He reveals the heart of the Father aren’t the only two times we find this great truth in Scripture. When Jesus rescued the woman who was caught in adultery, He was clear that the Pharisees who accused her that they obviously didn’t know the Father because they didn’t know Him (John 8:19).

Because to know One is emphatically to have a clear picture of the Other.

The same concept is expressed in various ways throughout the remainder of the New Testament:

I read a book by Jack Frost a few years ago, back when I was first beginning to study this concept. By his own admission, Jack was an extremely hard-hearted, gruff man. He was an emotional bulldozer who readily plowed over people to complete projects and press his own agenda.

Then he encountered God— the tender-hearted Father-version of God we see in Scripture. Not the legalistic, more-like-a-Pharisee-than-a-Pharisee version we often envision. The experience revolutionized Jack’s entire life.

In his first book he writes,

Jesus came to demonstrate who the Father is and what He is like, and He does so through His words and His actions. To gain a true picture of the Father’s feelings toward His children, it is best to turn to the One whose purpose it was to show us the Father.

Jesus spent three years in ministry, demonstrating His Father’s heart of compassion as He forgave sinners, healed the sick, and raised the dead.

It’s worth repeating: if you know what One is like, you know what the Other is like! Imprint it on your mind, like a tattoo for your soul:

When we see Jesus, though, we see a picture of what the Father is like. He is not angry, nor is He a trickster. He is not temperamental. He is gracious.

Let’s add to a few things to our picture, the one we introduced a few pages ago. We noted that Jesus reveals the Father, so we drew an arrow from Jesus (represented by a Cross) to the Father (represented by the heart).

Notice I drew a bold arrow from you to Jesus. We’ve seen Jesus directly. He appeared in history. Though no one has seen the Father (hence, the dotted line), we know what He’s like. Exactly what He’s like. 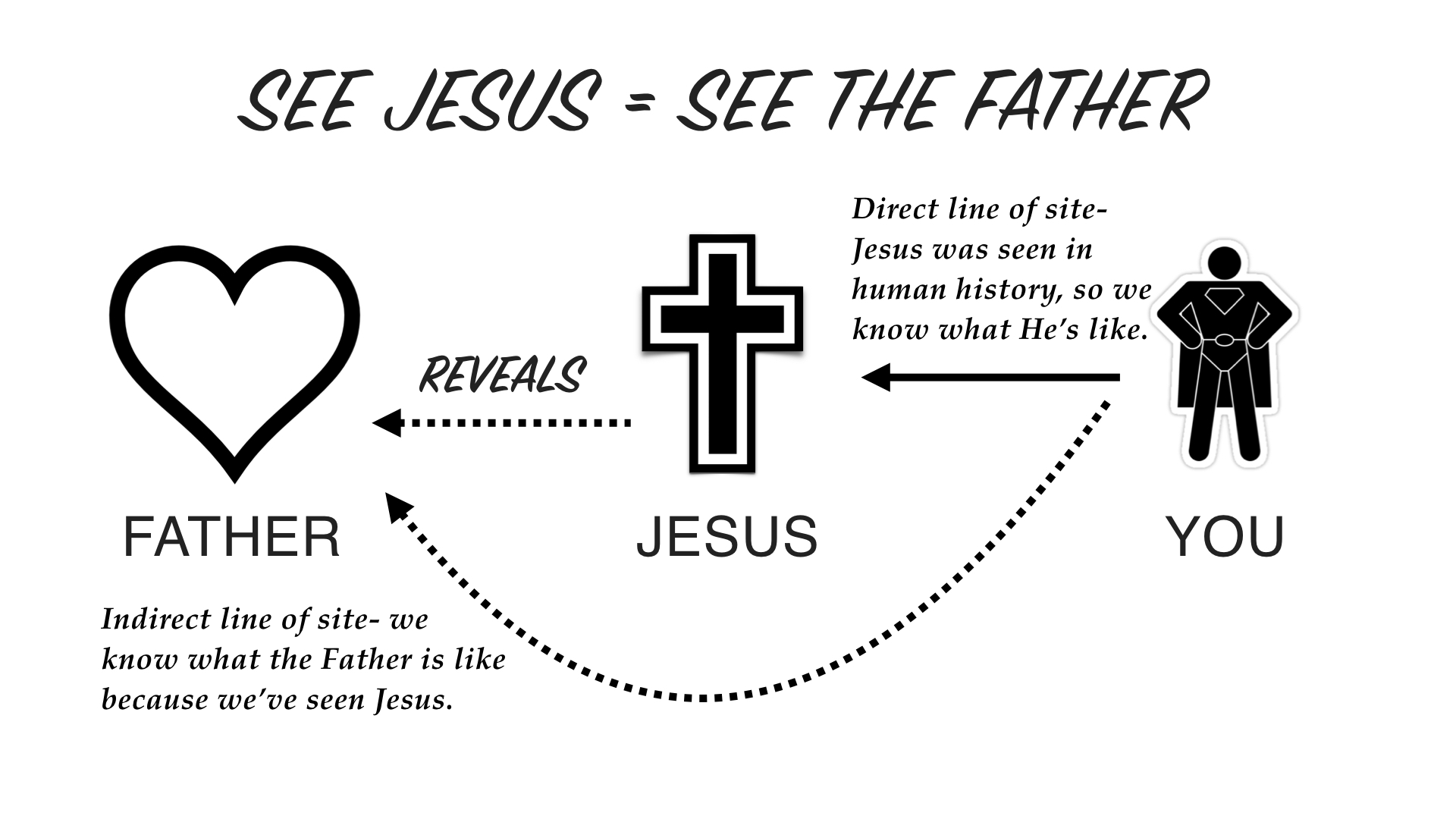 Because we know what Jesus is like, and Jesus reveals the Father.

As Bill Johnson has said, “Jesus Christ is perfect theology.” That is, in order to understand God (theology = theo / “God” + ology / “study of”) we should look to Jesus. He shows us exactly what the Father is like because He came to reveal Him completely. In fact, the fullness of God filled Jesus (Colossians 1:19).

Jesus was sent to do this, and…

That same night when Jesus was in the Upper Room and told His disciples that He revealed the Father, He offered them another insight as to the nature of God. He says that He was sent by the Father (John 12:45).

Of course, we find this concept throughout the New Testament, as well, this notion that Jesus was sent (i.e., Matthew 10:40, Luke 13:31f.). In fact, one of the first verses I memorized as a kid was this one:

And we have seen and testify that the Father has sent His Son to be the Savior of the world (1 John 4:14 NIV).

Let’s add that to our picture, too: The Father sends Jesus. 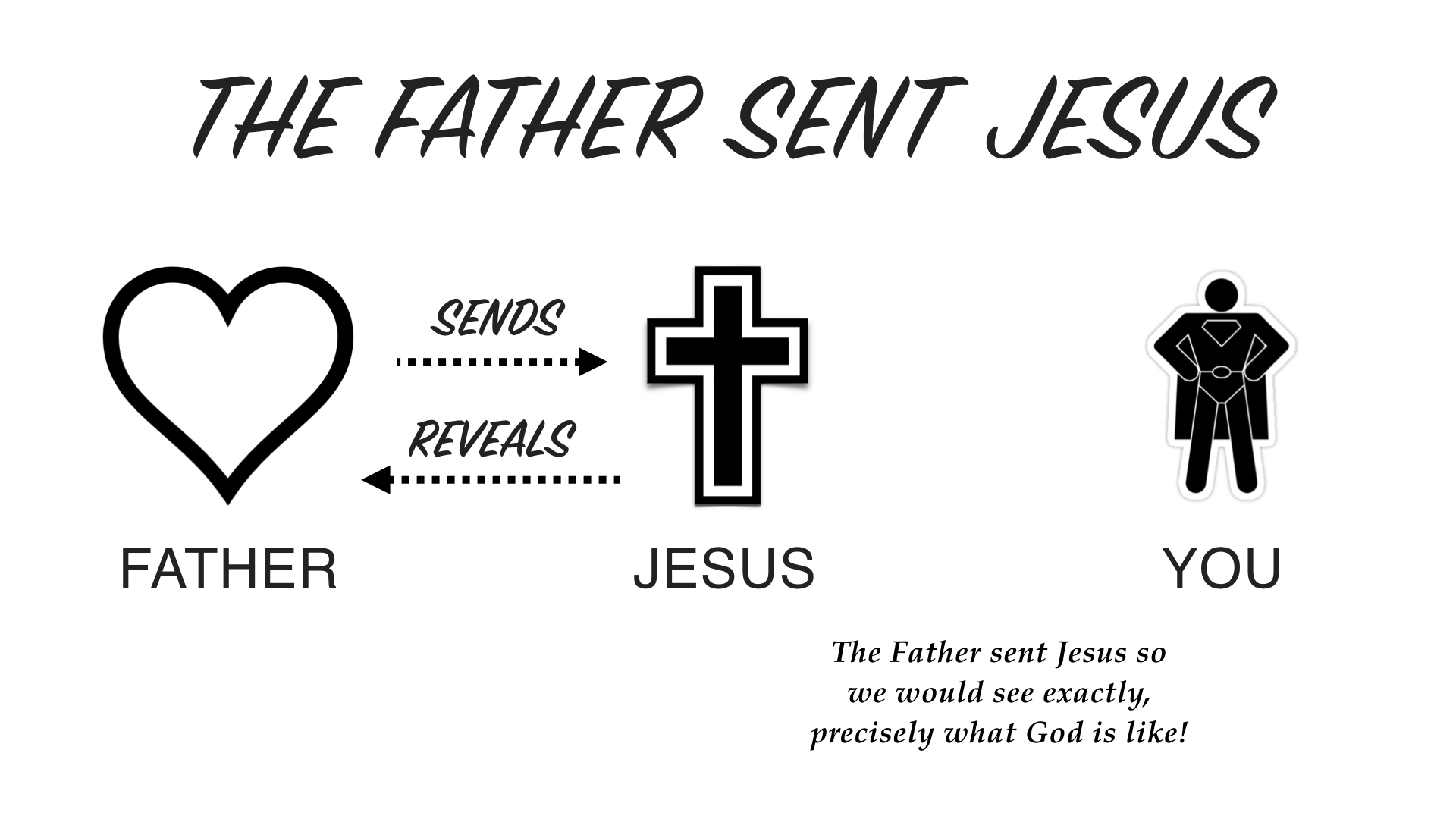 Jesus didn’t simply “show up” on this planet. It was a deliberate act of the God-head in order to reveal to us the very nature of God.

There’s something else Jesus was sent to do, though, besides reveal who the Father is. And that leads us into the next concept we need to discuss in this book: Jesus not only reveals what the Father is like, He also shows us what we’re really like.