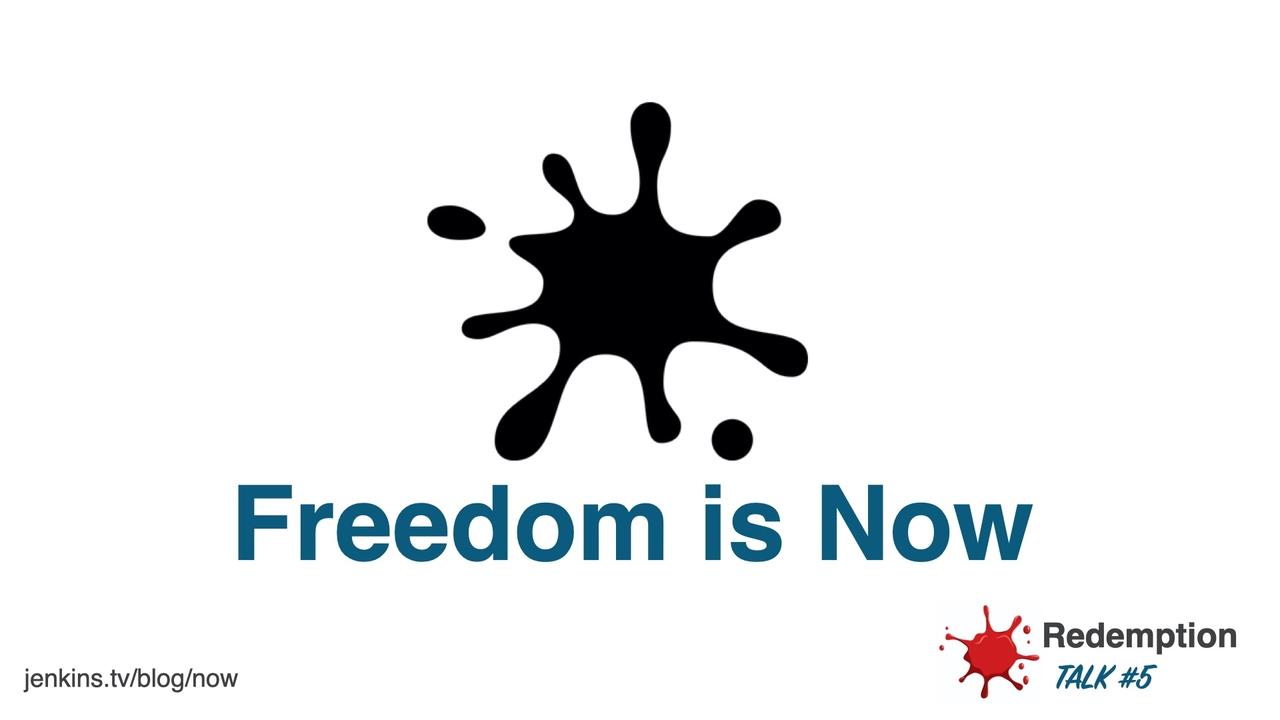 Salvation is so much larger than we typically think. Jesus not only forgives our sins (as incredible as that is), but He does so much more. In every place that Jesus bled He brought a new degree of freedom. At each point, He transformed your identity.

(Yes, transformed— past tense. It’s a past work. It’s already been done. We’ve got to learn to walk in the new reality, but it’s available.)

The model for redemption (which we understand to mean freedom) in the Bible is found in the Book of Exodus. The freedom God gifted Moses and the Children of Israel is the paradigm whereby we understand what Jesus has done for us. Throughout their story, we see a picture of what Jesus does for us when He redeems us by His blood at the Cross.

Furthermore— and this is incredibly important— the author of Hebrews reminds us that Jesus’ ministry is far superior to Moses’ (Hebrews 8:6, 3:1-6). I often hear people refer to the great stories of the Bible as if “that was available to them, but in the modern era those things aren’t readily accessible. Think about it this way, though. If the verse in Hebrews is true (I think it is), then instead of expecting less (or even the same) from the New Covenant, we should expect more.

Because it's a better covenant with far superior promises (see Hebrews 8:6).

A “now” sacrifice for a “now” freedom

In the Exodus from Egypt (physical slavery) the focal point was the passover lamb. More specifically, the blood of the lamb being placed on the door posts. If the blood was on the door casings, the Angel of the Lord would “pass over” the home. If not, the firstborn male of both people and animals would be killed (see Exodus 12:12).

Notice again that a person’s…

None of these factors mattered.

The Angel didn't look at their personal qualifications (or lack thereof), the Angel looked for the blood. If the blood was present, freedom was coming. Furthermore, their freedom was to be experienced that very  day.

Now, remember the connection Paul made: “indeed, Christ, our passover, was sacrificed for us...” (1 Corinthians 5:7b).

Christians often limit the effects of Jesus’ blood to the “after life,” to what happens when we die. However, the Blood of Jesus changes life now, in the present— just as it did for the Children of Israel who walked through the Exodus.

To the clear: we must proclaim— and apply— Jesus’ blood in this life. We should not simply see Jesus’ blood as a way to make it into heaven, but also as the means for living the abundant life now.

All too often, we adjust our lives around the problems we face. The bondage. The chains. The old mindsets. The Gospel invites us to overcome these issues in the present.

Notice the verses in chart below. Redemption in Exodus didn't give the Children of Israel a hope for when they died. 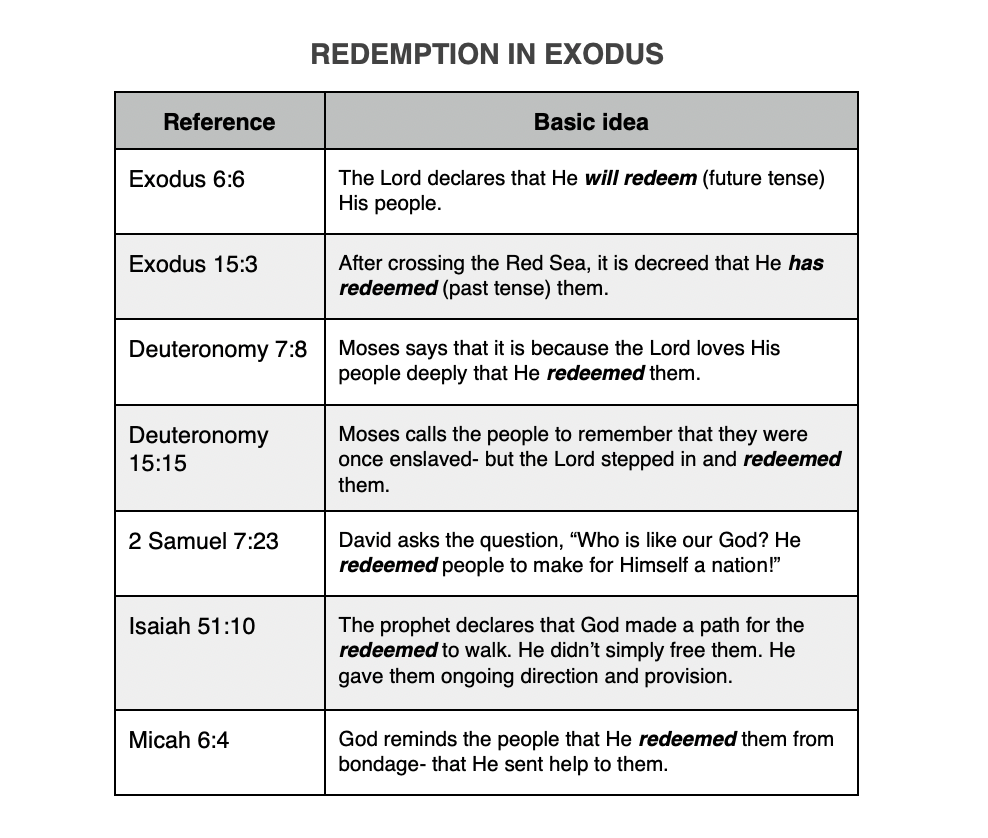 Hope for the future and in this life now

All too often, we focus simply on the future. The early church, though, often focused on the “here and now,” just like the Children of Israel did. In fact, Paul (a Jew, who saw himself and his ancestors in the Exodus story) had to go out of his way to emphasize to the early church that it was not only in this life that they had hope. They also had hope in the future (see 1 Corinthians 15:19). We tend to reverse it and place our hope in the future only, simply becoming content to “endure” the present as best we can.

In 1 Corinthians 15 Paul discusses the Resurrection in detail, as some members of the Church in Corinth were beginning to argue that there was no Resurrection— not for Jesus nor for people who already died.

In response to such thinking, Paul does two things.

First, he first provides them the proof that Jesus rose from the dead. Namely, He was seen by over 500 people whom His church members could go talk to- many of those eyewitnesses were still alive (15:6).

Second, he reminds them of their current situation if Jesus did not rise from the dead. He tells them—

In other words, the believers in Corinth had robust faith that the benefits of Jesus were for this life now. Sure, they had poor theology about what happens after you die, so Paul corrects that. But, they were certain that Jesus’ death— and their subsequent redemption— profoundly changed something in the present. Notice, though, Paul reminds them that we don’t have to “pick and choose.” The benefits of Jesus are for later and for now. It’s not an “either-or” scenario; it’s “both-and.”

Jesus obtained for us an eternal redemption (Hebrews 9:11-12), the freedom that He won for us begins right now, in this life— as well as in the future in Heaven.

In the previous chapter we looked at Psalm 103— the poem in which David outlines seven of the benefits Jesus provides. The following chart compares all seven areas David mentioned in Psalm 103 as being redeemed (far right column). Notice the relevance of each to the Israelites’ experience in Exodus (first column). 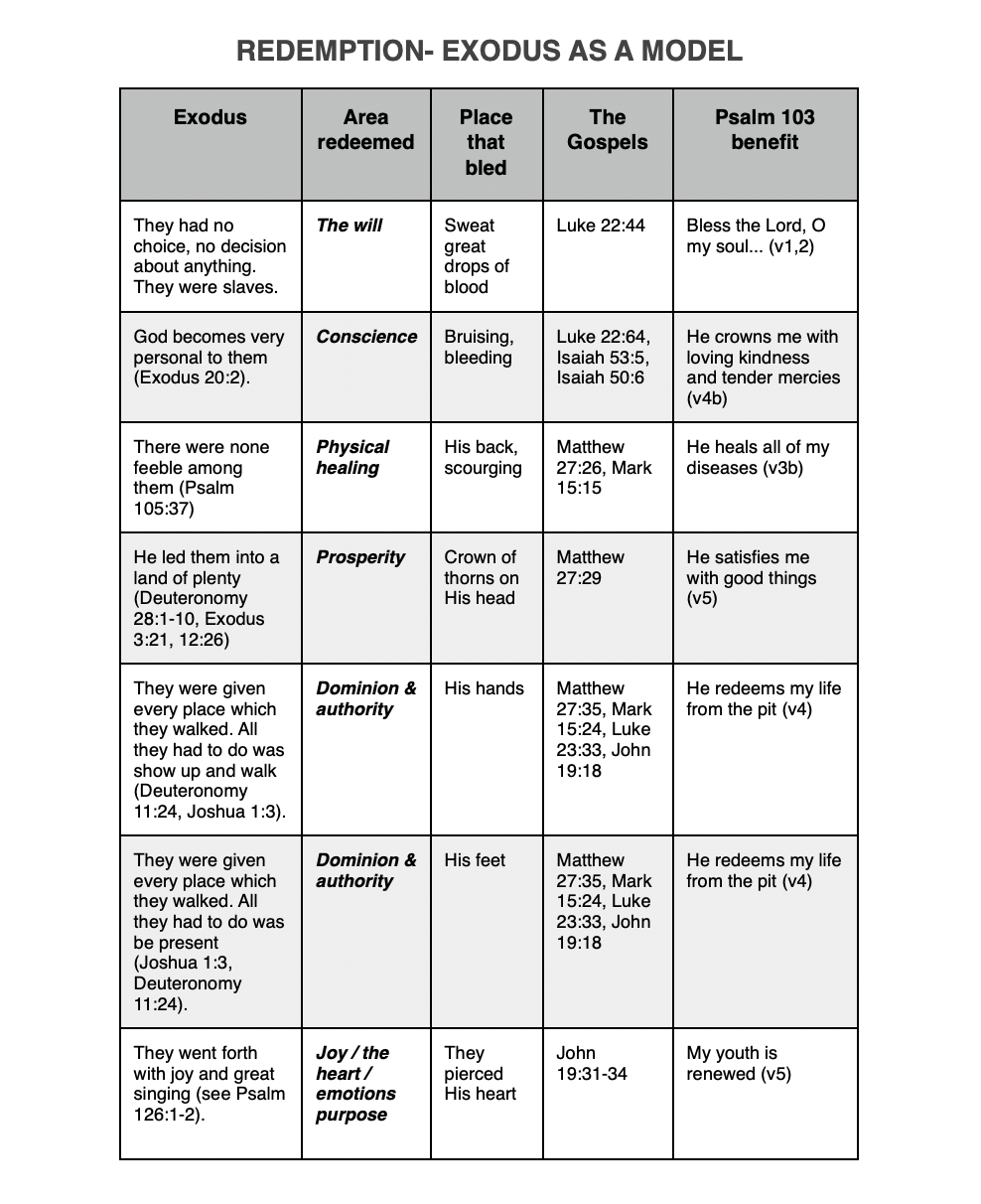 During the Exodus, the Israelites in Exodus did not wait until they died to experience freedom. They walked in it during their lifetime. This is why their story is important.

Notice the following chart. The verses each remind us that redemption has come through Jesus. 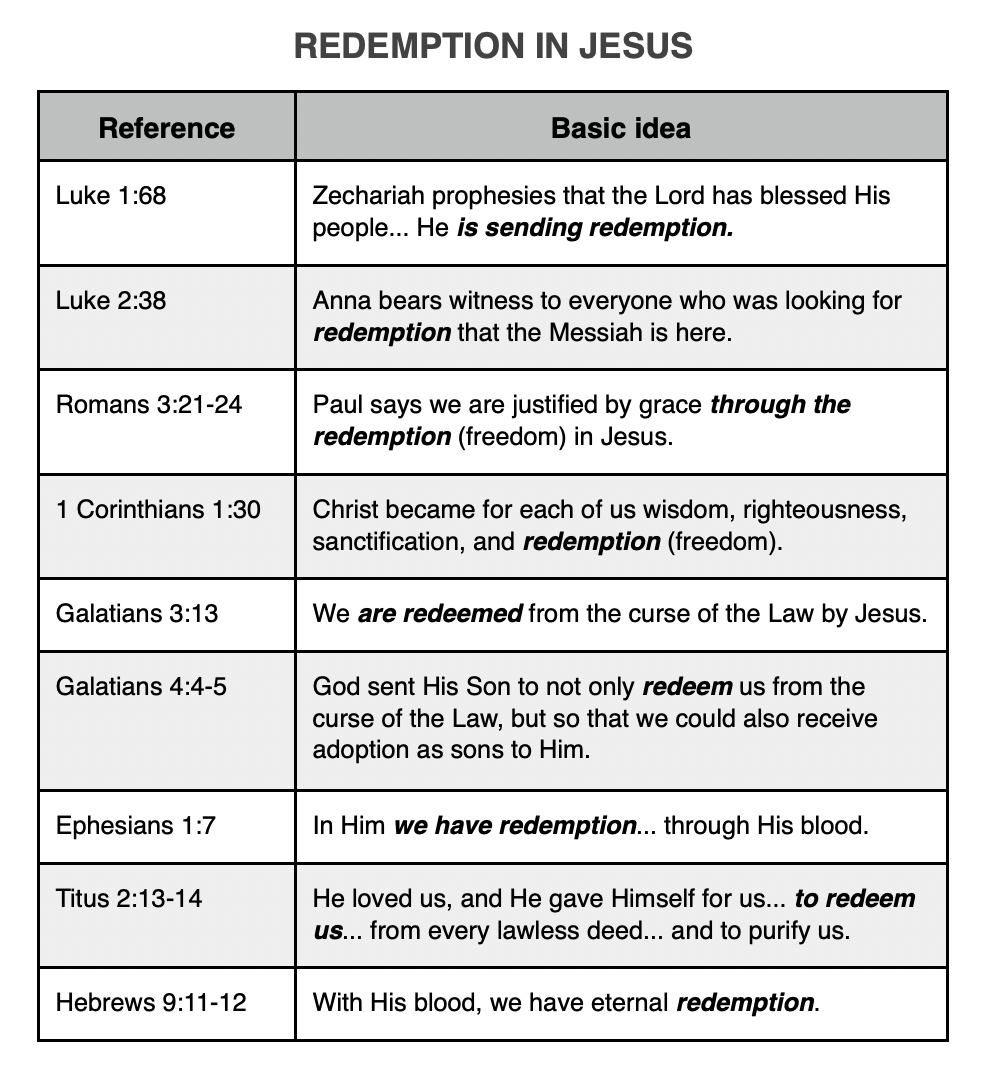 We tolerate a lot in this life that we were never designed to accept as the norm:

Doesn’t it seem odd that we often theologically crusade for the “right” to experience the spoils of the enemy instead of the promises of salvation?

Jesus worked in order to grant us life.

Freedom in the present.

The things that aren’t from Him aren’t for us- not in the next life nor in this one.