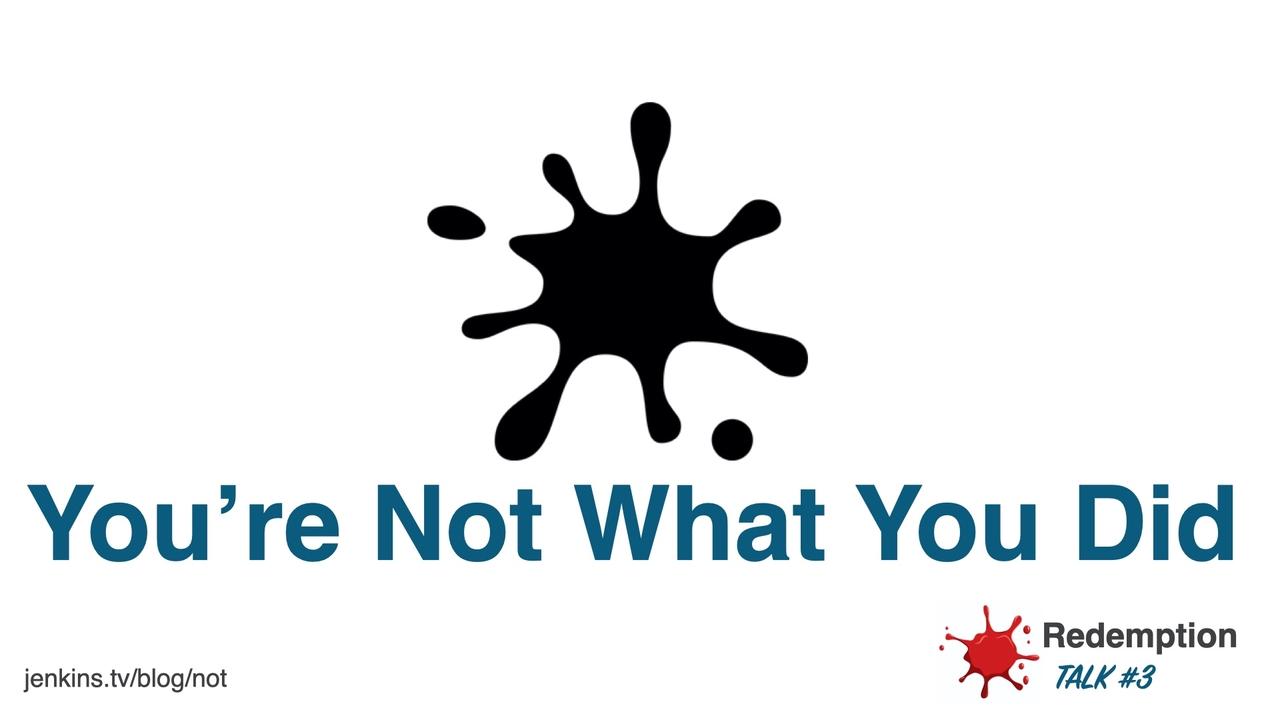 Podcast: You’re Not What You Did (Redemption #3)

Salvation is Jesus’ identity. It’s who He is.

Mary and Joseph were told to name their child Jesus for a specific reason. The angel told them, “You shall call His name Jesus, for He will save His people from their sins” (Matthew 1:21). The name Jesus, Yeshua, literally means “salvation.” That is, “Name the baby Salvation because He will save…”

Furthermore, as we saw in the previous chapters, Jesus came to save people in a far greater way than we may have thought. It’s important to remember that Jesus came to offer a complete salvation, a salvation that affects the entire person. He’s completely Savior, so He completely redeems.

Sin and sinners are connected

I grew up hearing this phrase- a lot: “Hate the sin, but love the sinner.”

The statement is well-intended, but there’s a glaring problem with it. Namely, sin doesn’t exist apart from people.

Try to say the phrase and insert actual sins in it. Like this-

You see, it’s hard. Almost impossible. In fact, that probably just made your stomach churn a bit.

You see, we don’t dissociate sins from people. Sin only exists because people sin. You can link every sin you see in the world back to a person. Period.

On some level, we understand this to be true. This is why many of us who’ve been entrenched in sin still identify ourselves with that sin even years after it’s over and we’re on the other side. We understand that sin is personal.

Again, sin only manifests when someone takes action on it. The problem is, well, we all take action and sin.

And then once we sin, we continue sinning- sinning so much so that, really, it becomes indistinguishable from our identity, as well.

In Jesus’ day, religious people believed certain people were unclean, based on their identity. Where did this “unclean” identity come from?

Well, people attributed it to the things they did.

The average zealot would not go near any of the following:

The devout steered clear of all these people (and more) because they believed that the actions people do aren't disconnected from who those people are.

Now, notice that some of those traits are things people did, things they had control over (i.e., collecting taxes, adultery). Other things weren’t things they did at all- they were conditions over which people had no control (i.e., leprosy, race).

Here’s where it gets odd. People in that culture believed other people received those traits because of something they- or even their parents did- to warrant that judgment. In other words, no calamity came upon anyone (they thought) which was undeserved. That's why Peter asked who sinned in order to cause the man who was blind from birth to be in that state (see John 9:1f.). It’s why Job’s friends- and even his wife- repeatedly insisted he must be hiding some significant and sinister sin.

But, for our purposes, remember, judgment has already happened. And some of the issues people want to judge others for (then and now) aren’t even sin issues.

What people do is a result of who they are- on the inside, not the outside. These two items- the “what” and the “who”- aren't disconnected. And the “what” is a always a result of the “who.” In the same way that Jesus saves because He’s Savior, sinners sin because… well… they're sinners.

If you have done any of the above...  you understand how sin can become part of someone’s identity. Shoot, you’ve identified them based on something that may or may not even be a sin.

But, in fairness to your assessment, the things they did emerged from who they are. In the same way that the salvific acts of Jesus arose from His identity, so also does sin emerge from the core. What we do is a result of who we are.

Are they always unclean?

Herein lies the tension. At some point, we must allow people to “move on.” There's got to be a moment when we look at some sort of evidence  and say, “Yes, things have changed. This is now a new person…”

And, “Their sin has been judged- enough is enough. Let’s move forward…”

And, are we certain that someone stuck in a lifestyle of sin (i.e., a prostitute) is the one sinning, or might she actually be a victim- might she be someone’s- get this- slave?

Even if these were all personal choices at some point in the past, is there anything the blood of Jesus not cover?

Is there a way to transform someone’s core identity?

The truth is that most prisoners aren’t violent and will fiercely guard your kids, over-protecting them (this was our experience, working with this group for almost a decade!). Most homeless people want help- despite the fact that (yes!) there are some who milk the system. Many strippers and prostitutes are stuck, trapped… and were tricked into their way of life.

I’m not excusing anyone’s actions. I’m simply observing that there’s usually more going on than we see in our simple “drive by” judgments. Most people are actually doing the best they can. And, whereas we like to judge sin as a “black and white” or “right and wrong” issue, most of life happens in varying shades of gray. In other words, you can’t understand anyone’s actions apart from knowing their story.

And many of these people- no, most of them- are just like you and me.

Ever been to an AA meeting?

Or- to use the language we learned in the previous chapter- “I've been set free, but I’m still a slave.”

(Don't know who those guys are? They’re two of the men who left Egypt in the Exodus. Then, they were the only two spies who believed Israel could conquer the giants in the Promised Land. Forty years later, they  got their chance to take that land.)

Now, I’m not picking on AA. Or NA. Or any other recovery group. I’m actually for anything that’s helping set people free. After all, it's all Jesus’ freedom. Plus, I’ve attended recovery groups before as a participant.

The bigger issue is that we do this with all kinds of sins, this labeling ourselves on the past rather than our potential. We do this because we understand that those sins were once part of our identity, the sins emerged from who we were.

You might understand it better like this: light overpowers darkness. And, it doesn’t struggle to do it, either. Whenever and wherever light appears, darkness simply disappears. Moreover, when it does, that darkness is actually transformed into something completely different.

(Just flip the light switch and the darkness instantly vanishes.)

Cleanness works the same way. Purity doesn’t struggle to cleanse that which is impure; renewal simply happens by virtue of the presence of something pure.

Again, people in Jesus’ day believed any contact with an unclean person actually defiled you (if you were clean). They understood that sin is connected to people- like I mentioned a few pages ago. Sin didn’t just  “exist” by itself- it didn’t back then nor does it now. Because it was so intertwined with a person’s identity, they believed that they should avoid people who participated in such sins.

For instance, when the “woman of the street” anointed Jesus feet, the Pharisees concluded Jesus must not be a prophet. No man of God would allow an unclean person that close, because the sinner would “taint” him (see Luke 7:39). I mean, there she was, anointing His feet with costly essential oils. And, of course, everyone at the dinner party- which she interrupted, uninvited- knew exactly how she earned the money for that.

The dinner host muttered to himself, “If this man were a prophet, he would have know who and what sort of woman this is who is touching Him, for she is a sinner” (Luke 7:39 ESV).

That was the way all of them thought.

Have you noticed, though, how often Jesus reached out to these people...?

The ones people said were unclean?

It’s almost as if He intentionally went out of His regular routine to pull those people close.

Furthermore, they were the ones who were actually the most comfortable around Him. They gravitated to Him, knowing they’d be accepted.

When people who had been shunned for being unclean came to Him, He often reached out and touched them- even breaking the religious “rules” in doing so, too! The more shunned you’d been in the world, the more secure you were likely to feel with Jesus.

For instance, even though Jesus often healed people with just a word… even though Jesus even performed “long distance” miracles, literally calling forth healing from one village or town to the next (i.e., Matthew 8:13, Matthew 15:28), He always touched lepers.

Because they had been ostracized. They’d been judged so harshly that no one would even come close to them. They’d been denied human interaction.

They had been judged.

(And people weren’t designed to carry the weight of judgment. No one is. We can’t carry it. That’s why Jesus took it. We were designed for hope, redemption, and freedom!)

The first instance in which Jesus touched a leper is Mark 1:40. It wasn’t an accidental touch, either. The man expressed faith that Jesus could heal- if He was willing. In response, Jesus deliberately reached out to the leper, as if to say, “Here… your uncleanness won’t make me unclean. My cleanness will cleanse you, though…”

Then, Jesus instructed the former leper, “Don’t tell anyone… go show yourself to the high priest, though, and offer the sacrifice for cleansing” (Mark 1:44).

The high priest is the one, according to Leviticus 14, who could verify the leper had been healed- that they had a new identity. Then, he would be welcomed into the community. Everyone would accept him as clean! Jesus healed the man, then, and restored his relationships.

However, overcome with joy, the former leper freely spread the news of his healing. That is, he didn’t just say to the priest, “Hey, examine me! Look. I’m healed!” Rather, he declared, “Jesus touched me!”

I know- it would be hard not to share that, right?!

According to Leviticus 13-14, Jesus was now ceremonially “unclean” too and had to leave the town (and presumably live among the lepers, as well as everyone else who’d been excluded from the local faith community)- which is what He did. Per the Law, He would need to go show Himself to the priest and verify that He was clean.  I’m sure you see the irony here.

Mark writes, “Jesus could no longer openly enter a town, but was out in desolate places” (1:45).  The crowd (apparently realizing they were all unclean, too- or not caring when they saw such grace in action) flocked to these remote areas away from town with Him (see Mark 1:45).

Again, it’s as if He says, “Hey, your uncleanness won’t make Me unclean. My wholeness will clean you…”

Then- “Even if others don’t see it that way, I’m willing to take your stigma on myself. I can take the label. Because who you are- who you really are- is greater than any other thing that might define you.”

Or, to say it another way, “I see who I really created you to be. Now, it’s your time to shine.”