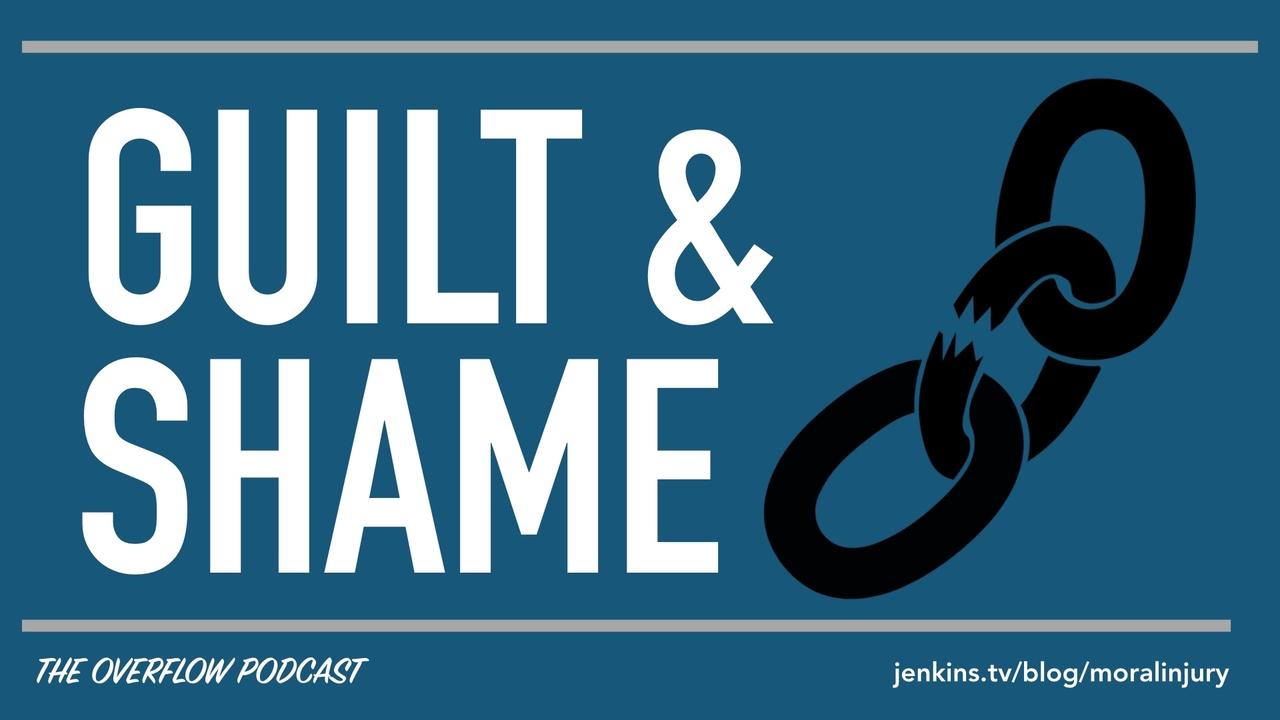 Turns out, if you treat someone for PTSD yet they have Moral Injury, the treatment plan won’t work. It will be ineffective.

Just like this- if you treat someone for a broken leg but they really have a broken arm, your treatment will also be ineffective.

We’ve got to address the actual issue, the goal (again) being to walk in total wholeness.

In this talk I cover four main ideas that will help you understand and then seek help- or help others- struggling with Moral Injury. In my thinking, the more I study this and interact with others in the sphere of emotional health, I believe this is actually a BIGGER issue than PTSD. Moral Injury, as you’ll see, goes to the root of who we are, striking at the heart of our identity.

Let’s roll through the info…

#1- Signs are not about signs themselves- they point to something we need to know.

If you stumbled approached a field and saw a sign that read “Danger, Mines”- a common sign throughout the world- you would have a few options.

Depending on what was on the other side of the mine field, you might choose a different one of those options. There’s one thing you wouldn’t do, however: you would never think that the sign was about the sign, that it was simply pointing to itself. Signs always direct us outside of themselves, to a bigger reality. 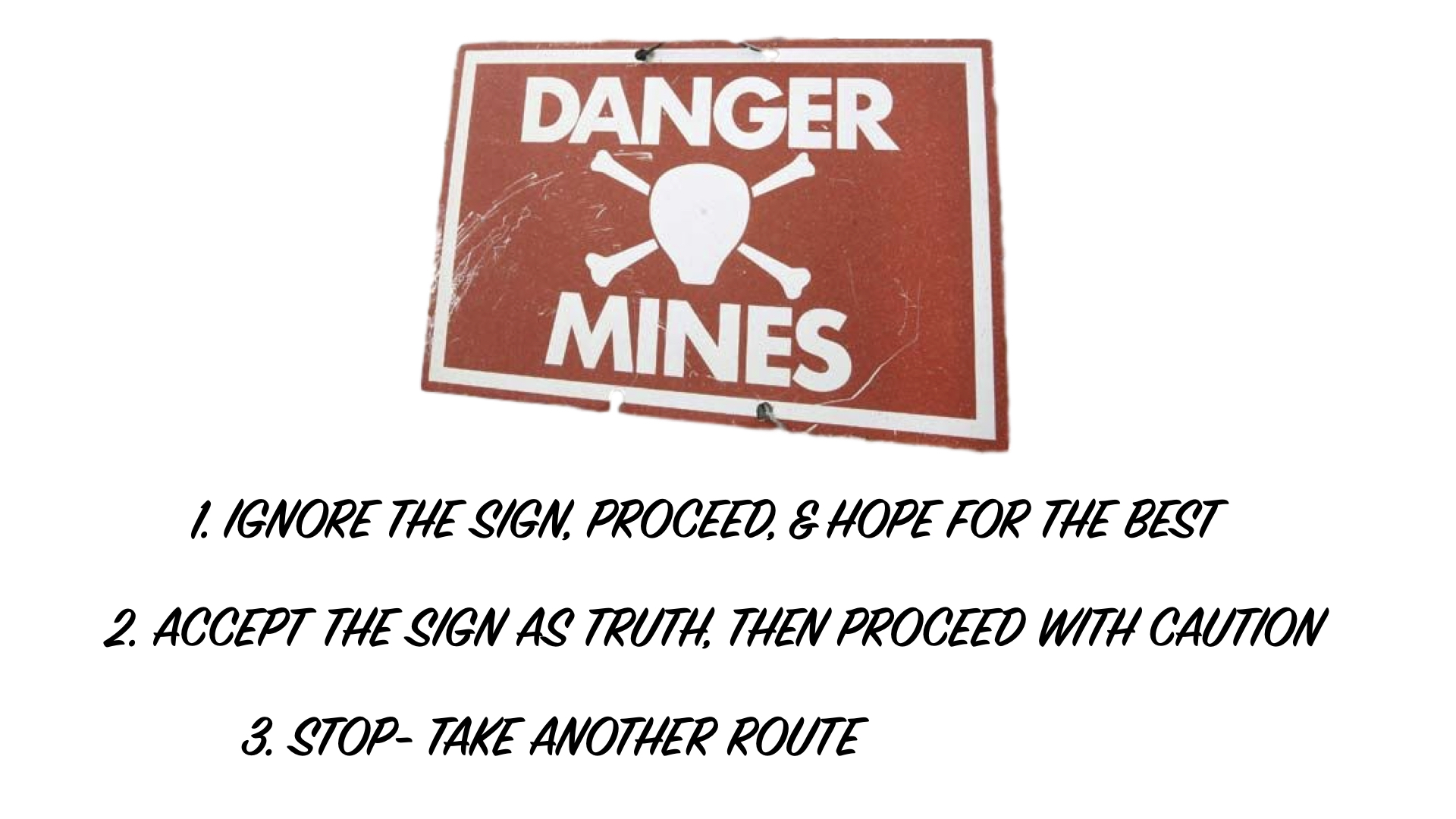 Our bodies give us signs when something is wrong with them. For instance, pain after a hard fall alerts us that we may have broken a bone. Or a headache communicates that we may be dehydrated. A hot sensation when we touch a surface lets us know to pull away quickly, so we don’t burn ourselves and create irreparable damage.

In previous talks we discussed how our emotions do the same thing. They communicate that something is wrong, something that we need to address. We even learned that there aren’t “good” feelings and “bad” feeling. Rather, they’re all meant to serve us in some way, so that we might walk in wholeness.

Turns out, there are signs for our soul, as well…

Signs that may, at first, make us uncomfortable.

#2- You’re not flawed- the internal unrest you feel is a natural response to the experience you encountered.

We receive messages about soul wounds from our conscience.

the sense or consciousness of the moral goodness or blameworthiness of one's own conduct, intentions, or character together with a feeling of obligation to do right or be good. 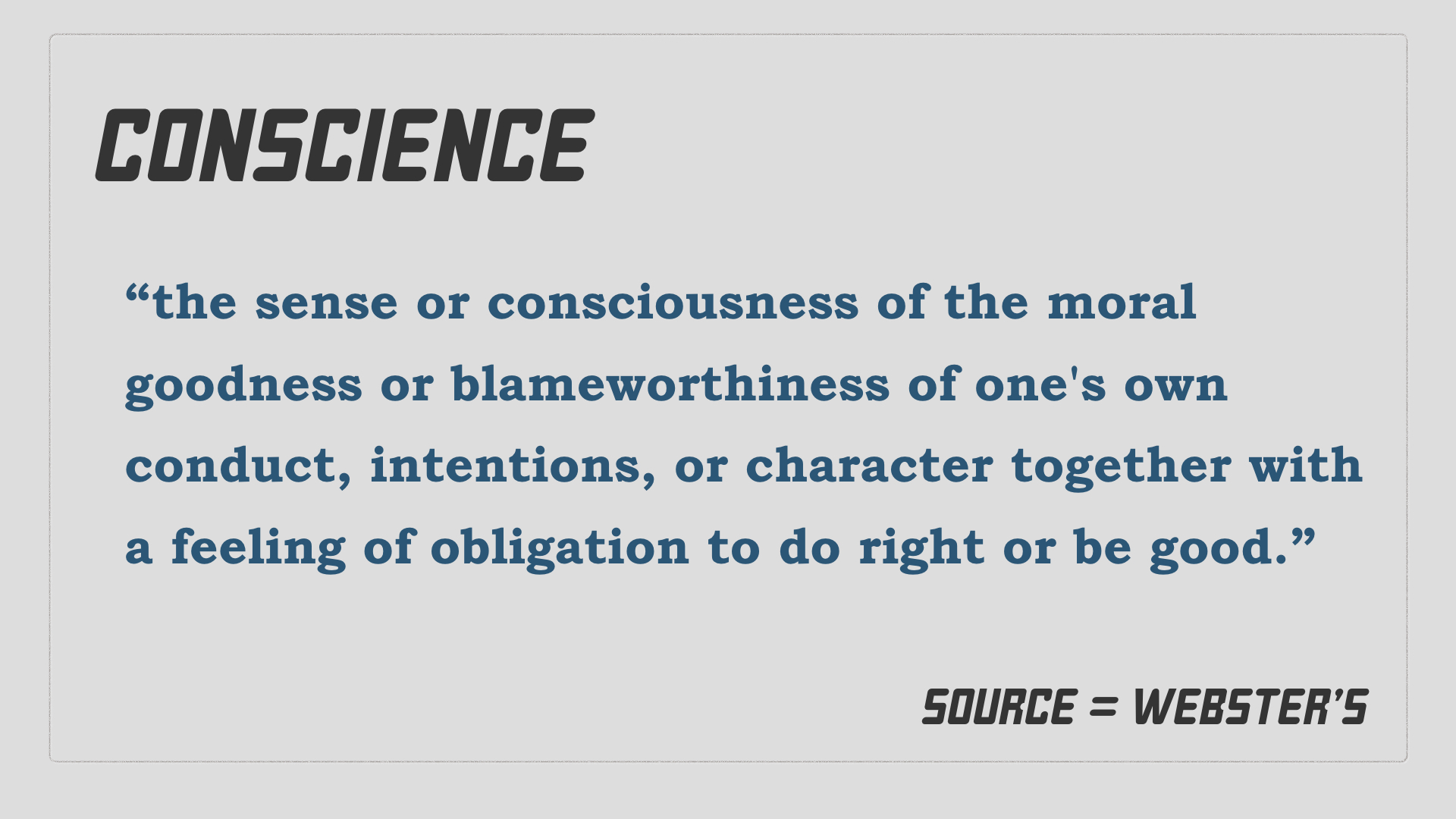 First, our conscience communicates both good and bad things, that is, it tells us about things that are right and things that are wrong. Webster’s used the term “goodness” and “blameworthiness” to denote this.

Second, our conscience communicates to us about what we do (conduct), things we think about doing (intentions), as well as the general trajectory life is taking (character). Therefore, our conscience might communicate with us before we do something (in anticipation of it), after we do (as a look back to confirm we did well or that we did wrong), or even during the event in question.

Third, finally, our conscience has a bent towards doing right.

Take a look at the graphic below. You’ve probably seen some sort of version of this in cartoons before. 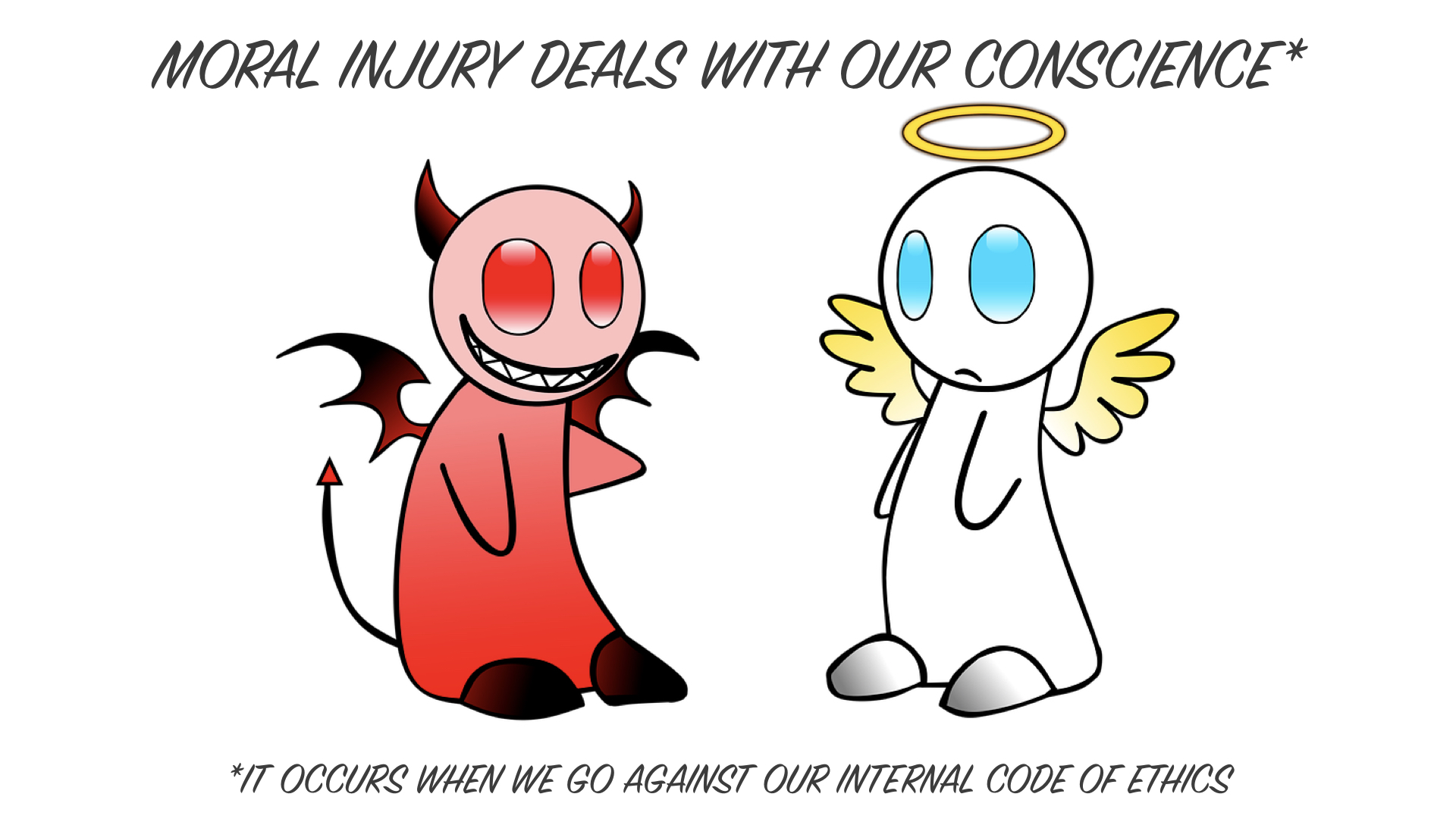 The cartoon communicates deep truth. Notably, the moral compass of what’s accepted as right and what’s believed to be wrong is fairly consistent among most people. In fact, outliers are said to be deviants.

C.S. Lewis, the famed author of the The Chronicles of Narnia, noted that across all cultures, all languages, in all time periods, there seemed to be a specific set of rights and wrongs.

Lewis says this is because we all have a moral compass inside of us, one that transcends who we are and is rooted in the Creator’s design (see his book Mere Christianity for more).

Whereas he was a Christian author later in life, he began his career as an atheist and even communicated some of these ideas then. Again, this shows that the moral compass is rather consistent- and isn’t just religiously based (though, I would say, we have a natural drive to connect with our Creator because of the Imago Dei in each of us).

In Romans 1, Paul writes about the same issue. He says that even if we’ve never seen religious laws, we have a “law” on our heart, a conscience, that bears witness to us when we walk uprightly and when we don’t.

When that conscience is violated, Moral Injury (MI) occurs.

Dr. Rita Brock, a professional who has done extensive work with soldiers, applies MI to war.

Moral Injury results when soldiers violate their core moral beliefs, and in evaluating their behavior negatively, they feel they no longer live in a reliable, meaningful world and can no longer be regarded as decent human beings. They may feel this even if what they did was warranted and unavoidable.

Here’s what she means-

The consequences of violating one’s conscience, even if the act was unavoidable or seemed right at the time, can be devastating.

(Some theologians refer to these as sins of commission- you committed a wrong act- AND sins of omission, you omitted doing a good deed.)

When the conscience is violated, nothing is “wrong” with us. In fact, it is our soul’s way of communicating to us….

Now, you may see similar “symptoms” on the surface between PTSD and Moral Injury. Notice the graphic below. 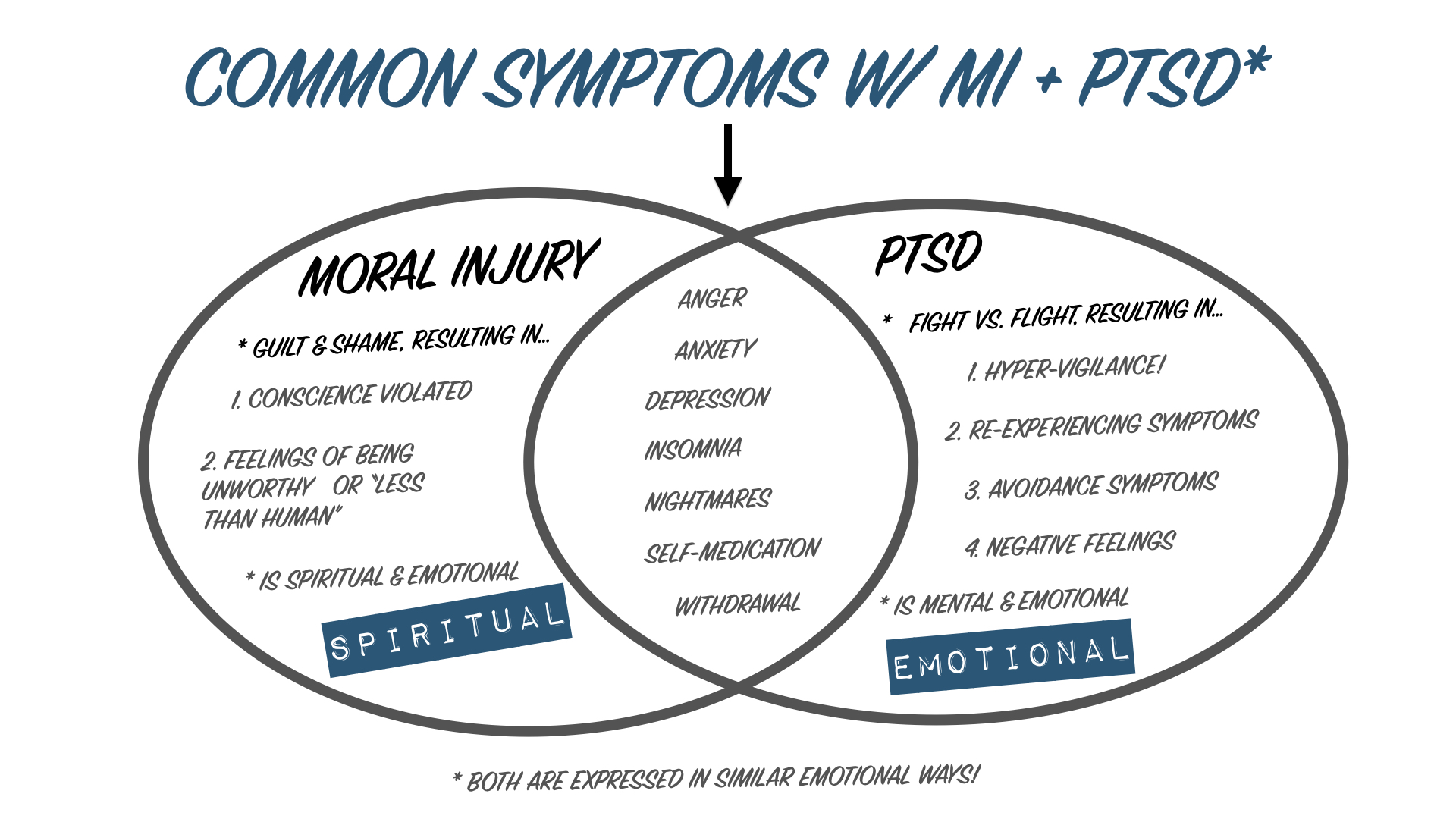 But, whereas PTSD results in a “fight or flight” response, MI is different. When you feel MI, your soul communicates with guilt and shame.

(This is why MI is often misdiagnosed at PTSD- on the surface they may look similar.) 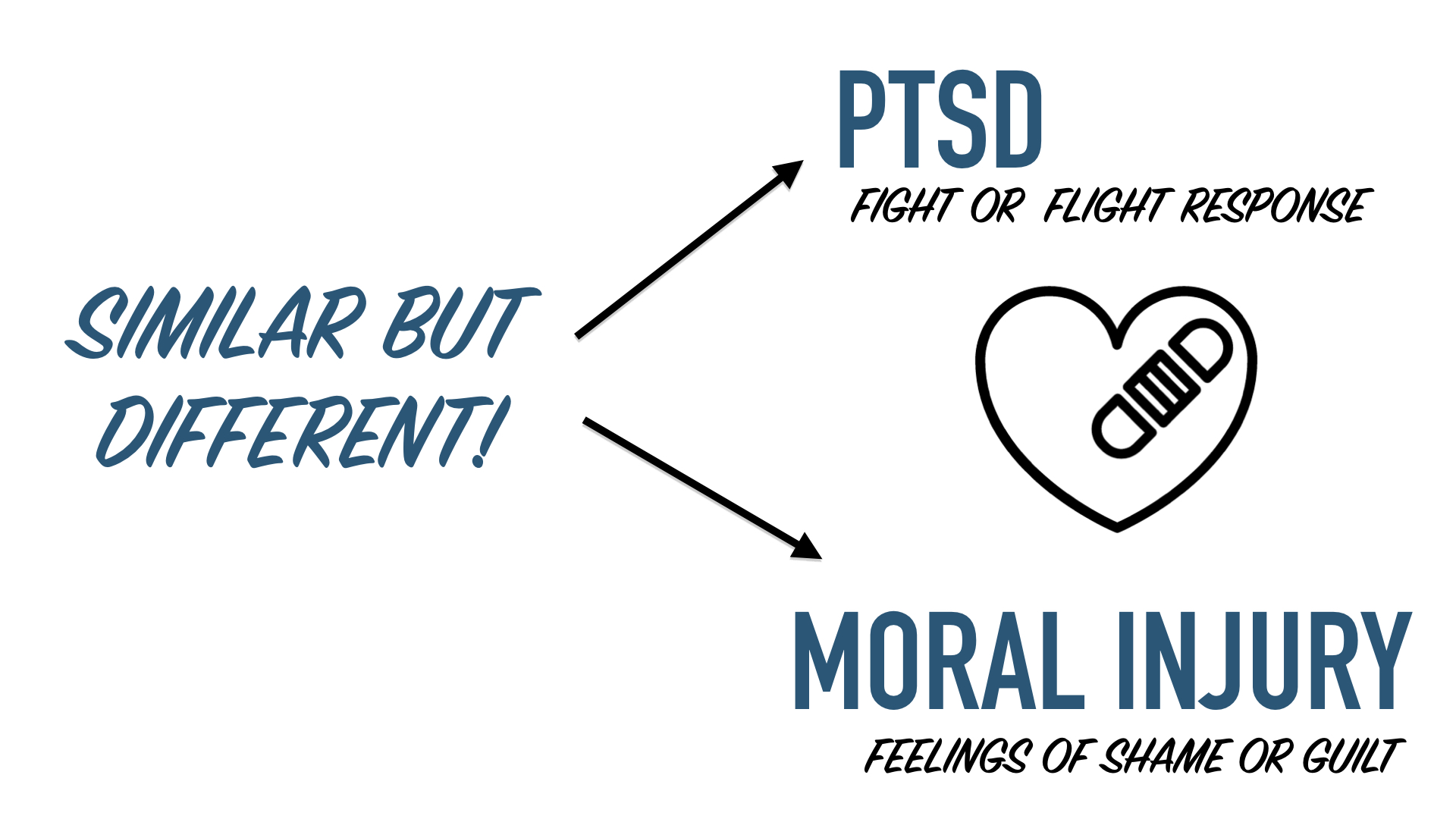 Notice the picture here. MI happens when, first of all, your conscience is violated. And, as a result, you feel worthless. In fact, in some instances you may even feel less than human.

You’ve probably heard the saying, "Wherever you go, there you are.” When the issue is “in you” (i.e., your conscience), you can’t fight it or run from it. It remains present with you.

Earlier in the this series of talks we talked about perceptions and reality- and how PTSD (or any emotional trauma) affects both our mindset and our emotions. We think one thing is happening in the present (based on our past experience), so we sometimes react inappropriately in the moment. 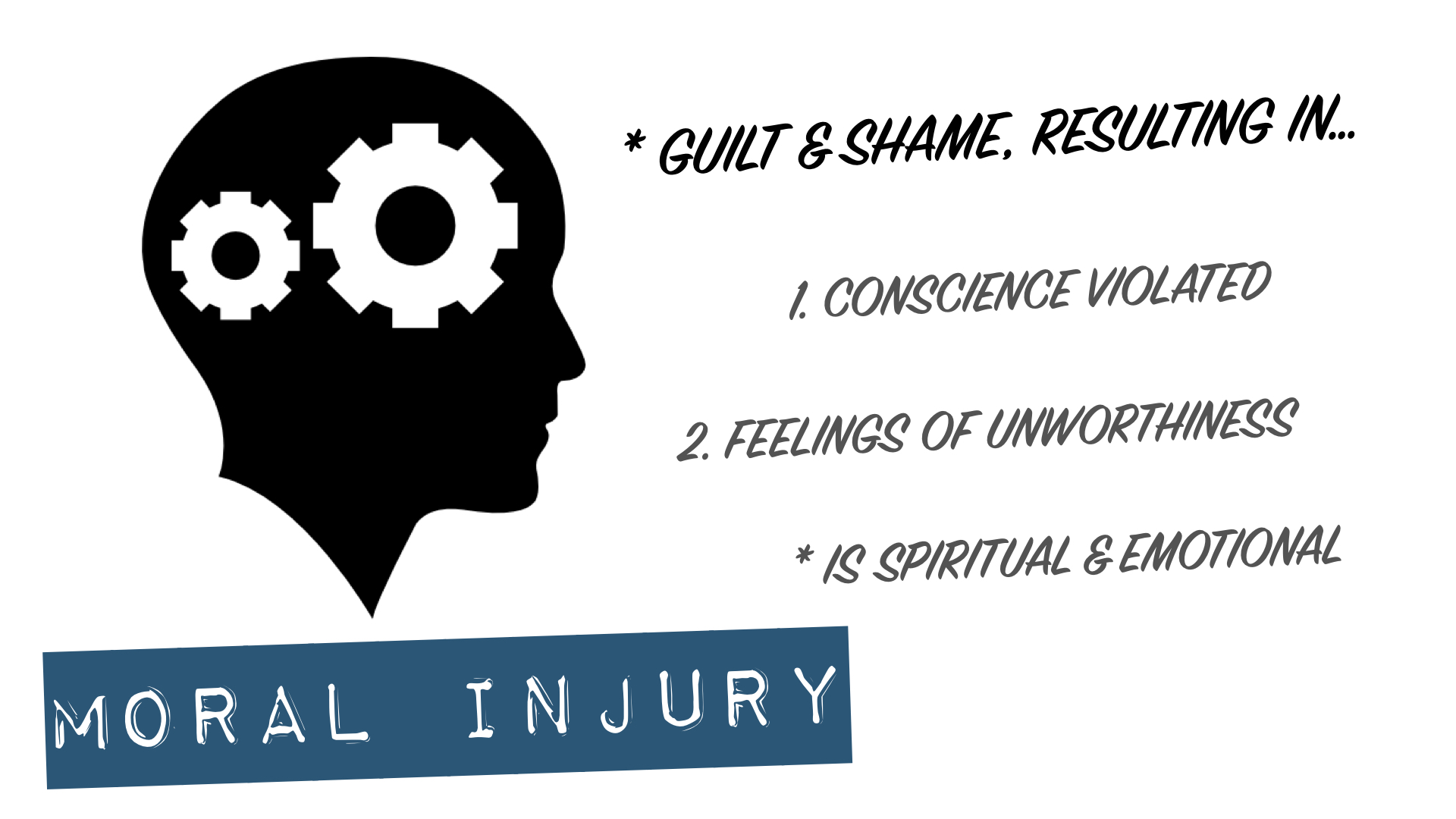 Again, MI deals with guilt and shame. Oddly enough, we’re able to separate guilt (what we do) and shame (who we are). The two, though related, are different…

Here’s what I mean…

Whereas guilt focuses on actions (what we do), shame declares identity (who we are). People can repent of actions, but they can’t repent of their identity.

An identity change requires we do more than rewrite the script. To change an identity we must re-cast the character. Or, to say it another way, we must address the root causes rather than looking at the fruit symptoms. 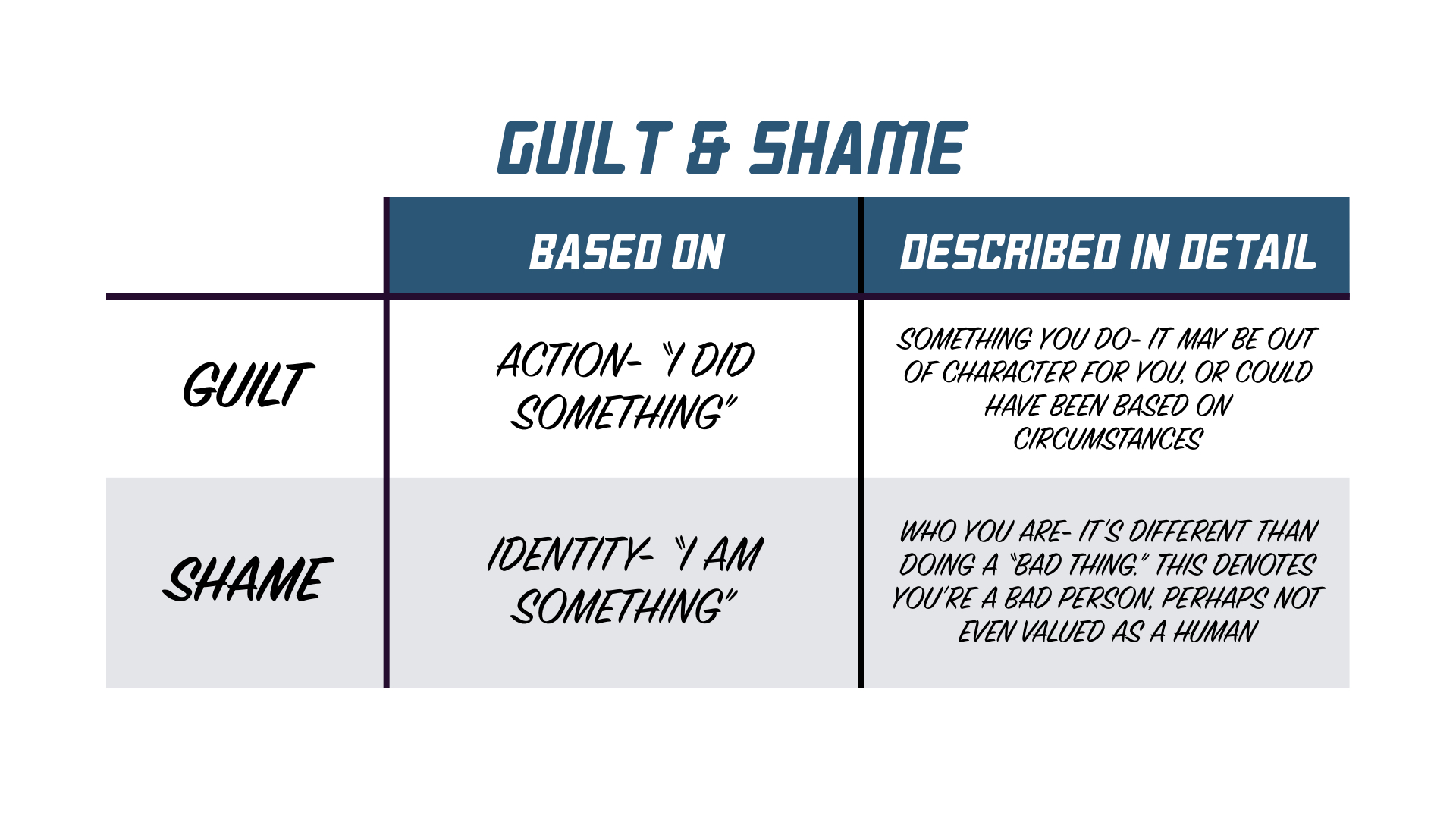 Here’s the strange thing about MI: everywhere I talk about it, as many people resonate with it as they do PTSD. By that, I mean this:

Here’s the kicker, though: no one can currently be diagnosed with MI. It’s not included in the DSM-5, which provides the basis for receiving any diagnosis.

But then again, remember, our goal isn’t to get diagnosed (nor is it to avoid a diagnosis). Our goal is to walk in total health. That is, we want to define where we are, so we can walk into who we’re designed to be.

#4- Experts of multiple diverse backgrounds agree on the “cure.”

It seems like a simple answer, but the data is consistent.

The all-too-uncommon cure for MI is receiving forgiveness from someone the wounded person believes has the moral authority to grant that forgiveness.

They need to hear the words, “You’re forgiven. You’re accepted. It’s the past.”

Some even need to hear, “I’m proud of the person you are.”

Who has such authority to gift these words?

It depends on the person who needs it. It might be:

It simply must be someone they believe, sense, or feel has the authority to impart forgiveness. It is at this point the healing process often begins.

And, if you come from a faith tradition, you might have just winced a bit when I suggested that coaches and soldiers and teachers and anyone else can dispense forgiveness. I know, it sounds strange.

During Jesus’ ministry, the Pharisees regularly scolded Him for forgiving people. In response, at the end of His time on earth, Jesus did something incredibly interesting. We find it in John 20.

After they discovered the empty tomb, the disciples hid in the Upper Room- afraid they might be killed, too. Jesus appeared to them behind the locked doors, showing that our emotional duress (i.e., even fear itself) doesn’t hinder Him from finding us. John tells us He breathed the Holy Spirit upon them.

Then, He declared, “If you forgive the sins of any, they are forgiven them; if you withhold forgiveness from any, it is withheld” (John 20:23 ESV).

Perhaps this is why Jesus said that “all men will know you are My disciples… by the way you love one another” (see John 13:34-35). Love communicates something nothing else can. Love is the greatest revelation possible to an unbelieving or desperately-wanting-to-believe world. And love creates sacred space where much-needed ministry happens.

(And, remember, sacred and secular professionals agree alike that freedom is found in forgiveness.) 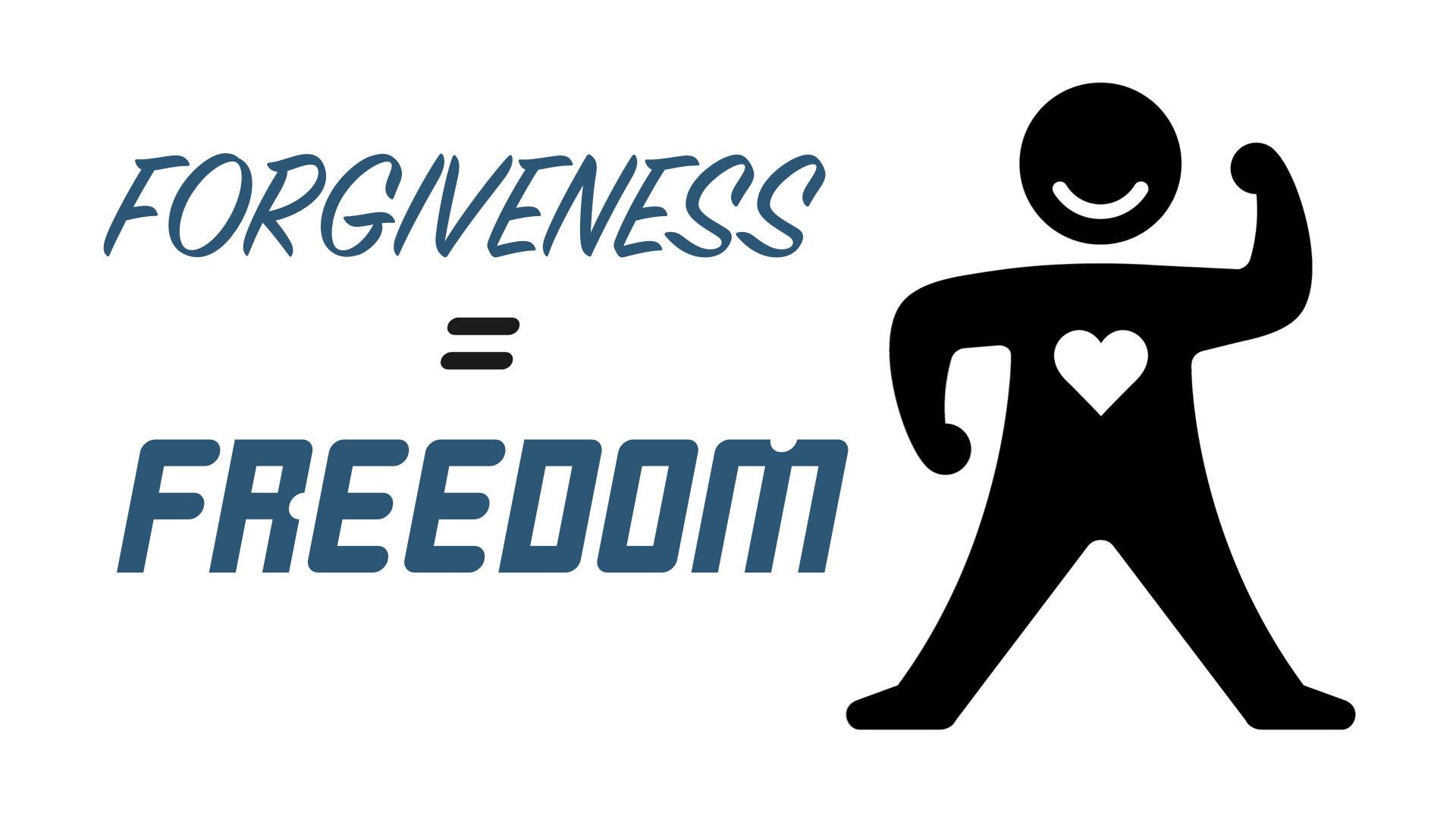 If you’re not… give perfect love…

If you’re a victim of MI, let me remind you that you can always find a story to back your perception that you’ll be rejected. I’ve learned that some of the biggest offenders of loving people imperfectly are the most oblivious to it, and even use pop psychology and well-worn phrases that sound more cliché than real. But that’s, not the norm.

Label it. Light it up. And let it go…