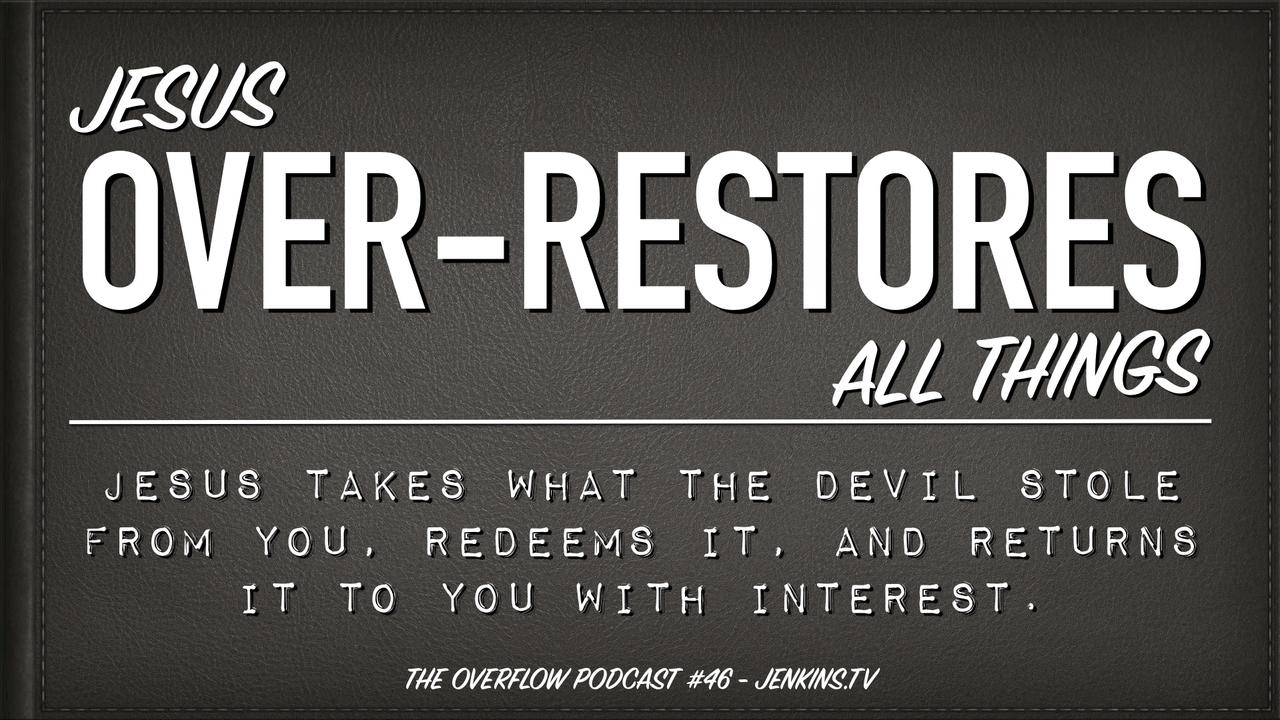 Grace doesn't just erase your past mistakes and give you a clean slate. It does far more. Jesus takes what the devil stole, redeems it, and then returns it to you with interest.

The author of Hebrews tells us something strange. He says that the blood of Jesus speaks a better word on our behalf, now, than the blood of Abel did in the Old Testament (see Hebrews 12:24).

I was always thought- and actually taught- that since Abel died when his brother Cain killed him, his blood cried out for vengeance and justice (see Genesis 4:11-12). Of course, the flip side of this was that Jesus’ blood, on the other hand, cries out for mercy and freedom!

However, notice the following chain of events, straight from Cain and Abel’s story-

Is sin really a problem for God?

This suggests that Cain is actually a friend of God’s. And, just as God sought Cain’s father (Adam) after the first sin in Eden, now God seeks him- after the sin. Remember, Adam and Eve weren’t “kicked out” of the  Garden because the Lord could not or would not fellowship with them. They were removed so that they would not eat of the Tree of Life and live forever in a state of sin (Genesis 3:22-23).

Your sin is not an issue for God, any more than the skin of a leper was an issue that prevented Jesus from touching them.

It’s not as if Jesus saw a leper and thought, “Don’t come near Me... Your dirty... you’ll make Me unclean.”

In the same way, Jesus doesn't look at someone trudging through sin and ponder, “Hmmm… this might taint me…” 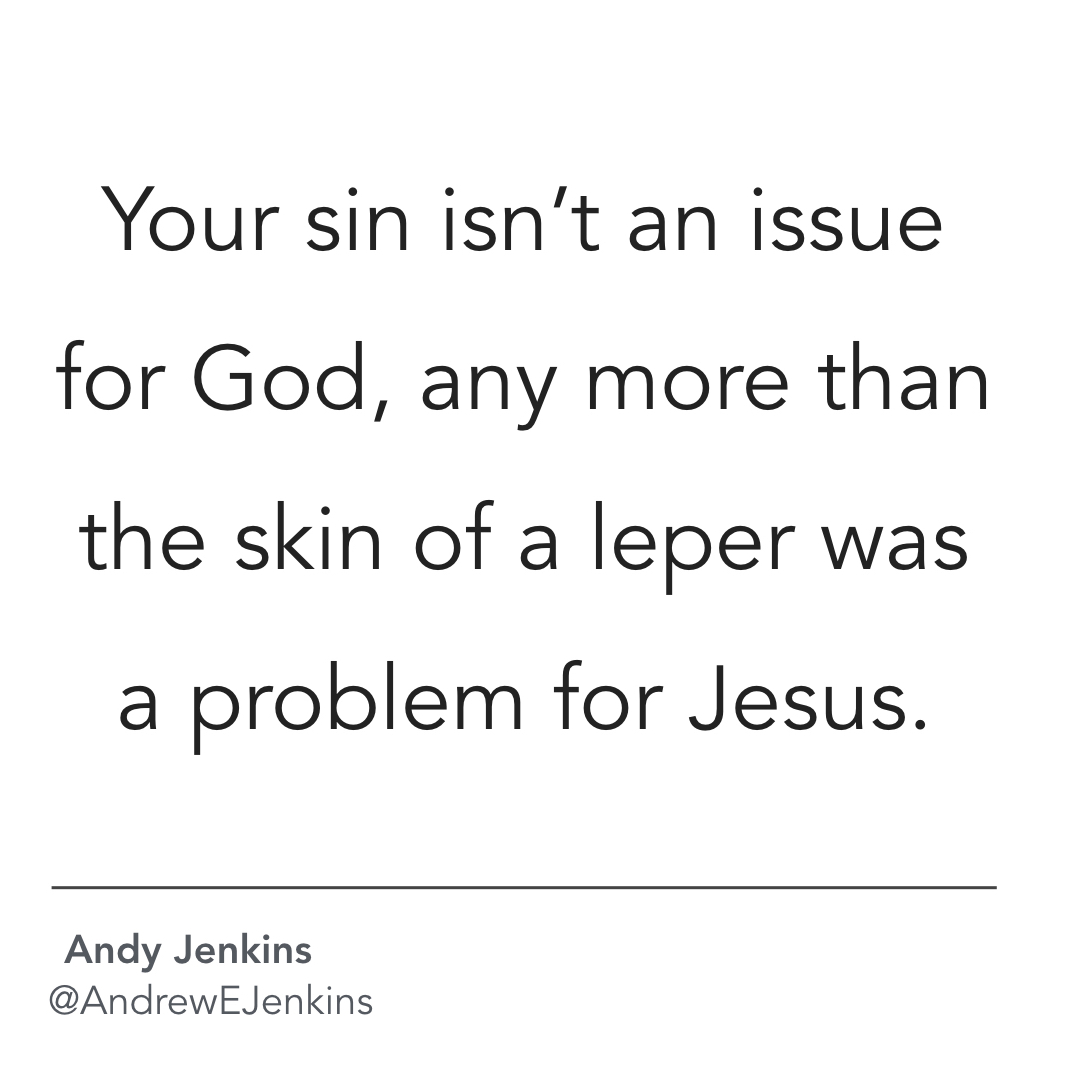 The voice Cain hears after the murder seems to be the audible voice of God (4:8-9). Even though he’s that intimate with God, though, we read something odd happens.

The author of Genesis explains that “Cain went out from the presence of the Lord” (4:11f.)- not vice versa! He left God; God didn’t leave him! The inference is that the Lord still longed to walk with him, delivering much needed grace.

God even marked him afterwards, protecting Cain from harm. God vowed to bring vengeance on others who might try to harm him. Even after his sin, God was for him, protecting him with an “If you mess with him you mess with me” position.

Here's my conclusion-  It seems to me that blood of Abel cried out for mercy- because that is what God offered. If one of the most heinous acts a brother can do (murdering his brother!) generates mercy, how much more will the greatest act one can do (“No greater love has one than this…”) create a ripple effect of grace (John 15:13)!?

In other words, if the blood of Abel spoke a good word for his brother, how much greater of a word does the blood of Jesus speak?

How much more will the blood of Jesus save?!

I have a good friend that worked on staff with me at a nonprofit I told you about the intro. We served together for a few years, leading a reentry and recovery program that helped men, women, and families coming from prison, jail, addictions, human trafficking, and homelessness. We housed upwards of 150 people at a time in a large central facility from which the ministry was run.

For a season, Rob was the only case manager we had. Then he was the program director. Then he oversaw a successful construction business we created to hire residents and help them gain valuable work experience, building a resume in the process.

Rob was there from (almost) the very beginning.

I met him about six months after we began our ministry in the inner city, He’d walked a rough road (read: a big pit), had been restored, and was ready to bless others.

Rob’s father approached his own pastor one day, explaining, “My son has just come through his addiction... he’s been clean for over a year now... he wants to help men who have been addicted restore their lives...”

The pastor- a mentor of mine- referred them to me.

The next day Rob called, and we spoke on the phone for about an hour. Two days later we met in person. Three days later he volunteered at the center, working long hours side-by-side with our team. Less than sixty days from when I first met him, we had a staff position open and I offered it to him. It was then that I began learning about another facet of redemption.

Every few days, Rob called or texted, “I’ve got to come in late tomorrow.”

He was honest about why. When his “number” came up, legal demands required him to drive 30 miles from downtown Birmingham to Shelby County for a urinalysis drug test. He was in drug court.

Turns out, Rob used to live in a car he parked in a nearby Super Target parking lot. His drug problem had taken everything from him.

So, he and his girlfriend at the time (who later came on staff with us) climbed into a jet-black Mitsubishi Eclipse each at night in the parking lot.

“We reclined the seats all the way back,” Rob recalls,  “and then pulled piles of clothes on top of us, sleeping under our load of laundry.”

Whenever security guards checked the vehicle (which happened nightly), they shined a flash light through the tinted windows only to see all that you could see… a pile of clothes. The car looked like nothing more than something left for the evening by a shopper who accidentally left the lights on and drained the battery. Except this car was in the same lot every night.

(Due to high turnover on night watch, it took a few months for security detail to catch on. After a few months, though, one of the officers clued in and had the car towed. With that, Rob began living out of his old truck until he was able to retrieve the car from impound.)

I know what you’re thinking: How did they take baths? Where did they brush their teeth? How did they do their laundry and not stink?

Turns out, a well-to-do real estate developer saw that Target shopping strip and its prime location as place that people might like to live. So, while bulldozers leveled the mountain that became Rob’s parking lot, he erected a sprawling complex of a few hundred apartments right across the street. One of Rob’s friends signed a lease and moved in…

Rob knew his pal’s schedule. Whenever that friend went to work and the coast was clear for a few hours, he’d sneak break in.

“I knew where the key was hidden,” Rob told me. “So, it was kinda one of those grey areas.” Then laughing, he confessed. “No. No shade of grey there… I was breaking and entering…”

Rob told me about some of the strange encounters that happened…

“One night, he was gone. I snuck in to take a shower. I was getting dressed and I heard him at the front door. He came home too early!”

“I rushed into the spare bedroom, dove into the closet, and hid. It was cold outside, so I just stayed there the entire night.” Then- “I couldn’t leave until the next morning after he’d gone to work. I had to use the bathroom… and was forced to hold it all night! It was miserable!”

As I listened to Rob recount this story, I had this sinking feeling that someone could have, at any given point, been in one of my closets and I wouldn’t have known. Yeah, it would have been a friend. I would have been safe. But, still...

When Rob got busted and had to start attending drug court each week, he got clean. He quit, “cold turkey.” His dad shepherded him through recovery, hiring him to work for his own construction company (and managing his money until he was sober enough to have a pocket full). A year later, he was with me. This is when it dawned on me that the Lord pulled him out of the pit and gave him a “do over.”

Like David says would happen, Rob found Jesus at the bottom of the pit. Jesus had been waiting there the entire time.

(Go to the previous episode for more on the pit: https://www.overflowfaith.com/blog/45 )

The first time I taught this information about “being redeemed from the pit” one of those Thursday nights at the Birmingham Dream Center a few years ago when we had a “small group” with over 200 people attending, I asked Rob if I could share his story.

“We’re talking to a lot of guys who are dealing with addiction right now,” I told him. “I’d love to share the story of someone who has lived what many of them are living right now.”

Rob’s reply was classic. And theologically stronger than anything I would have said up to that point.

“Sure,” he told me. “Tell them anything you want to tell them that I’ve shared with you. But let people know that He often makes the ‘do over’ better than the original, somehow. It makes no sense, but He does.”

Then- “Jesus takes what the devil stole, redeems it, and then returns it to you with interest.” 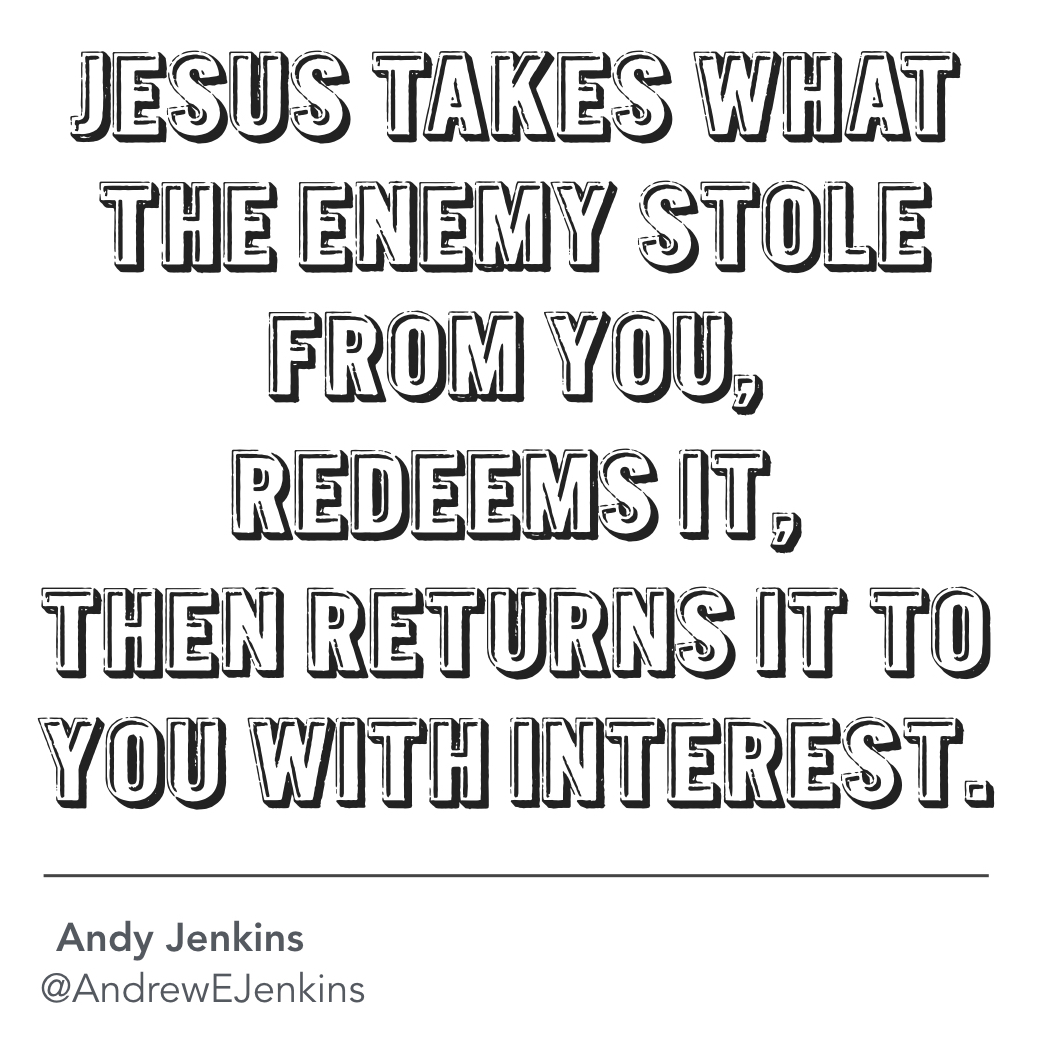 Remember the blood of Abel? Yeah, it cried out for mercy.

The blood of Jesus? The blood of Jesus doesn’t just cry out for mercy and then forgive. Nor does it just forget. It seats you at the right hand of the Father, sandwiched between your Papa and Christ Himself.

When Rob was running the construction company for us, we used to grab lunch once a week. It was our way of getting out of the grind of the office environment to catch up on different projects we had going. Sometimes, we sat in a restaurant that overlooked his former parking lot.

“I was doing construction before my addiction made me hit rock bottom and I lost everything,” he reflected one day. “But I wasn’t doing it for  ministry. And I wasn’t doing it to help men restore and rebuild their lives…”

He then added a unique insight: “So, I figure I got my life back... but, with the re-do I got a better calling…”

In the same way that Rahab’s redemption became the salvation of her family, Rob’s restoration became the deliverance for men and women he didn’t yet even know…

By the way, he’s married to the lady who used to live with him in the back of the car. They have a home of their own (which he paid for with cash), two dogs, and a camouflage truck. No kidding.

Like a healer + a physician- not a lawyer or judge

Legalists are pretty clear that God views sin as right vs. wrong.

Makes sense on the surface. We have to have rules to get along, right?

Maybe not so fast…

“Those who are well have not need of a physician, right?”

He said that in response to Pharisees (read: moralists) who wondered WHY He spent so much time with those who were obviously struggling to simply make life work… 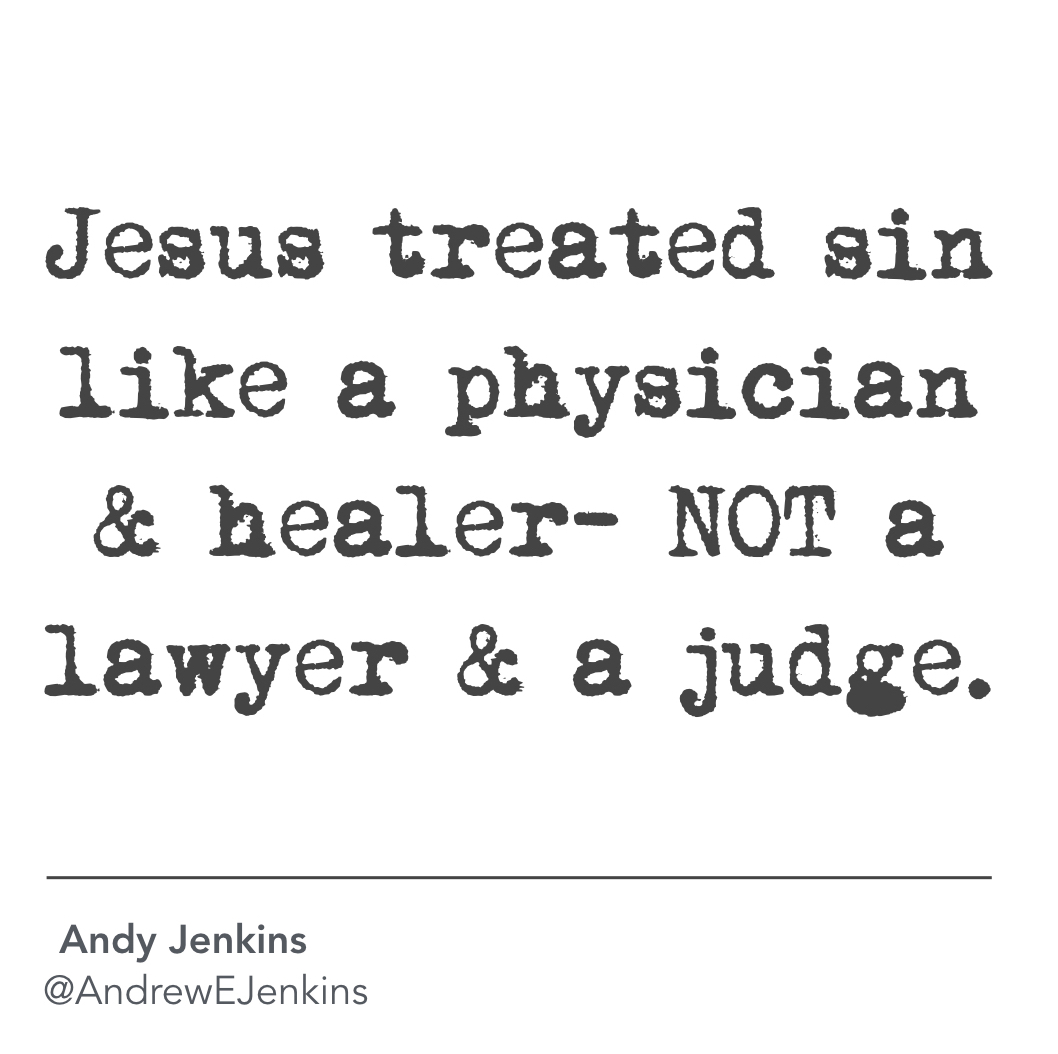 Because of the Lord’s grace, It is your destiny to reign in this life, too (Romans 5:17).

Links mentioned in this talk >>> 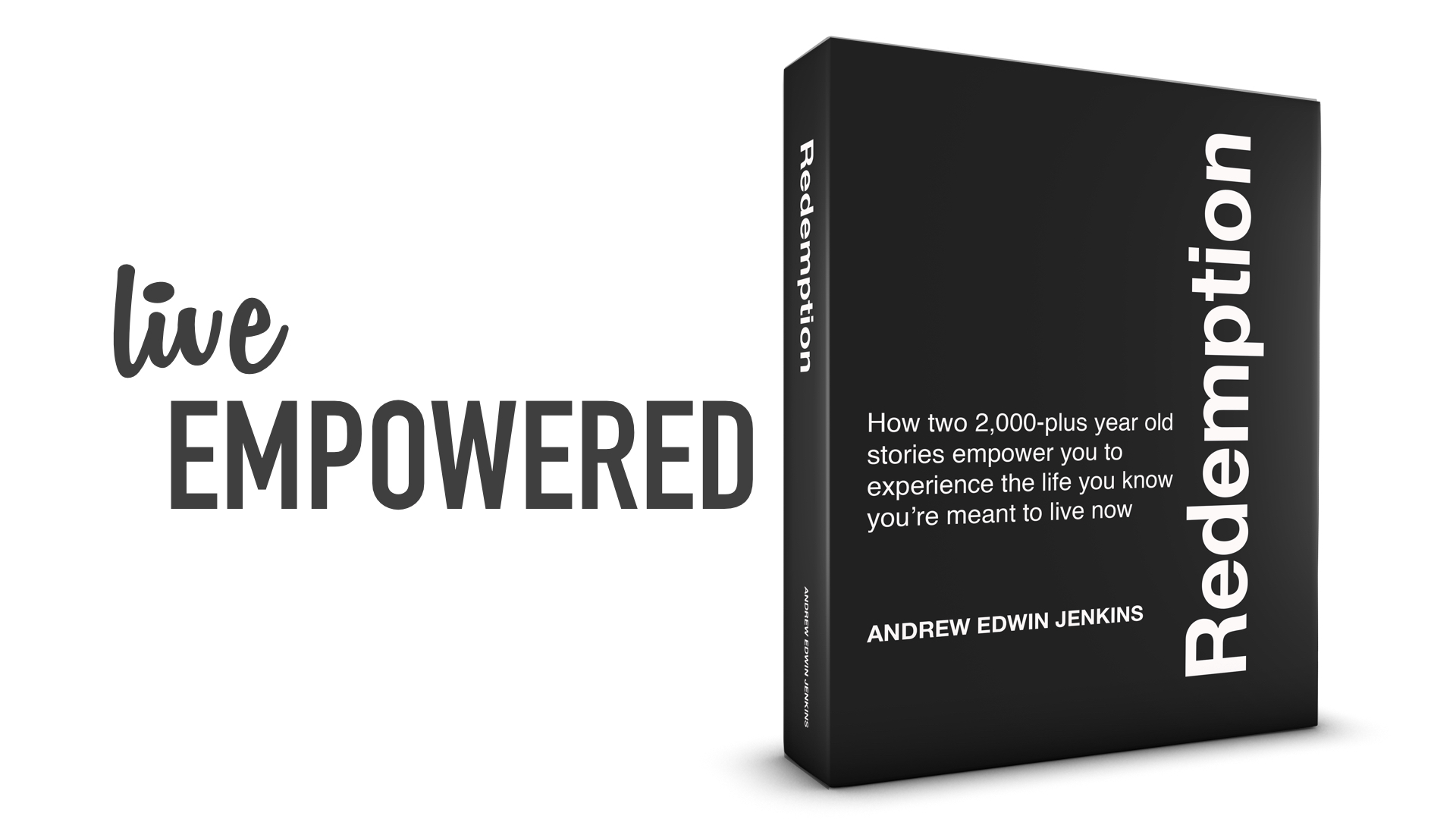