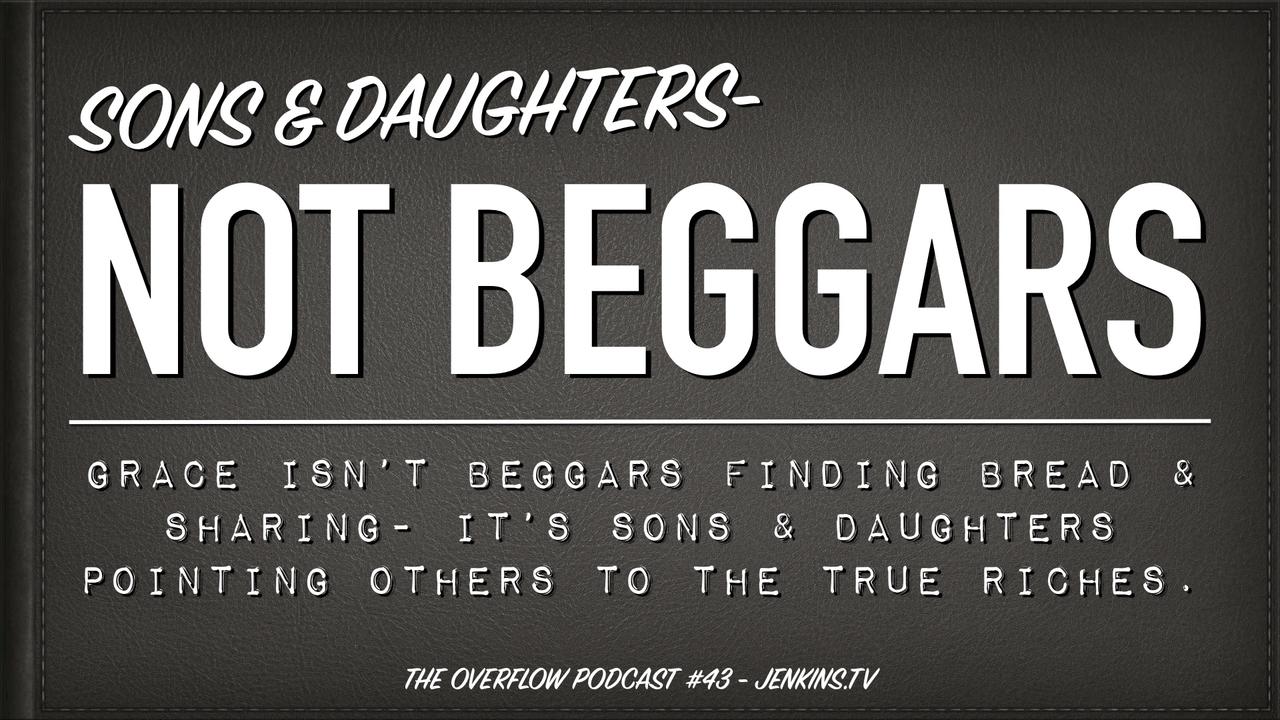 Someone told me that the Gospel is simply “one beggar telling another beggar where to find bread.”

On the surface, that sounds right. It connects to the idea that:

But, I was reading the Bible a few weeks ago and something struck me that’s given me a new way of looking at things…

I came to this conclusion: The Gospel of Grace isn't about one beggar finding bread and telling others where to find it. Rather, it's about sons & daughters awakening other sons & daughters to the reality of the true riches their Father has already provided for them... 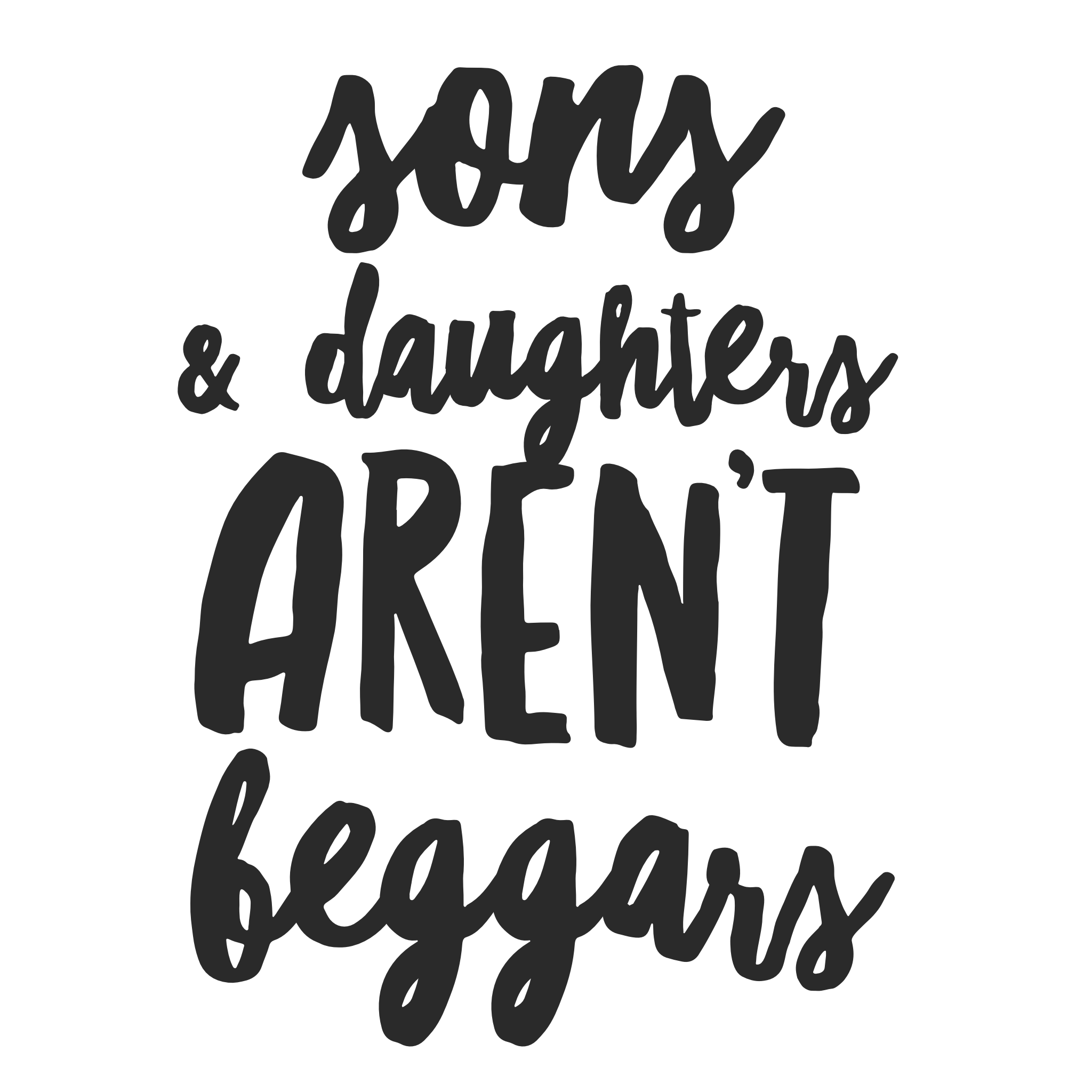 In 2 Kings 7 we read about Syria laying siege to Samaria. In ancient times, it was common for invading armies to surround a city and “block it.” No one come go in; no one could come out. Everyone was held hostage within the city walls. Well, everyone was sheltered behind the protection of the walls except for a handful of lepers- four of them to be exact (2 Kings 7:3).

Now, the city walls wouldn’t cover that vast of a geographical area. Most people lived outside of the city- only some of the elite would live inside. In fact, wealthy landowners with their own fiefs and smaller areas of rule might actually live outside the city.

Remember the story of Lot and Abraham? Lot first settled in the lush, fertile plains of the region surrounding Sodom and Gomorrah (Genesis 13:11). Later he moved near the city (13:12). Finally, he moved within the city walls (19:1f.).

It was common practice that MOST people didn’t live “inside” the actual city. This meant that cities tended to be smaller- even though they might serve a vast geographical area, acting as a hub for trade, religious observance, and government. There’s no way you could “wall” in everyone that was served by the city, right?

When Joshua led the Children of Israel to overthrow Jericho, his people marched around the entire city once a day (see Joshua 6:1f.). Then, on the final day they walked around it seven times (6:15).

(By the way, this is how Israel eventually fell to Babylon- Nebuchadnezzar "laid siege" to the city until they lost hope and gave up- see 2 Kings 25:1f.)

When an area was being attacked, it was common for everyone in the area to “cram” into the city, to hide behind the walls. It meant protection from the invading army for them, but it also meant that the supplies inside the city tended to diminish more rapidly with the increased load of people.

The crowds inside would swell…

It made an already stressful situation extremely daunting.

Hurry up and wait

At this point, the surrounding army had one strategy, wait. There was no need to outwit or outmaneuver those who were cloistered behind the city’s walls. All the invaders had to do was outlast them. In theory, this would be easy to do, given that they could just “rest” outside the walls.

This is what Syria did to Samaria in our story. They knew that every day they stood outside of the walls waiting was another day the pressure grew inside the walls.

It would turn into an ugly situation- fast!

As everyone crams into the city of Samaria to find protection, a handful of beggars find themselves outside the city walls, no doubt huddled as close as they could to those walls (2 Kings 7:3). Remember, lepers weren’t allowed inside- not even under these dire circumstances (see Leviticus 13:46, 14:3). People inside feared that they’d be made “unclean” by contacting them.

Whereas the people inside the walls had some shelter and food, the lepers outside had none. No doubt they’d been pushed from whatever sparse resources they had by the invading army.

At some point, they just got logical about the entire thing (2 Kings 7:4f.).

“We’re as good as dead,” one of them surmised. “We can’t go inside the walls- they won’t let us. If we stay out here, we’ll die outside the city gate.”

It was all true. That was their plight if they did nothing- death.

Then- “If we go to the Assyrians, they might kill us as we approach them. Better to die quick by an arrow or sword than to die a slow death by starving.”

Plus, remember, they’re in the Middle East without shelter. During the day, it’s incredibly hot. At night, it’s dramatically cold. And they’re lepers- their health is shot.

I imagine they were afraid to face either scenario. In this we see that faith, many times, is displayed where fear is actually present. Rather than living from the fear, though, we choose to live from faith. That is, faith is more clearly demonstrated when you have empirical evidence to respond with fear.

So they make their way to the Assyrians, willing to roll the dice with their fate. 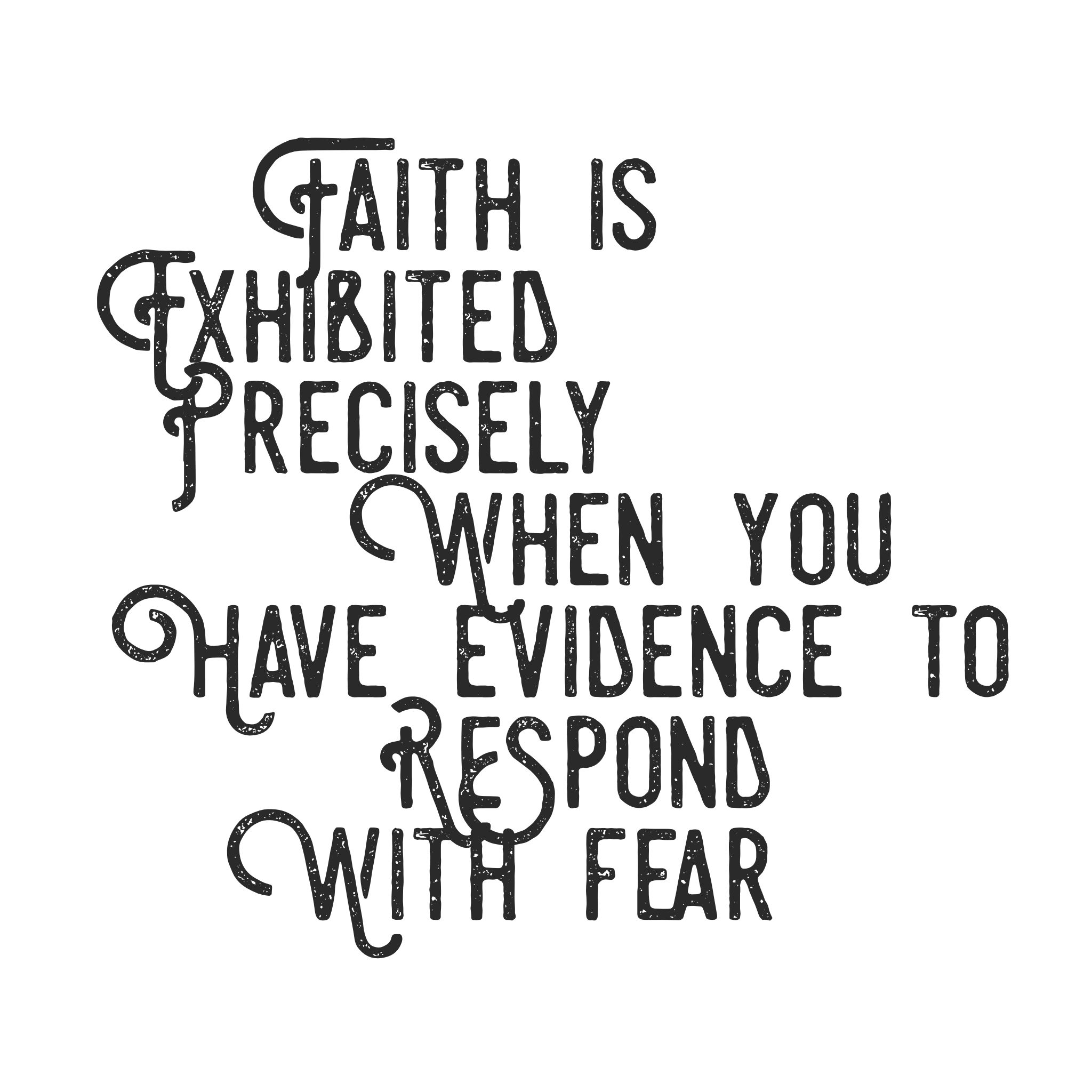 Meanwhile, back inside the walls…

Meanwhile, back inside, people wonder why God isn’t moving.

A prophet, Elisha, assures them that He is (7:1f.). And that by this time tomorrow evening, the price of the finest foods will be dirt cheap.

Of course, no one believes him.

As the beggars make their way to the Assyrian camp, they learn that the camp is…

Everyone has literally run for their lives- hurriedly- as if ANOTHER invading army scared them.

We learn from the text that they heard angels in the trees and scooted (not knowing they were angels), thereby creating a scenario where four lepers arrive upon the bounty of an entire army (7:6).

The lepers enjoy their newfound treasure… for the day.

But then it hits them, “We can’t do this. Everyone in the city will die if we don’t let them know that it’s safe to come out."

They were exactly right. No opposing king was there to send a diplomat to offer peace terms. Yet no battering ram was going to move against the city, either. The Israelites would have been stuck inside… waiting… indefinitely.

So the lepers to back to the city walls, hurl the message over the walls, and everyone enjoys the bounty. Everyone except the naysayers that it. 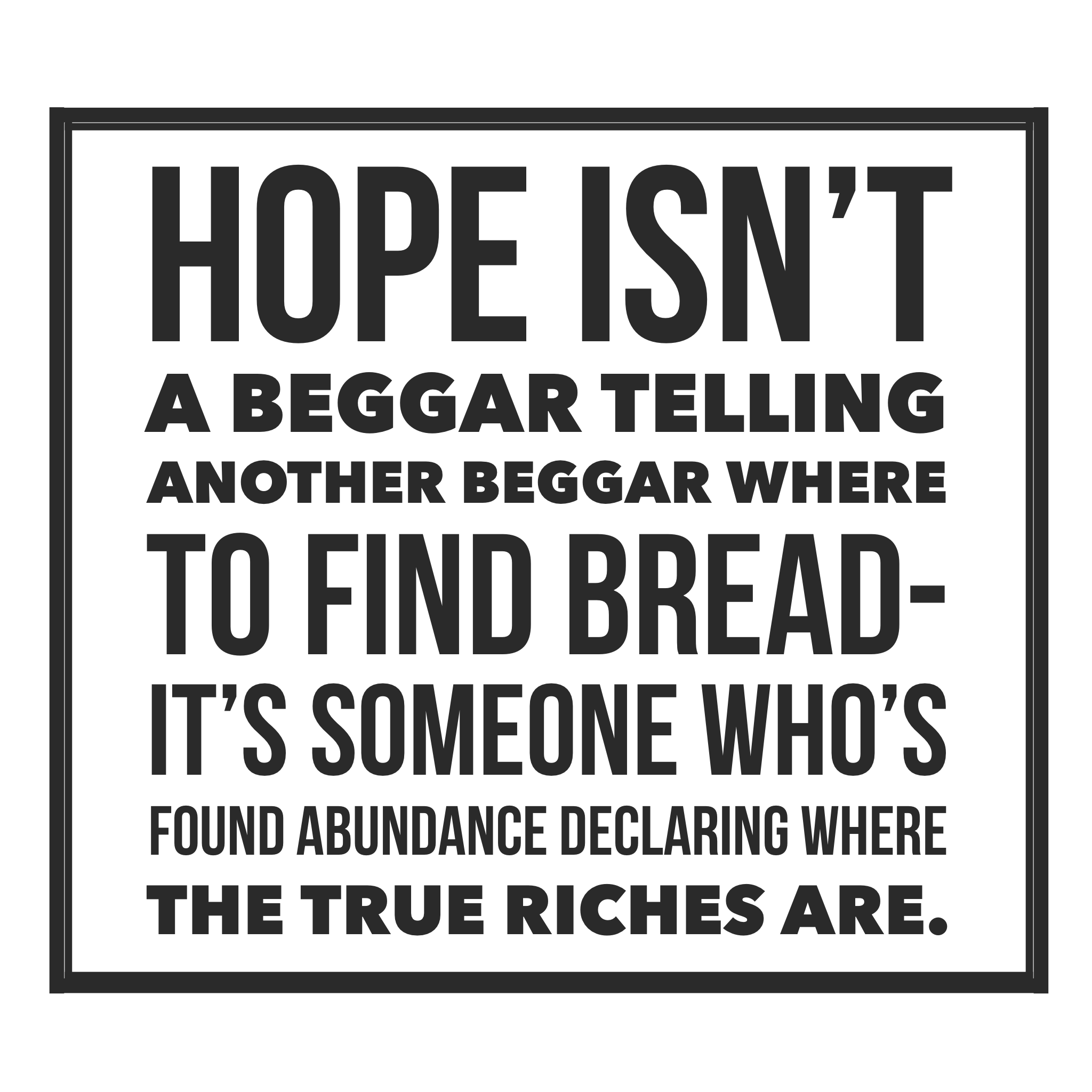 First, if this story is emblematic of the Gospel, it shows us that the message of grace isn’t at all about one beggar- or even a group of beggars- telling others where to find bread. Rather, it’s about a group of people who’ve found true riches giving others hope by showing them where to find those riches as well.

We sons and daughters of the king?

Or are we outsiders, bystanders…?

I mean, did Paul REALLY mean it when he asked, “He who did not withhold His son from you, how will He not freely give you all things?” (See Romans 8:32.)

Will He or won’t He?

And did not God pour HIs Holy Spirit in our hearts to resonate this truth with us, that we are immensely loved and relate to Him as Father (Romans 5:5)?

Second, this story shows us (again) that redemption is connected to life now. Grace isn't not (just) about “what happens when you die.”

The people in this story didn’t want to die- they wanted to live. The message of Jesus, the hope to which we’ve been invited to live, is a message for (then and) now.

What does it mean? Well, the Gospel changes everything.

By the way, the word Gospel means “too-good-to-be-true-but-still-true” news. No begging required. 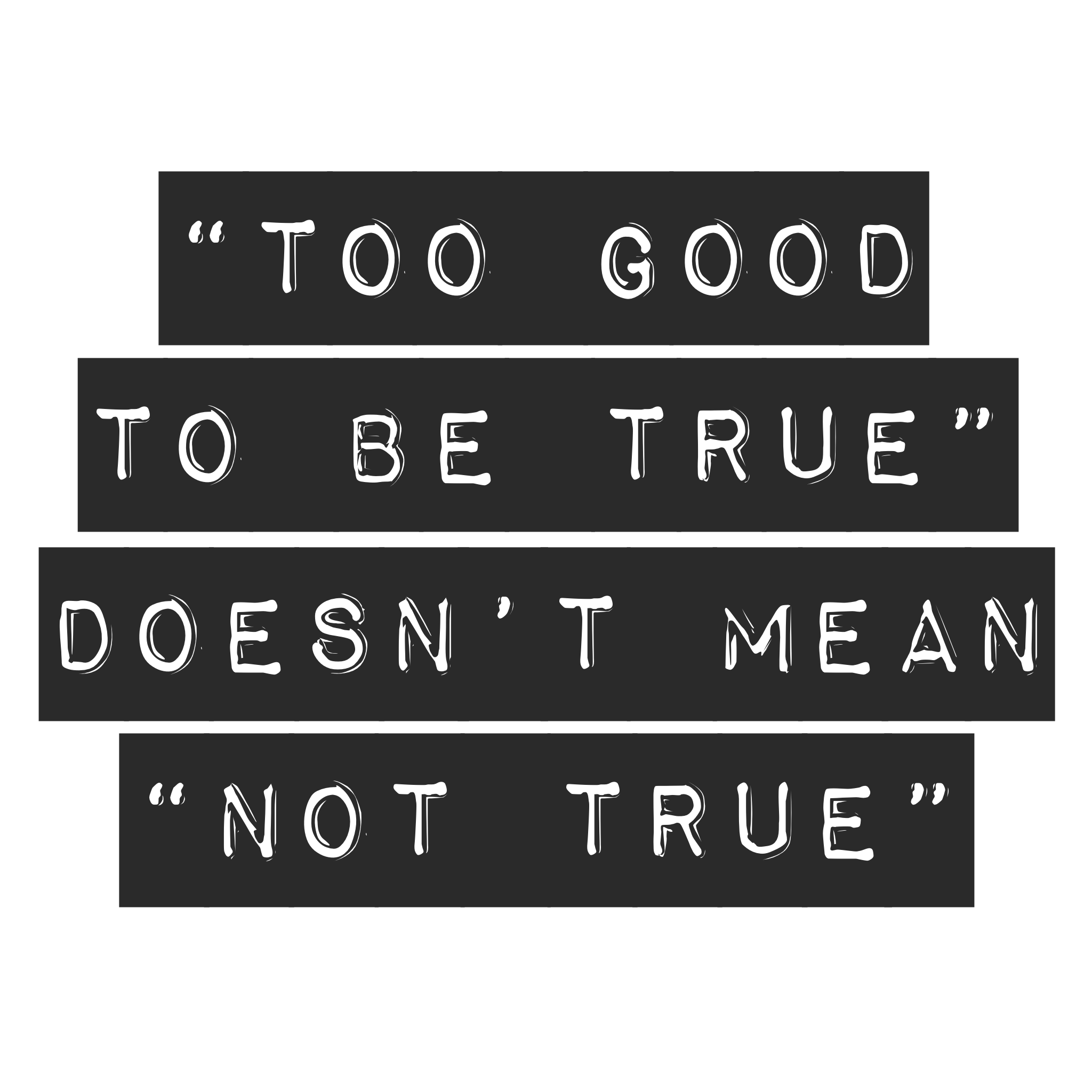 Episode 18 of the podcast, “Freedom is now.” Go to https://www.overflowfaith.com/blog/18

Episode 5, “The Blessing of Abraham.” Go to https://www.overflowfaith.com/blog/05