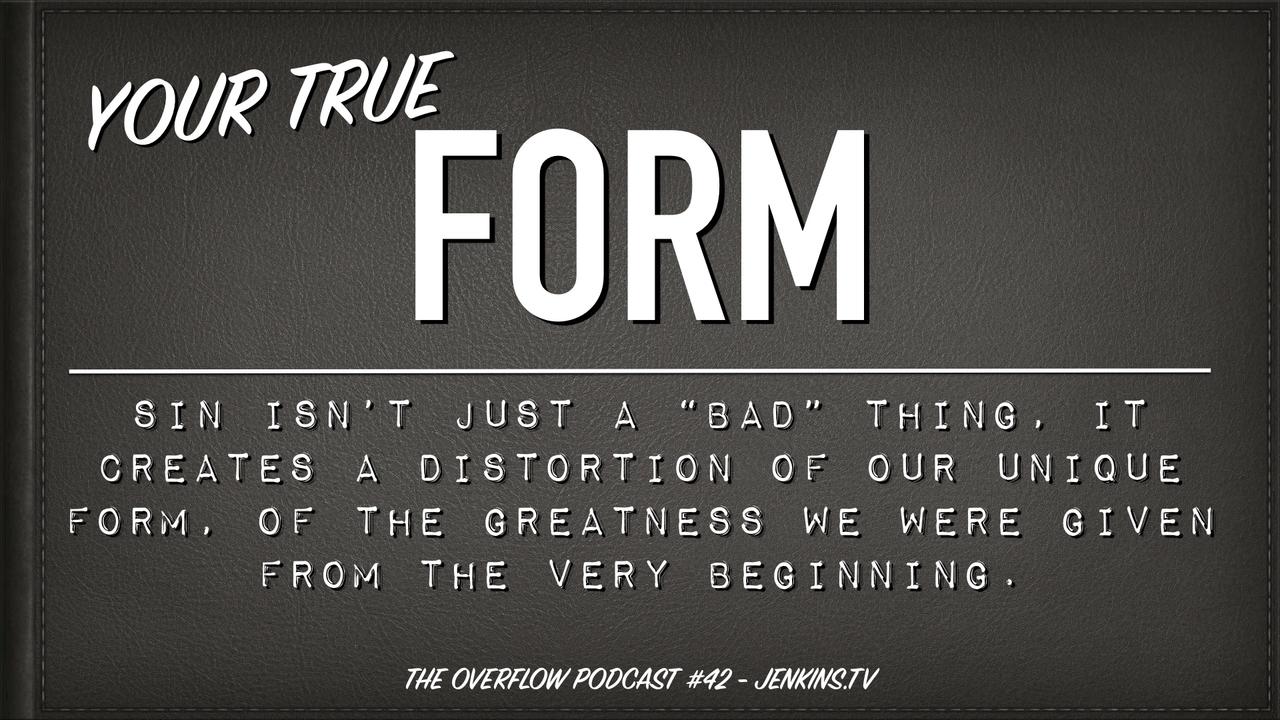 Sin isn’t just a “bad” thing, it creates a distortion of our unique form, of the greatness we were given from the very beginning. In other words, it's not about legality (Jesus settled that a long time ago: it's about your creative design.)

No, sin isn’t just a “bad” thing, it’s far worse than that. In fact, the more I study the topic, and that more I gaze at the Father’s grace, the more I believe that the “moral” aspect of sin is the “least” important aspect of it. The greater issue is this: sin creates a distortion of our unique form, of the greatness we were given from the very beginning.

I know- that sounds like an odd way to present a topic that’s usually presented as a right/wrong legal-type of standing we have with God. There’s more to it, though.

(I know, too, the opening of this sounds harsh... you're used to radical grace here. Trust me... read on and you'll get a huge dose of it in a moment.)

Read on and see if this makes sense to you…

In Romans 3:23 (probably one of the most widely known and often-quoted Bible verses in the Church), Paul tells us that everyone has sinned. That’s right, everybody.

The first thing I want you to notice about this verse is this: the second half of the verse. 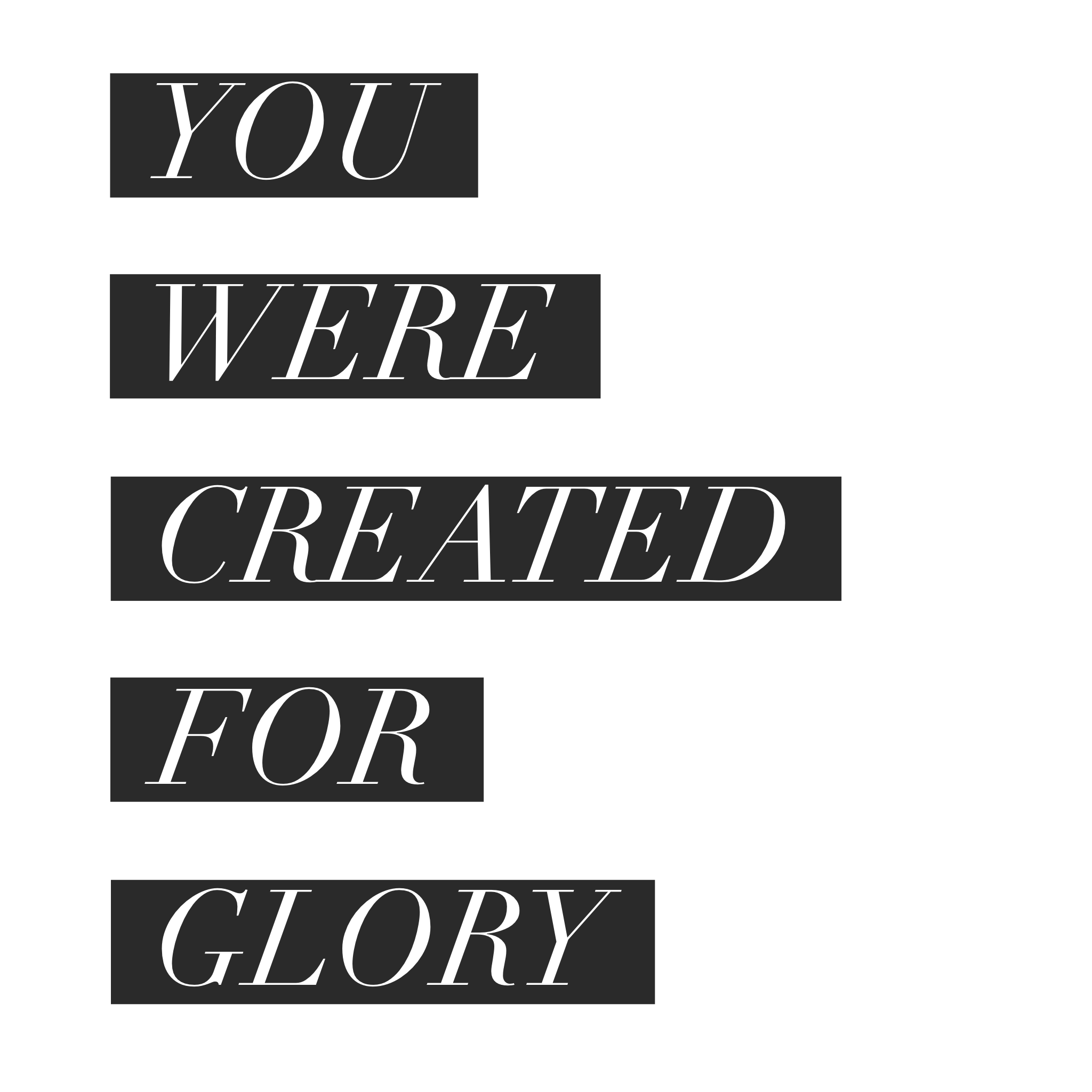 A few years ago, during the opening remarks of his Open Heavens conference, Bill Johnson (Bethel Church, Redding, CA) said something like, “Everybody knows Romans 3:23. He reminded everyone, “You can probably quote it right now…  All have sinned and fall short of the glory of God...”

You know that verse- I just referenced it. You already knew it though, right?

Bill highlighted that although we often focus only on the first half of the verse, we need to keep both halves of the verse in mind when we read it.

“Notice,” he said. “You were originally destined for glory. Glory is God's intention for you.”

“Moses reflected the glory that came to Him- God’s glory that shone on him. He absorbed it and it was visible to everyone around him” (See Exodus 34:29, 2 Corinthians 3:16-18).

He then explained that because “Christ in you is your hope of glory” that we have an unprecedented opportunity (Colossians 1:27). “You’re in an era, because of the Cross… and because there’s nothing the Cross did not resolve permanently… whereby Isaiah actually calls you to something incredible…”

He took the crowd to Isaiah 60:1, where the prophet encourages us to “Arise and shine, for your light has come.”

Bill elaborated, “Notice that this verse doesn't say to reflect God’s glory- as if you’re simply transmitting something that’s not your own. Rather, it says to shine it. You possess that glory. It's part of who you are.”

The glory is your new identity. It's who you are.

We often carry labels from our past experiences- as well as names we’ve been called, the titles we’ve been given. And, let’s be real with one another about it: sometimes, the worst critic is the one inside our head…

The message the Cross is, “No. That may have been who you were, but you’re different, now. Things have changed. Your condemnation is gone. You’re now free to be the person you really are…”

Paul describes it this way: “You shine like stars in the universe” (Philippians 2:15).

Let me remind you that stars shine, they don't reflect. The moon, for instance, simply reveals whatever light from the sun it faces. On its own, it’s cold and dark. Hence the phrase “the dark side of the moon.”

The sun is a star. It is its own source of fuel, and its radiance comes from within.

So it is with you. You don’t simply reflect God’s glory; you possess it. You shine it.

It’s who you are…

What is this "sin," anyway?

I’m guessing that you probably haven’t heard it presented that way before. Perhaps we should dig deeper, then, because if the result of sin is that we we miss the glory for which we’re created, it might help to define what this “sin” actually is, right?

The word for “sin” is hamartia in the Greek. When we break it down we get this:

Ha, the prefix, means “without.” That is, something is missing. We lack something that we need…

Furthermore, we actually sense this lack.

The first part of this verse, then, actually says, “All are without… all are lacking…”

Martia, the second part of the word, comes from the Greek word meros. What’s a meros? It’s a “form.”

Put the parts of the word together and we get this: “All of us are lacking our form… we’re lacking our design… we’re without who we were created to be.”

(And, remember, we were created to experience glory.)

This sounds a lot less legalistic than we usually define the word sin, doesn’t it? And, this definition actually describes the plight of most people today…

You’ve heard each of these phrases before. If you’re like me, you’ve said them- more than once.

Whenever these statements (or statements similar to them) appear, we’re resonating with the truth that Paul says: We’ve stepped away from who were were originally designed to be. We’ve moved from “glory” to “not enough.” 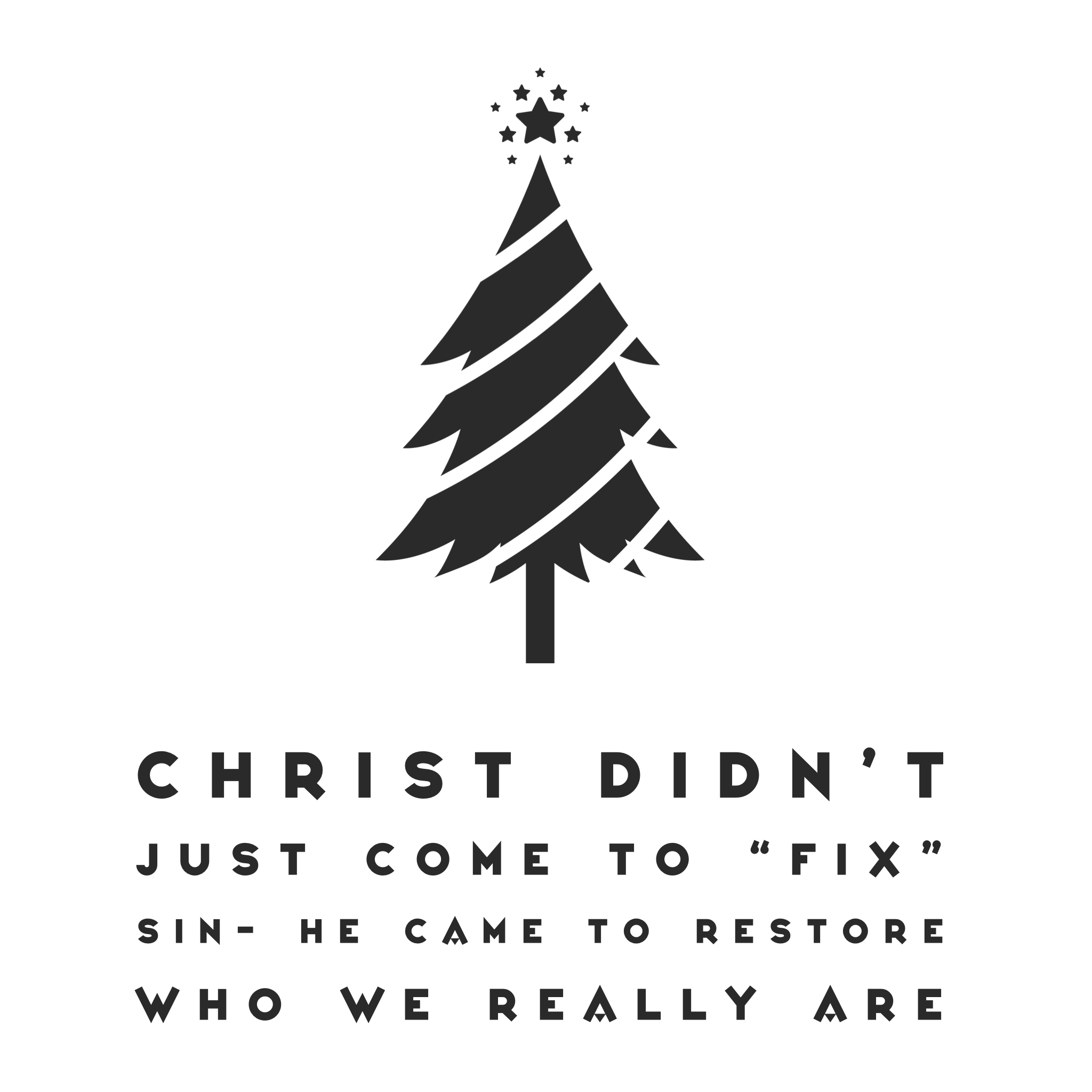 The art of you

Here’s where it gets really interesting…

When Paul described how you were created, He actually said it like this: “[You] are His workmanship… created for good works He planned before hand [before time began] that you would walk in" (Ephesians 2:10 ESV).

I want you to see a few things from this verse.

First, you are a workmanship, an individual creation. You're not a mass-produced assembly-line kind of creature. You're unique.

The word “workmanship” here is the Greek word poema, a word used of art, craftsmanship, and poetry. It’s the imagery of a master-designer creating something extraordinary. Intentionally. With His hands.

We see imagery like this throughout the Bible- that God is the Potter and we're the clay. And that He's crafting us, molding us... shaping us into something exquisitely wonderful.

Notably, too, this verse about “workmanship” is part of the same thought as Ephesians 2:8 (8-10 ESV):

For by grace you have been saved through faith, and that not of yourselves; it is the gift of God, not of works, lest anyone should boast. For we are His workmanship, created in Christ Jesus for good works, which God prepared beforehand that we should walk in them.

Paul is saying that the same grace that transforms you from sin to light is the exact same grace that has a destiny for you. Your salvation and the purposes you walk in are not separate concepts. God doesn’t give you the one (forgiveness) without providing you with the other (your destiny of glory).

In some sense, we understand grace. True, we may not grasp the full measure of grace in our lives, but we realize that we bring nothing to our salvation, that Jesus does it all.

In equal part, that same grace doesn't just redeem us, it actually empowers us… it empowers us to walk back into who we were originally intended to be… to embrace our unique form and live it.

By the way, notice the Paul says God planned all of this “beforehand.” Most Bible commentators suggest this means that God ordained your uniqueness before time began.

David, the guy we studied in the previous chapter, realized that God intentionally created him (Psalm 139:13 ESV):

For you formed my inward parts; you knitted me together in my mother's womb.

Jeremiah, one of the Old Testament prophets, said that God not only designed him on purpose, but that God had a unique destiny for him. God literally “set him apart” (Jeremiah 1:5 NIV):

Before I formed you in the womb I knew you, before you were born I set you apart.

Isaiah reminds us that the same God who created the cosmos is the One who created us. This leads many commentators to believe that God had a plan for you not only before you were born but before time began (Isaiah 44:24 ESV):

Thus says the Lord, your Redeemer, who formed you from the womb: “I am the Lord, who made all things, who alone stretched out the heavens, who spread out the earth by myself.

Paul, the most quoted New Testament author, reminds us that it’s God’s love that does all of this (Galatians 1:15 ESV):

But when he who had set me apart before I was born, and who called me by His grace… 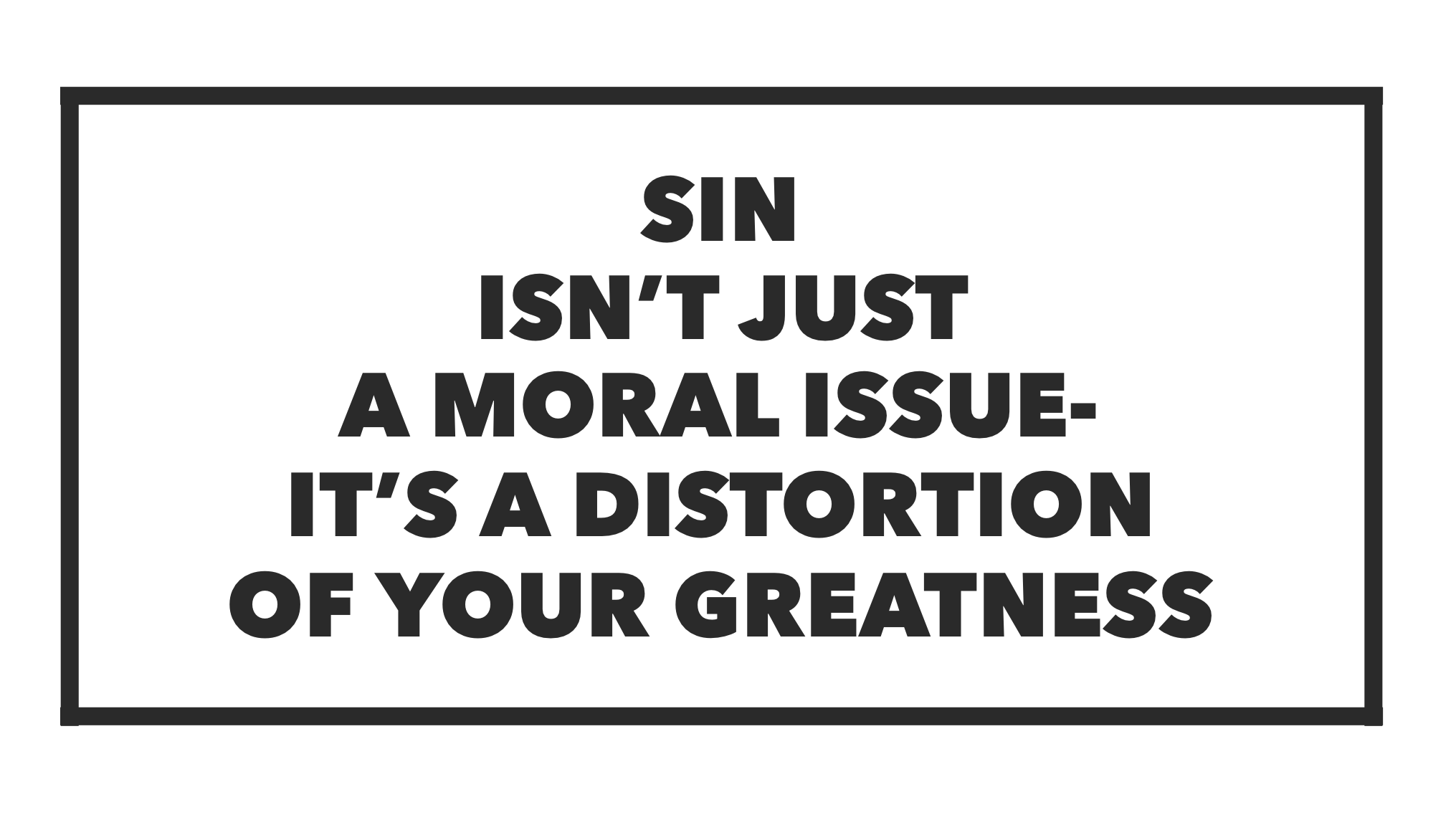 Now, if believe all of that, it makes sense that Paul told the Galatian church that he “travailed,” like a mother in birth pangs, until Christ was formed in them (see Galatians 4:19). To him, their spiritual awakening was akin to something like a new person being born (which is, really, how the Scripture portrays it- that an old self dies and a new one comes alive!). In other places,

Paul wrote about being… get this… transformed. (I love how that word closely relates to meros and “form.”)

Of course, Paul said the way to begin this process was by renewing your mind (Romans 12:1-2).

He also calls the church to remember their form, to recall who they were designed to be (Romans 15:15).

In ancient literature, this word choice is often used of blueprints- of designs for buildings. If the design isn’t solid, the final product is distorted from what was intended by the architect.

Paul reminds us that we have a perfect design. Sin isn’t just a moral issue, then; sin is a choice to walk away from that design.

I can’t tell you how many times I had a joint in my hand and thought, “There’s got to be more for me than this.”

I can’t describe how often it ran through my head- like a filmstrip- that if I’d just done a few things differently I’d be in a different place... doing something different than I was in that moment, that things might have turned out better...

That tension- and perhaps you’ve felt it- is that I knew I’d missed my form. I was living a distorted version of who I really was.

I love how, rather than appealing to a legalistic “do vs. don’t” mentality, Paul calls us to something greater… to elevate ourselves above the rules of right and wrong and walk in the beauty of who we were designed to be.

You're a living poema, a poem, a living creation... a work of craftsmanship, intentionally designed for some amazing purpose. You’re someone with a unique meros, a form that’s unlike any one else.

That, my friend, is the issue with sin.

It’s not about legality. Jesus settled that a long, long time ago.

It’s about design. You were created for more :-)

For more info  on links mentioned in this talk >>>

Listen to the talk on "Glory," (episode 1 of the podcast): https://www.overflowfaith.com/blog/01

Listening + subscribing options for the podcast